Depending on the trim you choose, a Jeep Wrangler can carry between 997-1,351 pounds of payload. That means you can fill the Wrangler up with five people and still have room for some gear in the back. However, you should still be mindful of how much weight you're carrying, as it can affect the Wrangler's performance on and off the road.

Understanding the payload of your Jeep Wrangler is vital when packing up for a long trip or going off-roading. In this article, we will discuss how much payload a Jeep Wrangler can carry. In addition, we will answer other frequently asked questions about the Jeep Wrangler, so read on! 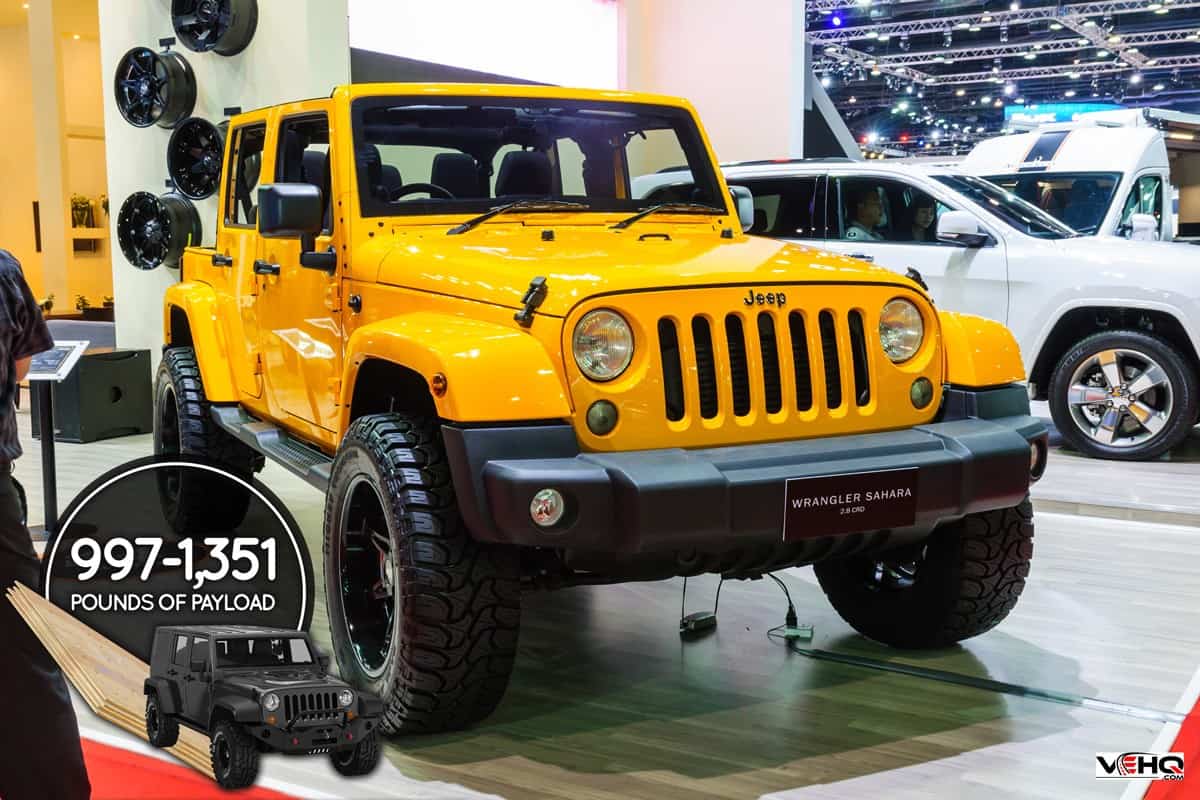 What Is The Jeep Wrangler's Payload Capacity?

Meant for both on and off-road driving, the Jeep Wrangler is a versatile vehicle that can handle a variety of terrain. With its four-wheel drive and high ground clearance, the Wrangler is equipped to take on whatever mother nature throws its way.

Whether you're driving through snow, mud, or sand, the Jeep Wrangler can get you where you need to go. Since it's made for off-roading, the Wrangler has a variety of accessories you can add to make it even more capable, such as a winch, tow hooks, and skid plates.

However, as you add these accessories and gear, you need to be aware of the Wrangler's payload capabilities. The payload capacity of a vehicle is the maximum amount of weight it can carry, including passengers and cargo.

Jeep Wranglers have a payload capacity ranging from 997-1,351 pounds depending on the trim you choose. That means you can add accessories, gear, and five passengers to the Wrangler and still be within its payload limit.

However, it's important to note that the more weight you're carrying, the more it will affect the Wrangler's performance. If you are a person who is serious about off-roading and takes a lot of gear with you, it might be worth considering a Jeep Wrangler with a higher payload capacity.

The two-door Wranglers are going to have a lower payload capacity since they're smaller and don't have as much space. Nonetheless, it depends on what you use your Wrangler for. If it's only a daily driver and you don't take it off-roading often, then the two-door model will be just fine. 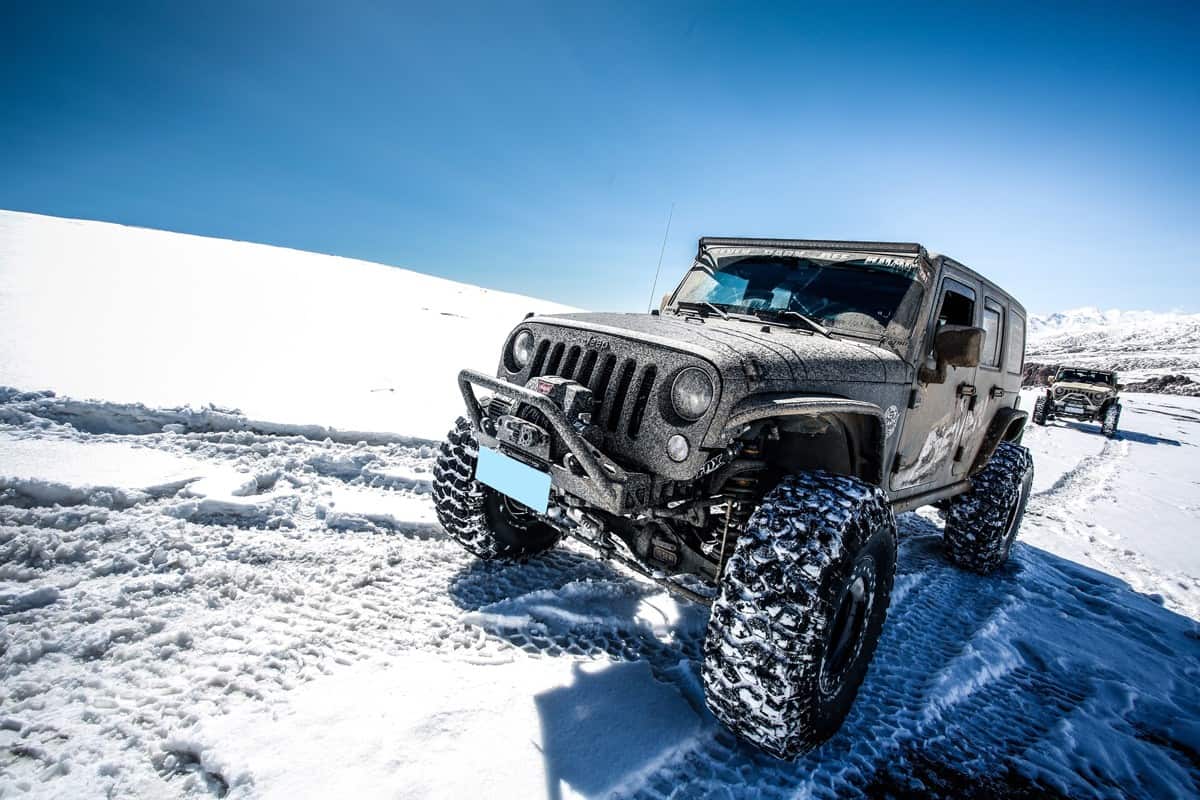 What Happens If You Exceed The Payload Limit?

Without the engine, your Jeep Wrangler would be nothing more than a paperweight. The engine is responsible for powering the Wrangler and making it move. When you exceed the payload limit, it puts additional strain on the engine, which can lead to problems.

This is due to the engine having to work harder to move the extra weight. As a result, it can overheat and eventually break down. In extreme cases, exceeding the payload limit can cause the engine to catch fire.

To avoid putting unnecessary strain on the engine, make sure you don't exceed the payload limit of your Jeep Wrangler.

Just like with the engine, exceeding the payload limit can cause problems with the transmission. The extra weight puts additional strain on the transmission, which can lead to it slipping or even breaking.

If the transmission slips, it means the engine is revving, but the vehicle isn't moving. This can be extremely frustrating and could even lead to an accident if you're trying to merge onto a busy highway.

The suspension's job is to provide a smooth ride, no matter what type of terrain you're driving on. It does this by absorbing the impact of bumps and potholes.

However, if your Jeep Wrangler is overloaded, the extra weight will push down on the suspension, causing it to bottom out. When this happens, you'll feel every bump and pothole, no matter how small.

Not only is this extremely uncomfortable, but it can also damage the suspension. If the suspension is damaged, it will need to be replaced, which can be quite expensive.

The heavier your Jeep Wrangler is, the harder the brakes have to work to stop the vehicle. Think of a boulder rolling downhill. The heavier the boulder, the more force it has and the harder it is to stop.

The same is true for your Jeep Wrangler. If you exceed the payload limit, the brakes will have to work overtime to stop the vehicle. This can lead to brake fade, which is when the brakes start to lose their effectiveness.

When your Jeep Wrangler exceeds the payload limit, the extra weight puts additional strain on the tires. The tires have to work harder to support the vehicle, which can cause them to wear out more quickly.

In addition, the extra weight will cause more friction, which can lead to the tires overheating. If the tires get too hot, they could blow out, which could be extremely dangerous.

Tires aren't cheap, so if you frequently load your Jeep Wrangler beyond the payload limit, you'll end up spending a lot of money on tires.

Lastly, your fuel economy will suffer if you exceed the payload limit. The extra weight will cause your Jeep Wrangler to use more fuel, which will cost you more money at the pump.

While this isn't a deal breaker for most people, it's something to keep in mind if you're trying to save money. 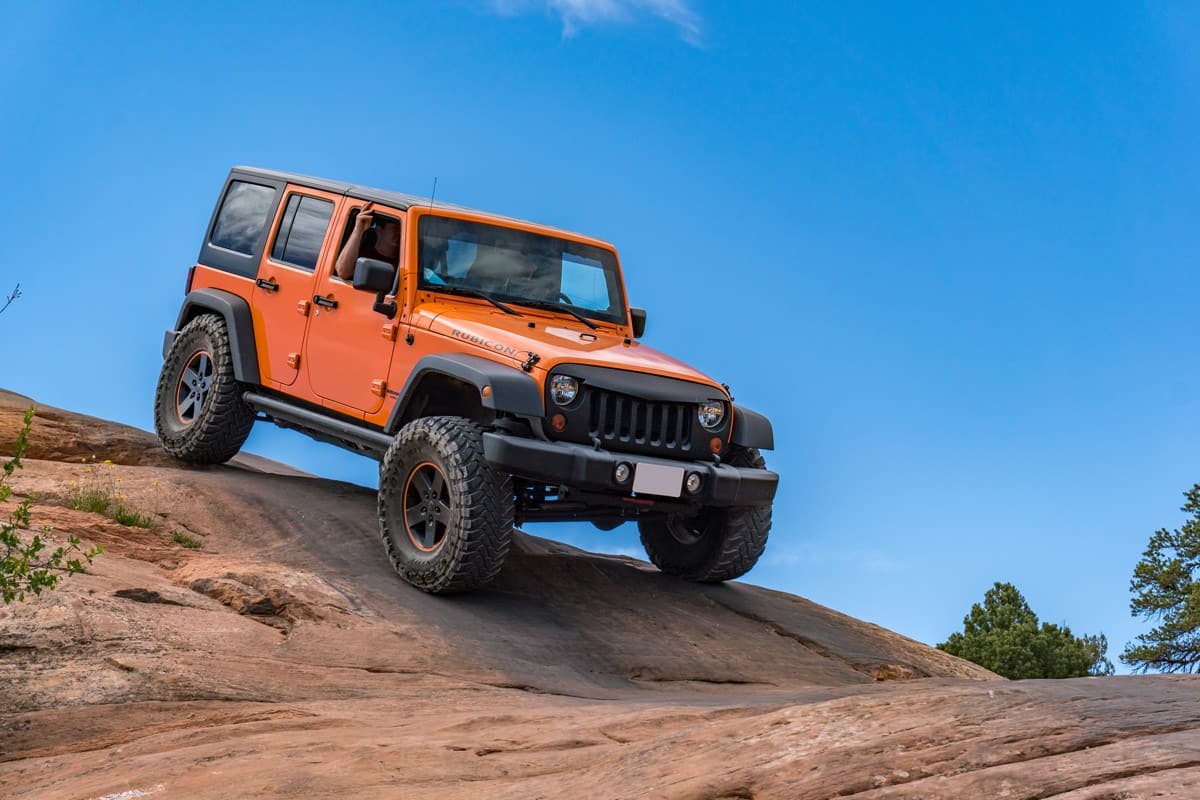 Can You Increase Payload Capacity Of A Jeep Wrangler?

There are ways to increase the payload capacity of your Jeep Wrangler. The first way to do it is by removing unnecessary items from the vehicle. If you don't need it, get rid of it.

For example, you can remove seats, bumpers, or other parts that you don't need. You can also opt for light replacement parts. For example, instead of a steel bumper, you could get a lighter-weight carbon fiber bumper.

Another way to increase payload capacity is by getting better coils. Coils are responsible for supporting the weight of the vehicle. If you have better coils, they will be able to support more weight.

While these modifications won't give you an unlimited payload capacity, they will give you a little more leeway.

How Can You Tell If Your Jeep Wrangler Is Overloaded?

Since you can't put your Wrangler on a scale, how can you tell if it's overloaded? There are a few signs to look for.

One sign is how the vehicle is handling. If you're driving down the road and your Jeep Wrangler feels like it's wobbling, that's a sign that it's overloaded.

Another sign is how the engine is running. If the Wrangler isn't accelerating like it normally does, is overheating, or is making strange noises, that's a sign that it's overloaded.

In addition, you can tell your Jeep Wrangler is overloaded by how it looks. If the backend is sagging, then it is a sign you have too much cargo weight.

If you notice any of these signs, it's important to remove some weight from the Jeep Wrangler.

Does Tongue Weight Count Against The Payload?

The tongue weight is the weight of the trailer tongue that's hanging off the back of the vehicle. In other words, it's the weight that is on the hitch.

The tongue weight does count against the payload. This is because it is weight pushing down on the back of the vehicle.

The tongue weight is another thing to consider if you also have cargo in the back of the Jeep Wrangler. If you have a lot of tongue weight, it's important to remove some of the cargo from the back to keep within the payload limit.

How Fast Can A Jeep Wrangler Go? [Maximum Speed Revealed]

What Are The Biggest Tires You Can Put On A Stock Jeep Wrangler?

How To Engage 4 Wheel Drive In A Jeep Wrangler