Many mid-sized cars have the ability for the rear seats to be folded down, opening up this seating area directly into the trunk of the car. These vehicles allow for longer objects to be carried and can eliminate having to borrow someone's truck or SUV to move certain objects. If you own a Chevy Malibu and are wondering how to fold down its back seat, we can help you. We researched this popular vehicle from multiple professional sources so that you'll know for sure how to do it, step-by-step.

The back seats of the Chevy Malibu can be folded down by following these steps:

Now that you know the steps you need to take to fold down the back seat in the Malibu, we'll go into more detail on each step. You might also be wondering how the passenger seat in this car can be moved, or how much room there is in the Malibu with the back seat folded down. For the answers to these questions and more, read ahead in this post to see what our research has uncovered. 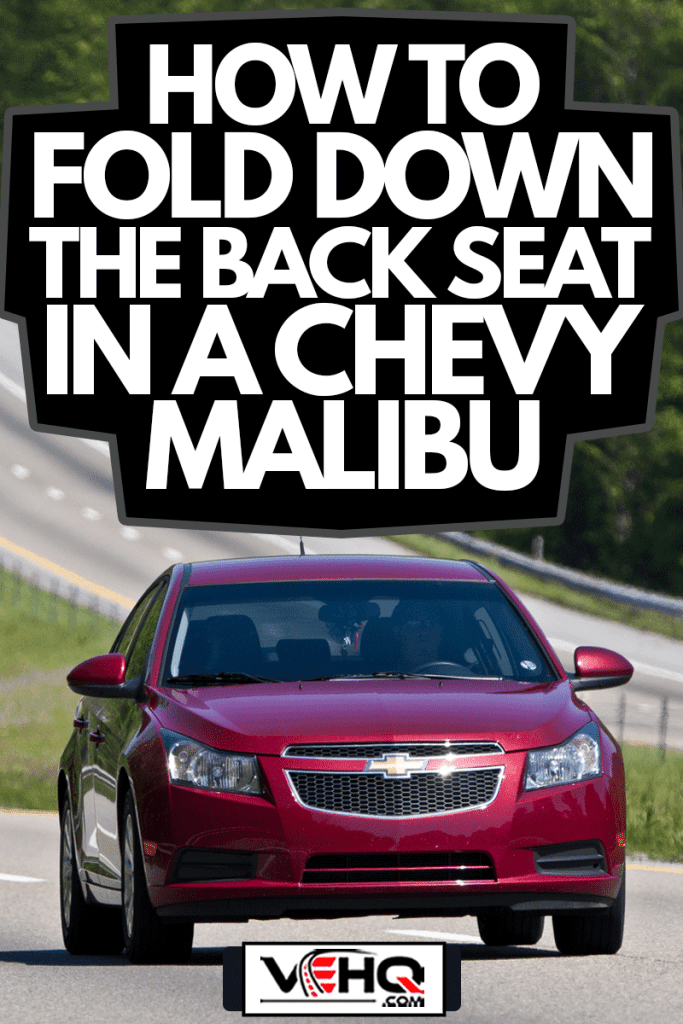 Should you need more detail on how to fold the Malibu's rear seats down, we'll expound upon the above steps here. Read ahead to see how to fold them back up again.

Each rear seat will have a seat headrest/restraint. These need to be lowered all the way in order for the rear seats to be properly folded down. This is easily done by locating the button on the top of the seatback. While depressing this button, gently lower the headrest.

Note that these headrests can be taken out entirely by depressing the button and lifting the headrest all the way out.

Firmly grasp the center armrest, and carefully raise it so that it is moved all the way back up.

For this step, you'll need to open your trunk. On either side of the open trunk is seatback release levers. Carefully pull one, then the other. This will unlock the seats so that they can be moved.

Going back into the rear doors of the Malibu, gently grasp one rear seatback. Move it forward and down. Repeat for the other seat.

Adjust the headrests back into their prior position and you're all set! 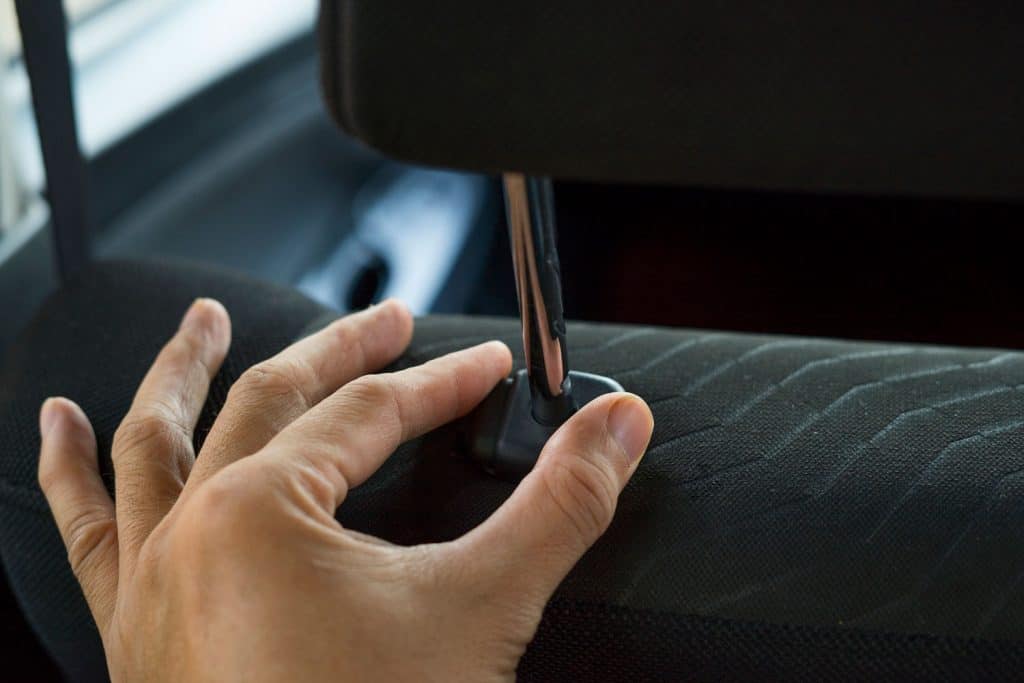 How do you move the passenger seat of a Chevy Malibu?

Passenger seats will most likely need to be moved into a different position each time a new rider sits there. Thankfully, your passenger will have an easy time figuring out how to move this seat into the desired position. Should your Malibu have powered seats, the process is as follows:

Slide this control forward or rearward, until your seat is in the desired position.

Next to this control is a button that will allow for adjusting the recline of the passenger seat. Move it forward to move the seat forward, move it back to further recline it. Be sure to never drive with this seat reclined back all the way, as the airbag will cause injury in the case of a crash.

Using the same control as the seat adjustment, slide it up or down. This will raise or lower the seat until it is in the position most comfortable for your passenger.

Some newer model Malibus will have trim levels that include lumbar support buttons. This feature will add to your level of comfort and are easily accessible. The controls are located on the inboard side of the front seat, the buttons closest to the seatback itself. Toggle this button back and forth to control how much support you desire.

How do you manually move a Chevy power seat?

So, what if you don't have power seats? Moving the seats of the Malibu to a spot where they are the most comfortable is still an easy process.

On the front of each front seat, there is a handle located just below. Pull it up, and you'll be able to scoot the seat forward or backward until it is where you need it to be. After getting it into the position you want it in, let go of the handle. Then, rock the seat gently forward and backward to make sure that it is locked into place.

On the inboard side of each front seat is a lever. Pull it gently up and you'll free the catch, allowing you to move the seatback forward or backward. Once the seatback is in its desired position, let go of the lever and the seatback will lock into place again.

Should you need to adjust the height of either front seat, locate the lever on the outboard side of the seat. Pull it up to raise the seat or down to lower it. Release the lever once you have the height where you want it, and it will lock that position into place.

How much room is in a Chevy Malibu with the back seats folded?

While you'll be decreasing the rider occupancy from five to two when you fold the back seats down, you will greatly increase the cargo room. Taking into consideration that the trunk space is already ample, you'll find that opening up the rear seats to this area allows for longer and more cumbersome objects to be carted around.

As the total available passenger space for the Malibu is 102.9 cubic feet, the rear seating area would account for about half of that. With the seats folded down properly, you will add nearly 50 cubic feet for storage, giving you an estimated total of 67 cubic feet.

How big is the trunk space in a Chevy Malibu?

The trunk space in the 2022 Chevy Malibu is 15.7 cubic feet. This is a bit above average for a mid-sized car. It is more than enough room to carry five large suitcases, making the Malibu a good consideration for traveling.

As we pointed out earlier in this post, you will be able to carry longer items if you fold the rear seats forward. Follow the steps we listed earlier, and you'll be able to increase your cargo volume in no time at all. 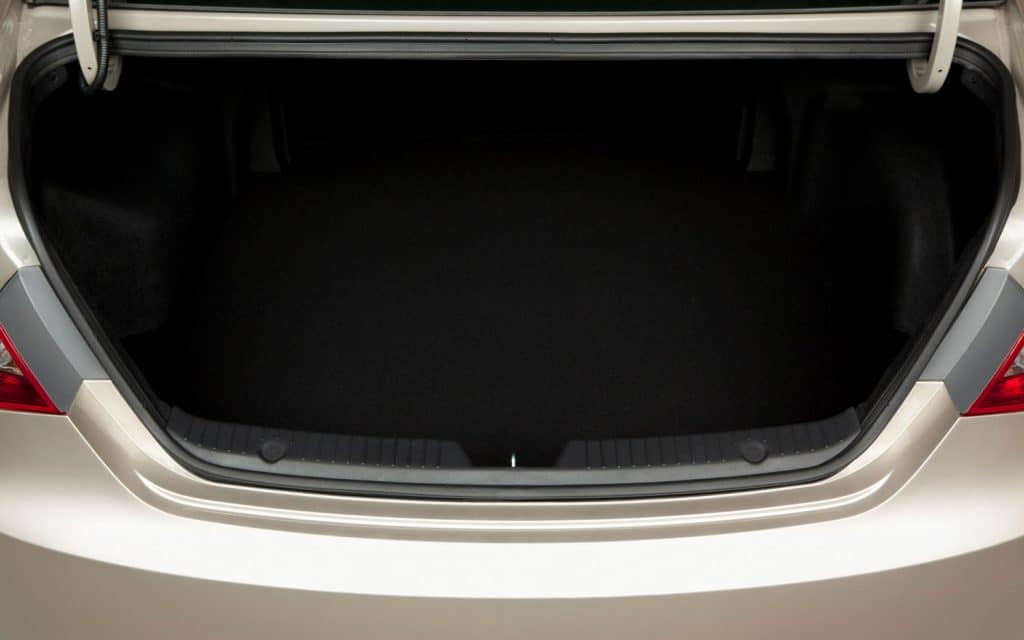 The Chevy Malibu has rear folding seats that greatly increase the amount of cargo that you can carry onboard. Getting these rear seats to fold down is an easy process, as is the process for manually or electronically adjusting the front seats. Follow the steps from this post, and you'll be riding in comfort in no time. Drive safe!

If you found this post on the Chevy Malibu to be helpful, we believe you'll enjoy reading the following posts about this popular automaker:

Are All Chevy Suburbans The Same Size? [Which Is The Largest?]

Chevrolet Silverado Gauges Not Working – What Could Be Wrong?