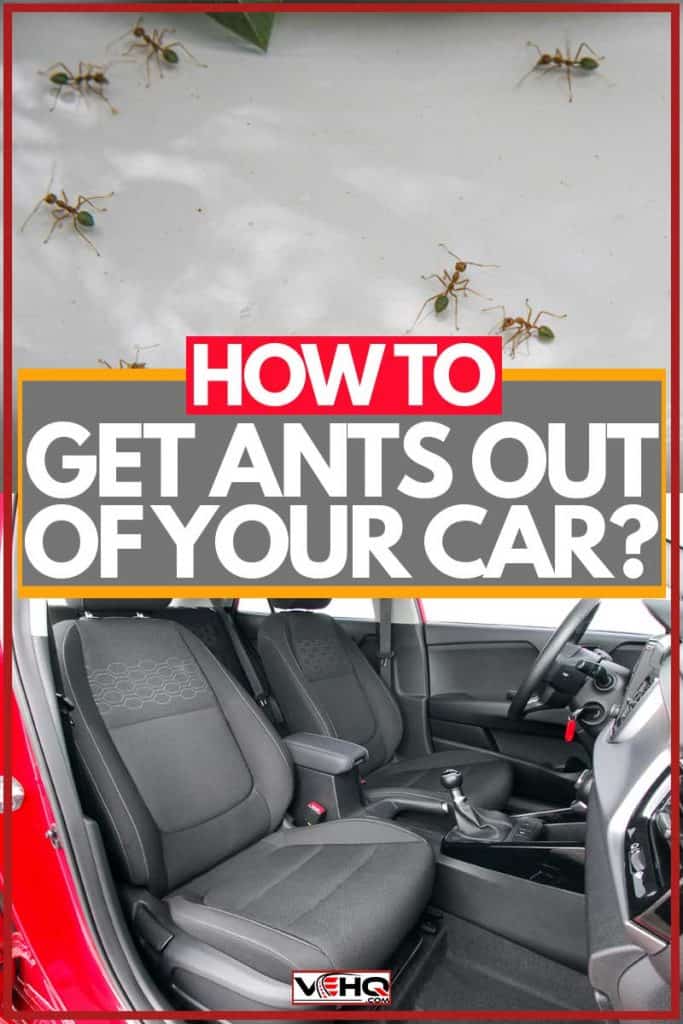 Ants will always be troublesome to deal with. They get inside your kitchen cabinets, your house floors, even your bedroom. It's especially annoying when they get inside your car. When that happens, you have to get in between so many tight corners and crevices to find the source of the problem. Even if you do find it, it can still take a little while for the ants to go away completely. So how can you get ants out of your care? We have researched this to help with this annoying issue.

To properly remove ants from your car, you can try one or a combination of the following:

You'll want to take action sooner rather than later. Of course, you don't want an ant crawling on you while you're in the car. But despite their tiny size, ants can eventually have an impact on your vehicle. Continue reading to learn more about ant removal.

Can Ants Damage a Car?

As small as these pests are, yes, they can slowly but surely do damage to your car. More specifically, the electrical wiring and the engine.

Some ants will chew at the wirings under the hood or in the electrical system. If it's only a tiny few ants, it won't be so bad. It can escalate quickly if more wire chewing ants pop up, though. If not taken care of, this can cost you lots of money in the long run.

Other ants will make a home out of your car. They'll begin nesting inside the wiring. That nesting can expand large enough to mess up something under the hood.

Very tiny ants can find their way inside important compartments in the engine. They could block the oil pump, affecting the whole engine.

Keeping your car ant free is critical. Just removing one or two won't be enough because ants are tricky; killing one could bring more.

What Attracts Ants to Your Car?

Now there are over 12,000 species of ants, and not all of them are so dangerous. You'll likely only encounter a handful of ant species at the worst.

The type of ant doesn't make too much of a difference because they're attracted to or found near the same things. Being close to trees or ant hills, having a sweet scent, or a moist presence will attract ants. So if you have ants in your car, it probably has something inside that the ants want to feed on.

Although, knowing the common ant species will help in figuring out the source of the problem.

These are the ants you'll find near trees. Every state has them, but they're more common in warmer states like Texas. Sweet tasting things will attract them.

These yellowish-brown ants like to feed on greasy foods. So if you spilled fast food in your car recently, these are the ants you're likely to see. They camp close to other ant nests, feeding on other dead insects.

These red and blackish ants are the most irritating. One bite from these will sting badly. If you live in a southeastern state (Florida, Alabama, Georgia, Texas, etc.), fire ants will be common. They feast on sweets, dead things, and fatty foods. With their teeth, they will do damage to your car's wiring while leaving a bad sting if it bites you too.

Pavement ants won't do any harm to you; they're just there. They're found nesting in the grass or under wood and rocks. These are more commonly found in the northeastern, Midwest, and northwestern states. You'll see pavement ants around fruit and other sweet or greasy foods.

Will Ants Go Away on Their Own?

If ants are present, there's something they want that's also present. Removing that source will prevent more ants from appearing (usually), but that doesn't mean the ones already there will go away. By that time, they will have made a home somewhere in your car already. In a worst-case scenario, a few new ants may appear.

Once ants are there, it's improbable they'll leave once they got what they sought after. You'll need to do some deep cleaning on the floor and in between your car seats.

Can you Spray Raid in Your Car?

Using Raid is an effective tactic for killing ants on sight. You won't find too much success if this is the only thing you use. It won't protect your vehicles from future infestations.

However, spraying Raid on your tires will help to at least reduce the ants. Since ants crawl up the tires, they'll be intimidated by the smell. Apply a layer of spray once a week to help keep ants away.

We recommend not using Raid inside the car due to the smell it leaves behind. Additionally, you'll need to let your car air out a little.

Can You Bomb Your Car for Ants?

Ant bombs can be useful for reaching the hard-to-reach spots in your car, such as in between seats or armrests.

An insect bomb we recommend you use Raid's concentrated deep reach fogger.

This spray will kill not only ants but also roaches, spiders, and other insects. The fog will travel in all the places you couldn't reach in your ant removal efforts. Its effects will keep your car protected for up to two months. You won't have to worry about any unfavorable messy residue anywhere in your car. Just make sure you read and follow the directions. Once used, give your vehicle a few hours to air out, running the A/C so the vents can air out, too.

What About Ant Traps?

If bombing your car isn't an option you want to take, using traps will also work. Ant traps give off a scent that smells sweet, which will attract ants. However, that scent is toxic to ants; eventually, the infestation will die out from consuming the "food," and your ant problem will be gone.

One of the best ant traps you can buy is Terro Liquid Ant Baits.

Because these traps have a sweet smell, more ants will appear in the short run. But once they eat the bait, they'll all die off slowly. You'll see results within two weeks.

Sometimes the idea of using chemicals doesn't sound ideal. You can also try any of these natural remedies to take care of your ant problem.

Ants love sugary scents and hate sour or bitter odors. Pour some warm water into a spray bottle and add a few slices of lemon or orange. Then spray it around your car.

Insects hate the scent of vinegar. Combine this with water and spray around areas where ants are prevalent. It won't do anything to kill them, but spraying it will keep them away.

In Short: Keep Your Car Clean

We may have just provided multiple solutions for ant problems, but the best one of all is to keep your car clean. As mentioned earlier, insects will appear in your car if they're attracted to something. Maintaining a clean car at all times will prevent ants. It'll also keep out more severe infestations, like rodents.

In the moments when ants appear regardless of vehicle cleanliness, you now have multiple options to try to get rid of them.