The GMC Savana is a popular cargo van capable of fitting 12 to 15 passengers. However, there be times that you need to get under the hood for one reason or the other. But how do you open the GMC Savana's hood? Below we have researched and answered that question for you.

To open the hood of the GMC, Savana follows these simple steps:

See, that wasn't so bad! Now that you have the hood open, you can check your fluids and any other possible issues. In this article, we will explain opening the hood on a GMC Savana in more detail. In addition, we will cover what to do if the hood latch fails, so read on! 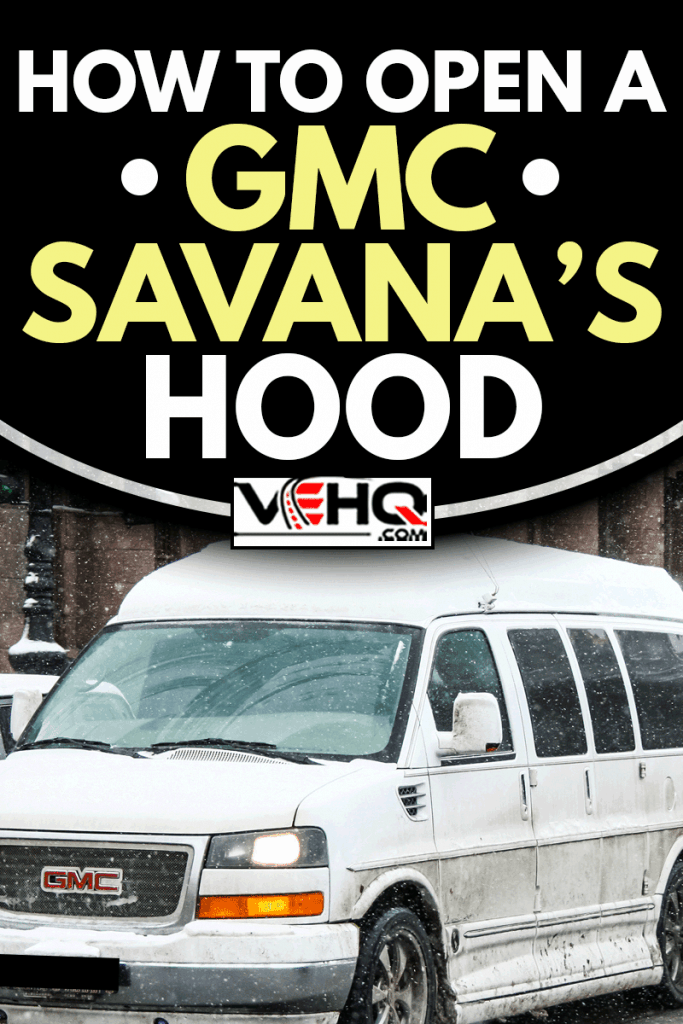 How To Open A GMC Savana's Hood

Many of today's cars and trucks are equipped with hood opening systems. Some vehicles use hood releases on the inside to open their hoods, while others use a latch located under the steering wheel column. To find your GMC Savana's release, check out the diagram below.

The latch for this vehicle is directly underneath where the column and steering wheel meet. You will see a small metal latch that looks like a button on your GMC Savana. To open the hood, you must pull down on this latch until it clicks into place. Next, release the latch's hold by pulling up on it until it is free from the vehicle's structure. Now, you can open your GMC Savana's hood.

The hood release can sometimes fail on a GMC Savana. For example, sometimes the latch gets weak and spongy, or it breaks altogether. In this case, you will need to replace your GMC Savana's latch. Below we have compiled all the information you need to know about replacing this part, including how much a replacement latch will cost.

How To Close A GMC Savana Hood

To close your GMC Savana's hood, align the edge of the hood with the lip of your vehicle's body. After you have closed it, check to see that everything is in proper position and that there are no foreign objects left on top. This will help keep you safe from injury.

How To Open A Hood That Won't Open

If your hood does not latch, there are several things to check. Check the manual for proper installation of your latch and then follow the steps below to attach it correctly:

Then, put the bolt back into position on top of the latch. After that, you are good to go! If your GMC Savana doesn't open its hood, check the latch closely, and you are sure to find the problem.

How does a hood latch sensor work?

The hood latch sensor is a device that activates the release of your vehicle's hood when it has been shut securely. Hood latching systems are essential for overall safety and convenience if you need to open or close your car's hood while driving down the highway. A hood latch system will generally activate a spring-loaded release handle that will pop up from behind your vehicle's steering wheel.

Where is the hood latch sensor located on GMC Sierra?

The hood latch sensor can be found on the driver's side of your GMC Sierra. It is positioned near the edge of the hood and right underneath, where it meets your car's windshield. The hood latch sensor should appear as a black circle with a wire attached to its center. If you look at this device from inside your vehicle, it should be on the left-hand side.

If you are having an issue with your hood latch sensor, remember to refer to your GMC Sierra manual for information about it! It will tell you everything that you need to know about how it's located about your car's hood and where it must be positioned for you to close and open it. Remember, the first step you should take when your hood latch sensor fails is to consult your vehicle's owner's manual for exterior lock mechanisms.

Where is the hood release button?

The hood release button is located on the lower left-hand portion of your vehicle, typically under the steering wheel. The button might be covered with a rubber cover, or you may have to remove some trim from the vehicle before getting to it. You can also find this lever under the dash on manual trucks that don't have power options for opening the hood.

This lever on the dash will have a hood release tab that can swing upwards when you push it. It is designed to activate the latch in case there is an emergency or if your car security system automatically locks the doors and unlocks them with the same control switch, which activates your rear hatch, too.

What do you do if your hood latch fails?

Your hood latch fails if it is not positioned properly at the base of your car's windshield or if it is malfunctioning. To fix this, you will need to adjust the mounting bracket and your latch to ensure that they are facing properly. Also, adjusting the positioning of these parts can help them work in unison again.

If this does not work, you will need to replace your hood latch. You would have to remove the bolts holding it in place and then install a new one. This is a relatively simple fix, and many of these replacement parts can be found at your local auto supply shop or an online garage.

Call up an expert if you need any help locating your car's hood latch sensor or its lever.

The best thing that you can do to avoid having your hood latch fail altogether is to keep up with maintenance on your car. Have any issues with the hood of your vehicle checked out as soon as problems arise. Then, if you are unsure how to repair or replace your hood latch sensor, take it to a mechanic. This will help you avoid getting stranded on the road and give you peace of mind that your vehicle is running in tip-top shape!

How do you manually open a hood?

There are many different types of latches for a car hood. Therefore, the way to manually open it may vary based on your vehicle make and model, but here is how the process works in general terms:

1. Find your latch release lever — this will be under or around the inside of your steering wheel housing. If you have power options for opening the hood of your car, skip step 2.

2. Pull the release lever up — this will typically trigger a latching system that will help you open your hood or trunk. If you have power options for opening the hood of your car, you may be able to hit a button here instead.

3. Pull on the handle of your hood using strong and steady force.  This should pop it open if the latch system is working properly. If you are still having trouble, check for loose bolts or anything else that might be blocking the way.

4. Once open, secure your hood again by replacing any bolts you had to remove and checking to ensure the latch is properly in place.

The GMC Savana is an excellent vehicle, but there will be times that you will need to be able to open the hood. So, make sure that you always check your car hood latch system before driving. You don't want to be stranded and have another problem, so pay attention to any signs of trouble!

If your hood does not open or close properly, make sure you try to fix the issue yourself before taking it in for a mechanic. You can use this guide to see how to open your hood manually, but if you are still having trouble, consider calling up an expert.

If you enjoyed this article, then you should also read:

What's The Best Oil For A GMC Sierra?

Can A GMC Canyon Be Flat Towed?