Choosing a compact car gives us the benefits of maneuverability, good fuel economy, and just enough comfortable space for passengers and some cargo. However, when you need more space, some models like the Honda Civic have adjustable backseats that allow you to extend your trunk's cargo space. How do you put the rear seats down in a Honda Civic? Here's what our research has found.

Would you like to have a more detailed guide on how to put the back seats down in a Honda Civic? Do read on, because we've also included the Honda Civic's available cargo space and other features and benefits.

How Do You Put The Seats Down In A Honda Civic? 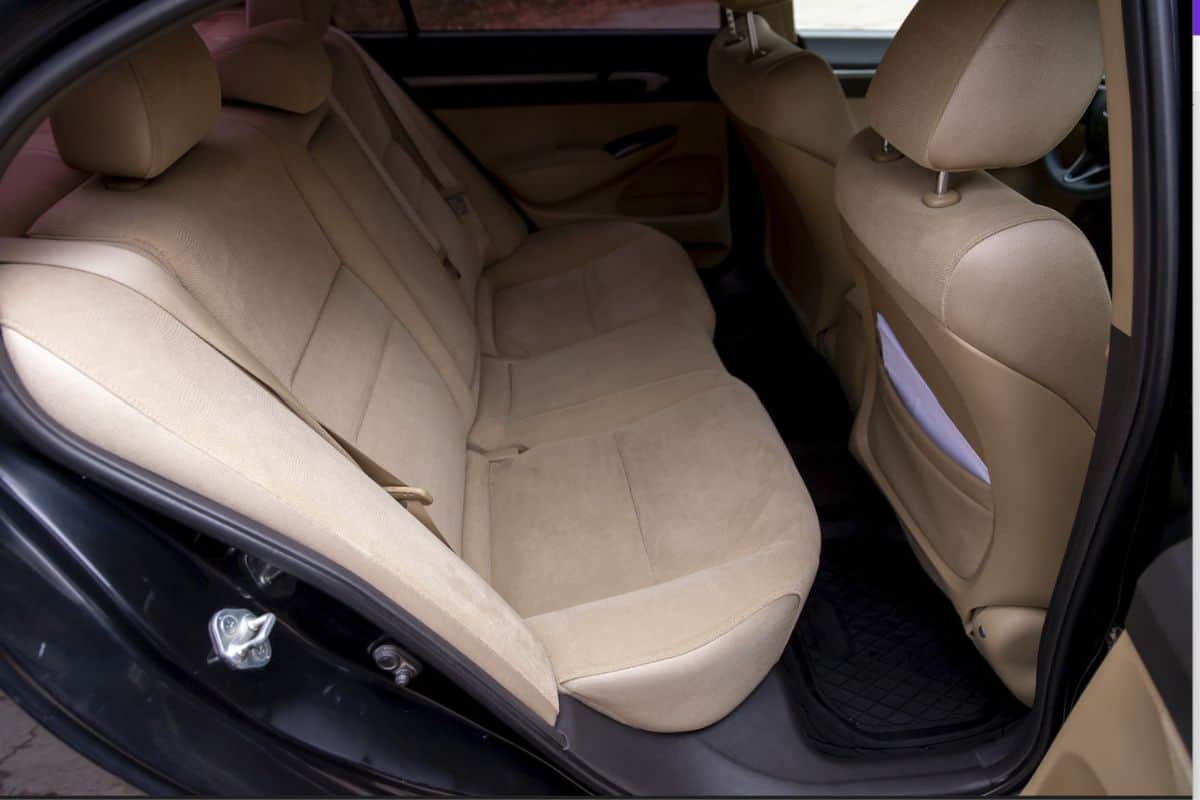 For over half a decade now, the Honda Civic has reigned as the best-selling compact car in America, leading even against the popular Toyota Corolla. Aside from a zippy engine with good fuel economy, the Civic also excels in passenger comfort and cargo space.

Sometimes, however, we may find ourselves in need of a larger cargo space to haul some big items. Fortunately, the Honda Civic comes with adjustable rear seatbacks that fold down to expand the cargo space. So how do you do it?

Although the steps are slightly different between the sedan and hatchback versions, the process is very easy. 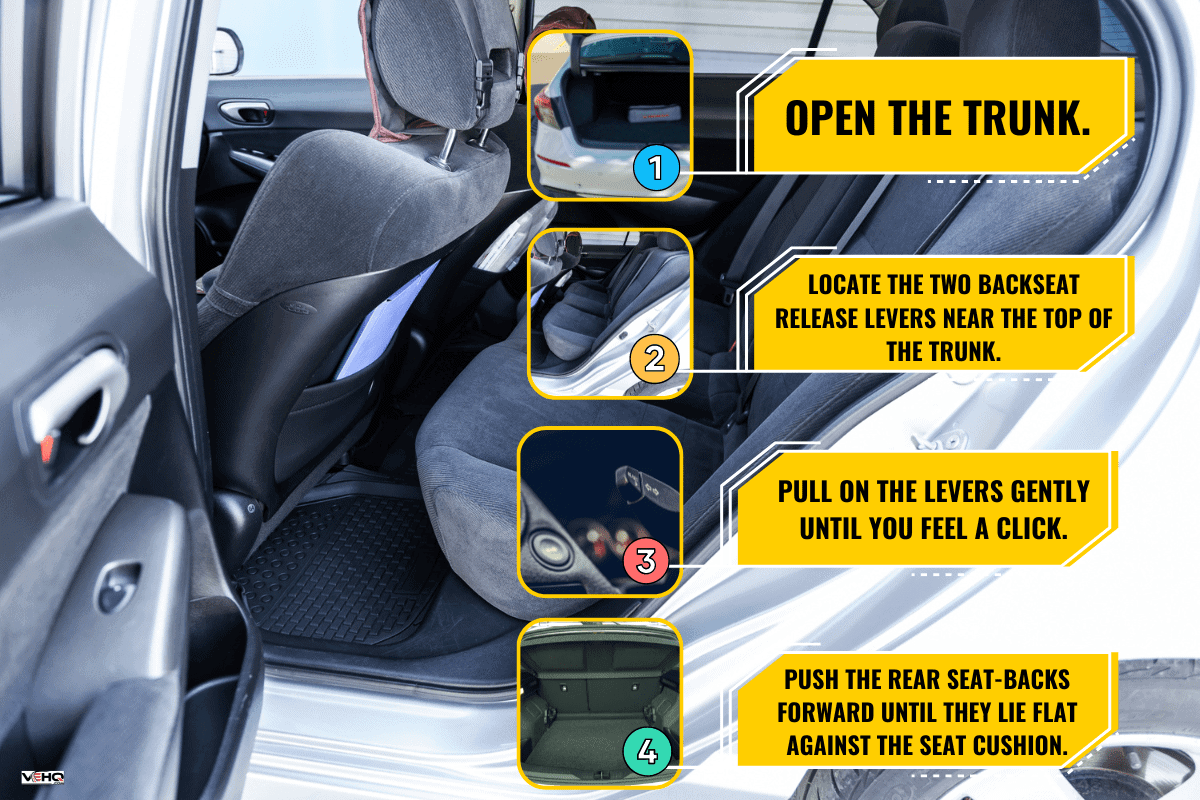 Here are the steps on how to fold down the rear seat-backs of the Honda Civic Sedan.

You may need to adjust the front seats so that they do not get in the way of the folded rear seat-backs.

Moreover, Honda reminds us never to drive with the rear seatback down and the trunk open to prevent the car's own exhaust gas from entering the cabin.

Finally, secure all the cargo in the trunk or extending into the cabin. Hard acceleration and braking may cause loose cargo to fly backward or forward, thus possibly causing cargo damage or even human injury.

If you want to return the rear seat-backs to their normal position, then you only need to push them up and back until the seat-back hooks lock into their designated latches.

Here's a short video on how to fold down the rear seat-backs of the Honda Civic sedan:

Folding down the rear seat-backs of the Civic hatchback is very similar to how you would do it in the sedan version. This time, however, there is no trunk to hide the release levers. The two release levers can be found near the headrests of the two outboard rear seats.

You can pull the release levers and push down the rear seat-backs in one continuous motion. Like the sedan version, the Civic hatchback has a 60/40 rear seat split, so you will need to push down two rear seat-back panels.

Again, Honda gives us a few safety reminders when folding down the rear seatbacks.

Check out the first 3 minutes of the video below to see how to fold down the rear seat-backs of the Honda Civic hatchback:

How Big Is The Trunk Of A Honda Civic?

Honda's main specifications page for the Civic does not disclose the actual available cargo space with the rear seats folded down. However, other automotive review sites have estimated the hatchback's cargo space behind the front seats to be 46.3 cubic feet.

With 46.3 cubic feet of cargo space, the Civic hatchback's maximum cargo space is almost the same as a Toyota Highlander with the 3rd-row seats folded down. That's quite a lot, considering that the latter is a mid-size crossover SUV.

So how much space exactly is this, you might be thinking. Check out this video to see what 46.3 cubic feet of cargo space look like:

How Do I Manually Open My Honda Civic Trunk? 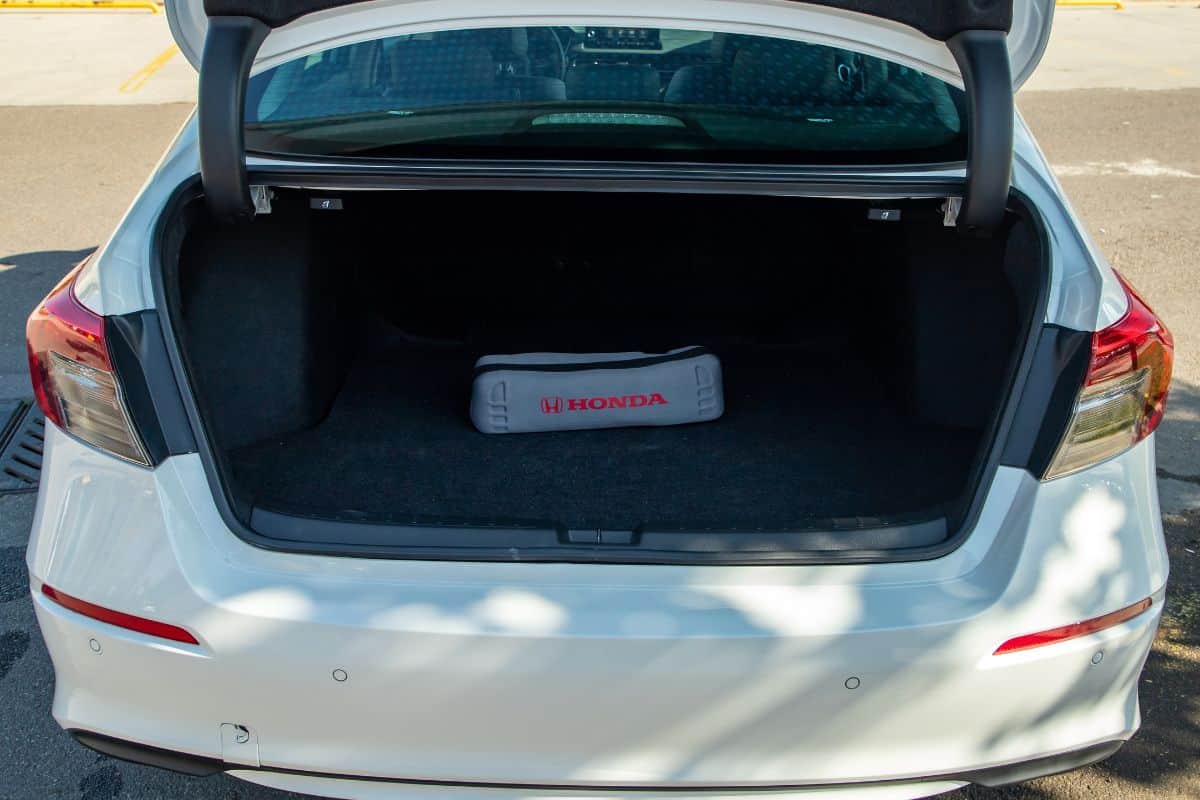 Like most of Honda's current models, the Honda Civic has an electronic trunk release function. With a soft touch of a button in the cabin, on the key fob, or near the trunk's Honda badge, you can open your Civic's trunk.

As the trunk now operates by power, the function depends largely on the car's 12-volt battery. So what happens if your Civic's battery loses all of its juice? Can you still open the Civic's trunk with a dead battery?

Yes, you can. Honda gave Civic owners a way to open their car's trunks manually, even without battery power. All you need to do is to get in your Civic's cabin using your mechanical key and find the manual trunk release lever or keyhole.

Check out this video on how to open the Civic's trunk even with a discharged battery:

How Much Weight Can A Honda Civic Haul?

In the previous sections, we discussed the Honda Civic's cargo volume. However, you may also be wondering how much weight it can carry. After all, some smaller items may be heavier than other bigger pieces of cargo.

What Engines Come In the 2023 Honda Civic? 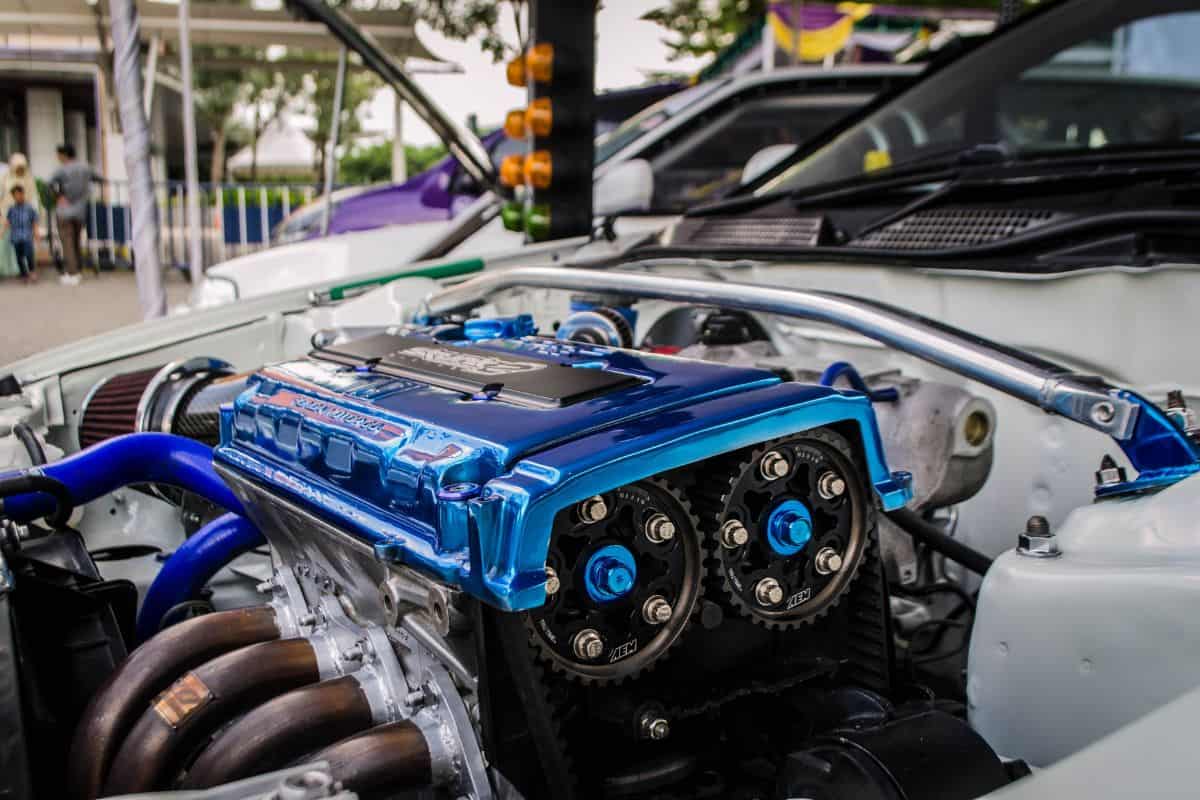 The 2.0-liter DOHC i-VTEC engine powers the entry-level Sport trims of both the sedan and hatchback versions. This four-cylinder, naturally-aspirated engine produces a respectable 158 h.p. and 138 lb.-ft. of torque for a comfortable yet capable ride.

The 1.5-liter turbocharged engine, in turn, powers the two higher trims of the sedan (EX and Touring) and hatchback (EX-L and Sport Touring) versions. Although smaller in displacement, the turbocharged four-cylinder engine delivers 180 h.p. and 177 lb.-ft. of torque.

The 2.0-liter intercooler turbocharged engine provides the grunt for the sporty Type R version. This powerplant produces 315 h.p. and 310 lb.-ft. makes the 2023 Civic Type 3 the most powerful production car that Honda has made for the American market.

The 2023 Honda Civic is one of the most fuel-efficient cars in the compact car segment, traveling approximately 3 to 4 miles more than its direct competitors for every gallon of fuel.

According to the U.S. Environmental Protection (EPA), the Civic's EX trim with a 1.5-liter turbo engine and continuously variable transmission (LL-CVT) can reach 36 miles per gallon on a combined city and highway driving condition.

Moreover, the entry-level trims with the 2.0-liter naturally-aspirated engine and M-CVT can also reach a competitive 33 miles per gallon combined fuel economy. 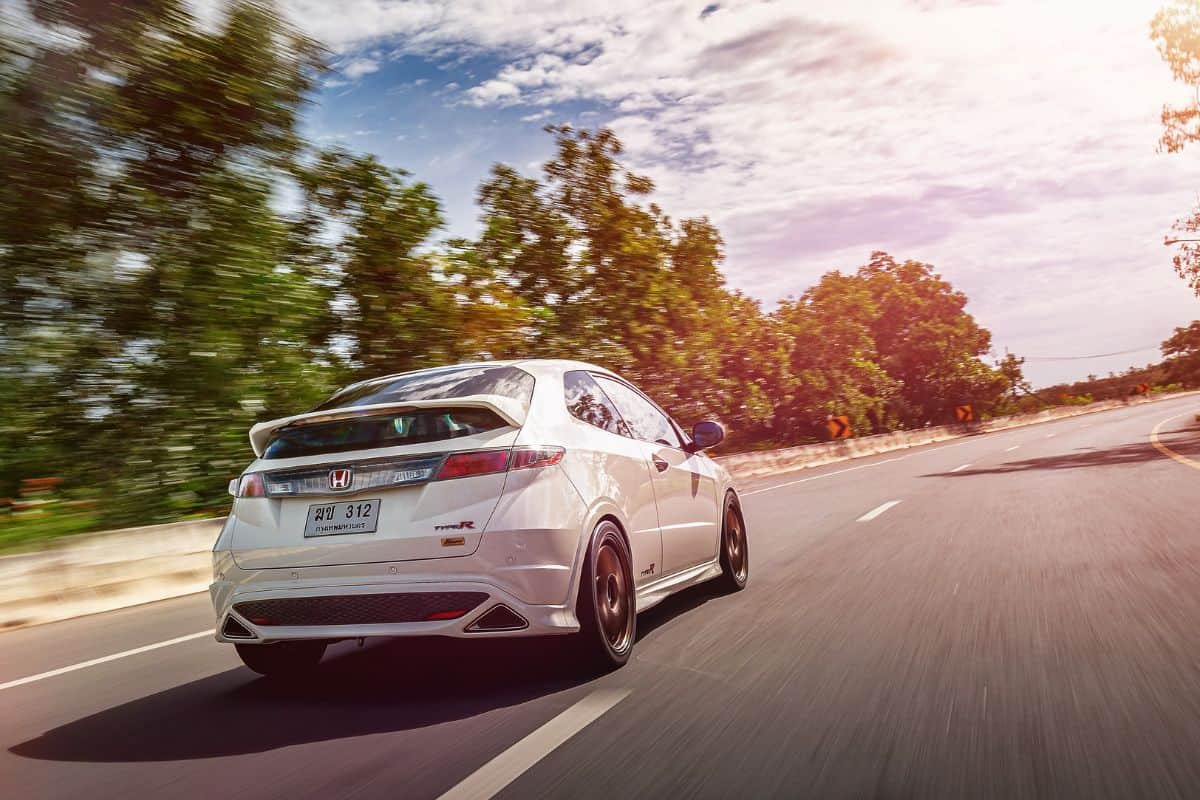 Aside from delivering good passenger comfort and excellent cargo capacity, the Honda Civic also scores high in terms of safety.

How Much Is A Civic?

The 2023 Honda Civic comes in a few models and trims to cater to different target markets. If you're in the market for a new compact sedan, then we're here to help you window-shop online with the Civic's starting prices.

These starting prices are accurate as of December 2022.

Thank you very much for reading. We hope we were able to guide you on how to fold down the Honda Civic's backseat.

For more interesting reads about car seats and other automotive topics, you may also check out these great articles below.

How To Watch Netflix In Honda Civic