Gunk Engine Degreaser is a great solution for breaking down the toughest sludge. However, many people don't know if it can be safely used on certain materials and surfaces. With the information we found, we hope you will feel more comfortable using it.

Gunk Engine Degreaser is a degunking product that is safe to use on all surfaces under the hood. You can use most engine degreasers on aluminum, plastic, and painted surfaces.

Gunk Engine Degreaser is the perfect product to keep your engine out of a sticky situation. It has been helping us keep our engines clean since it was first introduced more than half a century ago, and it's a well-loved product. Read on to learn more about the benefits of using it and how to use it safely and efficiently.

What Makes Gunk Engine Degreaser Effective In Removing Grease From Your Engine?

The buildup of grease, dirt, oil, and other contaminants in the engine bay won't cause that much negative impact on the engine performance unless they have made their way to and interferes with the engine’s combustion system. 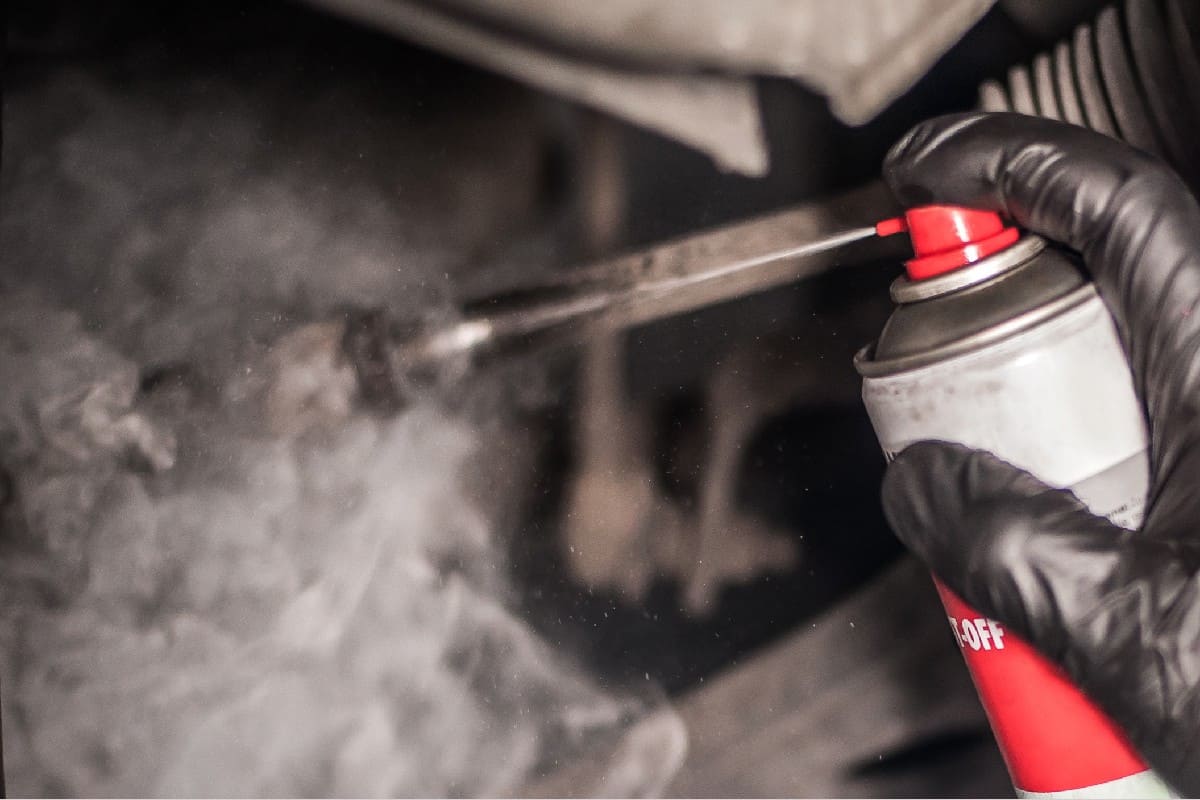 Does this mean it is not important to have a degreaser that effectively removes these unwanted substances? Far from it! It is easy to get into the habit of just letting your car sit there and not doing anything about the dirt and oil forming into sludge over time in your engine bay.

If you have had your car for a long time and it has been well maintained, then you should probably know what the benefits are when it comes to keeping your engine bay clean.

Further, gunk caused by the formation and hardening of sludge is the most common problem in engines. A greasy engine bay will not only need to be cleaned more often but also requires more maintenance than one that does not contain any buildup of oil or other contaminants.

That sludge build-up in your engine bay could potentially accelerate the weakening of the structural integrity of rubber hoses and other plastic components of the engine on top of daily wear and tear.

So what makes Gunk Engine Degreaser (GED) more effective than the rest? We can talk about one of its main ingredients solvent naphtha, as effective in breaking down petroleum or any hydrocarbon-based substance in full technical detail.

But to make things simpler, Gunk Engine Degreaser has been around for more than 50 years, so you certainly can't go wrong with it!

How To Apply Gunk Engine Degreaser (or GED) 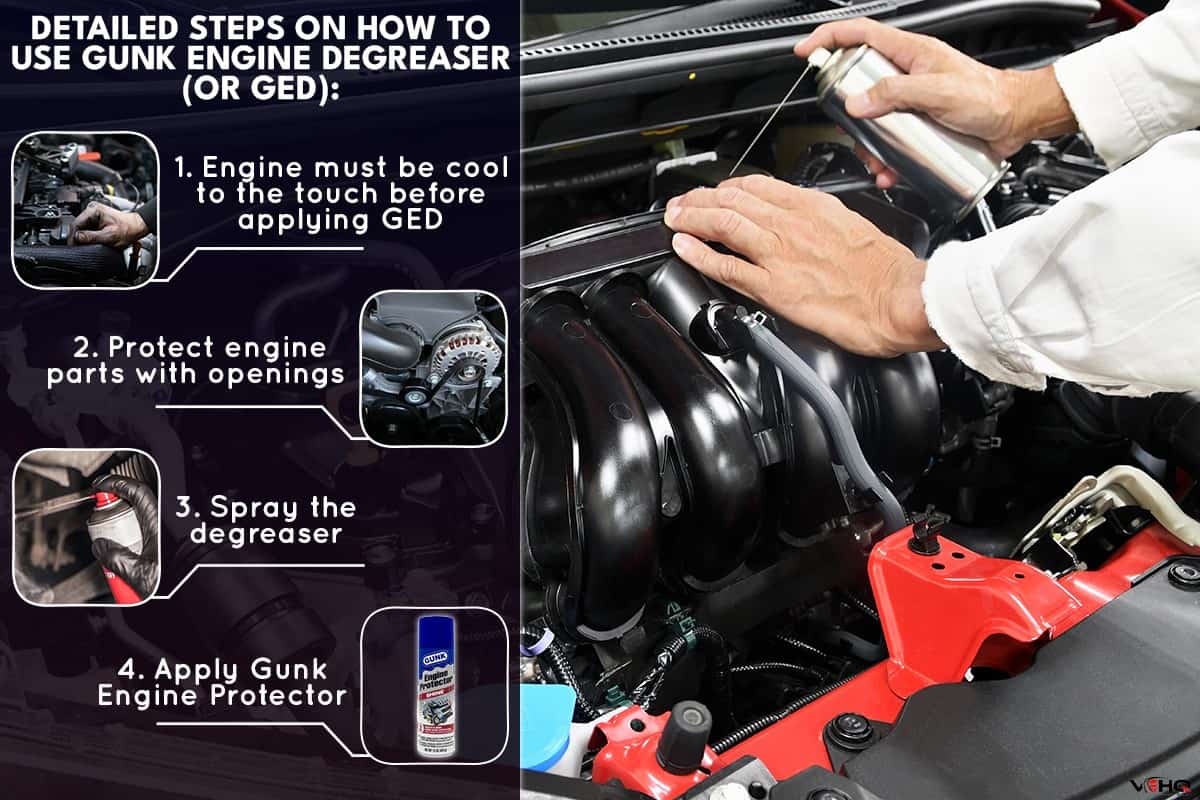 1. Engine must be cool to the touch before applying GED

Make sure the alternator, intake manifold, ECU, and other components are covered before spraying. You don't want any naphtha getting into them. 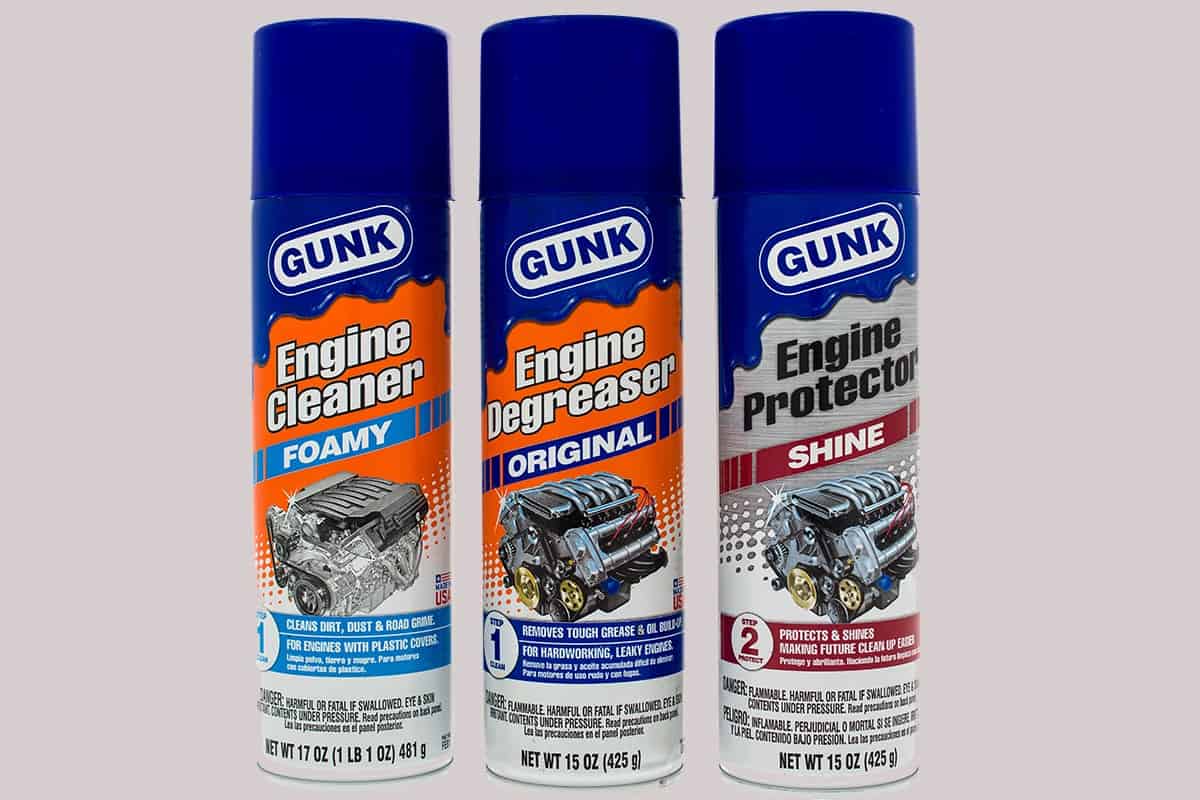 When using a degreaser, it's important to know where to apply it in your vehicle. Spraying it in the wrong location could interrupt the normal functioning of a car component and may potentially damage it (as mentioned in step 2).

The best place to use a degreaser is right on the spot where the problem lies. You should spray the cleaner on the area and let it sit for 15 minutes for optimal results.

This allows it to soak in and get a better grip on the grime. You can flush it away with high-pressure water after. For heavy build-up, you can brush the surface before washing it away.

Check out this Gunk Engine Degreaser on Amazon. 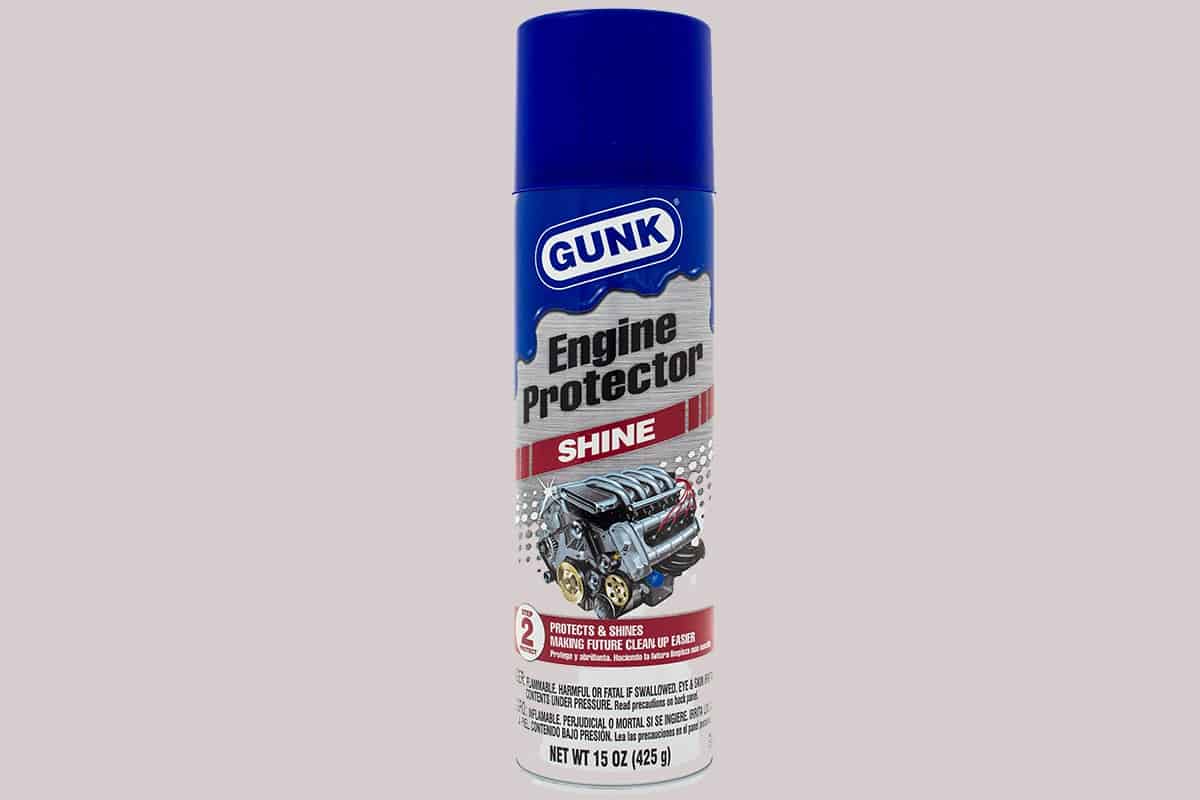 If you want to protect your engine bay from a future accumulation of dirt and grime, you can apply Gunk Engine Protector as a protective coating on the surface.

This product can make your next engine bay cleaning a breeze because it provides a layer of protection that prevents dirt, oil, and grime from tenaciously adhering to the surface.

Check out this Gunk Engine Protector on Amazon.

Watch the Gunk Engine Degreaser in action below:

How Many Minutes Does It Take For A Car Engine To Cool Down?

According to mechanical engineer, Nikheel Tate, engine cooling depends on several variables. For example, engine horsepower, engine size, and the cooling system (coolant level) all play a role in determining how quickly the engine cools down.

Additionally, ambient conditions can affect the cooling process. But on average, it should cool down in 30 minutes.

How Do You Cool The Car Engine Down Quickly?

While it may seem strange, your engine cools off faster in neutral than it would if it were not on. This is because the engine's cooling system is not designed to operate while the engine is not running.

So, when you rev the engine, you're using up the coolant and the fan blowing and dissipating the heat out of the engine.

Is It Safe To Use High-Pressure Water To Wash Engine Bay? 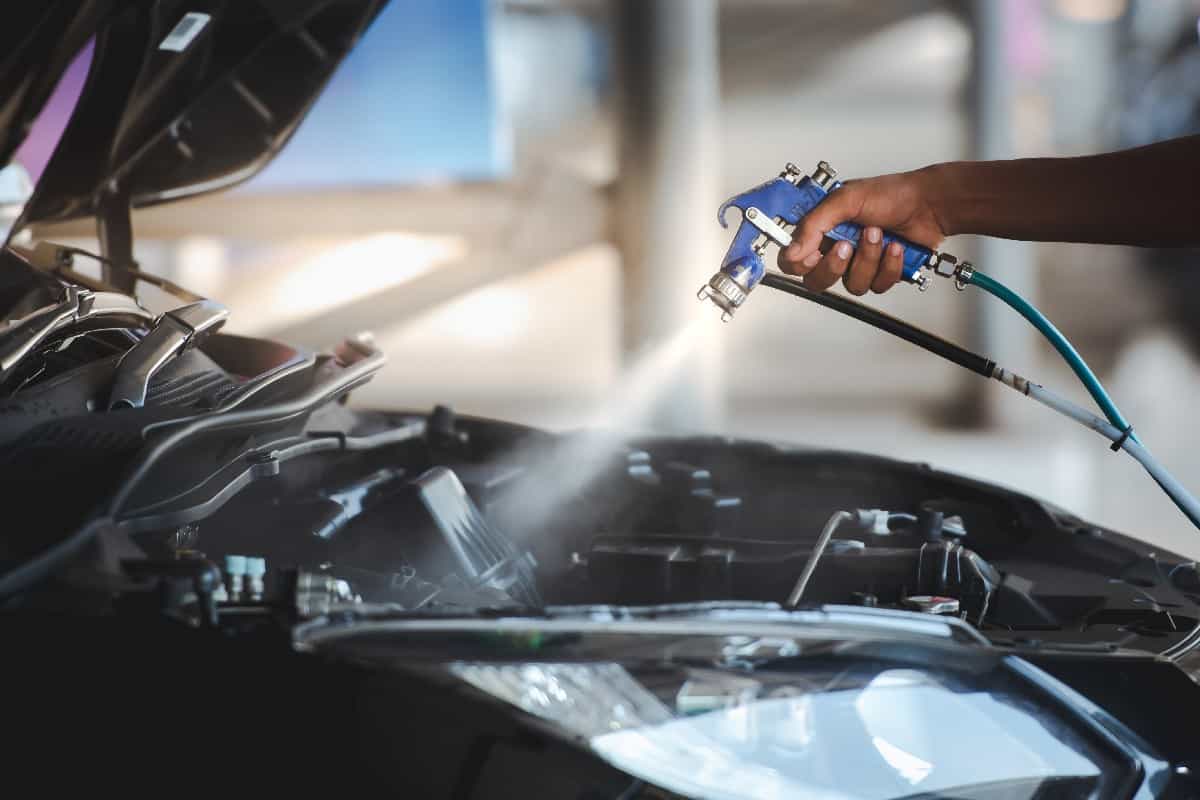 The engine bay is one of the most delicate areas of a car, especially the old model cars where weatherproofing of sensitive engine parts and covering of air boxes are not yet a thing.

High-pressure water can cause damage to the engine bay, which could cause costly repairs, especially to the sensitive components of the engine, such as the alternator, sensors, and ECU.

You might get away with it once or twice, but it could become a problem when you do it repeatedly.

If you're thinking of using pressurized water to wash off the engine bay after applying Gunk Engine Degreaser, you have to make sure you set the right amount of pressure. Just enough so the smaller components won't be knocked out of position.

How Often Should You Degrease Your Car's Engine Bay?

The engine bay is the most critical area of your vehicle. It houses everything from the radiator and oil cooler to the battery, starter, and fan motor.

While the engine bay is a vital part of your vehicle, it is also the area that has the most grime, dirt, oil, and moisture buildup.

While your engine should be degreased and washed as needed, you can easily double up on the maintenance in this crucial part of your vehicle if you miss the schedule.

Since your engine bay is a hot spot for moisture, oil, and grime, it needs frequent cleaning. But don't get this wrong! Cleaning does not equate to washing! It's just outright ridiculous to wash your engine bay after every time you get home.

You can always check the engine bay and vacuum or wipe it clean daily. You just want to make sure you do it more often, so you don't have to replace any parts due to corrosion or build-up.

This will ensure that you get the most out of your engine and help it last longer. Typically, it is the best practice to wash your car's engine once every three months.

What Does The Consumer Product Information Database Say About Gunk Engine Degreaser?

The Consumer Product Information Database (CPID) is a type of database that provides useful information to the general public. It is a compilation of product safety information that is available for consumers to access online.

What Can I Use To Protect The Alternator And ECU From Getting Wet?

A common mistake when washing the engine is that it may get water into the vehicle's ECU. If your engine is wet, the water can flow into the alternator and ECU if they're not protected.

The ECU controls the spark timing and fuel injection, and everything else that happens in the vehicle.

Have you ever experienced difficulty starting your car after washing the engine? Chances are you have had water in the alternator.

The alternator converts electricity into direct current (DC) which is used to charge your battery. If you don't have a working alternator, your car won't be able to start.

WD-40 has moisture-repelling properties. You can use WD-40 for your car's alternator to act as a protective layer against water. The same properties that make WD-40 a moisture repellant are also useful in preventing moisture from causing damage to your car's ECU. 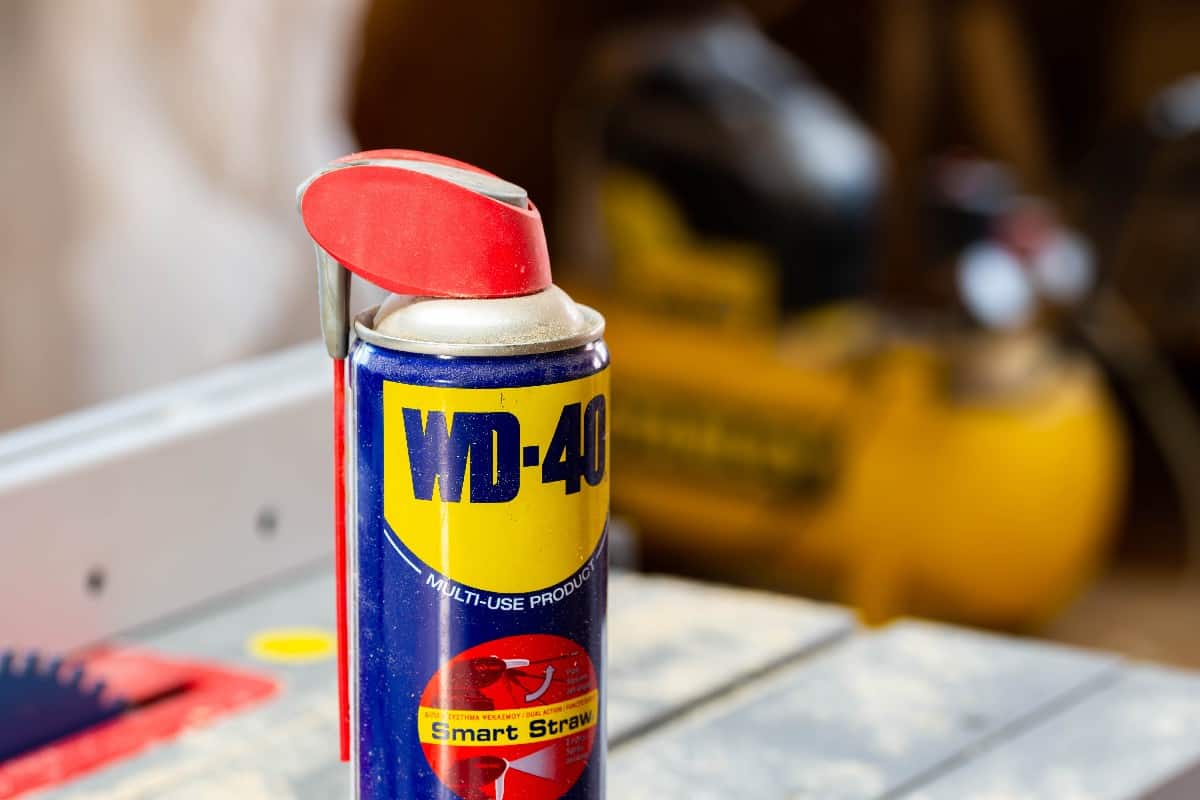 Just a caveat: Do not spray WD-40 directly into the alternator! Instead, spray a generous amount on a clean rag and wipe it on the alternator's outer metal casing.

Remember that WD-40 is also in liquid form. Getting some of it inside the alternator by spraying is counterintuitive if you want to protect it against moisture.

Check out this WD-40 on Amazon.

Car Engine Still Hot After Two Hours - What Could Be Wrong?

It can be frustrating when your vehicle's engine overheats. However, the heat build-up is caused by a car's cooling system not working efficiently. If you notice the coolant level in your vehicle is low, there is likely something wrong with the radiator hose.

One reason is that the hose may have been damaged due to being punctured by something. If there is a hole, the coolant may leak out, thus causing the coolant level to drop.

If the hose has been exposed to extreme heat or cold temperatures, the rubber inside the hose may also deteriorate, preventing the coolant from flowing through.

Another common problem is that debris may have become lodged inside the hose. The debris can prevent the flow of coolant through the hose. 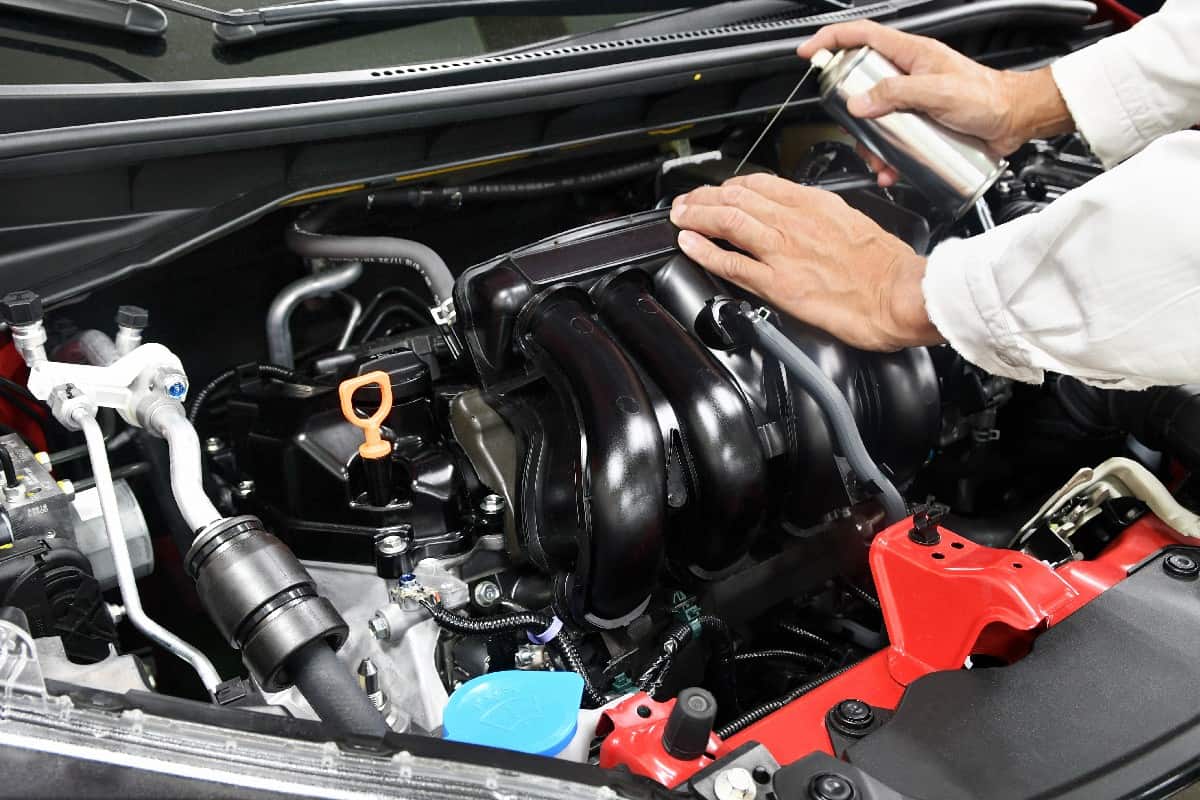 The Gunk Engine Degreaser is a highly effective degreasing solution that comes in a 15-ounce container. It has been tested and proven effective in removing stubborn oils and gums for more than half a century.

Regardless if your car is the carburetor type or fuel-injected, it is suitable for both. For those who need a cleaner, degreaser, and degunking solution for their car, we highly recommend this product.

Oven Cleaner Vs Engine Degreaser [What Is The Difference?]

Simple Green Vs Engine Degreaser [Which To Choose To Clean Your Engine?]