Are you looking in the market for a Nissan? Wondering if the Frontier is a four-wheel drive (4WD) truck? Look no further! With winter right around the corner, knowing if a car has FWD, RWD, 4WD, or AWD can be the one quality that makes or breaks the decision to finalize a purchase. We've done our in-depth research so that you can rest assured that the Frontier is the right choice for you!

Of the 12 available options of Nissan Frontiers, seven options come equipped with four-wheel drive. From the three models (King Cab, Crew Cab, and Crew Cab Long Bed), the King Cab has two 4x4 trucks, the Cab Crew has four 4x4 trucks, and the only option of the Long Bed is 4x4. People have a plethora of options that come featured with 4WD when it comes to Nissan Frontiers.

Here is the list of Nissan Frontiers that are 4WD:

Now that you know there are options with 4WD, we'll unpack each model so that you can gain a better understanding of what each has to offer. We also cover other questions that we typically think of when it comes to trucks. These questions include things such as off-roading abilities, payload capacity, and towing capabilities. We have you covered!

For a better understanding of payload capacity, check out our article: "What Does Payload Capacity Actually Mean In A Pickup Truck?" 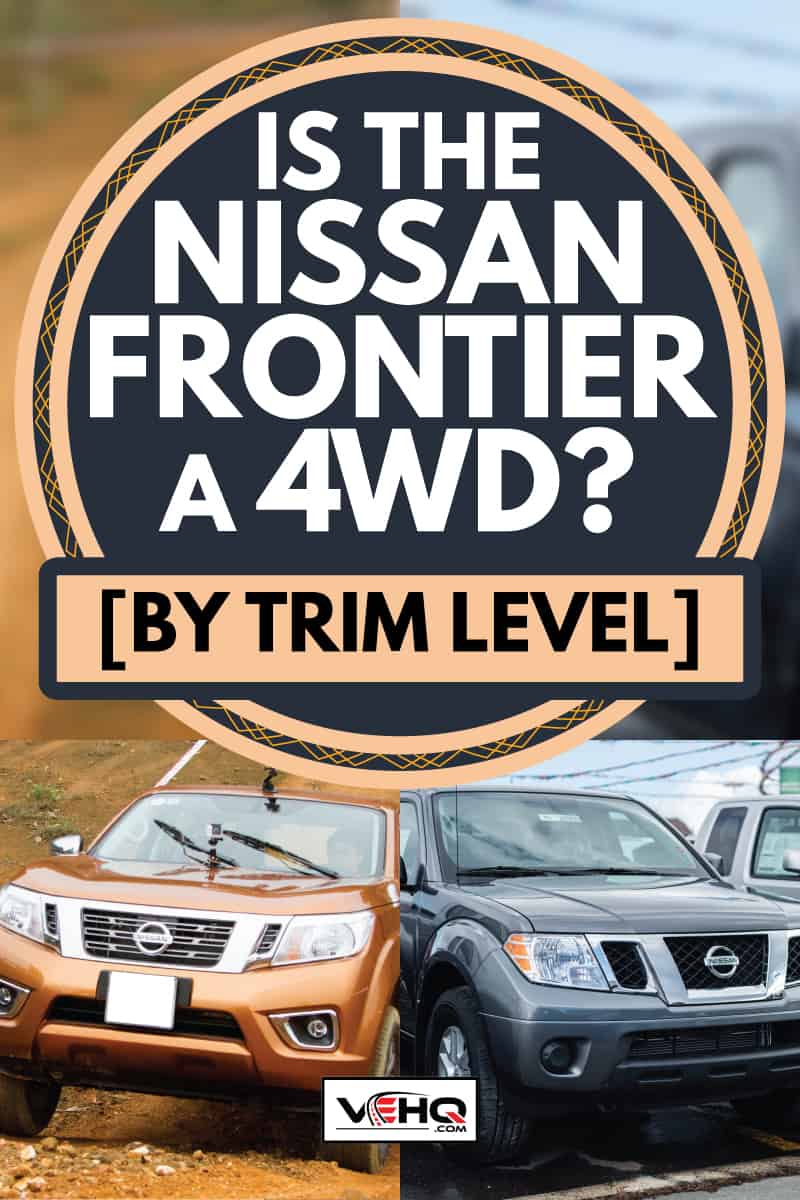 With an MSRP starting rate of $29,680, the King Cab S has a 73.3" bed length, a payload of 1,340 lbs., and can tow up to 6,370 lbs. Not only does it have a long cab length, but it also comes with rear under-seat storage. Also, for easy navigation when in reverse, this model comes with a rearview monitor.

Similar in nature, but with an MSRP of $30,560, the King Crab SV has the same bed length, but can store and tow a little more. The payload is 1,360 lbs. and can tow up to 6,510 lbs. So depending on if you are someone who has a trailer to consider, the weight capacity is higher in this model.

The Crew Cab S model has a starting MSRP of $31,290, and has a 59.9" bed length. When it comes to payload and towing capabilities, this has the same numbers as the King Can S model talked about above.

Starting at $31,990 MSRP, the Crew Cab SV model has the same length bed as the S, but has a slightly higher payload and towing ability. The payload is 1,360 lbs. and the towing ability is 6,380 lbs., which isn't that much higher than the S model.

With the highest towing abilities to of the 4x4 models (6,500 lbs.), the Midnight Edition has a special aesthetic that separates it from the rest. This car comes equipped with black accents. The black gloss wheels give the truck a different feel which accounts for its slightly larger MSRP of $33,980.

Without having to add any features, the PRO-4X has the best off-roading capabilities. The Frontier PRO-4X comes equipped with four-wheel drive and has great features that are built for off-roading. These features include Bilstein shocks, skid plates, and a front tow hook.

As the only Long Bed 4x4 option, the bed length is the same as the King Cab models (73.3"), but has lower payload and towing abilities. The maximum payload is 1,220 lbs. and the maximum weight towed is 6,250 lbs.

These are all the options of the Nissan Frontier that come equipped with four-wheel drive! Now that you know there are many choices, let's go into other questions people think about when in the market for a truck.

Are Nissan Frontiers Good For Off Road?

When purchasing a truck, if you know that you want to do some off-roading, it is important to know how capable the options you are considering are. Overall, the Nissan Frontier is a capable off-roading truck. With the right setup, the Frontier will ease your mind when taking things off the paved path.

By choosing the 4WD option, people will get an extra inch of ground clearance and will also feel more in control going downhill with this feature. For the ultimate off-roading capabilities in a Nissan Frontier, people should look into the Frontier PRO-4X.

The Frontier PRO-4X comes equipped with four-wheel drive and has great features that are built for off-roading; these features include Bilstein shocks, skid plates, and a front tow hook. This is not to say other models aren't reliable, but for the best off-roading experience, people will want to purchase this model.

How Many Miles Will A Nissan Frontier Last?

Out of all the cars that Nissan sells, the Frontier is one of their most reliable ones. As with any vehicle, keeping up with maintenance and taking proper care of your car is going to increase the number of miles you can put on it. A typical benchmark is around 100,000 miles. If you are really careful, you could drag it out to 200,000 plus, but that also costs a lot.

Does The Nissan Frontier Have A Tow Package?

The Nissan has three tow packages to choose from:

In terms of towing, all three packages include a trailer hitch package. This package has a tow hitch receiver, hitch ball mount, hitch cap, and trailer tow harness. You pick the package based on the truck you get. The difference in price accounts for other features included in the packages. As stated before, the PRO-4x comes with a lot of extra features (hence the higher truck price), so the package doesn't have as many additions as the other two packages.

What Size Trailer Can A Nissan Frontier Tow?

To understand what size trailer a Nissan Frontier can tow, first people should focus on the maximum weight each vehicle can tow. As already noted, there are three kinds of Frontier models people can choose from, and each has its own abilities.

As you can see, the 4x2 models can tow more, but that means you won't be getting the four-wheel drive feature desired. But as we've covered, the towing capacities of the 4x4 aren't that far off. So knowing this, the Nissan Frontier can tow a 22' or less trailer. 22' is pushing the max since loaded, a trailer like that can weigh 6,400 lbs.

It would be safer to not push the boundaries. Also, don't forget about the difference between dry weight and the gross vehicle weight rating (GVWR). Dry weight is the weight of the trailer before supplies (people included) are loaded. The GVWR is the final weight of the trailer once everything has been loaded.

Now that you know your options, enjoy car buying! Feel better knowing that you have Nissan Frontier options with 4WD and are off-road reliable.