The Kia Telluride has been a new name in the SUV world in the last couple of years. The rugged body, luxurious interior, and spacious cabin make it an excellent choice for families who need a vehicle that can do a little of everything. However, a vehicle is only as good as it runs, so what do you do if your Kia Telluride won't start? Before you call the tow truck, we did some research to help diagnose why your Telluride won't start.

Here is a list of the most common reasons the Kia Telluride won't start:

That might seem like an overwhelming list of possible issues with your Telluride! Rest assured, as we have researched each of these to help you diagnose precisely why your Kia won't start. Read on to learn more about troubleshooting to find the cause of your Kia Telluride not starting. 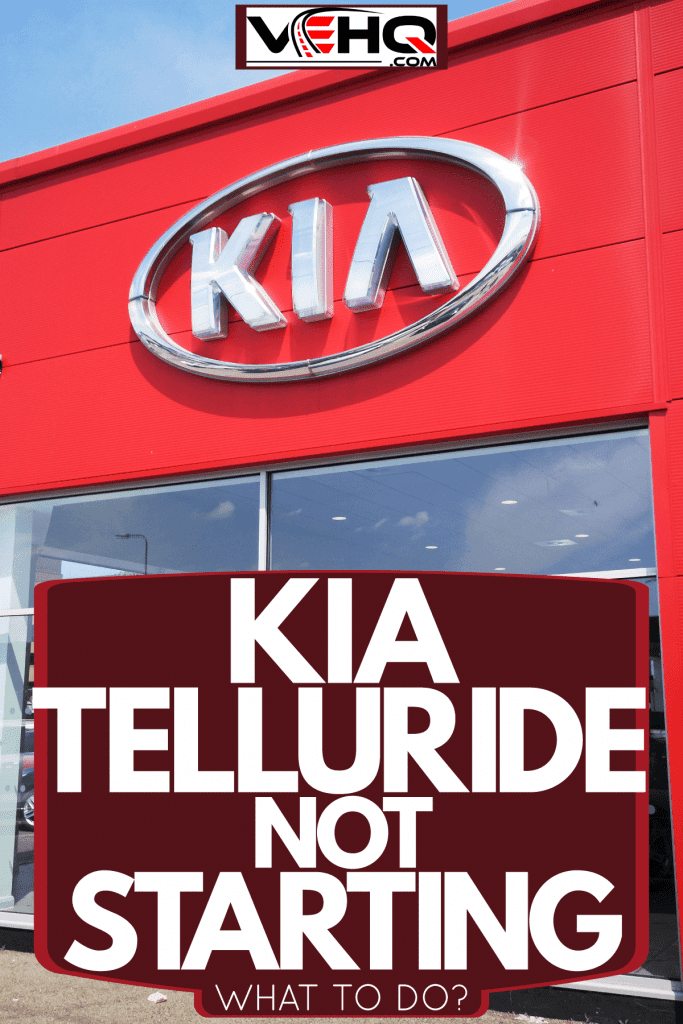 Let's face it when your vehicle doesn't start, it is a complete inconvenience, and honestly, it kind of stinks. What's even worse is not knowing why it won't start and troubleshooting to figure out the issue.

The Kia Telluride is different from other gas vehicles, but the same because it has a battery, engine and needs fuel to run. Taking a look at each of these vehicle parts will help assess and diagnose why your vehicle won't start.

Let's take a look at each possible reason, starting with the most common.

The most common reason a newer vehicle like the Kia Telluride won't start is because of a dead battery. This could be caused by leaving your lights on overnight and letting the battery die.

If you turn the key to your car trying to start it and it makes an instant click sound, then more than likely, your battery is dead. Use jumper cables to start the car, and when it starts, let the vehicle run for ten minutes so the battery can recharge.

If the battery does again shortly after the vehicle is turned off, then the battery may need to be replaced. Go to your local auto parts store or mechanic to have the battery tested to see if the vehicle needs a replacement.

A bad key fob battery could also be the issue on why your Kia Telluride won't start. If your vehicle has a push to start function, then the battery being dead in the fob could be the issue. Don't worry; there are still ways to start the vehicle if this is the case.

If the battery is dead in the key fob, you will need to manually unlock the vehicle's doors. Place the key fob as close as possible to the push to start and try starting the vehicle. If that doesn't work, refer to your owner's manual on other ways to start the vehicle.

Another common issue that causes the car not to start is a bad alternator. An alternator serves the purpose of keeping the battery charged. If the battery is tested and is working properly, then it could be the alternator that is bad.

A simple way to test the alternator is to start the vehicle and disconnect the positive cable from the battery. If the car shuts off, then more than likely, the alternator needs to be replaced.

The fuel pump has the responsibility of transferring gas from the fuel tank to fuel injectors. The fuel pump needs to transfer the correct amount of gas at the correct pressure for the vehicle to run properly.

If the fuel pump is leaking or making a lot of noise, then it could be faulty and needs to be addressed right away. A failing fuel pump could cause the engine to lose power keeping it from starting at all. It is recommended not to try and drive the vehicle on a bad fuel pump and contact a tow truck or a mobile mechanic.

The starter spins the engine, starting it with the ignition key. Without a properly working starter, the vehicle cannot run. Bad starters are a common issue for all makes and models. If you turn your key and you hear a click sound, and the engine doesn't make an attempt to start, then more than likely, the starter needs to be replaced.

Usually, starters don't need to be replaced until the 75,000 to 125,000-mile mark, but that doesn't mean it can't go out on your Kia Telluride earlier. If the starter doesn't work, the vehicle will not start and will need to be towed to a mechanic shop.

If the air conditioner fails to work or starts but stalls abruptly when driving, it could be because the ignition switch is faulty. The ignition switch needs to be looked at immediately by a certified mechanic to avoid further damage or injury.

How Do You Jump Start A Kia Telluride?

If the Tellurides engine doesn't crank or cranks slowly, it could be caused by a weak battery. If you have another vehicle or a jump box, then jump-starting the vehicle is your best bet.

Here are the steps to jump-starting the Kia Telluride:

Does The Kia Telluride Have Transmission Problems?

The Kia Telluride is a fantastic car that fits the whole family, but like other new vehicles on the market, such as the Hyundai Palisade, and Jeep Grand Cherokee L, they have some bugs to work out. Some consumers have reported having premature transmission problems with their Kia Telluride.

However, this isn't as common as you would think. Typically, consumers shouldn't need to worry about replacing the transmission until 120,000 miles.

In the past, Kia has received a bad wrap by being labeled as unreliable and cheap. However, Kia has made leaps and bounds to gain consumer's trust and loyalty. The Telluride exemplifies that by being a reliable SUV that will provide consumers returns on their investment for many years. Kia also has a great factory warranty covering the powertrain for five years or 100,000 miles, whichever comes first.

Why Are Kias So Cheap?

Some may see a price tag of Kia models and think because they are less expensive than other brands, they are cheaply made. However, that is not the case. There is a good reason why Kia vehicles are less costly than other similar vehicles on the market.

Kia's are so cheap because they are manufactured in Seoul, South Korea. South Korea doesn't have to pay tax to import vehicles to other countries, enabling them to make them at a lower price budget. So, the next time you go car shopping, don't think that just because you paid more for a vehicle that you got a higher quality vehicle. Overall, the price of a vehicle can be deceiving.

As we stated above, there can be several reasons why your Kia Telluride isn’t starting. If it isn’t starting, that doesn’t mean your new car is a dud or a lemon. It could be something as simple as a battery dying due to a light being left on in the vehicle. When diagnosing why the car won’t start, begin by checking the most common issues: testing the battery, the key fob, and seeing if the starter makes a clicking noise. These will help you troubleshoot the problem before taking the next step of contacting your local mechanic.

If you enjoyed this article on the Kia Telluride, you might also enjoy:

How Much Can A Kia Telluride Tow?

Does The Kia Telluride Have Remote Start?

How To Remote Start A Kia Telluride?

We would love to hear from you! Please, leave us a comment below!