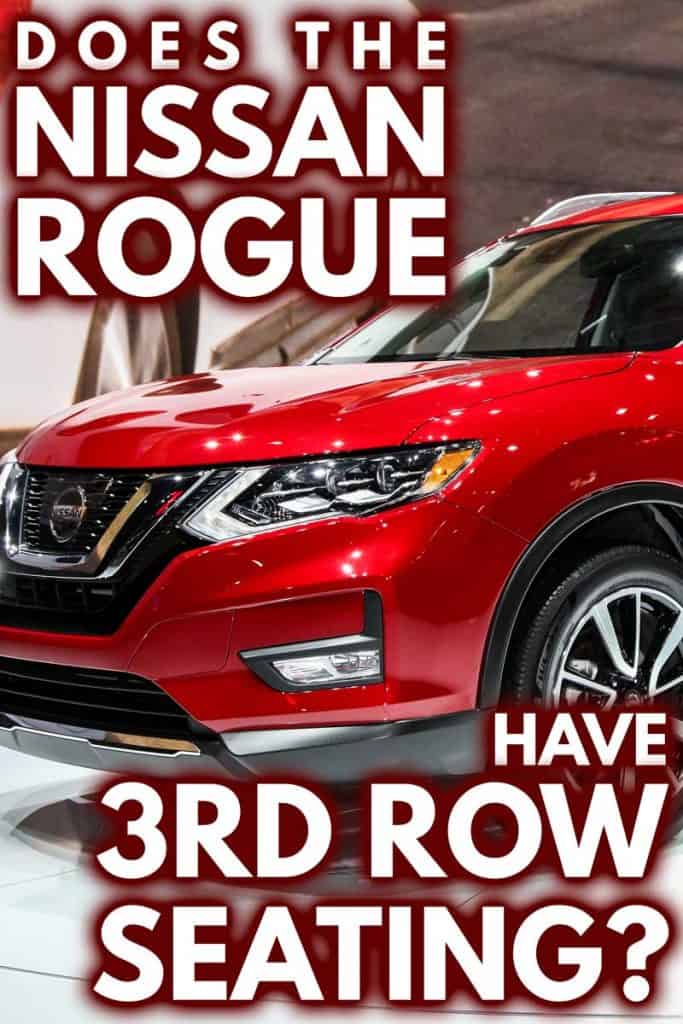 Crossover SUV’s like the Nissan Rogue is one of the most popular and family-friendly cars on the market. The Rogue offers a great deal of flexibility in seating and cargo storage. For a smaller subcompact SUV. It's Nissan’s best-selling car. This SUV can do it all. But, does the Nissan Rogue have three rows of seating?

Some Nissan Rogue models do have 3rd-row seatings while others do not. One of the unique features on the Rogue used to be a “Family Package” that included a third row of passenger seating. Nissan manufactured Rogues with this option in several model years, including 2014, 2015, 2016, and 2017. The third row was an option on certain trim levels, such as the S or SV in a given year. The SL trim and Hybrid models didn't offer a third row.

With the 2018 Rogue, Nissan dropped the third-row seating option and became more focused on maximizing passenger and cargo space for five. 2018, 2019, and 2020 Rogues no longer offer the option for the third row of seats.

Thus all three answers (“Yes,” “No” and “It depends”), although unsatisfying, are accurate. It’s a bit confusing, in any case. Let’s take a closer look at the Rogue’s third-row option and explore the pros and cons. We’ll also provide the current options for Nissan with the third row of seating in this post.

The Rogue is a small vehicle in the category of SUV. Considered a subcompact SUV, the Rogue was one of the only crossovers to offer a third row of seating. The addition of the third row was available with a “Family Package” trim level. We wondered how they squeezed that third row in when most others didn’t. Here is a list of the pros and cons of that third row of seats:

Choosing a Rogue with a third row has its advantages, especially for families with younger children that need extra seating. But, a group of six or seven adults will likely have an uncomfortable road trip with little space to store their stuff.

The reviews of Rogue’s third row are mixed. Most car experts found it to be a tiny and useless seating option. They were happy to see it get lost. The folks who opted for the third row, those families with young kids, for example, found it to be an extremely convenient and affordable car choice.

Crossovers in Rogues' class are best known for the comfort and storage capacity based on five passengers.

Does the Nissan Murano have a third row? 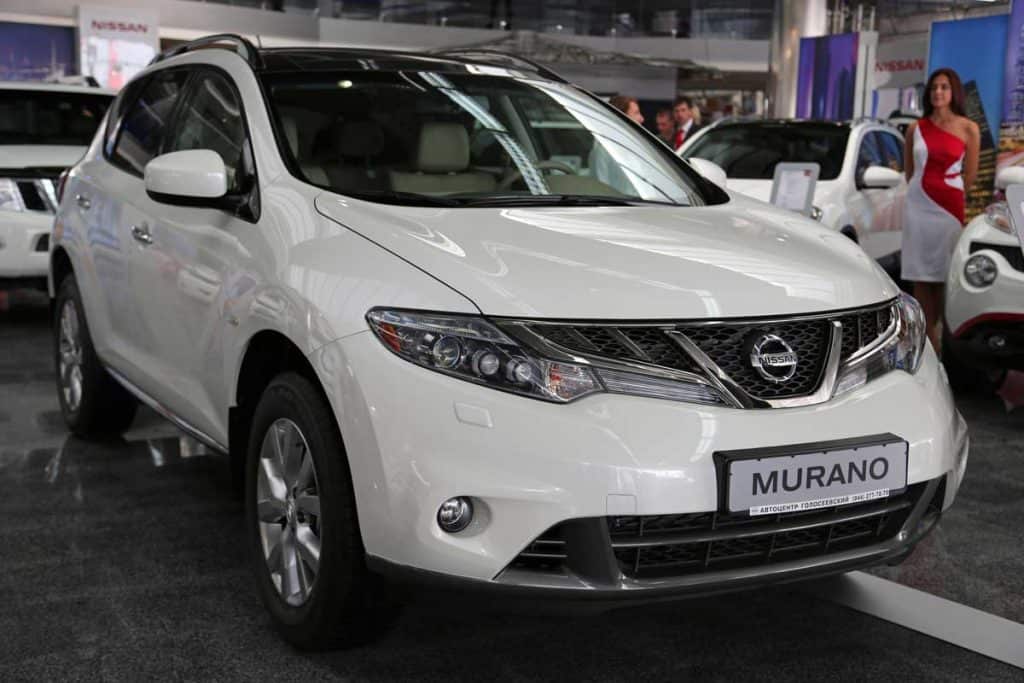 The Murano is Nissan’s midsize SUV that is like the Rogue but more luxurious. The Murano does not have a third row. Its roomy cabin seats five passengers comfortably in its two rows.

If you are in the market for a vehicle that seats more than five passengers, Nissan has other options to explore in its lineup.

What Nissan Vehicles Have 3rd-Row Seating?

Sometimes we need more space. Maybe you have a large family, or perhaps you haul around large sports equipment. Having the option for a larger SUV with added seating and cargo is a winning combination for comfort. 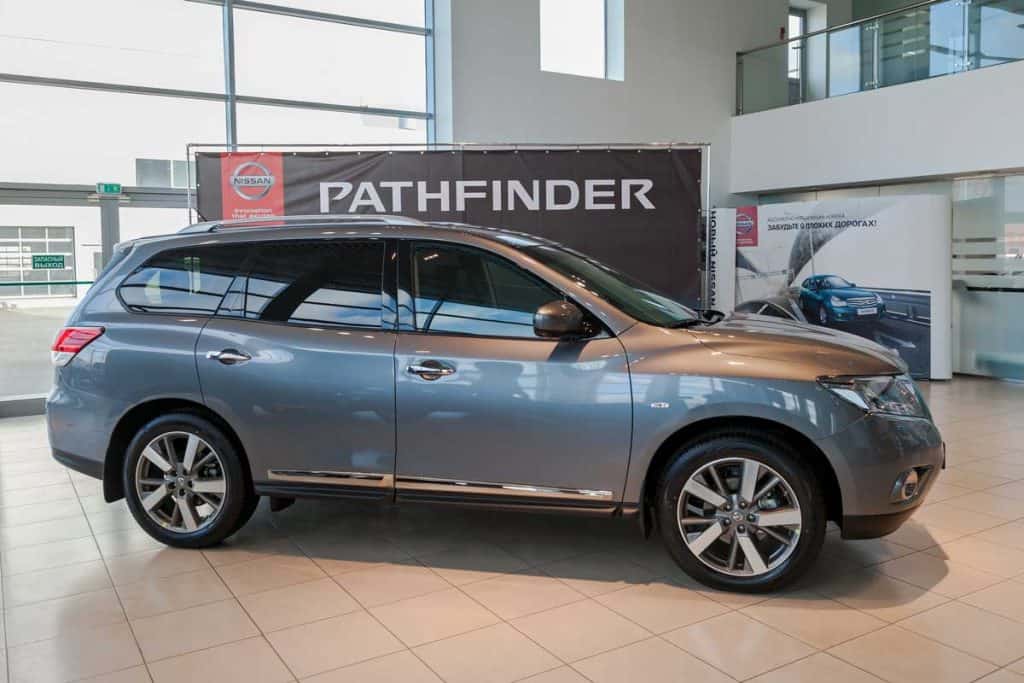 The Pathfinder seats seven passengers. Its EZ Flex Seating System™ creates an amazingly flexible interior. The second row can slide back and forth, providing an extra five inches of legroom to the second or third row. The second and third row of seats also reclines for added comfort. There’s also a unique LATCH AND GLIDE™ system. A child’s car seat can slide forward when installed in the second row so that the third row is easily accessible for other passengers.

All the seats in the second and third rows fold flat. This creates almost 80 cubic feet of cargo space. And, there is extra, hidden-away storage under the floor that can be accessed even while the third row is in use.

The Armada is the largest in Nissan’s lineup. Its three rows seat up to eight passengers. Adults will fit comfortably in any seat, including the third row. The second row is available with captain’s chairs, which reduces seating to seven.

The third-row seats are power seats. The split-folding seats will lie flat with the simple push of a button. All the Armada’s seats can fold flat. With seats folded, there are 95.4 cubic feet of cargo.

Do You Need Third-Row Seating?

Losing the third row in the Rogue doesn’t mean there isn’t a Nissan option for you. But, if you’re looking for a third row in a newer model, you will need to move up to a large SUV and increase your budget.

The third row of seating costs money, no matter which vehicle you choose. If you are in the market for a smaller SUV, you might find a previously owned older Rogue model with the third row installed. The third-row option that was eliminated as of the 2018 model doesn’t seem to be on the radar for Nissan. It’s worth looking into if extra seating is a feature you need occasionally for a lot less money.

When shopping looks for a third-row Rogue, look for models that are older than 2018 and have an S or SV trim level with the Family Package already installed. And keep in mind the Hybrid models did not come with a third-row option.