When you are thinking of buying a new or used pickup, one of the possible options you may consider is the Nissan Titan. If that is the case, you may wonder if the Titan is available with a diesel engine. We have researched this for you and have the answers for which you are looking.

In this post, we'll discuss these models in greater detail and why Nissan stopped offering the Titan with a diesel engine. We'll also discuss the added benefits of the gas engine in the Nissan Titan, so be sure to keep reading. 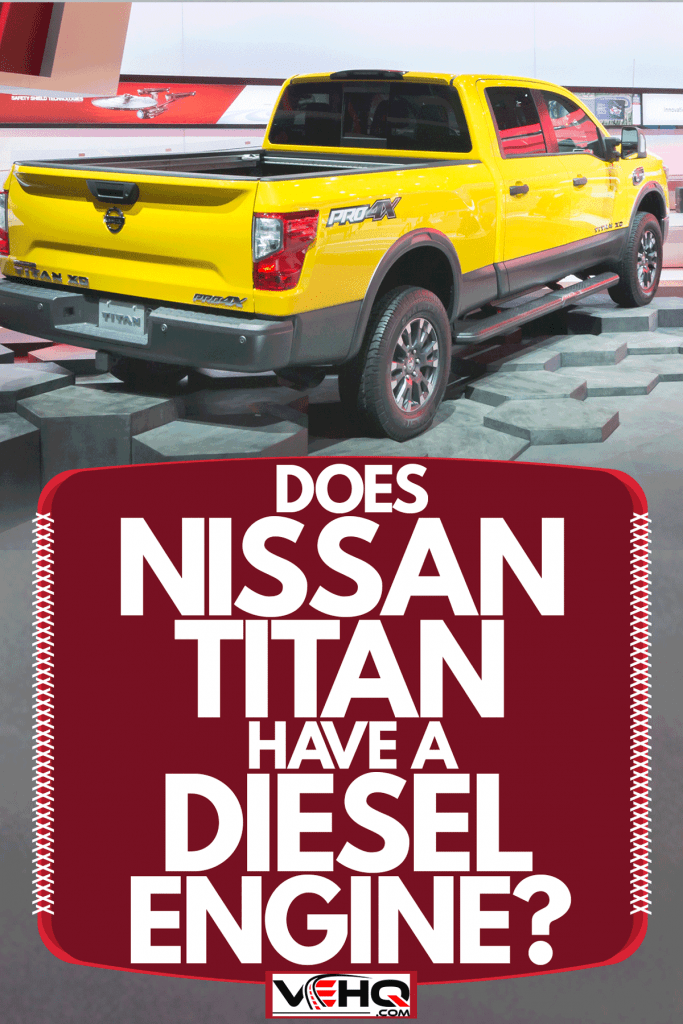 Nissan did not offer any diesel engines during the first few years of production of the Titan. From the Titan's first appearance in 2004 all the way through the 2015 model year, the only engine they offered was a 5.6L gas engine. There was also no Titan XD during that timeframe, only the standard Titan.

But for the 2016 model year, Nissan introduced a diesel engine for their Titan truck. No longer was the standard 5.6L gas engine the only option, you could choose the 5.0L Cummins turbo diesel V-8. This engine was only available in the heavy-duty version of the Titan, the Titan XD, which was also new for 2016.

The Cummins turbo diesel offered 310 horsepower and 555 lb-ft of torque. Those numbers gave the Titan XD the ability to tow up to 12,640 pounds and gave it a maximum payload of up to 2,420 pounds. Many people considered it a very good towing vehicle.

This option did not last long, though. 2019 was the last model year you could get it. Since the diesel-powered version was not popular with consumers, Nissan wanted to simplify its lineup and focus on the gas-powered version. Starting with the 2020 model year, Nissan offered only a retuned version of their gasoline engine. This retuned engine came with a minor increase in performance over the older version.

Nissan offered the diesel engine to those who preferred diesel to gas and to those who wanted the increased towing capacity it offered. The diesel option allowed about an additional thousand pounds more tow rating, but it did so at the expense of around 500 pounds of payload capacity.

Diesel Engine Vs. Gasoline Engine In A Nissan Titan

While more people selected the gas engine over the diesel, there are some advantages to the diesel in the right situation. If you require that extra bit of towing capacity, for example. Diesels often get better fuel mileage as well, though the added expense of diesel fuel in most places partially offsets that.

Many drivers prefer the gas engine because it feels more responsive when driving. The gas engine produces more horsepower than the diesel engine, but it also offers far less torque.

Part of the reason for the lower payload capacity in the diesel-powered Titan XD could be the fact that the diesel-equipped Titan is much heavier than the already heavy gasoline version. It comes out to nearly 700 pounds heavier with the same trim and options.

Below are some of the ratings and capacities for the Titan XD diesel and Titan XD gas. We do not show the standard Titan, since the diesel was only available on the XD models.

These factors, along with the fact that a lot of people do not often tow large loads, may explain the reason the gas version was more popular.

If the specifications above don't completely explain why many people considered the as engine a better option in the Titan XD, consider these other benefits the gas engine offers:

Given all these reasons, you can see why most people who drive a truck regularly may choose the gasoline version of the Titan XD over the diesel. It is cheaper to buy, easier to refuel, cheaper to repair, and feels more responsive to drive.

The $4,000 difference in price may have made many people think the diesel was a bad option. The biggest thing the diesel had going for it was the higher tow rating, which many people do not need anyway.

How Long Does A Nissan Titan Last?

Most people report good reliability on their Nissan Titans. Nearly everyone with over 100,000 miles on their Titans report only regular maintenance and minor issues. A lot of people say they surpass 200,000, or even 300,000 miles with few major problems.

The one exception to this is brakes. There seem to be a lot of complaints about the brakes. The problem usually comes down to the rotors needing to be replaced sooner than expected.

We found a lot of reports that some earlier year Titans, those around the 2004-2005 model years, had problems with the rear differential. It seems Nissan fixed the issue, because there aren't a lot of complaints other than for those few years.

Other than that, you can expect to repair or replace some engine accessories after the miles add up and you pass 100,000 miles. Parts like alternators, water pumps, starters, or power steering pumps are the type of thing that may need attention. This is common on a lot of higher mileage vehicles, not specific to the Titan.

For more on this topic, check out our post, How Long Does A Nissan Titan Typically Last?

How Reliable Are Cummins Diesel Engines?

Many people consider the Cummins diesel to be one of the most reliable engines available. There are a lot of people who put several hundred thousand miles on theirs without any trouble at all. This is often in excess of 300,000 miles. Other than the typical maintenance required with any diesel, they seem to be incredibly reliable.

Is Gas Or Diesel Better For An Engine?

Whether a gas or diesel engine is better for an engine depends largely on how you use the vehicle. Diesel engines usually have better torque, which is good for towing, and they offer better fuel mileage. But a lot of people find gas-powered vehicles more responsive to drive and easier to maintain.

While many people will opt for diesel for towing, there is an added expense, since diesel-power vehicles usually cost more to purchase. They also cost more to repair. At the same time, they require repairs less often, and can last several times as long as gas engines.

There are many studies comparing the total cost of ownership between gas and diesel, and the findings vary. Some report that the diesel will cost more over time, some report that the gas does. These totals count the cost of repairs, fuel, maintenance, and other normal expenses. In the end, this makes it a bit of a toss-up as far as which costs more.

That leaves it up to how you drive. Many people say the gas motor is better if you drive shorter distances, such as to and from work or the store. But some of those same people prefer the diesel for long road trips, especially if they are towing.

If you consider these recommendations, most people will want the gas motor for a daily driver, and will save the diesel for a truck that regularly pulls large campers or trailers for long distances.

While Nissan offered a Cummins diesel engine on the Titan XD from 2016-2019, it was not a popular option. Starting in 2020, they dropped that motor from their lineup, and instead produced all Titans with a revamped 5.6L gas engine. If you want to know more about Nissan Titans and diesel engines, check out these other articles:

Does The Nissan Titan Have Apply CarPlay?