So, just how much is everyone paying for those new pickup trucks you see rolling around town these days? If you are in the market for a new truck, it's a good idea to find out what you can expect to pay. To that end, we have gathered prices for all 2020 pickup truck models, including the starting prices for each trim level.

As you can imagine, prices are much higher than they used to be, especially for the top-end models. Of course, safety tech, tow ratings, and engine power and efficiency have all skyrocketed as well. As you will see, the price for all of these advancements is passed on to the consumers. 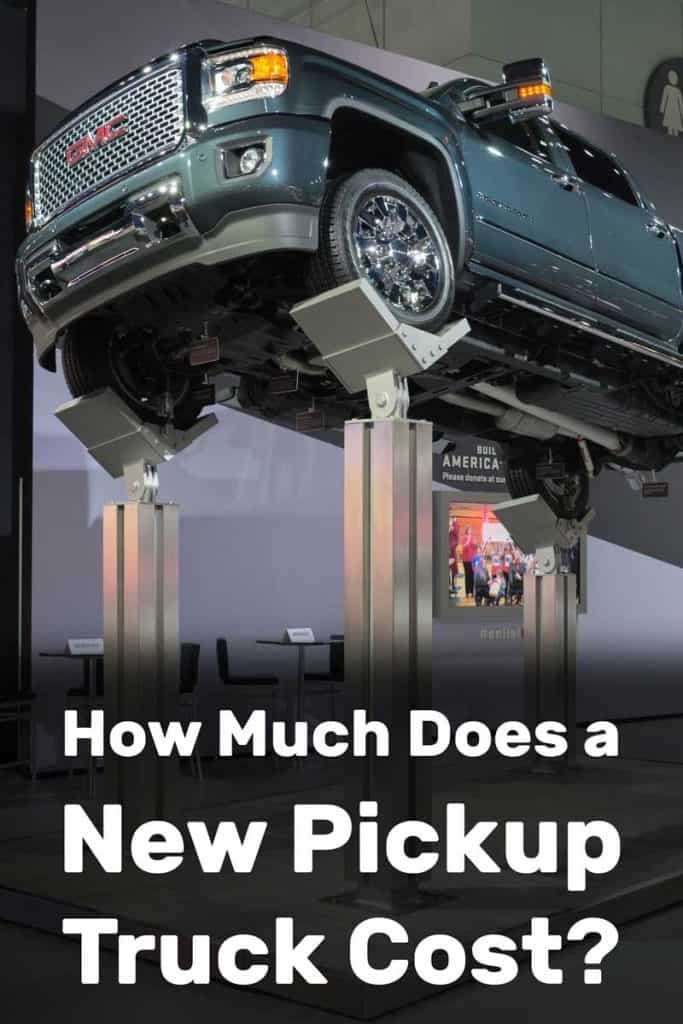 And here are the midsize pickup truck price ranges for all 2020 models:

But wait, there's more. Sure, this list gives you a vague idea of what you can expect dealerships to charge, those are some mighty big ranges, especially for the full-size trucks. To break it down further, let's now see the starting price for every trim level on these trucks, from the bases to the Platinums (and Denalis).

Now it's time we take our deep dive. While it would take way too much time to break down each variation within each trim, we will provide you with the starting prices for each model's trims.

Just keep in mind that there are usually multiple optional add-ons such as cab style, bed length, engine displacement, and 4WD that can drive the price up even more.

First, let's examine those ever-popular, do-it-all models: the full-size trucks. This includes both half-ton, 3/4-ton, and 1-ton models. Because of their immense popularity, automakers love to give the people what they want. So, most come with a vast array of trim levels, engines, and everything else as options.

And those upper-level trims will include a bunch of extras compared to the base models. We are talking about more than leather and a sunroof, too. For example, most include things such as a crew cab, 4WD, and an optional engine.

So, just keep that in mind when you are perusing the prices. If you option a base model with those types of upgrades, the resulting price will be much closer to that of the top-tier trims than the price shown here for the lowest-grade base model.

One more note before we get into the pricing. This list shows the manufacturer's suggested retail price (MSRP), which is not necessarily what you can expect to pay at your local dealer. Some may come in slightly higher and some dealers can offer up to several thousands of dollars off of the MSRP. It all depends on the market demand for each model as well as each manufacturer's business practices.

Unlike other manufacturers, Ford sells a model above their 1-ton F350. Not surprisingly, then, the F450 takes the honor of having the highest price of any vehicle on this list.

For those needing a more utilitarian truck, however, there are deals to be had with several options below the $40,000 mark, including the F150 XL, which is actually the cheapest half-ton available. And, while it might be hard to find one that cheap, the F150 Raptor's entry price of around $53,000 is an absolute steal when you consider all of the off-road tech and the high-output Ecoboost engine it offers.

Compared to other brands like Ford and Ram, Chevrolet stays away from flashy, ultra-expensive models. Chevy and GMC are notable for not offering any trims above the $60,000 mark.

Does that mean the High Country 3500HD is an uncomfortable penalty box? No way - it simply doesn't offer the insane luxury amenities or price tag of some of the other trucks here.

Coming to the lower end of the spectrum, Chevy can't quite match the lowest prices from Ford, but don't be surprised if you are able to find some great discounts on those prices if you are shopping at the right time of the year.

As you can see, GMC follows the same basic recipe with their Sierra that Chevrolet does with the Silverado. That's because these trucks are nearly identical, apart from some slight variations in trim levels. Still, even the glitzy Denali trucks can't come close to the $80,000 MSRP we see on some of those Fords.

Ram has been making headlines with their new lineup. From the luxurious 1500 Limited to the heavy-duty trucks offering an unprecedented 1,000 ft-lbs of torque, they seem to be hitting it out of the park. Don't expect the competition to rest of their laurels, however.

Pricing-wise, Ram seems to have struck a balance between the insanely expensive Fords and the more budget-friendly GM trucks. The heavy-duty Tradesman models are downright cheap, sitting in the mid-$30,000 range, while the top-end Limited models stay well under the $70,000 ceiling.

Toyota's Tundra has been on the market without a major redesign since 2007. That means it can't match the high-tech options from most other brands here. Of course, Toyota sells vehicles based on their amazing reliability, not its cutting-edge technology. And sales have remained strong, even though there are relatively few trims to choose from.

When it comes to pricing, the Tundra stays competitive through the low- and mid-range but doesn't compete with those top-level Ram and Ford Limited models. I guess it really shouldn't be a surprise that those shoppers looking for reliability also don't want to spend oodles of cash on fancy trim levels.

With the Titan and Titan XD, Nissan offers a unique mixture of trucks. The regular Titan competes directly with the other half-ton trucks like the F150 and Silverado.

Meanwhile, the XD strikes a balance somewhere between the half-ton and 3/4-ton categories. And the pricing somewhat reflects that, with a low $33,000 price of entry. Go all the way up to the Platinum Reserve Diesel model, however, and the Titan XD costs just as much as most other heavy-duty trucks.

Ford's new Ranger currently only offers three trim levels. The base-level XL costs just $24,300, although that is considerably more than the entry-level trucks from GM and Nissan. Ford is expected to introduce more trim levels, including an offroad Raptor version, in the near future. Meanwhile, those looking for the ultimate Ranger must make do with the $32,000 Lariat.

Because it's been around for much longer than the Ford, Chevrolet's Colorado features 5 trim levels. And they seem to have their bases covered, with their midsize trucks ranging from $21,000 all the way to $41,000 for the offroad ZR2 performance version. That's quite a bit of cash, especially when you realize that the Silverado Custom Trail Boss actually costs less!

GMC takes a slightly different approach than its corporate sibling when it comes to the midsize segment. Sure, they have the basic, low-level trucks, but at the top end, the focus is more on luxury than offroad readiness. The All Terrain slots in below the Colorado ZR2, while the Canyon Denali takes up the top spot on the price list. The Denali offers the same Duramax diesel engine capable of up to 30 mpg, but the focus is on coddling, not desert running.

While its Tundra is aging and lagging far behind the American competition, Toyota has the midsize segment in its clutches. For now, at least.

And with plenty of trims available that include 3 separate TRD (Toyota Racing Development) models, it's easy to see why they are so popular. Plus, Toyota has its famous reliability to bank on. And that's especially important when most competitors in this segment are fairly new, untested models.

Ah, the trusty old Frontier. These trucks have been around forever, but luckily, Nissan seems to realize that. If they aren't going to update it, at least they price it nice and low. In fact, the Frontier S is the only truck in the whole country that's offered below $20,000. And even the offroad-ready Pro-4X model costs nearly $10,000 less than the Tacoma TRD Pro or Chevy Colorado ZR2. These aren't the flashiest trucks, but they can still get the job done.

Honda sells its Ridgeline within the midsize truck market, but it is the only vehicle in its class that comes with car bones. That's right, the Honda Ridgeline rides on a crossover-style unibody chassis rather than the traditional ladder frames used by all other trucks on this list.

That means it rides like a dream, but can't tow or haul like most other pickups on the market. And it's not exactly cheap, with the lowest-price RT costing nearly $30,000. But if you only need light hauling and towing capabilities, the Ridgeline is an attractive proposition because of its civility.

What is the Cheapest New Pickup Truck?

Say you want a brand new pickup, and that's pretty much where your requirements end. You don't need to tow 15,000 pounds or haul 4,000 in the bed. You don't care about having the newest redesign or the most powerful engine. You simply need a vehicle with a warranty and a bed and a low price.

For you, there is the 2019 Nissan Frontier S. At $19,090 brand new, this is the cheapest new truck on the market. The S offers a small, 152-horsepower 2.5-liter 4-cylinder engine, and, surprisingly, an extended cab configuration instead of a single-cab. It also offers rear-wheel drive and 5-speed manual transmission, so most of us Americans will need to brush up on our shifting skills.

Wondering what's the upper limit on that price range?

Check out our post about the most expensive pickup truck to see what luxury models can cost.

If you are like most people, you are probably after a great deal on your next pickup truck purchase. That usually means lots of online research and haggling at the dealership. I hope this list helps you decide what price you are willing to accept for your next truck. And, no matter what, good luck with your truck-buying experience!