It's the first thing many pickup shoppers look for: which truck offers the most horsepower and torque?

Power delivery not only makes your truck more fun to drive, but it also helps it do the work you bought it for. Whether you need your truck to tow a huge 5th-wheel trailer up a mountain, haul building materials during the week, or both, power is a huge component of the truck-buying decision.

Dig into the numbers, however, and it's not always clear which truck is best. That's why we have compiled all of the relevant data on both half-ton and heavy-duty pickups on the market for the 2021 model year. Taking a look at all of the specs on the most powerful trucks out there will definitely help you decide which will be your next truck.

In the half-ton field, the F150 offers the most horsepower with its high-output 3.5-liter EcoBoost V6: 450. And, while it's 510 lb-ft comes close to taking the torque title as well, that honor actually goes to the near-HD Nissan Titan XD, whose 5-liter Cummins diesel V8 develops a staggering 555 lb-ft of torque.

Next up is the heavy-duty category, where power and torque are even more important because nearly all of these trucks are destined to haul and tow huge loads. Once again, Ford takes the horsepower crown with its turbocharged 6.7-liter V8 diesel that, interestingly, produces the same 450 hp as the gas V6 in the F150.  As for torque, Ram easily wins that crown with their recently-upgraded 6.7-liter Cummins diesel that produces a nice, even 1,000 lb-ft of torque.

Okay, now you know who the class leaders are. But keep reading as we dig into each manufacturer's engine choices for 2021 to find out which trucks are remaining competitive and which are getting left in the dust. 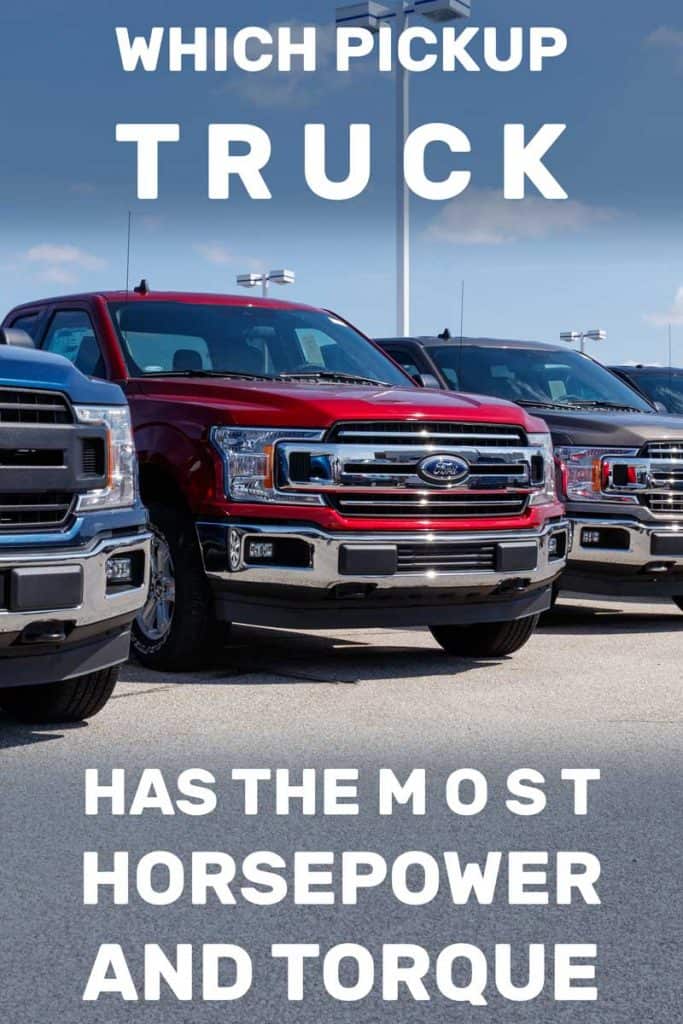 First up, we are looking at the highly-competitive half-ton pickup market. Not surprisingly, the leaders in both horsepower and torque employ turbocharging to get the job done. While these forced-induction engines seem to the way of the future, there are still plenty of naturally-aspirated half-ton trucks to choose from for those who would rather not deal with the extra complication involved with turbocharging.

With 430 horsepower and 570 lb-ft of torque coming from its 3.5-liter V6, the high-output twin-turbo  3.5-liter PowerBoost V6 makes the Ford F150 the undisputed power king. While the engine is only available as either an expensive option or standard on high-level models such as the Raptor and Limited trim package, for those who prioritize power over everything, this is the only half-ton to consider.

Now, there is some dispute as to whether the Titan should even be considered a half-ton. Because its payload and towing specs put it much more closely in line with other half-tons, that's where we decided it should be for this list.

Because it offers a larger diesel engine than any other pickup in this category, the Titan XD equipped with the Cummins V8 easily bests all others when it comes to torque. Sure, the 400 horsepower isn't very impressive in a field where many trucks boast well north of 400, the 413 lb-ft rating means this Titan can get some seriously heavy loads moving with ease.

With the biggest V8 available in any half-ton truck, it should come as no surprise that the Silverado/Sierra twins pack some serious power. And, while their outputs might not be the most impressive in this class, 420 horsepower and 460 lb-ft of torque should get the job done for just about anyone.

There are some potential downsides to consider, however. Being a naturally-aspirated engine, these V8s do require higher rpm to reach their power ratings than the turbocharged competition. And higher elevations will reduce the power output significantly compared to forced-induction engines which can overcome those oxygen-starved environments much more easily.

Still, many truck owners still prefer the sound and feel of these big V8s over the smaller, turbocharged competition. For those folks, there really is no replacement for displacement.

Ram's most potent engine choice, the 5.7-liter Hemi, simply cannot keep up with the more modern options offered by the other manufacturers. Producing 395 hp and 410 lb-ft of torque, this big V8's specs would have been class-leading several years ago.

So, realize that this truck is no slouch - it's just not class-leading in 2021. Still, shoppers can't help but notice when a manufacturer is lagging behind the field, and Ram will likely come out with some new engine options in the near future.

Anyone who knows Toyota knows they bank on one key feature: reliability. And the company's approach to producing the most reliable vehicles possible often means not pushing the envelope when it comes to engine technology. In fact, the 5.7-liter V8 offered as the top powerplant in the 2021 Tundra is almost entirely unchanged since it debuted back in 2007.

It still puts out 381 horsepower to go along with 401 lb-ft of torque. Those were huge figures 12 years ago, but today they just can't' stand up to the competition's best offerings. But if you are more concerned with reaching 200,000 miles and beyond than with 0 to 60 times, the Tundra is still a smart buy.

With a much smaller field, the heavy-duty market features just three real choices: Ford, Ram, and GM. Sure, GM technically produces two different models - the Chevrolet Silverado and GMC Sierra, we will treat them as the same truck because their mechanical specs are identical when it comes to their top-level diesel engine.

That doesn't mean your choice will be much easier, however, as all of these trucks offer hugely powerful engines and historically high tow ratings. So, let's find out where they all stand:

For 2021, Ram offers not one, but two diesel engines - a standard and a high-output version of the 6.7-liter High-Output Cummins Turbo Diesel I6 Engine. While the lesser of the two trails far behind the Ford and GM products, it's the HO version we are interested in today. That's because its 1075 lb-ft makes it the first truck to clear the quadruple-digit mark for torque.

While its 400 horsepower is last in class, torque is king when it comes to the heavy-duty game. That means the Ram can claim a class-leading 35,100-lb gooseneck/5th-wheel tow rating on properly-equipped trucks.

Power may not be as important to heavy-duty shoppers, but it's still an important factor to consider. For those willing to deal with a "paltry" 1050 lb-ft of torque, Ford's 6.7-liter Power Stroke V8 turbo Diesel delivers 475 horsepower; more than any other truck in this class.

With plenty of power on tap for just about any occasion, Ford claims its heavy-duty offerings deliver customers the highest conventional (bumper) tow rating: 21,000 lbs. And it's not far behind Ram with a 35,000-lb gooseneck rating, either.

So, we've come to the last-place finished for the heavy-duty power game. As you would guess, these GM trucks can barely pull a riding lawnmower. Just kidding, of course! Heavy-duty trucks are so competitive today that there is really no clear winner here.

With 475 hp and 910 lb-ft delivered by their 6.6-liter Duramax Turbo-Diesel V8 diesel, these HD trucks are nothing to sneeze at. And, while their maximum tow rating of 23,100 lbs falls well short of the astronomical 35,000-plus figures of the other manufacturers, it is still more than enough for most buyers.

After reviewing the power ratings for all half-ton and heavy-duty trucks, the main conclusion to draw has to be this: there has never been a better time to buy an insanely-powerful pickup. I mean, come one - 1,000 lb-ft of torque?!

Where are we going next?

I can't predict the future, we sure seem to be spiraling towards 500-horsepower trucks and 40,000-lb tow ratings. And, whether you consider that a good thing or not, it does mean that today's trucks are more capable of safely and competently towing and hauling than ever before. Just think about it - if your truck is rated to tow 35,000 lbs, how well will it pull your 12,000-lb 5th wheel? As for me? I will just sit back and watch this amazing power race with popcorn in hand.

Wow! Think about how many horses there is one truck! You should really drive safely with these beasts, in fact, we have a guide just for you. Check out Is Driving a Pickup Truck Hard?. Considering that much horsepower you must know the hazards.

How Big Is The Bed Of Chevy Colorado?

Does The Ram 1500 Take Regular Gas Or Does It Only Come In Diesel?