If you're in the market for a new truck, you may have a desire to support American businesses. Car manufacturers, in particular, are being outsold and outpaced by foreign competition. They're feeling the pressure to cut costs, but American buyers want to keep manufacturing here at home". This motivates car purchasers to shop for something made in the USA. That's why we've made this helpful list, to narrow down the pickup trucks made state-side.

Pickup trucks made in the US include Ford, Chevrolet, GMC, Honda, and Toyota brands. This list contains the 10 trucks with the most US manufacturing and parts. In order of most to least American-made for 2020, they are:

Read on to learn more - we'll explain exactly how this ranking and list were made. We'll tell you everything you need to consider when shopping for an American-made pickup truck. Finally, we'll tell you what companies don't support US manufacturing. This way, you know that your dollars are going into American companies and not overseas. 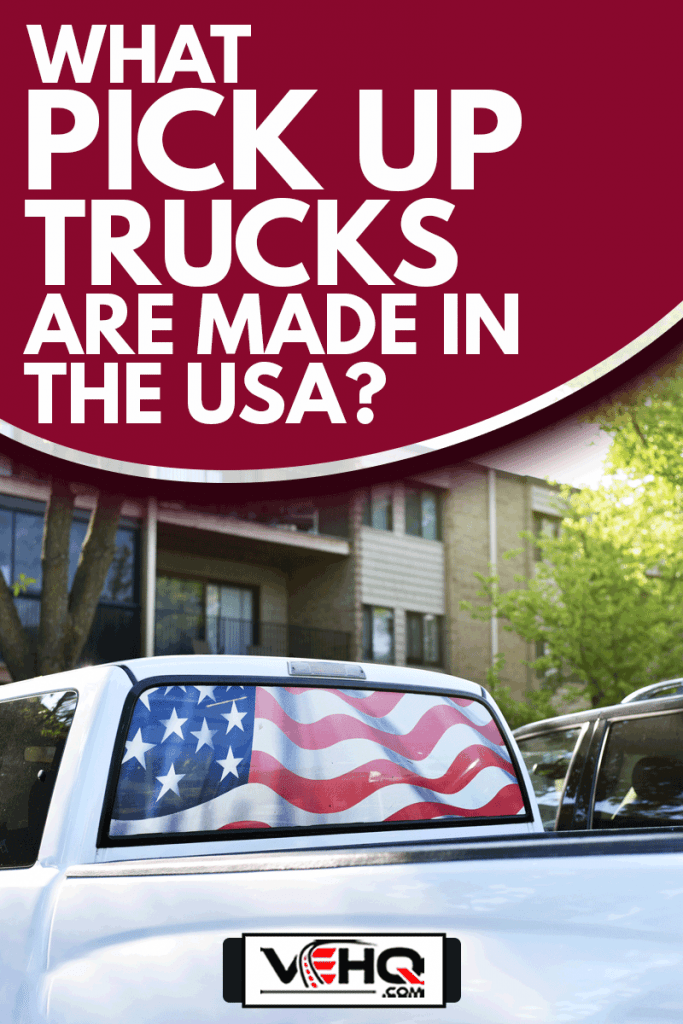 What Are American-Made Trucks?

It's tricky to determine exactly how American a truck really is. It's more than just where the engine is built, or the parts are made - though that's important, too!

Factors also include things like where the truck is assembled. It matters where replacement parts come from. One body component might be made and assembled in the US, while the rest aren't.

As a result, some American companies rank quite low on the list. And meanwhile, some foreign truck makers' scores are surprisingly high! They have large American operations supporting the US economy. 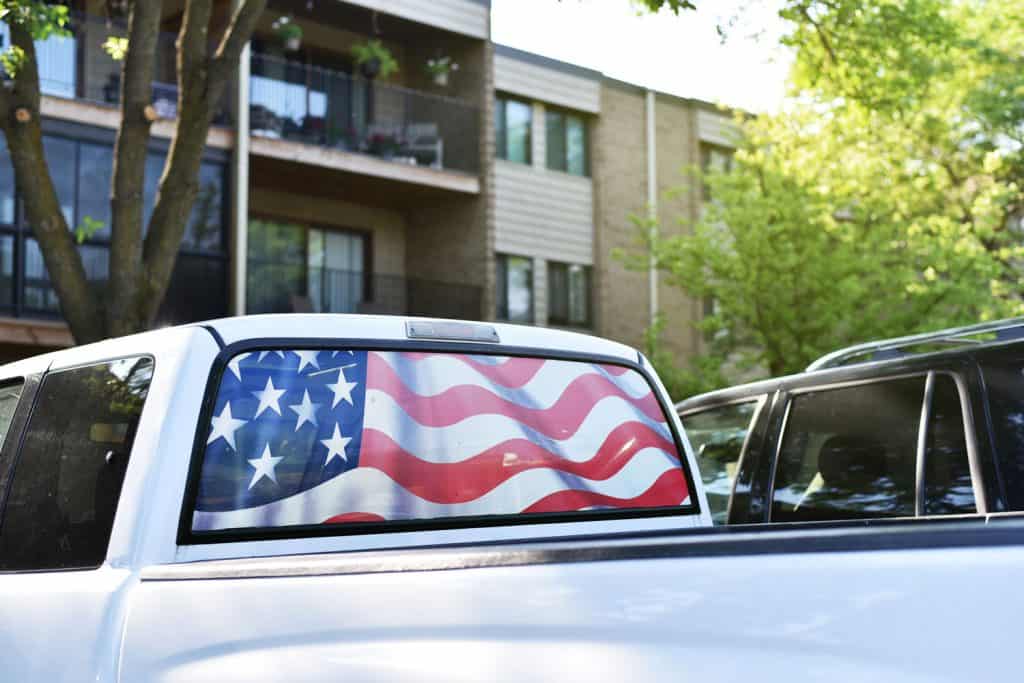 Knowing where the money goes next is another factor to consider. Do the profits go overseas or stay in the US?

This article uses the "2020 Made In America Auto Index" rating system. The Kogod School of Business researches and develops this list every year. It looks at all of these different areas of concern, making a complex question a bit simpler.

In the end, it calculates a bunch of things. But this article uses two important numbers. First is the total domestic content for each vehicle.

In addition, it gives an overall score. This score reflects some of the questions posed above. It looks at how making the vehicle supports a North American supply chain and keeping profits here.

What Pickup Truck Is The Most American-Made? 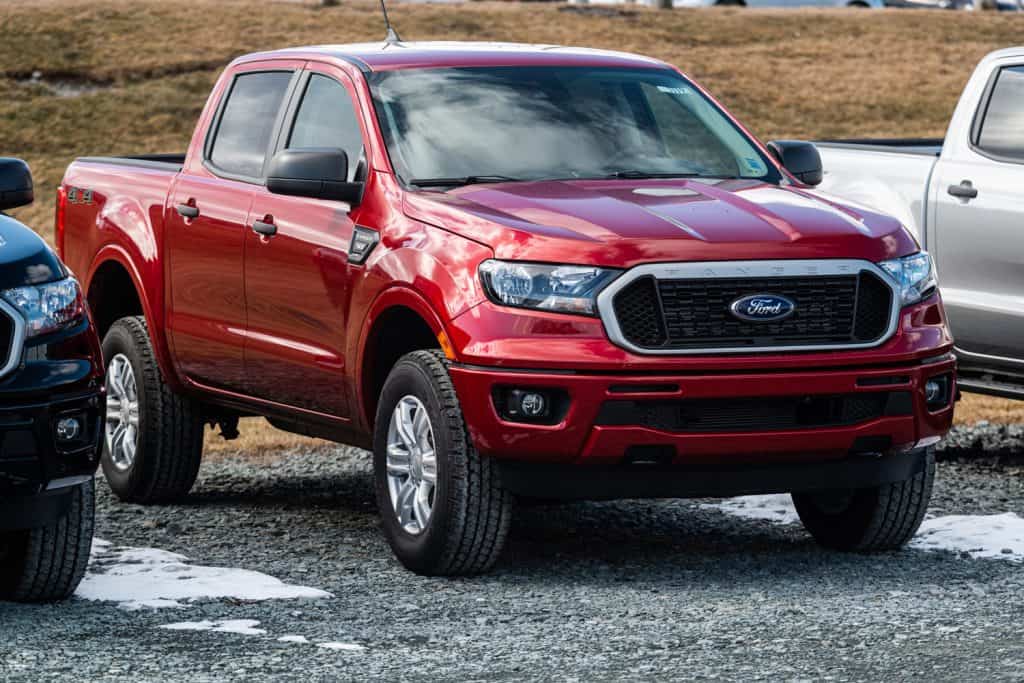 The 2020 Auto Index ranks the Ford Ranger as the top for domestic U.S. content. The engine is US-sourced. The parts are 70% U.S./Canadian. In all, it gets 85 on the index.
It's worth noting improvements by Ford to the Ranger give it this position. In 2019, the Ranger scored only 61. 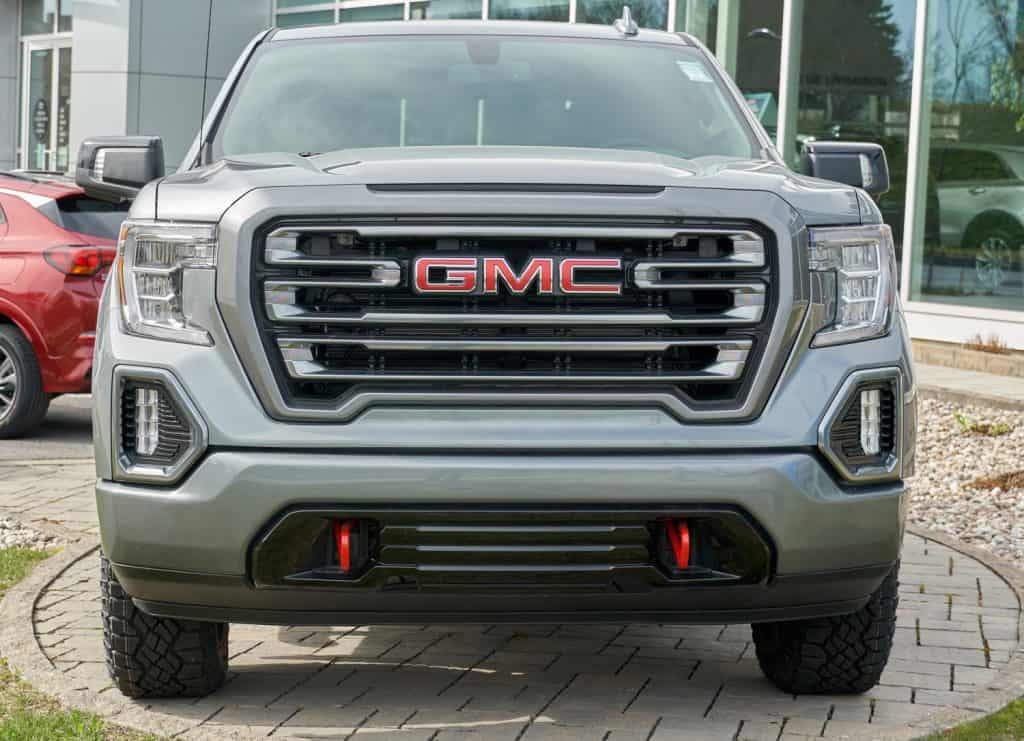 The Ranger is at the top of the list. This is impressive considering it includes vehicles of all types, not just trucks. Several trucks are close behind. These feature the Chevy Colorado, GMC Canyon, and Honda Ridgeline.

What Percentage of the F-150 Is Made In The US?

By this same auto index, the F-150 receives a high rating. The majority of manufacturing happens in the US. It receives a score of 75 total for the 5-liter engine version.
Some other models are a bit lower down. The 2.7-liter model scores 61, as does the 3.6-liter. All three styles contain roughly 50% US/Canadian parts.
It's fifth on our list for pickup trucks. Also, the 5-liter makes 9th on the Auto Index for all vehicles. The F-Series trucks previously got higher scores on the index. In 2015, they placed third and got 82.5 points for total domestic content.

Is Chevy Or Ford More American?

It's a bit tricky to calculate whether Chevy or Ford is more American. For example, Chevy Spark contains only 1% American parts. Its total score is one of the lowest, a scant 12.5.
Conversely, the Camaro is a high 66% in domestic parts. It gets an overall score of 83. Chevrolet scores a 55 average for their cars. Twenty-three vehicles were included in this average.
As far as Ford,  28 vehicles go into the 2020 averages. The lowest-scoring car is the Transit Connect 1.5l and 2.5l. This vehicle contains 10% domestic parts and rates 17th overall. The highest, as already stated, is the Ranger.
This means that Ford and Chevrolet both average 55 for their vehicles in 2020. But GM, the parent company of Chevrolet, does hit slightly higher with 58. 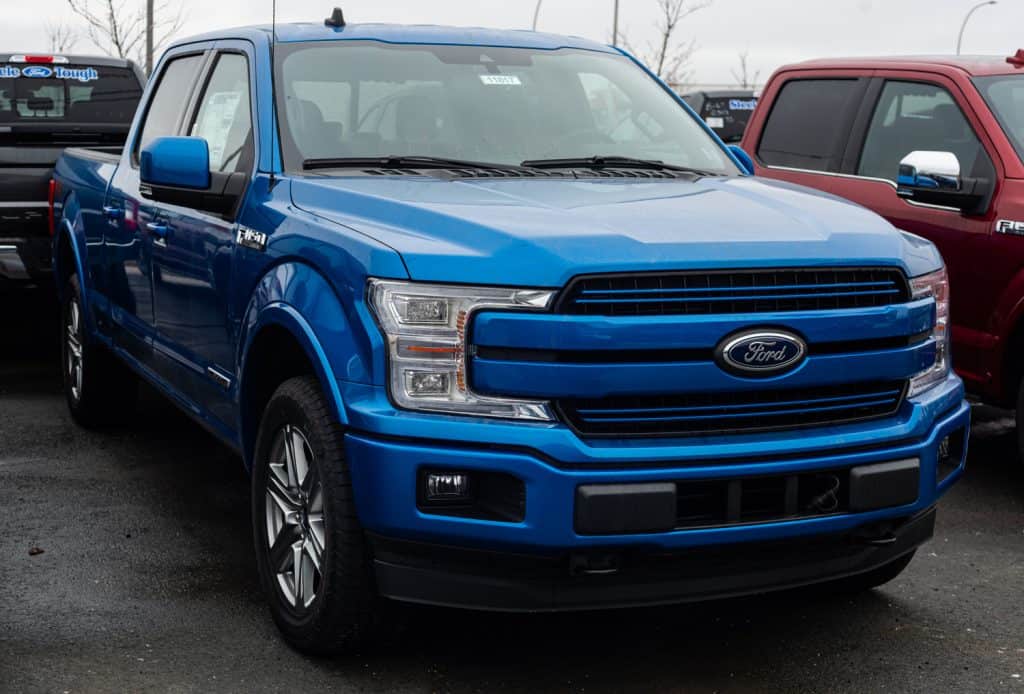 However, if we narrow it down to trucks, there are only a few to compare. These are:

This gives us 4 truck styles. Overall, it makes an average score of 70 for Ford trucks.

In all, this is 6 styles, and an average score of 68. In short, it's probably a toss-up as to which is more American. Both companies offer trucks that rank pretty much the same. However, the Ford Ranger is the one winner that is clearly outstanding in this field.

Is Toyota More American Than Ford? 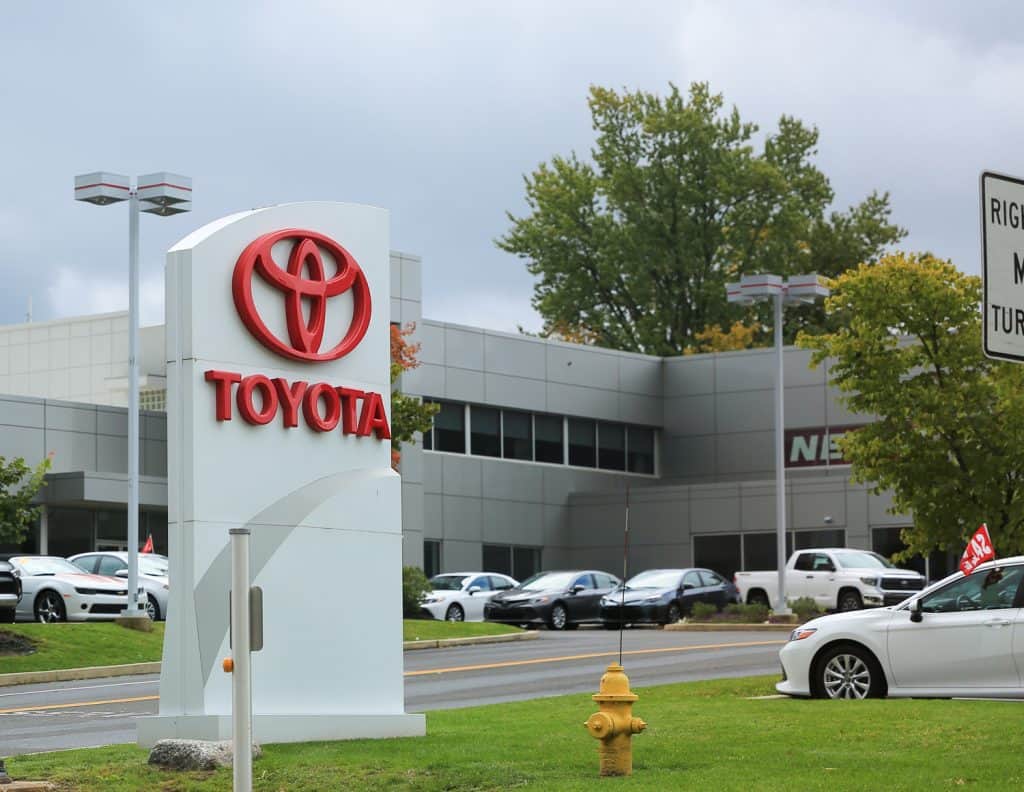 Looking just at pickup trucks, the Toyota models to compare are the Tundra and Tacoma. Tundra's makeup gives it a 60% for domestic parts. It gets an overall 71. The Tacoma scores 55% in parts and 68.5 in total.

This gives Toyota an average of 67.5% in parts and 69.75 overall. Compare this to Ford, which was 55% for American and Canadian parts. Ford's overall score was 70. Clearly, it's once again a close call. Toyota offers more American parts but ranks slightly lower when looking at all things.

Also, it's worth noting that Toyota as a company rates much lower than Ford. Look at all Toyota vehicles, not just trucks, and the numbers are worse. Toyota only scores 60 in total domestic content for vehicles made in the US They get a mere 25.9 for all vehicles manufactured. Ford, on the other hand, scores 67.6 for their US-made vehicles, and 55 overall.

What Pickup Trucks Are Not Made In America?

We live in a world much different than the one of 50 years ago. As touched on above, there's really no such thing as an "all-American" truck anymore. Some of them are closer than others, certainly. But all involve outsourced parts to some degree. Ah, globalization.

That goes the other way, too. There's no such thing as a pickup truck that isn't, at least somewhat, American. At least, not ones that you can buy here in the USA. There are overseas plants that make trucks, of course - but they're only for sale overseas as well.

Current truck manufacturers include Dodge, Ford, Toyota, Chevrolet, Jeep, GMC, Honda, and Nissan. All have plants in the United States, but most of them have plants in other countries as well. Parts come from all over the world, even for the "most American" of trucks.

However, if supporting American companies is important to you, there are some clear trucks to avoid. Little money stays here in the US after your purchase. Not to mention, the companies don't provide many jobs in America.

Nissan Titan and Frontier both get some of the lowest scores on the Made in America index. This isn't very surprising - even the vehicles Nissan makes in America only contain about 50% American parts. For all Nissan vehicles (here and overseas), they score a mere 25 on the index. 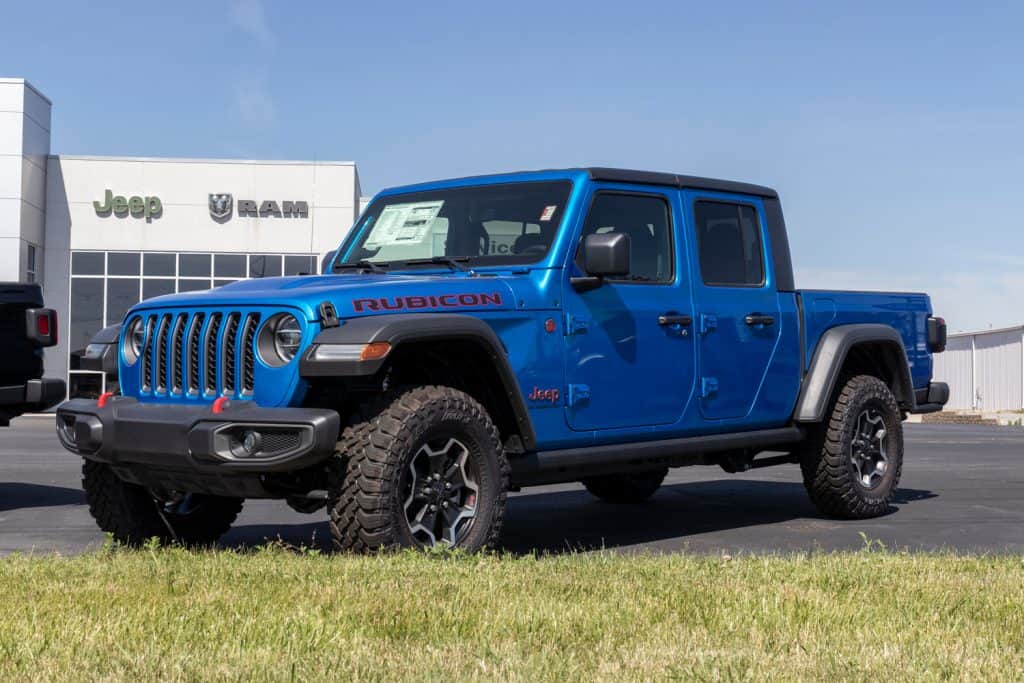 It's a bit surprising that the trucks score so low. Fiat Chrysler overall gets scores rather high in regards to American-made cars. Their US-made vehicles average 64 for total domestic content and 55 overall - passed only by Ford, GM, and Honda.

There's really no such thing as an all-American-made car anymore. But some companies do support the US more than others. If you're looking for a pickup truck and want to buy American, your best bet is a Ford Ranger. The gas models of Chevy Colorado and GMC Canyon tie for next. Honda Ridgeline isn't far behind. Then, the 5-liter Ford F-150 is next.

It's worth knowing that the 2.7-liter and 3.6-liter F-150 aren't as well-rated. Their scores are much lower for American-made parts. Other trucks to avoid include ones from Jeep and Nissan. For example, the Jeep Gladiator or Nissan Frontier. Dodge Ram, owned by the same company as Jeep, also receives low scores on the Made In America Auto Index.

If you enjoyed this article, consider the following:

What Motorcycles Are Made In America?

How Much Weight Can Ford Ranger Carry?