Rust is a common problem in northern climates where road salt is often used to dampen winter's effects on the road. As rust on the underside of a vehicle spreads, it becomes unsightly, and if it progresses enough, it can actually cause a dangerous amount of structural damage to the frame of a vehicle. So, what is the best way to protect the underside of a car from rust? We did the research to bring you the answer.

To best protect the underside of your car from rust, follow this multifaceted approach:

If you still have some additional questions about rust-proofing the underside of your car, don't worry. In this post, we'll discuss the topic at length. We'll also talk about what causes rust to form under a vehicle, whether or not you should buy a car with rust on the underside, how much it costs to fix rust under a car, and more. Without further ado, let's get into it! 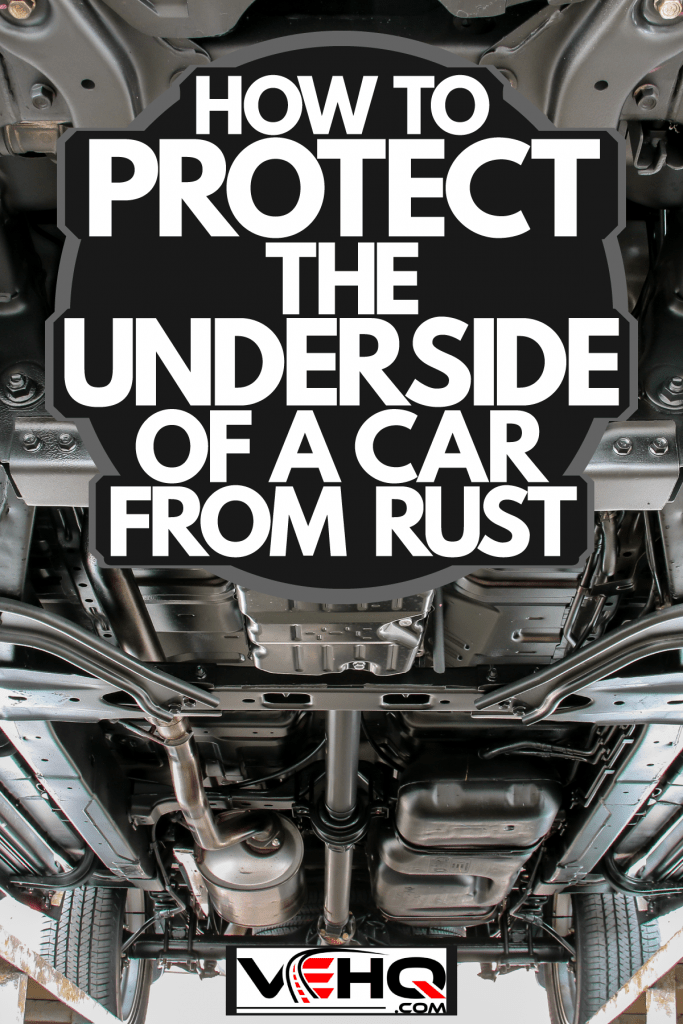 What Causes A Car To Rust Underneath?

Before we talk more about protecting the underside of your car from rust, it's important to discuss what actually causes rust to form there in the first place.

Rust is the byproduct of a chemical reaction between iron and oxygen when some kind of moisture is present. However, steel is also susceptible to rust — although less so than iron — as the metal naturally corrodes. 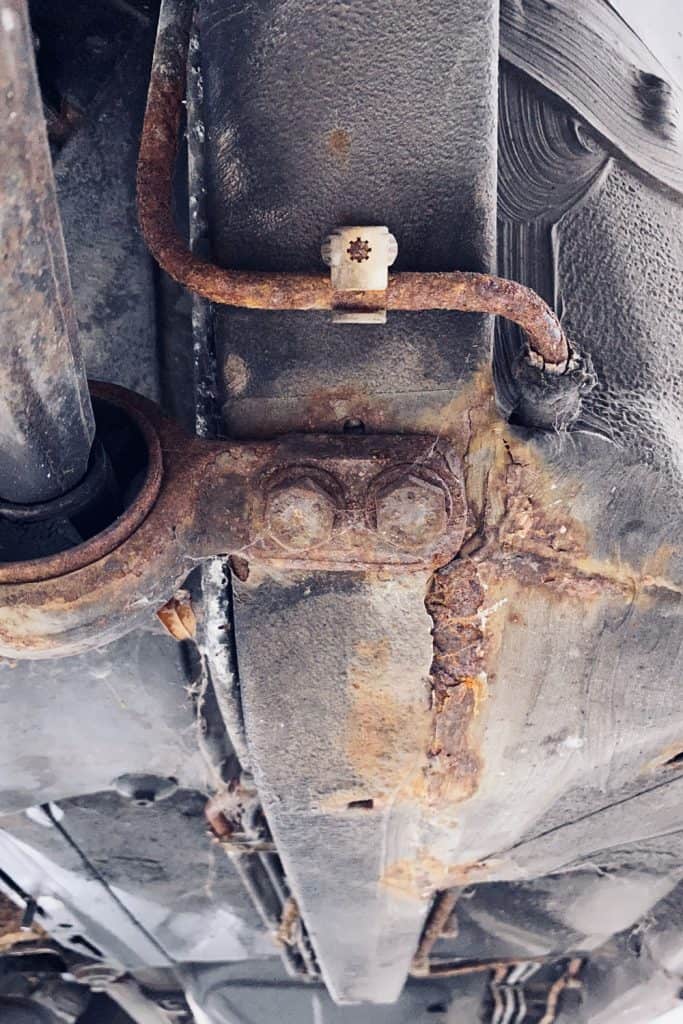 The formation of rust is a natural (albeit unsightly) process that takes place over a sustained period of this chemical reaction taking place. But there are certain things (and environmental conditions) that can expedite the formation of rust. The presence of water — and, by extension, high humidity levels — and salt are perhaps the biggest culprits behind expedited rust formation.

For our purposes here, we'll leave it at that. But if you want to learn more about the specifics of rust formation in cars, check out this post: Why Do Cars Rust? (And How To Fix That)

Protecting The Underside Of Your Car From Rust

Here we'll talk more about some of the things you can do to prevent rust from forming underneath your vehicle. For the best results, we recommend following each tip for a multifaceted, blended solution.

If you live in an area that sees high levels of humidity or heavy road salt use in the winter, consider getting an undercoating treatment. An undercarriage treatment is simply a thick tar-based abrasion-resistant coating that protects the sensitive metal components under your vehicle from rust culprits like moisture and road salt.

This treatment will require professional application, as the proper application is critical in keeping rust at bay. In addition, it's best to have an undercoating applied when the car is new, as this treatment might be less effective if a substantial amount of rust has already begun to form under an older vehicle.

What Is The Best Car Underbody Protection?

If you're confident with your automotive DIY skills, you can certainly attempt this project at home. This product by Woolwax will help make the job easier:

Simply apply this aerosol undercoating protector to the desired components on your vehicle's undercarriage. Be sure to apply an even coat.

Wash The Underside Of The Vehicle

If you live in a region that sees heavy winter snowfall, there's no doubt that salt is used on the roads to make them less treacherous. This road salt accumulates on a vehicle's undercarriage and wreaks havoc; salt is arguably the biggest catalyst for rapid rust formation.

If you have access to it, a pressure washer is ideal, as it will make short work of road salt that has made its way into the nooks and crannies of the car's undercarriage. Or better yet, try to find a car wash that has undercarriage sprayers to ensure that any lingering road salt is removed.

If you don't have access to either, a simple water hose (plus a little bit of time and effort) will suffice.

For more information on washing your car, check out this post: How Often Should You Wash Your Car? 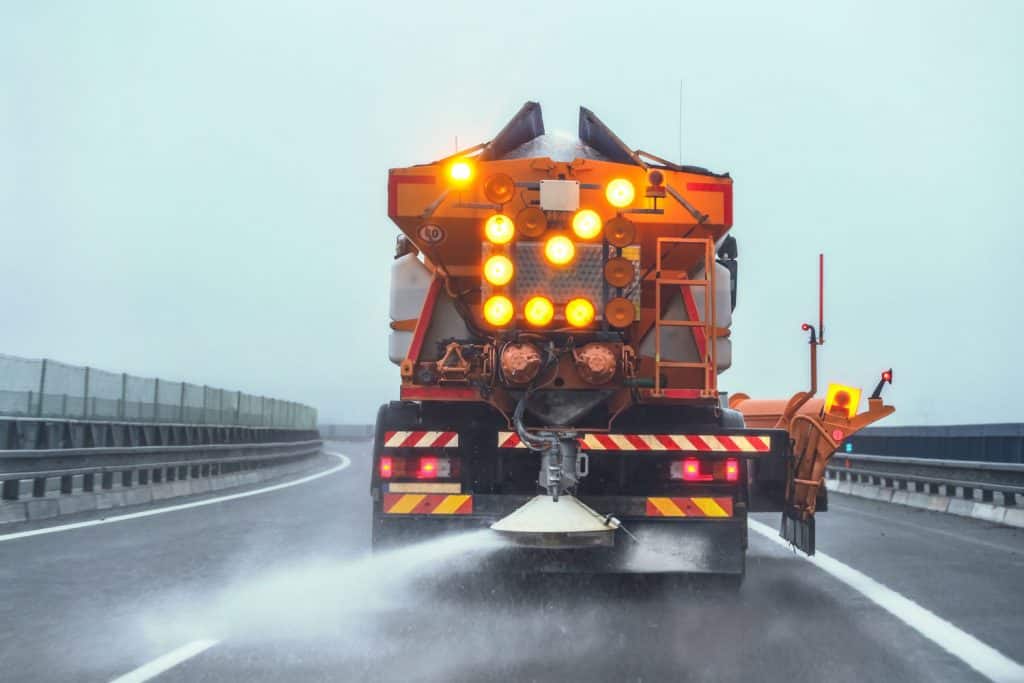 Although easier said than done, try to limit how much you drive if you live in a region where road salt is used. As mentioned, the potential for rust damage significantly increases the more you drive in salty conditions. Do whatever you can — combine trips, carpool, etc. — to limit your car's exposure to road salt.

Keep Your Car In The Garage

Store your car in a garage if you live in a humid climate. Though the humidity itself isn't quite as potent as road salt, it can certainly lead to rust formation on your car's undercarriage. This is especially true if you live in a humid coastal region. The salty ocean air combined with the natural humidity will be more likely to cause rust the longer a vehicle is left out in the elements.

Should I Buy A Car With Rust Underneath?

If you're in the market for a new (to you) vehicle that has some rust underneath, it isn't necessarily a deal-breaker. The fact of the matter is that most cars will get some rust on the undercarriage to some extent regardless of the climate. However, the majority of this rust is surface rust, a type of rust that is typically benign if it doesn't spread or worsen.

For instance, this truck's driveshaft has quite a bit of surface rust. While it might appear concerning, the reality is that such a thin layer of rust poses virtually no danger to the integrity of such a robust component provided the rust doesn't continue to spread and turn into harmful penetrating rust.

The metal components underneath a vehicle can have different compositions and thicknesses, making some parts more impervious to rust. As long as visible rust is relatively limited, it should be no cause for concern. 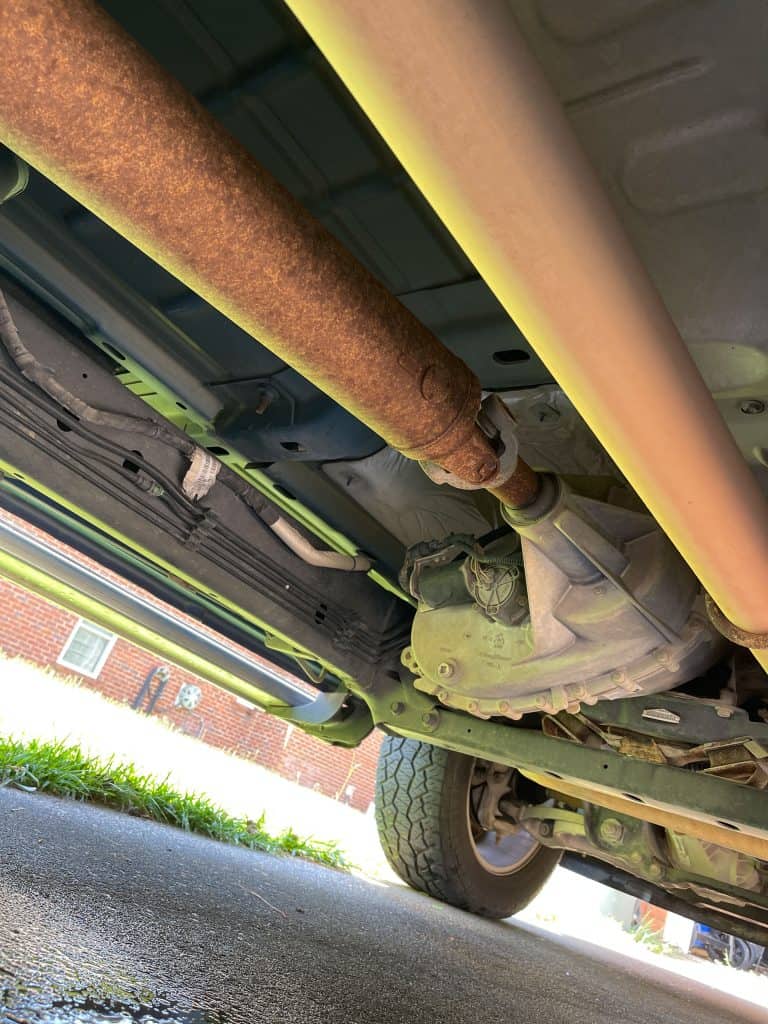 So, some moderate undercarriage surface rust is no reason to turn down an otherwise good deal on a vehicle.

When it comes to assessing a car's undercarriage for substantial rust damage, the frame is the main point of concern. If you can see chunks of the frame missing, this is an indication that rust has started to eat away at the frame itself.

Unlike surface rust, this condition is quite severe, as a rusted-out frame is likely structurally compromised, which could present serious safety concerns. If this is the case, you should look for a different vehicle.

How Much Does It Cost To Fix Rust Under A Car?

It will likely cost a minimum of $500 to fix rust damage on your car. But depending on the extent of the damage, the cost might double (or more).

How Do You Treat A Rusty Car Frame? 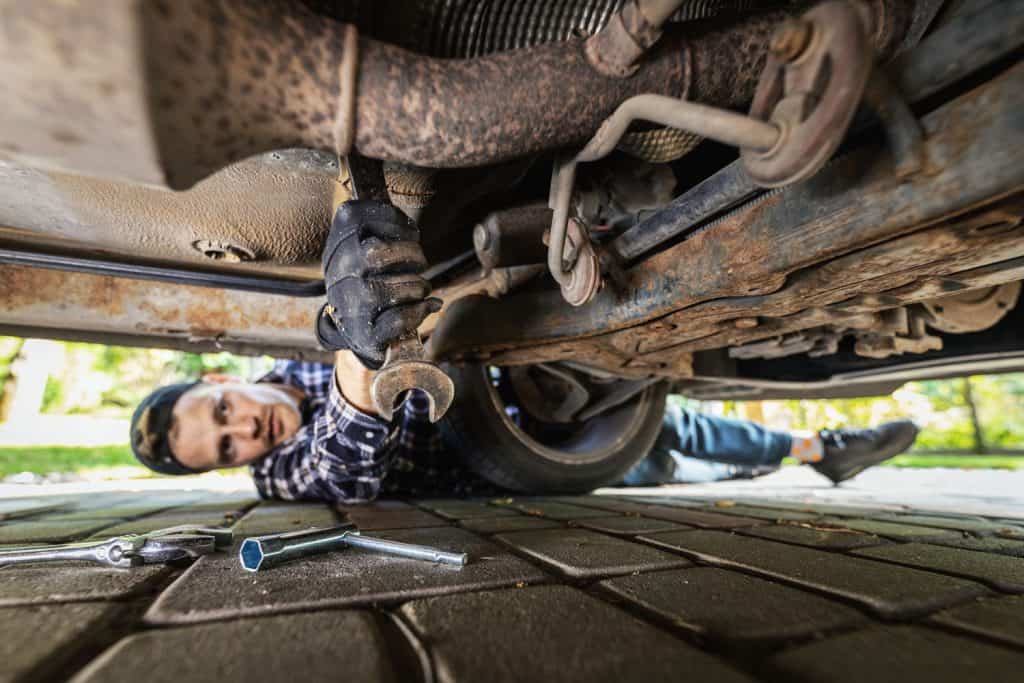 Depending on the severity of your frame's rust problem, the best way to treat it is to simply prevent the rust from spreading. And a good way to do that is with a rust-blocking paint like this one from AGS Rust Solutions:

This spray can be applied directly over rusty spots to keep the rust from spreading. What's more, when dry, the paint will provide a robust protective coating that will deter future corrosion.

If you have some additional tips on preventing undercarriage rust, drop us a comment below!