So your F150 tailgate just recently got damaged. And now, you're looking for a replacement tailgate to fix this. Suddenly, you find a replacement tailgate, but it is from an F150 Raptor. Now, you are unsure if this tailgate will fit your truck. Do not fret, as we have already researched this and are here to tell you the answer.

Continue reading as we will discuss more additional questions and details regarding the topic. Questions such as differences between a normal F150 and a Raptor, how tailgates affect gas mileage, the meaning of "Raptor," and more. We will also suggest a few interesting topics at the end of this post. So stick around! 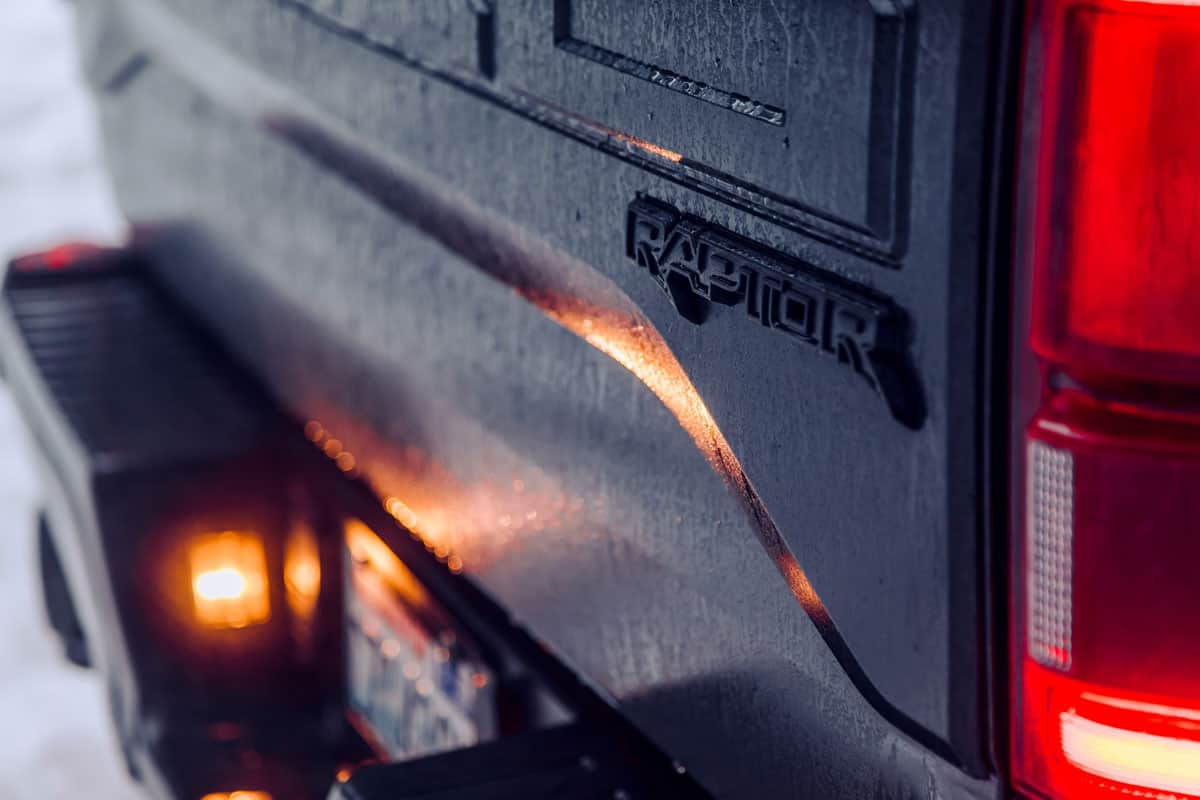 When exchanging parts, the main thing you have to look for is compatibility. In the case of the Raptor F150 and regular F150, their differences are mainly the engine and suspension. The suspension, for example, is more focused on off-road performance for the Raptor. Other design aspects differ, like truck length and width, again favoring off-road capabilities in the Raptor models.

Tailgates are relatively similar and do not generally affect performance. So, as we've said, you can interchange F150 tailgates if doing so on the same year model trucks.

Below is a sample video of a Raptor tailgate fitting on a regular F150 truck.

You can get a tailgate applique from Ford, depending on the look you want, for F150 or Raptor styling. You can use this as a replacement on your swapped tailgate. This would be easier if you only want a Raptor-looking tailgate with your F150 instead of having the entire tailgate replaced.

Here is a short video about the tailgate applique setup.

The great thing about Ford F150 trucks, or Ford trucks in general, is they have interchangeable tailgates. So if you needed a replacement tailgate, it would be relatively easy.

Just a reminder that some tailgates will fit better, especially if they come from the same generation. Older model tailgates might have compatibility issues with newer ones, mainly if the year models are so far apart.

What is the difference between an F150 and an F150 Raptor? 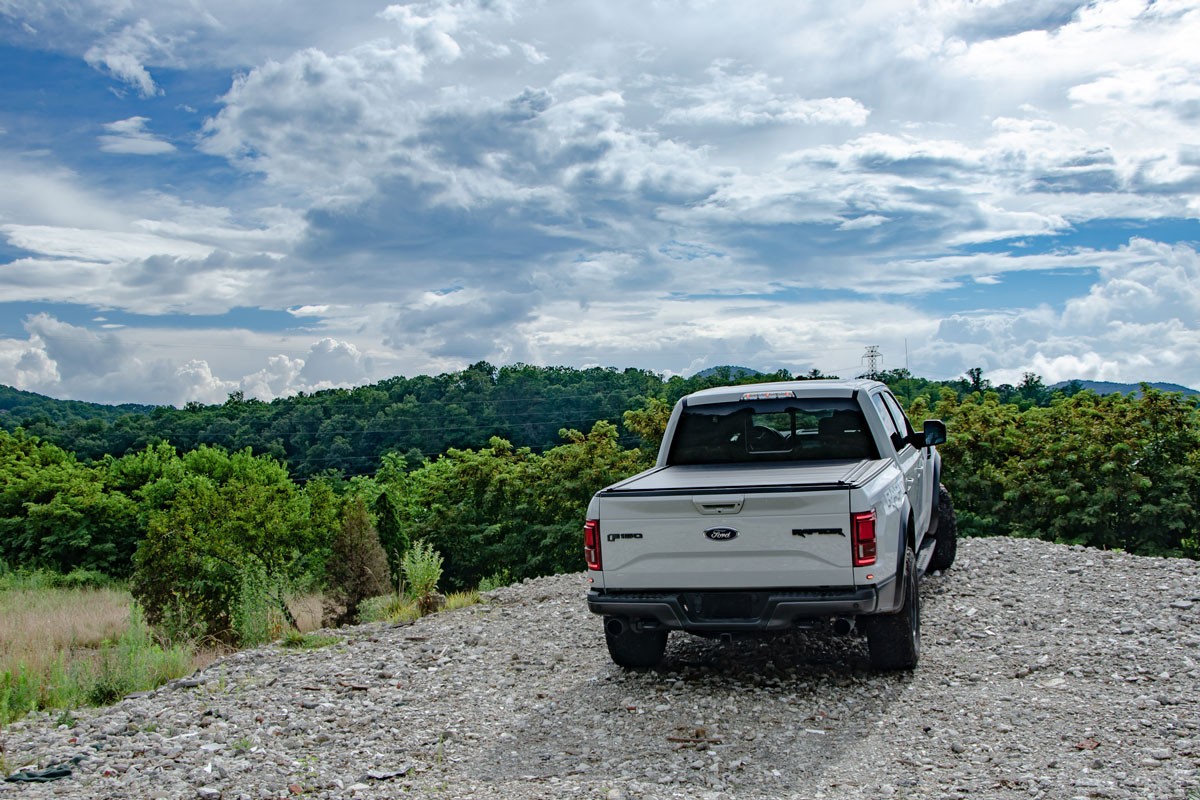 As we have discussed earlier, the main difference between both trucks is the power output of their respective engines. The Raptor is more of a performance vehicle geared for off-road capability. The Raptor will come in stock with higher ground clearance and chunkier off-road tires than a regular F150.

The Raptor might be the superior vehicle on paper, but don't let these numbers fool you. Despite having the bigger engine, the Raptor only has a towing capacity of 8,200 lbs and a payload of 1400 lbs. In comparison, the F150 is rated to haul up to 3,325 lbs and has a maximum towing capacity of 14,000 lbs.

This is because the regular F150 is designed to be a work truck than a performance vehicle. It will have parts like suspension designed for heavy cargo. It will also have lower ground clearance compared to a Raptor. But regular F150 trucks will also have a 4x4 option, making them still capable of off-roading.

How much wider is a Raptor than a regular F-150? 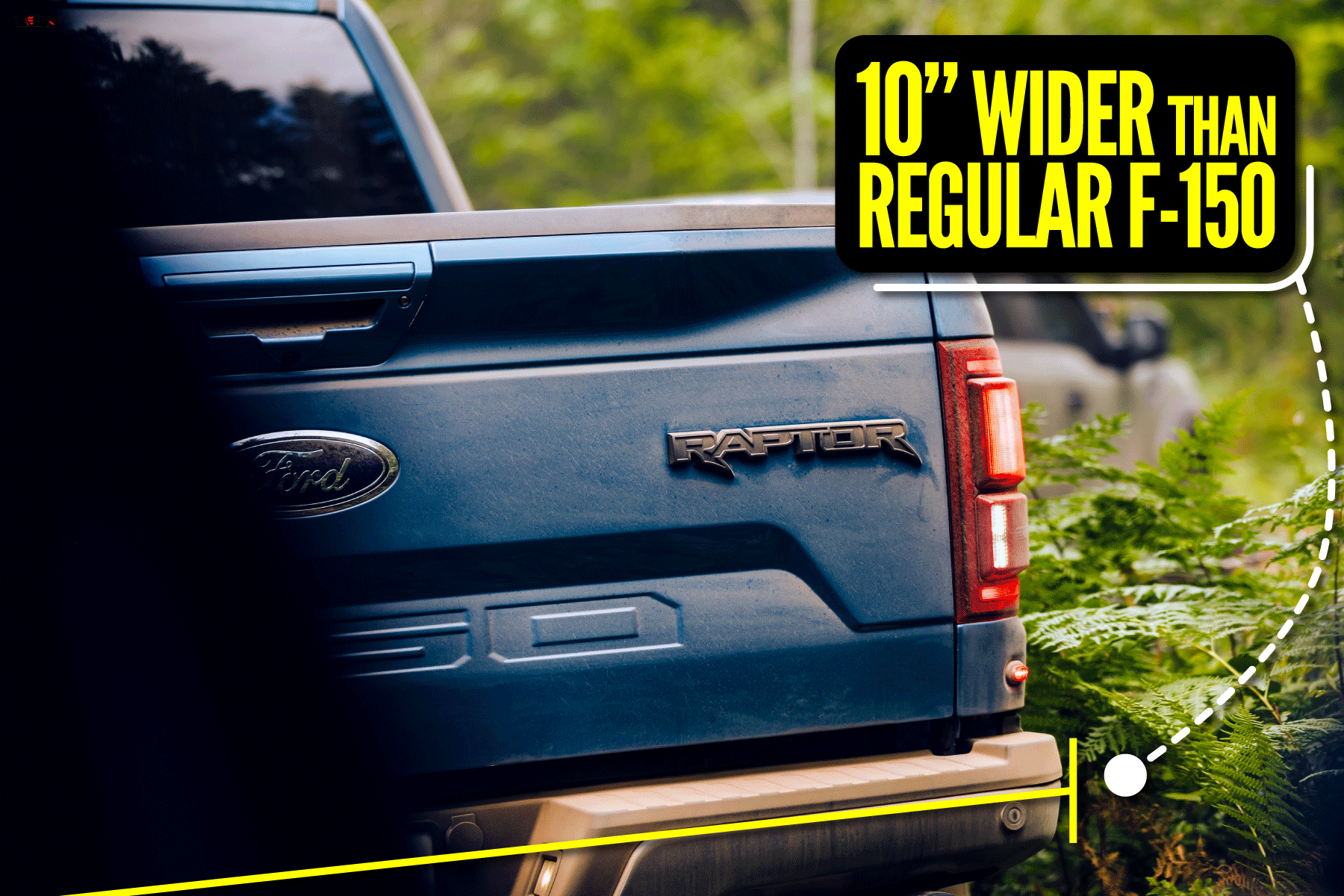 One design difference between the Raptor and non-Raptor F150 is how wide both vehicles are. The Raptor is at least 10 inches wider compared to its counterpart. This makes the Raptor a hassle to park and drive around in tight places like heavy traffic or city driving.

In places like drive-thrus, a regular F150 would be easier to maneuver compared to a Raptor. The Raptor is even wider compared to a Ford Tremor, another off-road trim from Ford.

How much for a Ford tailgate replacement?

You can expect to pay in the ballpark range of $100 to $500 when replacing your Ford tailgate. Do remember that this is not a fixed price, and many factors can affect what you will actually be paying. Consider:

You could also try installing the tailgate yourself to save a few bucks, but this task might require some DIY automotive know-how.

This a reminder to make sure that replacement parts are compatible before purchasing. Double-check whether the tailgate replacement's measurements and dimensions fit your truck.

Check to see if the clamping points fit. If it is from a scrap yard, surplus, or secondhand, make sure there is not damage to the tailgate. One advantage of having your tailgate installed by a good auto shop is that they will have complete tools and can give you expert opinions and solutions if you ever run into a problem during installation.

Where should I look for Ford tailgate replacements?

Before looking for tailgate replacements, have your existing tailgate checked first. You might not need a replacement in the first place. Have your tailgate get inspected first by a mechanic. Check if they can repair or remedy the damage.

You can also bring it to a machine or auto repair shop to have it straightened out or repair any dents. Broken latches and locking mechanisms can be replaced.

If you determine that you need to have it replaced, local dealerships, auto repair shops, local junk yards, and surplus stores are all great places to find a replacement tailgate.

You could also look at online platforms like eBay, Craigslist, and Facebook Marketplace. We recommend seeing the tailgate before purchasing, especially if it comes secondhand.

Can you swap tailgates from different brands? 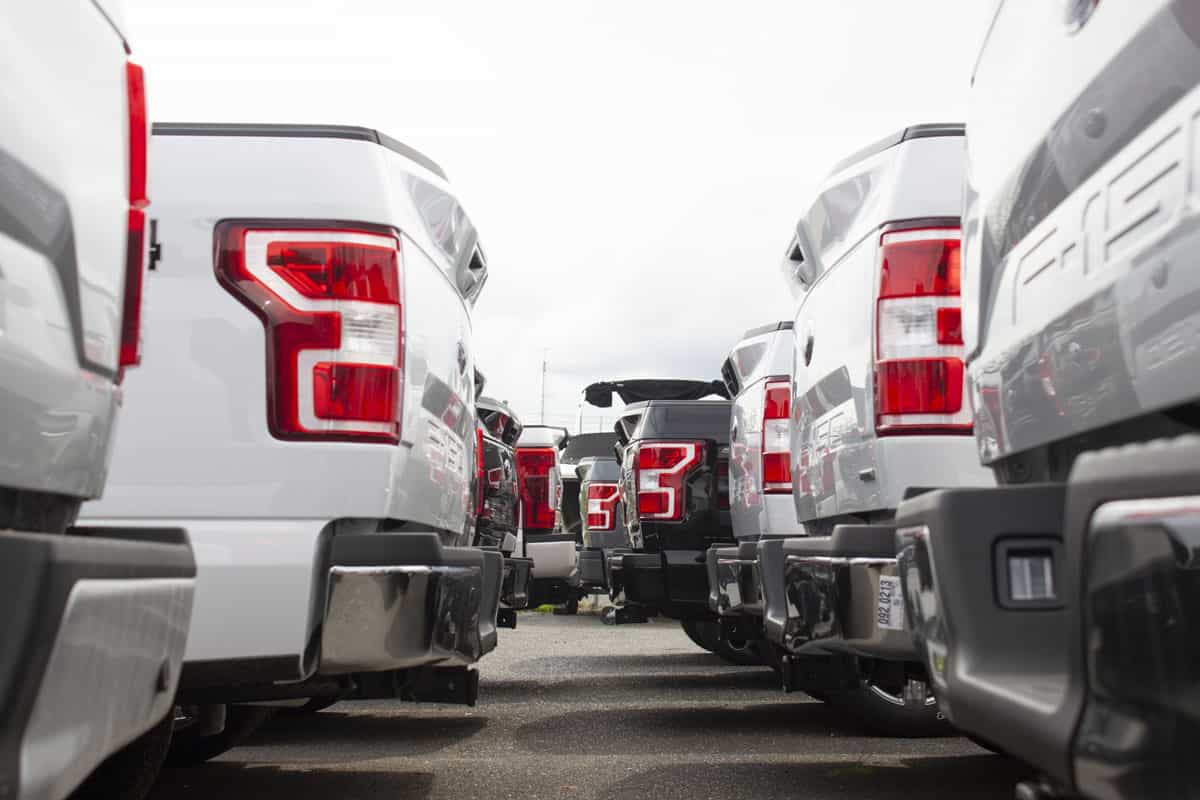 Each truck brand will have its own proprietary designs with regard to its tailgates. You will have difficulty matching other tailgates from different brands. Even with tailgates coming from the same truck but different model years, generations will still have compatibility problems.

But trucks like GMC and Chevy can have certain models interchange, not just their tailgates, but also other parts, such as their truck bed. This is because they are both under General Motors and also come from the same assembly plants most of the time.

Another problem you will encounter, aside from the dimensions and design of each tailgate, is the technology that different truck manufacturers have installed in them. Automatic and partially opening tailgates have been the trend for the most efficient methods to access a truck bed.

These types of designs might not work if you put them on a different truck as some are electronically powered, and provisions to control these features would be required in the truck to operate it.

Why do people remove their tailgates?

New Ford tailgates have integrated step boards so you can easily climb up your truck bed, if access is one of your concerns. Check the video below to see the integrated tailgate by Ford.

Here's A Quick Recap Of  What We Learned 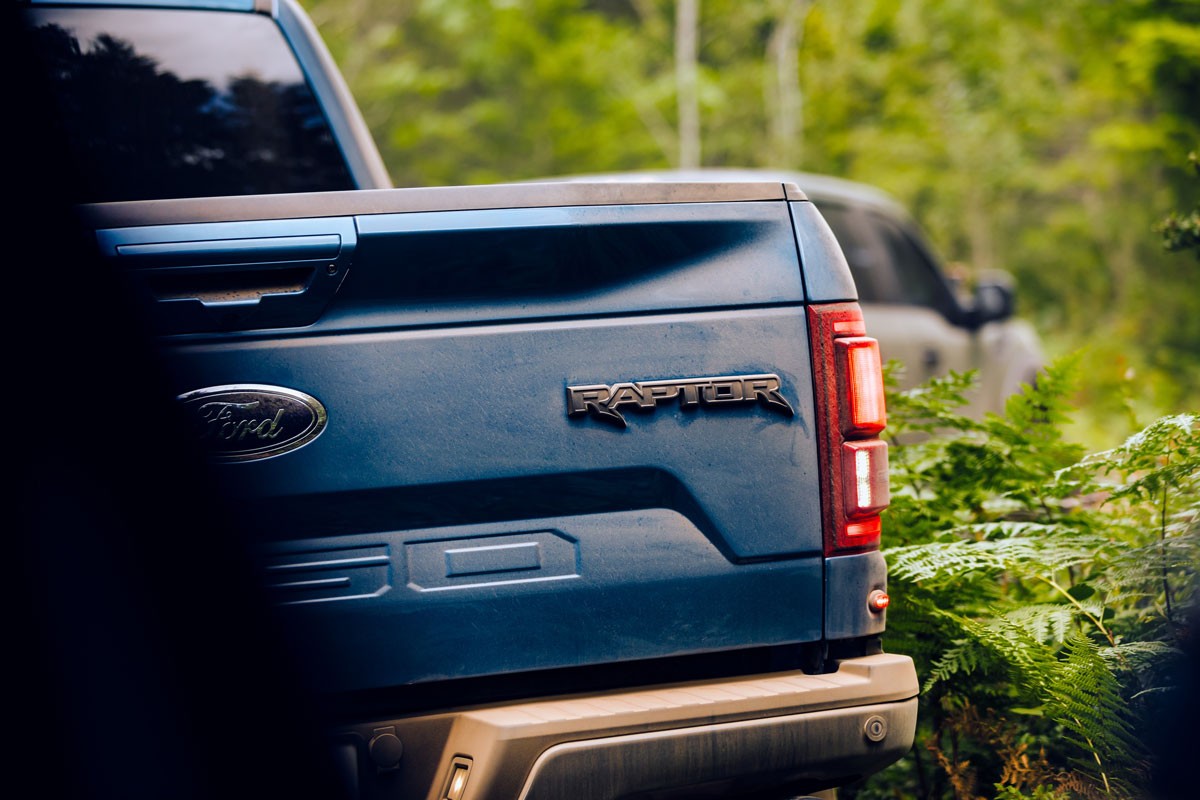 An F150 Raptor tailgate will most likely fit onto a regular F150 truckbed, especially if the trucks are from the same model year. Some notable model years you can interchange with are the '15-'19 F150 trucks. In some cases, you will have to make slight modifications to the tailgate.

We hope that we have satisfied your questions about your Ford tailgate. Do you have any more vehicle-related concerns, particularly about the F-series line-up of Ford? Check out some of our previously written articles below!

F150 Won't Start Just Turns Over Or Cranks – What Could Be Wrong?

Ford F150 Speaker Upgrade – What Options Do You Have?

F150 Won't Start But The Lights Are Flashing – What Could Be Wrong?