Rattling under the car when going over bumps can be a complicated issue to deal with. This is because rattles and clunks are often associated with severe problems. So what could be causing the rattling when you go over bumpy terrain? We have taken the time to answer this question in this article!

There could be several different reasons why there is a rattling under your car when going over bumps. These reasons could be due to the following: 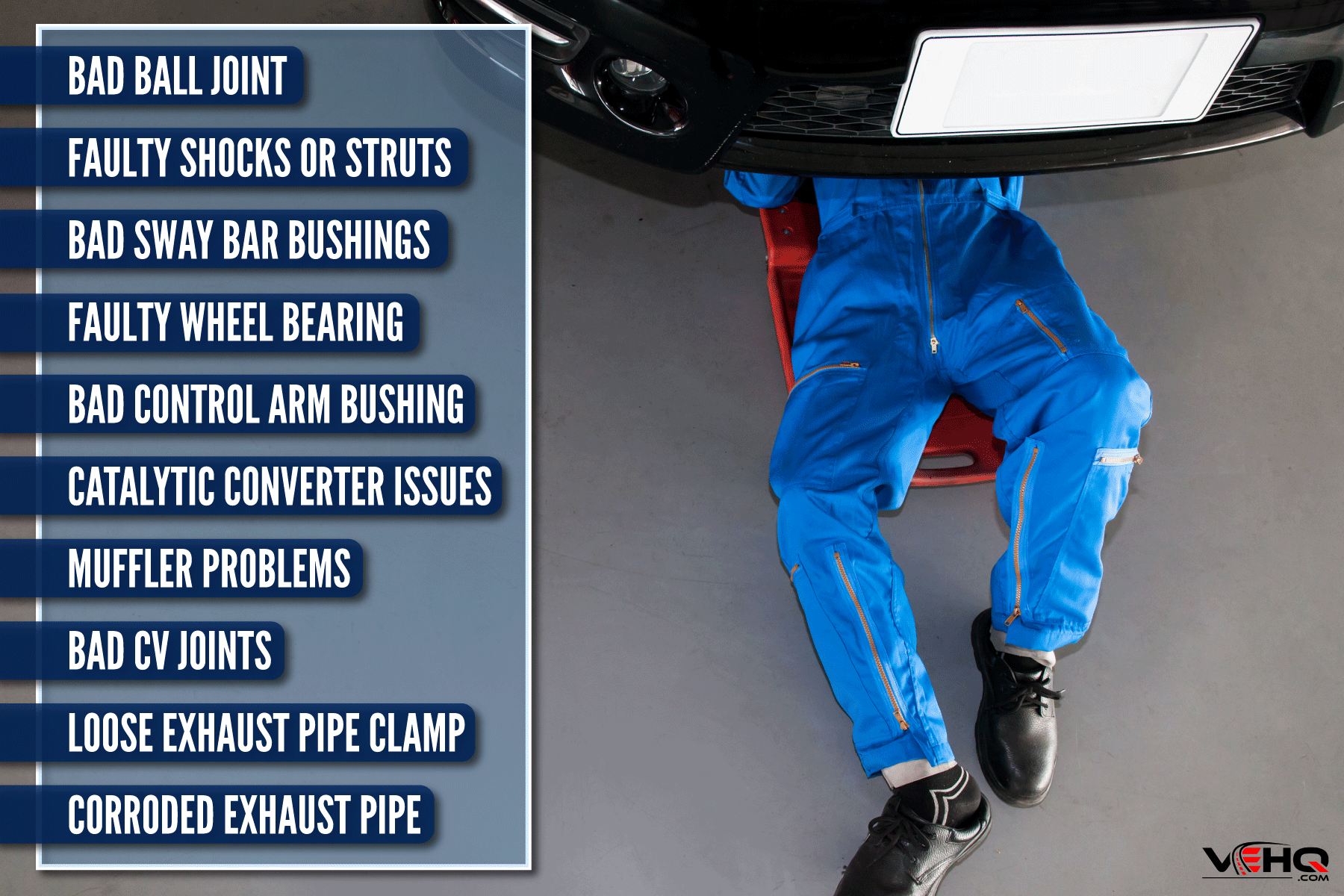 Rattling Under Car When Going Over Bumps—What Could Be Wrong?

Trying to figure out why your car is rattling from underneath. It can be a big guessing game that only a mechanic can figure out. However, there are some issues there are more common than others. Let's take a look at these below:

A bad ball joint can cause further problems to your car. This is because it will affect the handling of your vehicle. For example, if your car has an anti-roll bar, rubbing or rattling sounds may be caused by the ball joints. That's why you should always check them first if you hear noises under your car.

Another issue that could be responsible for rattling sounds under your car when you go over bumps is bad shocks and struts. This is because the shock's primary function is to absorb the impact of the bumps that your tires hit. If it is worn out, there will be noises coming from under your car.

If you are dealing with rattling sounds, you should check the shocks first. In the case the shock absorber is broken or worn out, you should replace it immediately to avoid further damage to your vehicle.

A bad sway bar bushing will affect how your car handles when driving over bumpy roads. This is because it will cause extra noises under the car. Not only that, but you could also feel this noise whenever you go through corners or turns as well.

This issue is another indication of an old sway bar bushing that needs replacement. That's why if you hear rattling sounds under your car when driving over bumps, you should immediately check your car's sway bars and replace the bushing if necessary.

Another possible cause of rattling sounds under your vehicle is a bad wheel bearing. This can affect how the steering works by making it hard for you to turn. In addition, it could also affect the condition of your tires as well.

If you hear rattling sounds coming from your car, take a look at the wheel bearing and see if it is already broken or worn out. If so, have it replaced immediately before further damage occurs to other parts of your vehicle, such as your suspension system. 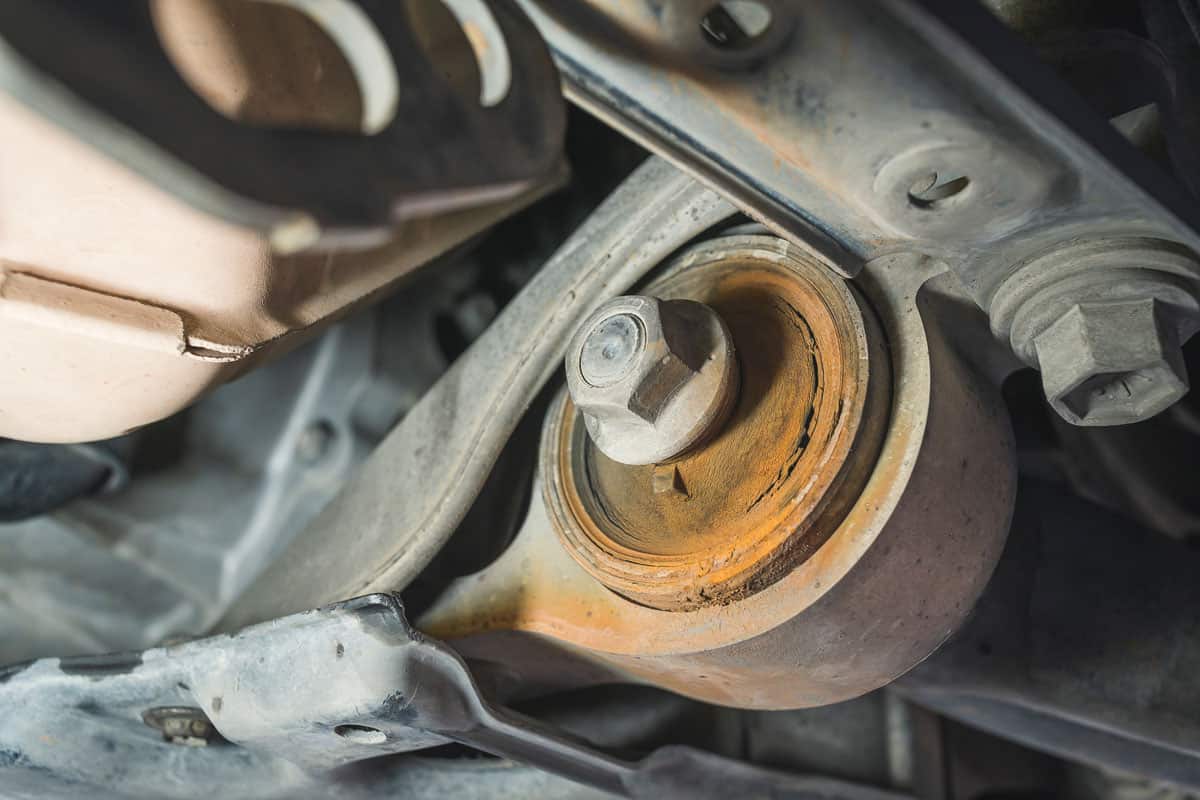 Another possible cause of rattling under your vehicle when going over bumps is bad control arm bushing. This is because the ball joint that holds the lower end of the control arms will cause extra noises as you drive over bumps.

This is because it can come loose, putting extra stress on the upper end of the control arm. Unfortunately, this is also one of the vehicle components responsible for noises coming from under your car.

And when this happens, they will create rattling sounds every time you start your engine and drive over bumps due to the movement from the engine. 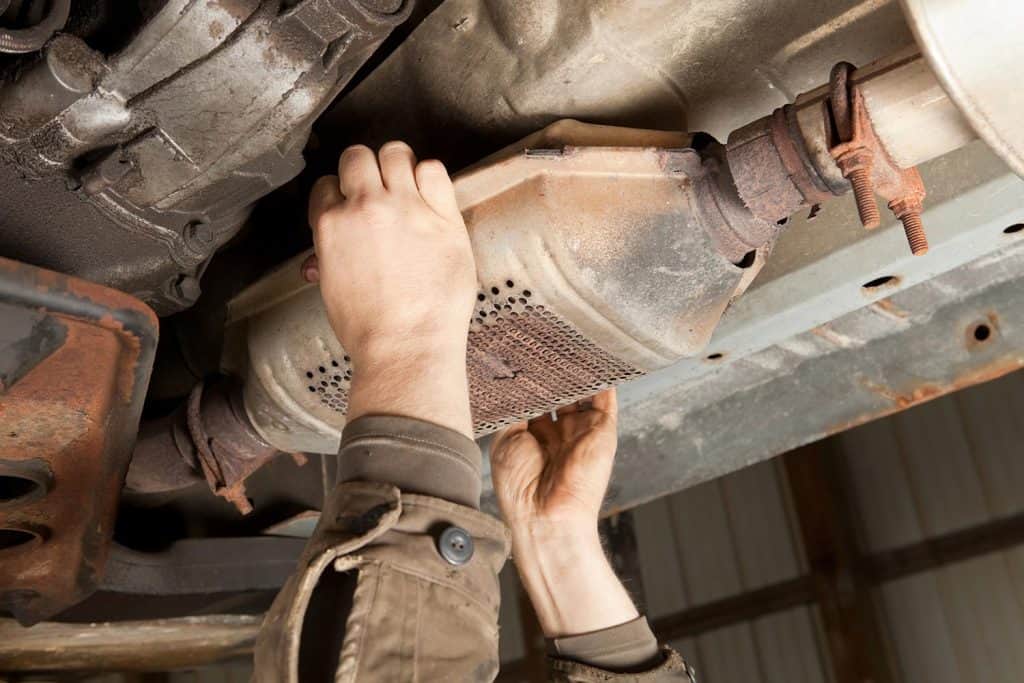 If you have a muffler connected to the back of your vehicle, make sure that it is in good condition because this could be one of the reasons why there are rattling sounds under your car. A broken or worn-out muffler could cause rattling noises when going over bumps due to its loose parts, becoming loose inside the exhaust tube.

Bad CV joints can also be responsible for rattling under your car. This is because they allow the axle to move up and down as you drive over bumps on the road. As such, if your car's joint does not work correctly due to wear or damage, it will cause rattling sounds below your vehicle every time you go over bumps.

Another reason why there are rattling sounds coming from under your car is a loose exhaust pipe clamp. This happens when one of the hose clamps on your car's exhaust system loosens up. And since it is attached to the muffler, every time you drive over bumps, this will make extra noises due to its loose parts hitting each other.

How do I Stop my Car from Rattling? 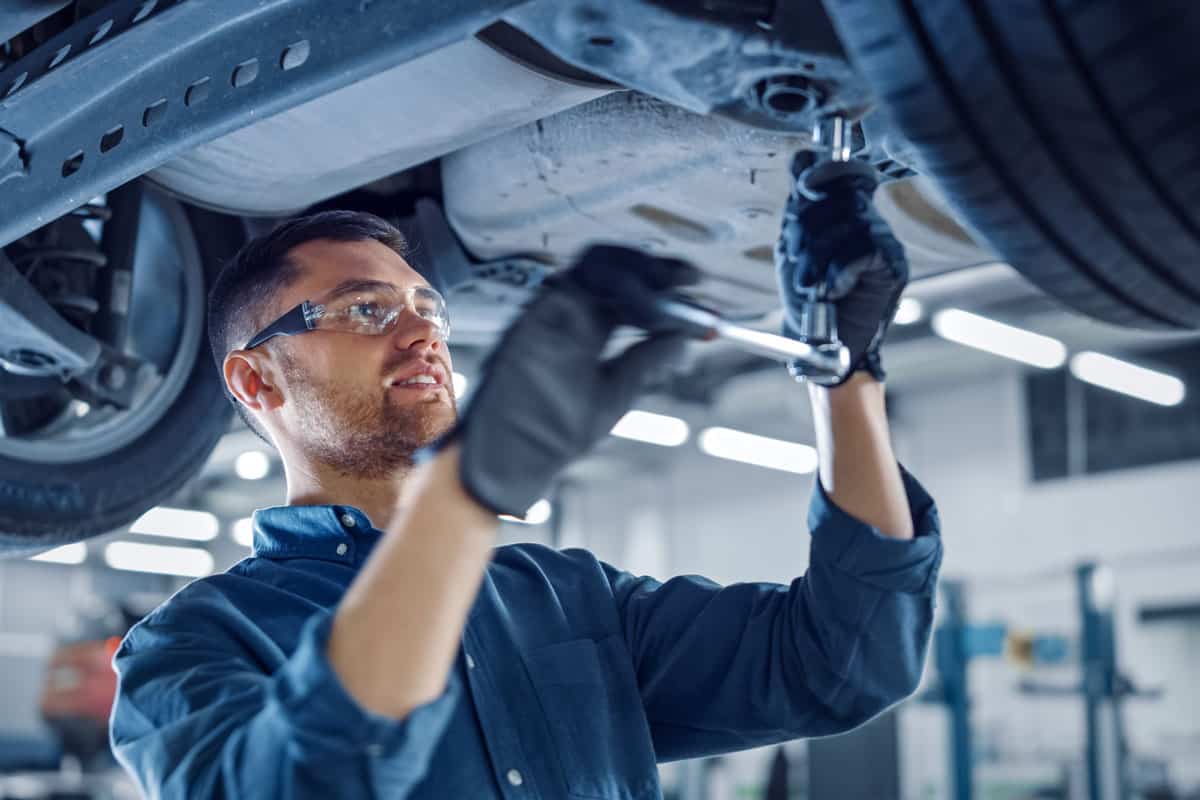 If you are tired of hearing rattling sounds coming from your car, here are some steps to fix this problem.

Start by examining the parts that may have come loose or damaged, making them noisy whenever you drive over bumpy roads. Next, you can check if they are worn out or broken and get replacements.

Then, examine the parts of your car that may have some corrosion. If they are, this can create rattling sounds every time you drive over bumpy roads. As such, remove these from your vehicle and get replacements if needed.

If the muffler is damaged or broken, get a replacement for it immediately to avoid having more rattling noises coming from under your car.

You can also check the joints of your vehicle and see if they are broken. You may need to replace them with new ones, especially if they have been in use for a long time already.

Finally, inspect your car's catalytic converter and exhaust pipe to see if there is any loose part that could be the cause of the rattling sounds under your car. Keep in mind that these are just references and shouldn't replace going to a certified mechanic!

Can Low Oil Cause Rattle?

In most cases, rattling engine noise is caused by loose parts or valves worn out or weakened from corrosion. These usually happen as a result of high mileage or years of use. However, there are also instances where low oil causes the engine's parts to wear down very quickly and make extra noises under your car.

Therefore, one should watch out for early signs of oil leakage or using very low grade of oil, which can cause your engine to wear out fast.

How Do you tell if the Struts on your Car are Bad?

The height of your car's front end is a good indicator of problems with its struts or shock absorbers. If you hear rattling sounds when going over bumps, this may be the reason why.

To see if your car's front end is sagging too low, you can also lift its rear part and let it go. However, in doing so, one should watch closely to ensure that the front end doesn't come down too hard on the pavement. If it does, then you may have to replace the struts as soon as possible. 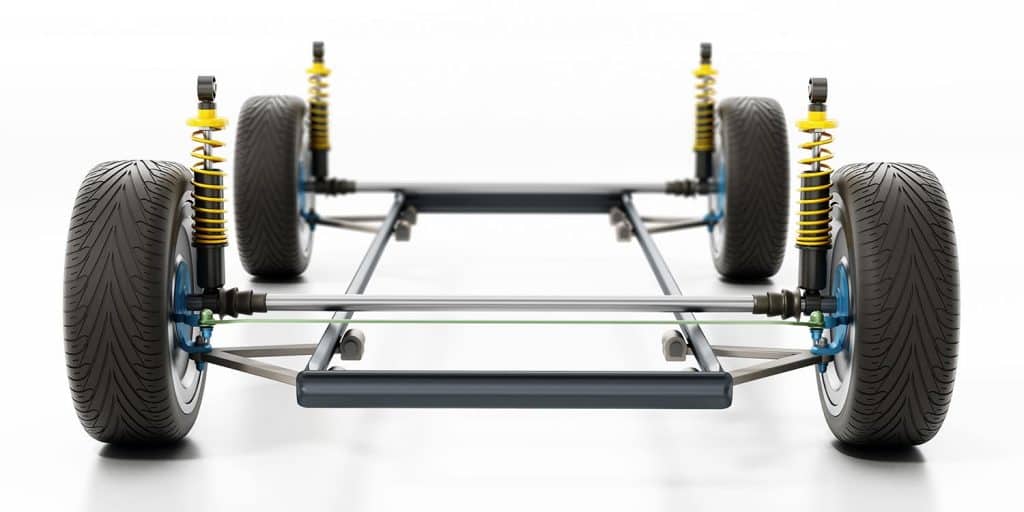 Are Struts Worth Replacing?

One important thing to remember is that your struts are not something you must replace immediately. There are some cases wherein you can use them for up to 80,000 miles before getting new ones. However, if you feel loose or are already showing damage due to corrosion, it would be best to get a replacement.

How Much Does it Cost to Replace Struts?

The average cost of replacing a pair of struts can vary depending on the vehicle and who repairs it. However, you can expect to pay anywhere from $450 to $900. Therefore, you should replace both struts even if just one is bad.

What's the Difference Between Shocks and Struts? 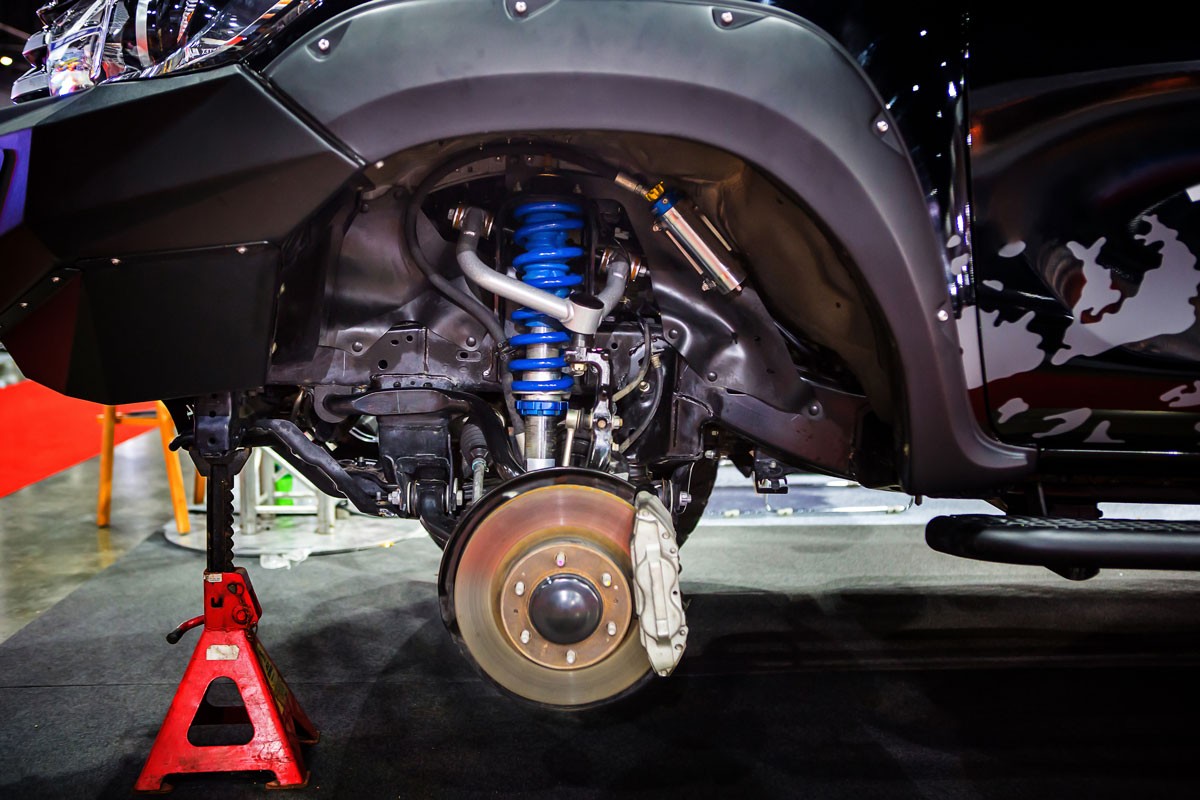 While your car's shocks and struts perform the same function, there is a subtle difference between them. The reason for this is that they are different in structure and how they work.

The essential difference between shocks and struts is that while shocks absorb and release energy by deforming, struts carry the vehicle's weight, so it remains stationary. However, because both share a similar purpose of stabilizing your car's suspension system, you should replace them simultaneously. 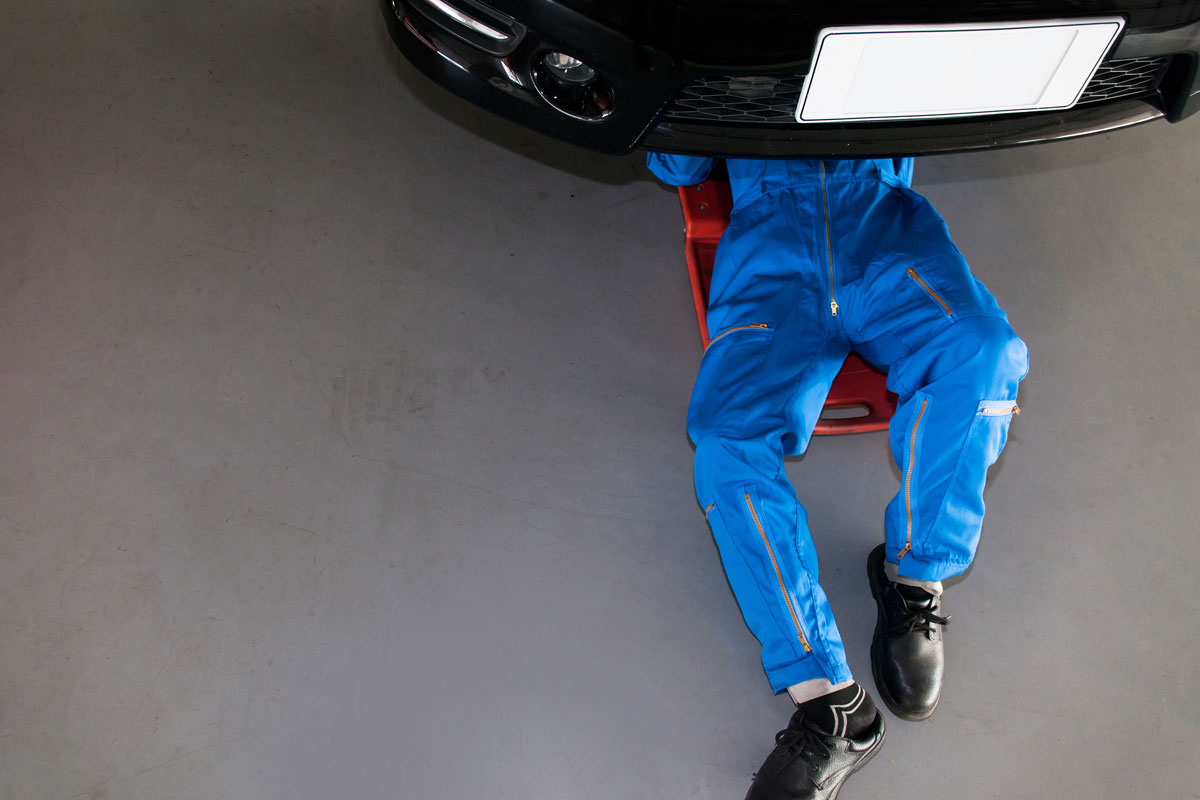 Overall, at some point, every vehicle is going to need a repair of some kind. For example, a rattling under your car when it hits a bump is common because no road is without some rough terrain. In addition, it is important to have the undercarriage of your car checked during routine oil services to be sure everything is inadequate performance condition.

Other common car questions to consider:

Smoke Coming From Exhaust—Here’s What Could Be Wrong

Tire Has A Bubble — What To Do?

Engine Stopped While Driving – Here’s What Could Be Wrong 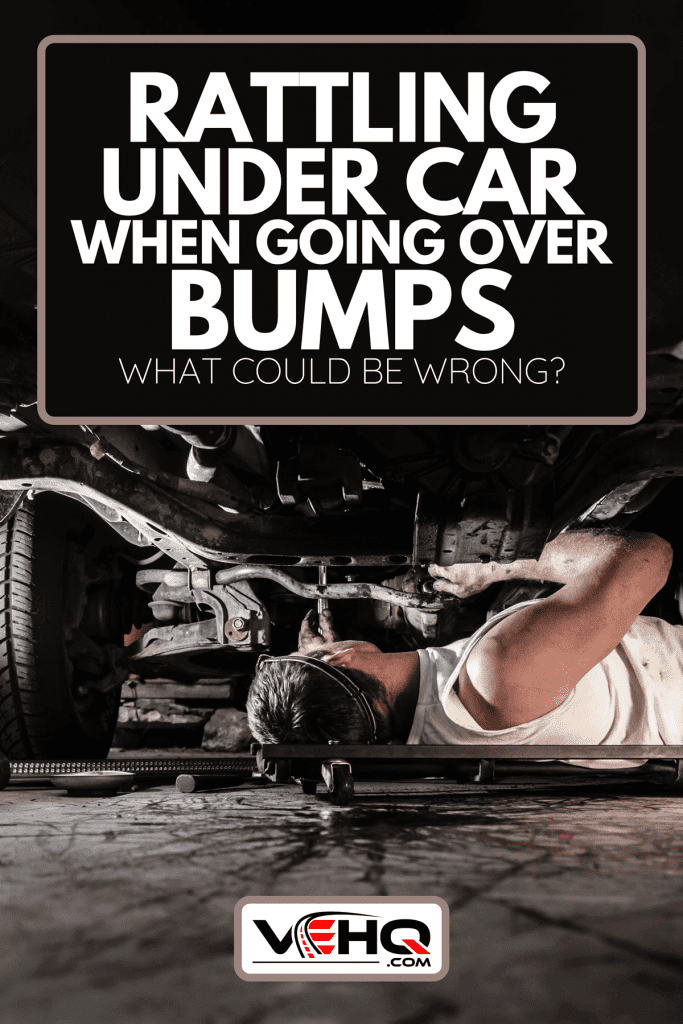