Rust is something that can reduce the structural integrity of a truck. And depending on the age of a truck and the climate it's been driven in, rust on the undercarriage can be common. But how much rust under a truck is something to be concerned about? We did the research to bring you the answer.

As a truck ages, the steel body panels and chassis components will slowly start to oxidize and form rust. The degree to which a truck will rust is determined by many factors such as where it is driven, how it is used, and how well it is maintained. The truck will be structurally compromised if the rust starts to have scales, holes, frame dents, or breaks.

Sometimes rust is an inevitable part of a truck's life, but there are ways to prevent it from developing. In this article, we will discuss both of these aspects. In addition, we will answer other frequently asked questions about rust on vehicles, so keep reading! 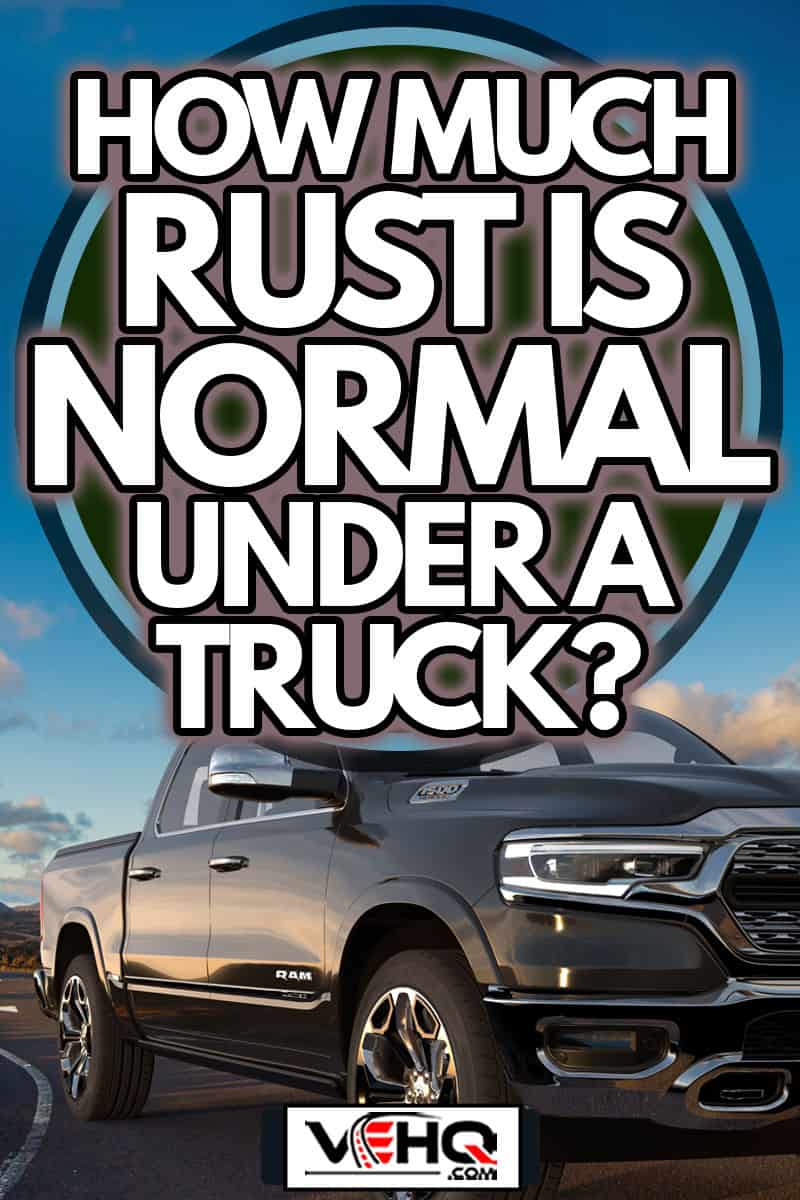 Should I Be Concerned About Rust Under My Truck?

When rust starts to form on a truck, it can be detrimental to its integrity and performance.

When rust forms on a truck, it can cause the frame to weaken and eventually break. This can lead to serious problems such as the truck collapsing while driving.

In addition, rust can cause parts of the truck to break off and fall away. This can be especially dangerous if it happens while the truck is in motion.

You can tell when rust is something to be concerned about when the truck's undercarriage starts to scale and flake away.

If the rust is left unchecked, it will continue to spread and cause more damage to the truck. At this point, you should take your truck to a mechanic or body shop to have the rust repaired.

However, if less than 25% of the thickness of the frame is affected by rust, it can be repaired with a welding process called "stitch welding."

This is where the rust is removed and new metal is welded in its place. This will stop the spread of rust and reinforce the frame.

If more than 25% of the thickness of the frame is affected by rust, then the frame will need to be replaced.

Read more: Why Do Cars Rust? (And How To Fix That) 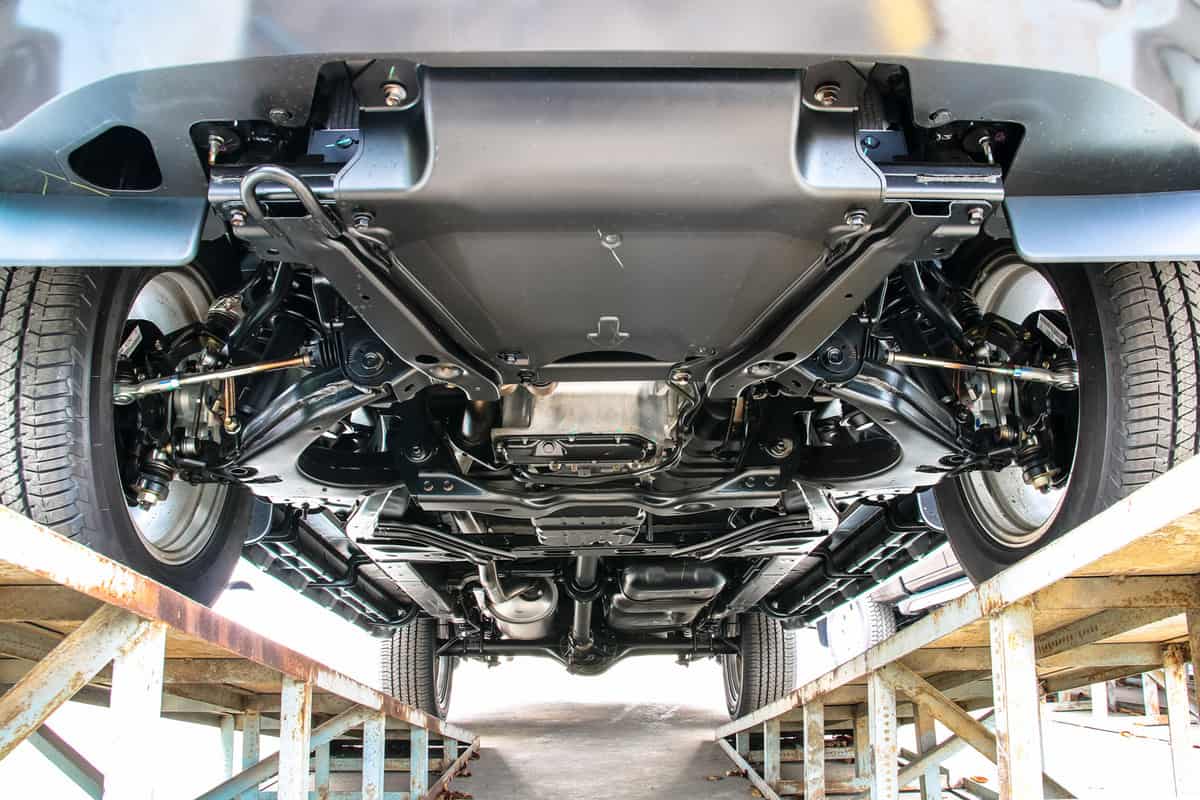 How Can I Prevent Rust On My Truck?

If you own a truck or any other vehicle, there are ways you can prevent rust. Let's take a look at them below:

One of the best ways to prevent rust is to regularly wash and wax your truck. This will create a barrier to protect the paint and metal from the elements.

You should wash your truck at least once a month and even more often if you live in an area with a lot of snow or salt. When washing your truck, be sure to use a mild soap and avoid harsh chemicals.

It may seem pointless, but washing your vehicle in the winter will prevent road salt from creating rust.

After washing, dry your truck completely and apply a coat of wax. This will provide an extra layer of protection against the elements.

You can also buy products that are specifically designed to protect against rust. These products usually come in the form of sprays or liquids that you apply to the truck's surface.

Be sure to follow the instructions on the product label, and reapply as needed.

Another way to prevent rust is to address any paint flaking or chips. When the paint on your truck starts to flake, it exposes the metal beneath it to the elements.

This can cause the metal to rust, so it's important to address the issue as soon as possible. Then, you can sand down the flaking paint and apply a new coat of paint or primer.

If you have any chips in the paint, be sure to fill them in with putty or another type of filler. This will prevent water and other elements from getting to the metal beneath.

Read more: How To Patch A Rust Hole In A Truck Bed

Store Inside When Possible

When you're not using your truck, it's best to store it inside. This will protect it from the elements and prevent rust from forming.

If you don't have a garage or other storage space, you can buy a cover for your truck. This will keep it protected from the weather when it's not in use.

Another way to prevent rust is to apply an undercoating to the underside of your truck. This will create a barrier between the metal and the elements.

Undercoating can be applied with a brush, roller, or sprayer. Be sure to follow the instructions on the product label, and reapply as needed. In addition, there are many mechanic shops and dealerships that offer undercoating services.

If you are interested in buying a new truck in an area with salt on the roads, see if you can work undercoating into the purchase price. In the long run, it will save you money by preventing rust.

Read more: How To Protect The Underside Of A Car From Rust

Anti-rust spray can be used on the exposed areas of your truck to prevent rust from forming. This includes the underside, wheel wells, and any other areas prone to rusting.

If you are unsure what brand to use, ask the staff at your local auto parts store for a recommendation.

If you're buying a used truck, be sure to check the CarFax report. This will tell you if the truck has been in any accidents or had any other damage.

Damage can sometimes cause rust, so it's important to be aware of it before making a purchase. In addition, it will tell you if the truck spent a lot of time in a region with salty roads.

Take these steps to prevent rust on your truck, and it will last for many years to come. 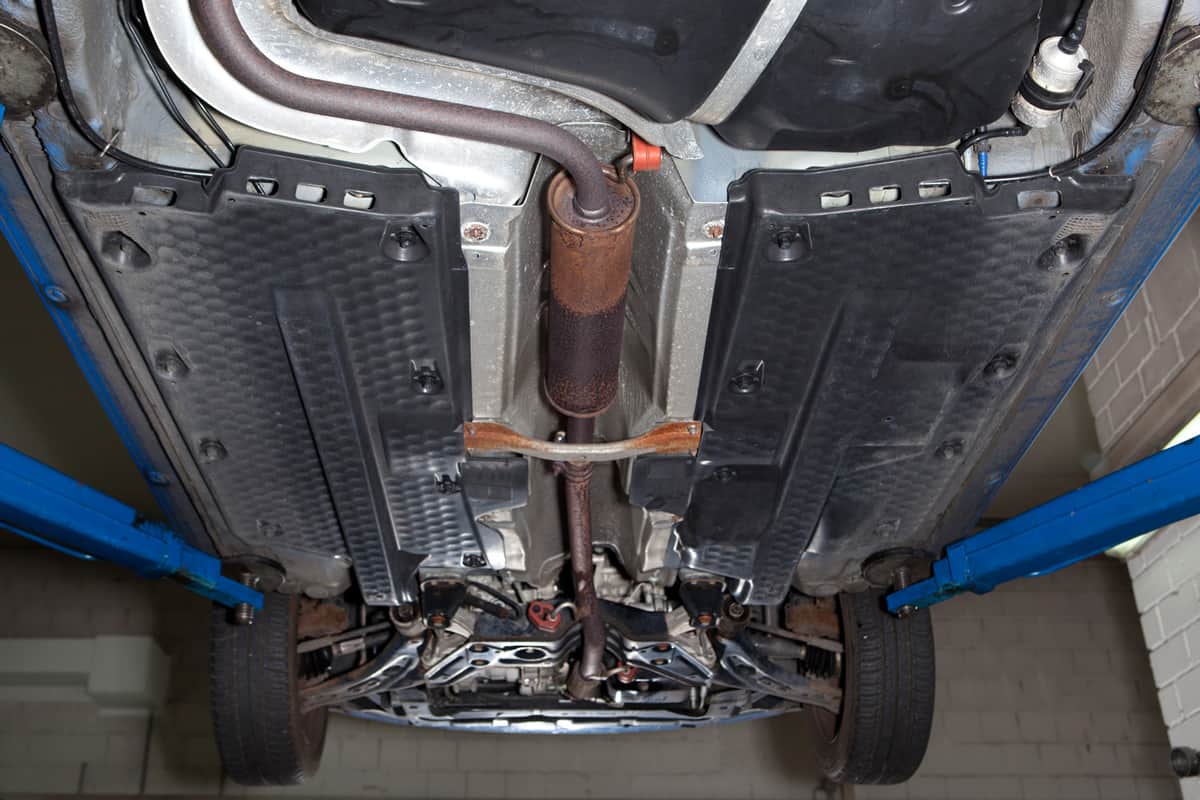 Should I Buy A Truck With Some Rust Underneath?

If the rust is just on the surface, then you can probably sand it down and repaint it. However, if the rust has progressed to the point where it's affecting the thickness of the metal, then you will need to replace the affected parts.

Keep in mind that rust can spread quickly, so it's important to address it as soon as possible. If you're buying a used truck, be sure to check the CarFax report to see if there is any damage that could have caused the rust.

In general, it's best to avoid trucks with rust unless you're prepared to do the necessary repairs. With the online resources to buy vehicles, don't feel stuck in one region.

You can find the truck of your dreams from anywhere in the country, so don't let rust discourage you. Instead, do your research and find a truck that's perfect for you.

Can You Put Undercoating Over Rust? 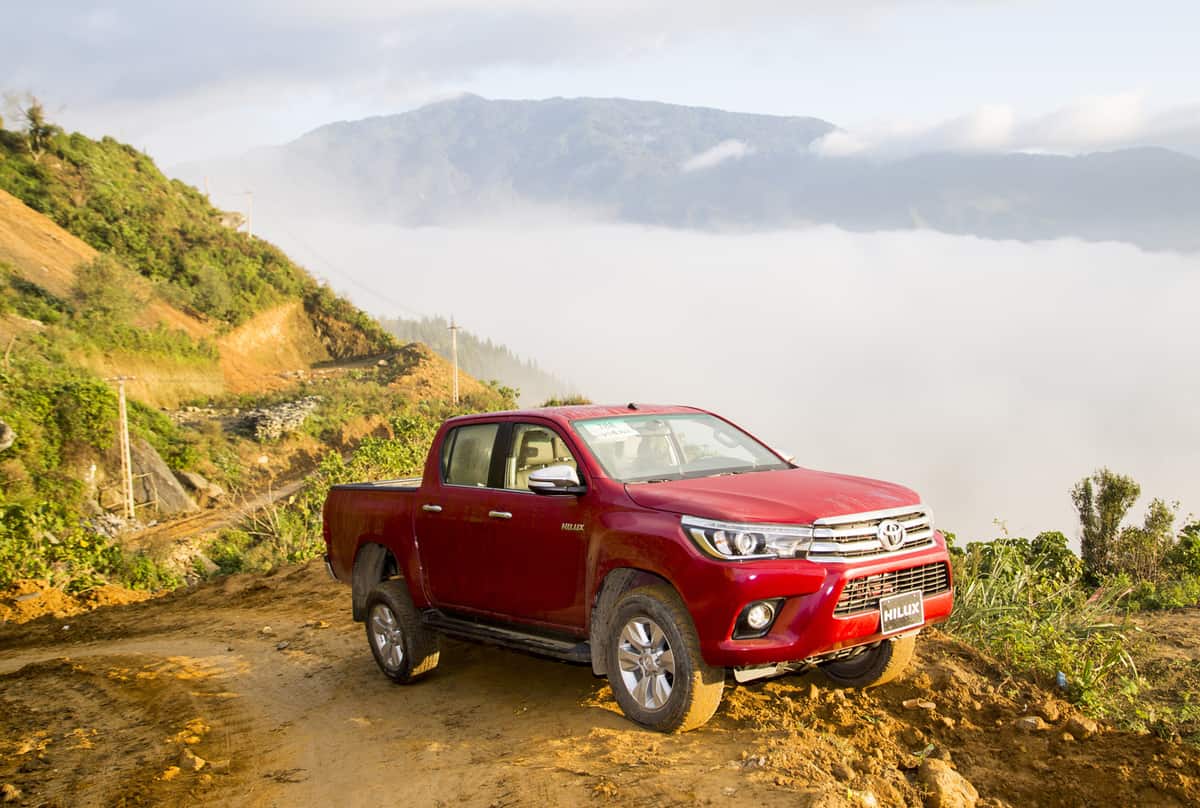 You can put undercoating over rust, but it will not slow down the rusting process. Instead, the undercoating will trap the moisture which will cause the rust to spread.

In other words, the undercoating will make the undercarriage look nice, but the rust will still exist underneath. Undercoating only works against rust if it is applied before the rust forms.

That's why, if you are looking for a used truck that has undercoating, it is vital to find out where it came from. It is possible that rust was on the truck and the seller just had the undercarriage sprayed to cover it up.

WD-40 is a multi-purpose lubricant that can be used for a variety of tasks, but does it prevent rust?

The short answer is yes, WD-40 can help prevent rust. It works by displacing moisture and creating a barrier that protects against corrosion.

However, it's important to note that WD-40 is not a long-term solution. It should be used as a preventative measure, not a cure for rust.

If you already have rust on your truck, WD-40 will not remove it. Instead, you'll need to use a rust removal product, or you'll need to take the truck to a mechanic for repairs.

When using WD-40, be sure to follow the instructions on the label. Then, apply it to a clean surface, and reapply as needed. 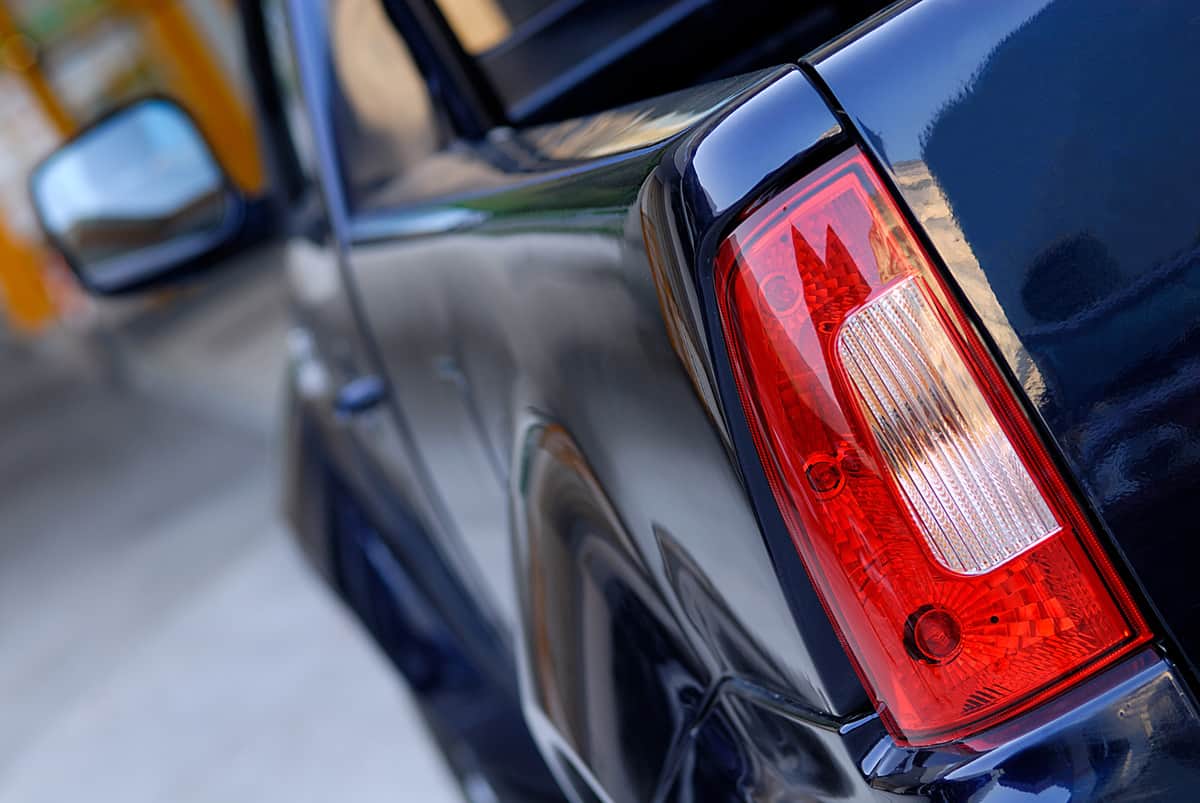 Rust is a big problem for truck owners because it can spread quickly and cause extensive damage. If left unchecked, rust will eventually eat through the metal and cause structural problems.

That's why it's so important to take steps to prevent rust on your truck. By storing your truck inside, applying undercoating before rust forms, and keeping the underside of the truck clean, you can slow down the rusting process and extend the life of your truck.