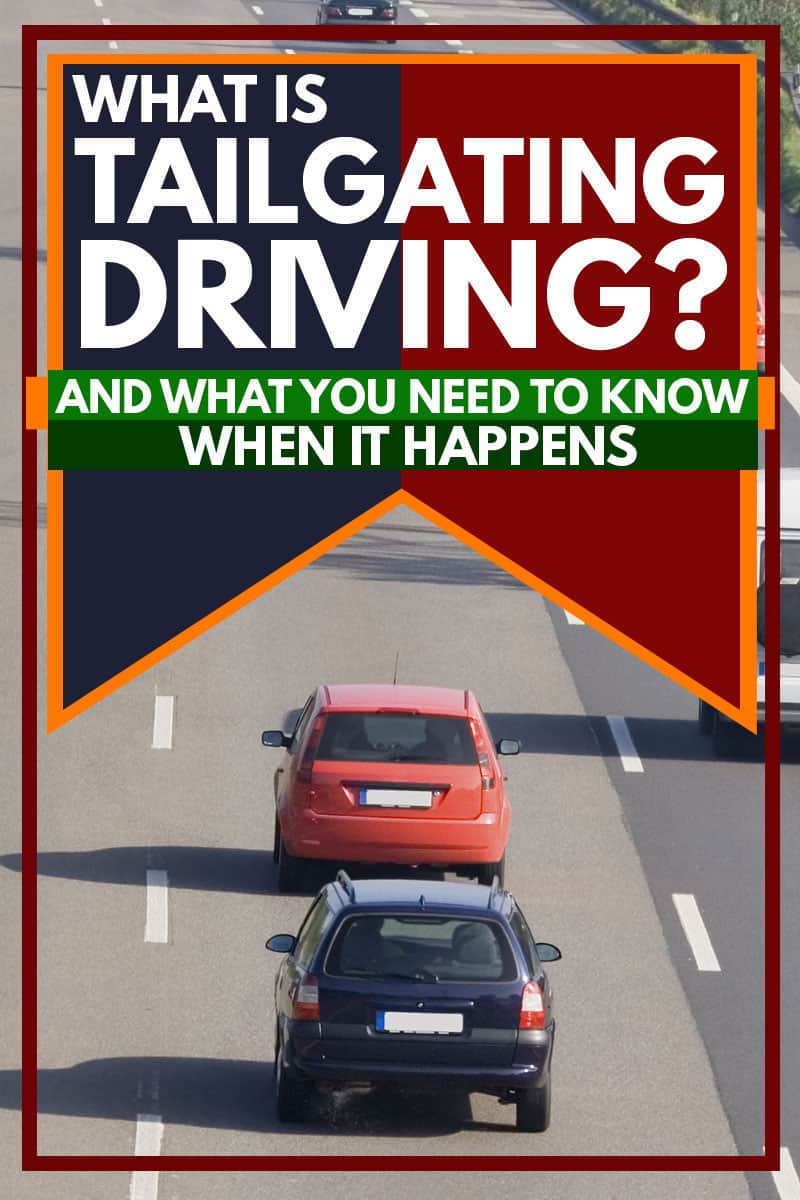 A common question that comes up for drivers is, what does tailgating mean? It's a phrase everyone should have a handle on before going behind the wheel. We did some research on the topic and found a concise answer.

What is tailgating? Tailgating refers to a driver driving too close to the car in front of them. In this situation, the space between these two vehicles wouldn't guarantee that the front car can brake and avoid a collision.

This brief definition doesn't cover everything about this important topic. But our following sections will ensure you have a complete grasp of tailgating. We'll make sure you know what to do and understand why people engage in this dangerous act.

Why Do People Tailgate When Driving?

In most cases, a person will tailgate another driver to make them drive faster. These drivers rely on them being a nuisance to ensure the other driver increases their speed. But what these people fail to realize it's not the other driver's responsibility to follow their desired speed limit.

A driver's primary responsibility is instead following the posted speed limit rather than what the person driving behind them wants. You might also encounter a driver who takes their own speed limit a little too seriously.

In these more severe cases, a driver might tailgate you because of their road rage. These situations can be downright scary and dangerous. It's best to avoid them and resist making their anger any worse.

Both these reasons will end up with tailgaters attempting maneuvers such as blocking. Blocking is when a driver will get closer to a car in front of them to ensure other drivers can't enter traffic. It's something you'll encounter a lot when an issue like a traffic jam arises.

What to Do if a Car is Tailgating You?

Dealing with a tailgater is something every driver will have to deal with during their driving career. Luckily, we have four tips to ensure these reckless drivers never end up making your life worse.

As we mentioned earlier, dealing with tailgaters can be scary. But you must remain calm and avoid letting their anger affect your driving. Calming yourself should be the first thing anyone does when encountering a tailgater.

This task can be rather tricky because these drivers tend to rely on annoying habits to get their way. These habits include yelling, honking their horns, flipping you the middle finger, or flashing their lights.

Each of these methods could make even the calmest person feel a bit of rage. But this reaction isn't productive and will probably aggravate the situation to a more dangerous level.

Most likely, letting these annoying habits effect you will end up leading to an awful accident. It's best to cope with them and not let these reckless drivers cruelly damage your life.

The most effective way to deal with tailgaters is avoiding them in the first place. A simple way to accomplish this task is by staying alert. You must keep track of the other drivers around you and their behavior.

If you see a driver tailgating another car in the next lane, look for a way to avoid them. This action would require spotting a clearing in traffic and putting as much distance between you and them as possible.

You should remember that slower traffic should keep to the right as well. This bit of information should help you steer clear of most tailgates. These aggressive drivers rarely ever adventure into the right lane unless forced by construction or other factors.

Remove Yourself From the Situation

Sometimes, keeping your distance won't be a simple matter of changing into another lane. Tailgaters aren't only a highway or multi-lane road issue. You'll encounter them on a two-lane street as well.

This situation requires more drastic measures as most two-lane roads don't allow for passing. In this case, you should look for somewhere to safely pull off the road. You can then wait for the tailgater to pass and takes the danger with them.

But you must try to avoid using the emergency lane or pulling onto the shoulder. Both these actions could cause a dangerous hazard for other drivers around you. It's best to look for something like a parking lot or taking the next available turn.

If you're on a road that changes between one and two lanes, pull into the right lane. This action should be done when the road splits. It'll ensure the tailgate can easily pass on the left side.

Stay Consistent With Your Speed

It's not a wise move to keep your tailgater guessing with your speed level. You must fight the urge to speed up, or it could cause a dangerous situation. Maintaining a consistent speed on any type of road creates a safer environment for the faster driver to pass.

We'd recommend this speed ends up well-under the speed limit. This lower level of speed will provide your tailgater with more incentive to pass. As a result, your problem will disappear sooner rather than later.

Is it Illegal to Tailgate?

In almost all US states, tailgating is considered illegal. The penalties for this action can vary based on states' policies and laws. Most of the time, tailgaters can expect to receive a traffic ticket or even face criminal charges when caught.

But the interpretation of tailgating is often subjective and hard for officers to enforce. Most states' laws don't include an agreed-upon safe distance between two vehicles. For instance, Michigan's laws state, "operator of a motor vehicle shall not follow another vehicle more closely than is reasonable and prudent."

It becomes an interpretation rather than an agreed-upon definition of what is tailgating. This issue causes these laws to be less and less enforced. Due to this, tailgaters rarely receive punishment for their reckless driving.

Can You Call the Police for Tailgating?

The simple answer to this question is yes. You can absolutely call the police and report another driver for driving recklessly. This task is something you can actually do right from your car.

Of course, you shouldn't make the call when driving. This could end up putting your life in danger and making the situation much worse. You should instead ask a passenger to report it.

But if there isn't a passenger with you, find the nearest area to pull over. A parking lot or safe shoulder would be a perfect place to make the necessary phone call. Either way, it must be a place that you feel is safe to stop your vehicle for a few minutes.

This call shouldn't be to 911 unless lives are in danger. This number is meant for emergencies only and shouldn't be used for reporting moderate tailgating. For instance, a car swearing between at 100 miles per hour would warrant a call to 911.

If this situation doesn't sound like what you encountered, call the police's non-emergency number. The call itself should consist of you providing as much information as possible about the car. Be precise and clear to ensure this dangerous driver gets off the road quickly.

Some states will also have call lines designed for reckless driving issues. In Texas, you can call 311 to issue a report about tailgating or drunk driving. This number will differ from call line to call line but should be easy to find using a Google search.

Is it Illegal to Brake Check a Tailgater?

Some drivers don't stay calm when encountering a tailgater. This situation often results in them engaging in what's called brake checking. Brake checking is when a person being tailgated slams suddenly on their brakes to surprise the person riding their bumper.

This action isn't a legal one by any stretch of the imagination. It's a maneuver that puts people in danger and can cause serious accidents. In some scenarios, drivers will intentionally cause a collision by brake checking as an attempt to earn a large sum of money.

Are You at Fault if Someone Brake Checks You?

Most people adhere to the myth that rear-end collisions are always the rear driver's fault. This couldn't be further from the truth. It's highly possible the front driver did something, such as brake checking, to cause the accident.

Brake checking is an illegal act and considered a type of road rage. Someone who engages in this action should be held accountable for what their driving caused. As a result, these drivers should be at fault for any accident created by their actions. But proving the front driver's at fault for brake checking is tricky.

Proving a person's at fault for an accident will often come down to witness statements. Otherwise, it becomes one driver's word against another. This situation doesn't usually end up well for the rear driver in a brake checking scenario.

This issue means anyone who feels they were the victim of a brake checking should search for a witness. If someone from the accident scene agrees with you, it can go along in proving the other driver is at fault.

You should also do your best to obtain any video evidence that would support your claim. This evidence would need to show the other driver stopped for no reason and causes the accident on purpose.

Videos often end up being great evidence as they sometimes catch the other driver admitting they're at fault. Brake checkers have a habit of needing to celebrate about tricking you into the accident. Video evidence capturing this exchange would be useful and ensure you don't get stuck holding the bag.

How Dangerous is Tailgating?

Tailgating's often seen as not a big deal, but it's one of the worst habits someone can have on the road. A person who engages in this behavior doesn't give themselves enough time to react toward other drivers' maneuvers.

This issue is why tailgating happens to be the leading cause of rear-end collisions. Tailgaters just aren't ready to deal with the constant changes that occur on the road. These changes include sudden stops, swerves, unexpected weather conditions, falling debris, and much more.

Any of these unforeseen issues can become a tailgater's worse nightmare. This nightmare will likely involve an ugly accident, which nobody wants to experience. But a regular driver would have enough time to hit the brakes and adjust.

Overall, tailgating isn't worth the perceived benefits. It's better to arrive a little later than being involved in an accident because you couldn't resist riding someone's bumper.

After reading our article, you should be an expert on all things tailgating driving. You should know everything needed to ensure these aggressive drivers don't wreck your driving experience. But if you do happen to have any more questions or concerns, post them in our comment section. We'll make sure to answer them as quickly as possible.