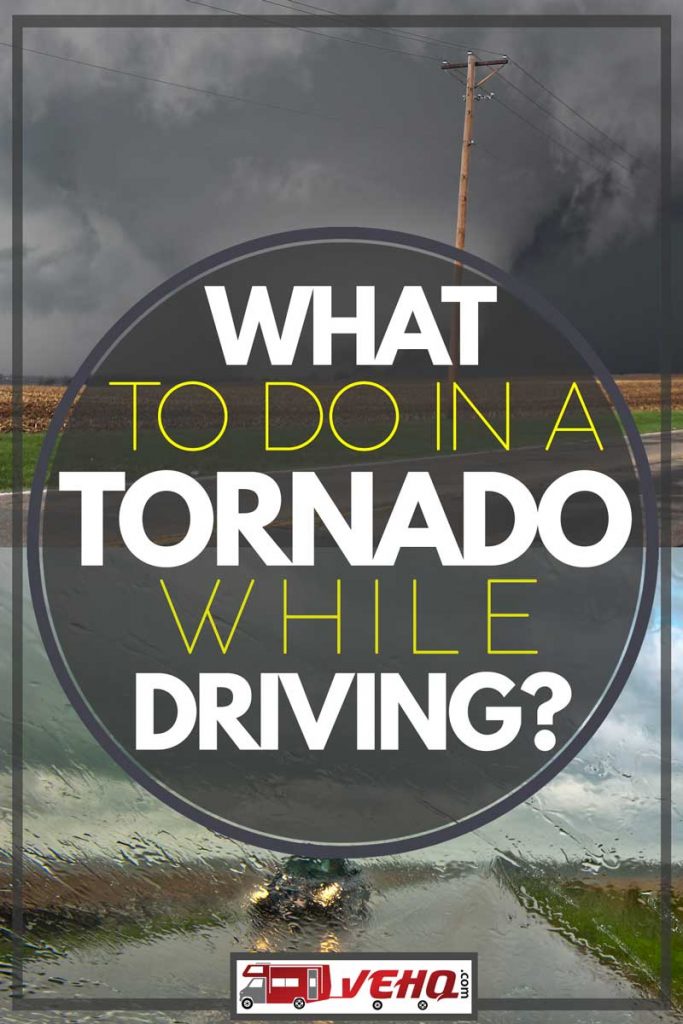 Driving around with a tornado in your view is definitely one of the scariest situations to encounter. You've heard various suggestions on what to do at the moment and you may not be sure which is the safest. We were wondering the same, so we looked it up and put all of the advice together into one easy-to-follow guide.

If you find yourself with a nearby tornado while driving along the road, your safest bet is to drive to the nearest sturdy shelter and reside in its basement. Gas stations and restaurants are good examples of places you can drive to.

It's best to be mentally prepared just in case this ever happens. Although we hope this doesn't happen to you, continue reading to become better prepared for these encounters.

Can You outrun a Tornado In a Car? 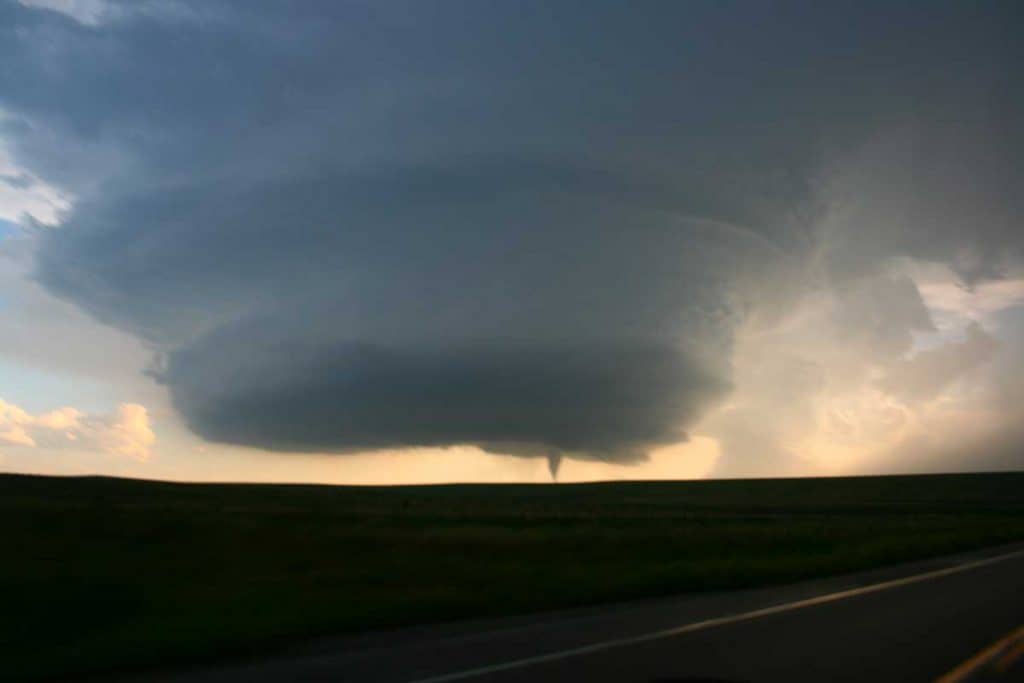 The wind speeds of a tornado can reach around 200 MPH, although most usually only travel at 35 MPH; some at higher speeds of roughly 70 MPH. They also stretch up to two and a half miles wide. Most don't last more than ten minutes, but on rare occasions, they can extend over an hour.

You'd think you could easily outrun it because almost any car can top 70 MPH, but there's a lot of other factors. For example, if you're in a populated area, there's much more maneuvering you would have to do, even at 70+ MPH. There are also other factors due to weather such as damaging hail or flooding.

However, if you're on an open road, you could possibly outrun the tornado, assuming you're far enough away. It just requires you to know the surroundings. First, determine your position in relation to the tornado. Then, figure out which direction it's heading. Once determined, drive perpendicular to the path of the tornado; if it's traveling east, you travel south.

If you're in a position where out-driving it isn't an option, the next best thing is to abandon your car and lay low in a ditch. We'll explain why that is so later in the article.

When leaving your car isn't possible, there's only one thing left to try protecting yourself: keep your seatbelt on tightly, lay below the windshield to avoid shattered glass, and cover yourself with a blanket.

Should You Seek Shelter Under An Overpass Or A Bridge?

One of the most common tornado myths people believe is that it's safest to take cover under a bridge. A bridge is actually the worst place to hide. The Severe Weather Awareness Committee in Ohio says you're much more likely to get killed doing that. The reason people believe the myth is because some people were lucky and survived under a bridge. But the actual chances of surviving are quite improbable.

Remember that tornadoes can hit wind speeds of more than 200 MPH. At that speed, the debris of numerous sizes basically become missiles that can easily cause severe injury no matter where on the bridge. The bridge itself could become deadly debris; usually, there's no support beam holding it up, so there's the risk of collapsing. If you're in the direct path of the tornado, the strong winds are an even stronger enemy; the wind gushes one direction from behind the bridge and does a nearly complete 180-degree change as it passes over. You'll be pulled one way and rapidly pulled the exact opposite way in a matter of seconds.

Additionally, you have to consider other drivers. As this is one of the most believed myths for protection, everyone who isn't aware of how bad an idea this is will attempt to try it. That can lead to traffic jams, and people becoming more susceptible by exposing themselves running under the bridge. Plus, with so much damaging debris or hail, that could cause multiple accidents due to hindered visibility.

Why Do You Get In A Ditch During A Tornado? 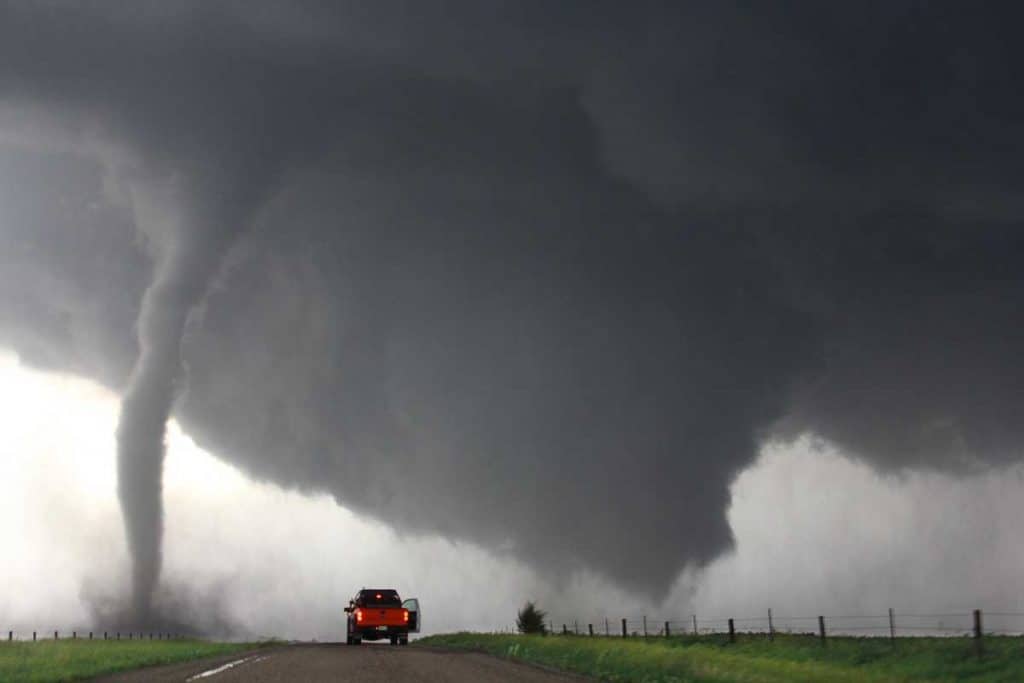 As we mentioned earlier, taking cover in a ditch is the next best available option when out-running a tornado is unlikely. Abandon the car (because the strong winds definitely will use it against you), grab some kind of protection, and lay down flat in the lowest ground you can find. Keep in mind that there is potential for flash flooding if there's heavy rain involved.

The reason people suggest doing this is that the lower to the ground, the less likely the tornado will pick you up with its winds. Its wind speeds at the base of the tornado are significantly slower at ground level. Additionally, the tornado won't dip into a ditch as it moves if it were to travel over you.

Before abandoning your car, take some form of protection like a blanket or jacket. Using whatever cover available offers some light additional protection from the flying debris.

Can You Survive Inside A Tornado?

The thing to note about tornadoes is that the wind isn't the threat to you, it's the debris in or caused by the wind. Below are scenarios in which we'll explain if it's possible to survive a tornado.

In a house or building

To survive inside a tornado while in these structures, you must go to the lowest point possible. The safest is a basement or storm shelter. Have something to protect your head and body. Be sure to avoid being near any windows as the debris will come flying through. Assuming you're in a house, try not to be underneath the part of the house where there are multiple appliances above. Live Science shares that one myth is that the safest part of the basement is the southwest corner; as long as you're away from windows, it doesn't matter which part of the basement that you are in.

In a mobile home

If you're in a mobile home during a tornado, staying inside of it will not help you survive. Treat it as if it were a car, exit it and find the lowest ground possible. Even if the mobile home is tied down, it can't be tied down tight enough to resist the powerful winds.

As previously mentioned, rapidly flying debris is the main threat. Therefore, when outside, avoid being near trees or big rocks.

Can You Survive If You've Been Picked Up By A Tornado? 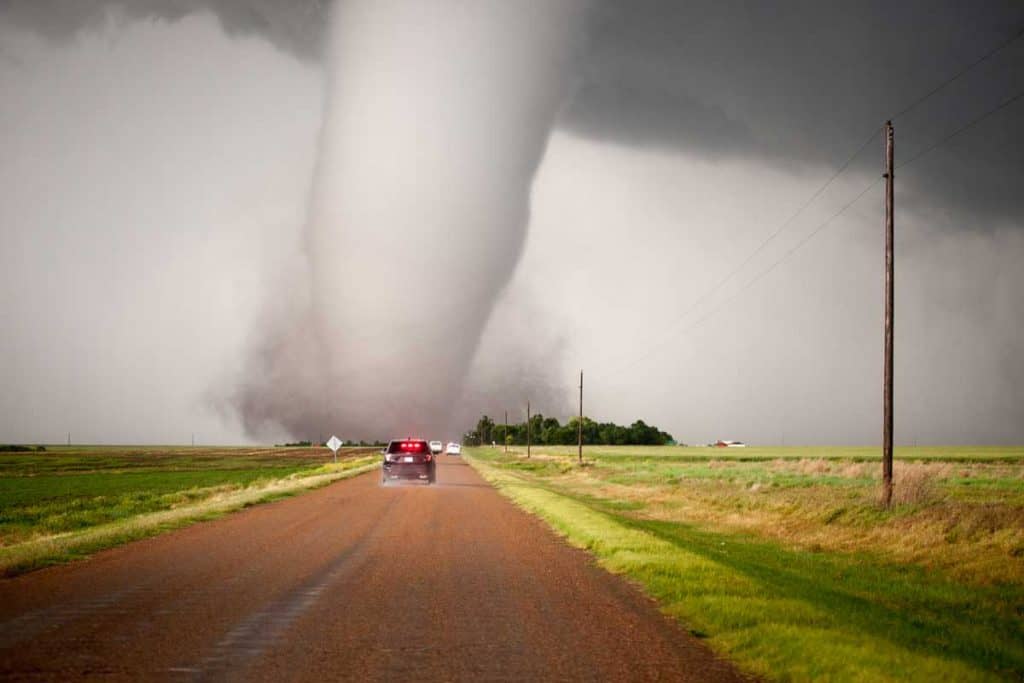 The odds of surviving when being picked up by a tornado are very slim. This especially depends on the strength of the tornado according to the Enhanced Fujita (EF) scale. The EF scale ranges from zero to five: zero being light intensity and five being the most destructive.

If you were to be picked up by a tornado, there's hardly anything you can do to increase survivability. All you can do is cover your head and neck with your arms to protect from the flying debris.

Depending on the strength of the tornado, you and the debris could end up flung a few yards away to a few miles away. While it definitely won't be a soft landing, there's a small chance that you'll be launched out of the tornado with only injuries.

Can A Tornado Pick Up A Vehicle?

Many tornadoes have the strength to rip through houses; they can easily pick up a vehicle. That's why we advise you abandon yours when you're in a tornado's path. Vehicles are one of the biggest debris that gets flown from a tornado, even though they weigh so much.

Although, F-0 and F-1 tornadoes aren't strong enough to pick up a car. A tornado with an intensity of F-2 and higher can pick up your car.

Why Is It Easier For A Tornado To Pick Up A Car Than It Is A Person?

You might be thinking of this question when knowing that a car weight significantly more than a person. Shouldn't a tornado have an easier time lifting you up than a car?

The reason a car is more susceptible to the tornado's wind speeds has nothing to to with its weight. It's because of the amount of air that can travel through it. When lying flat on a surface, plenty of air can travel underneath a car, including a tornado's raging winds. When a person is lying flat, there's no air underneath her/him. Therefore, the tornado winds will have less of an impact; remember we said that the wind speeds at the base of a tornado are much slower.

What Are The Warning Signs Of A Tornado Approaching?

Pay close attention to your weather station or meteorologist. They use the following terms to warn you of a possible tornado landing:

What To Do After A Tornado When Driving? 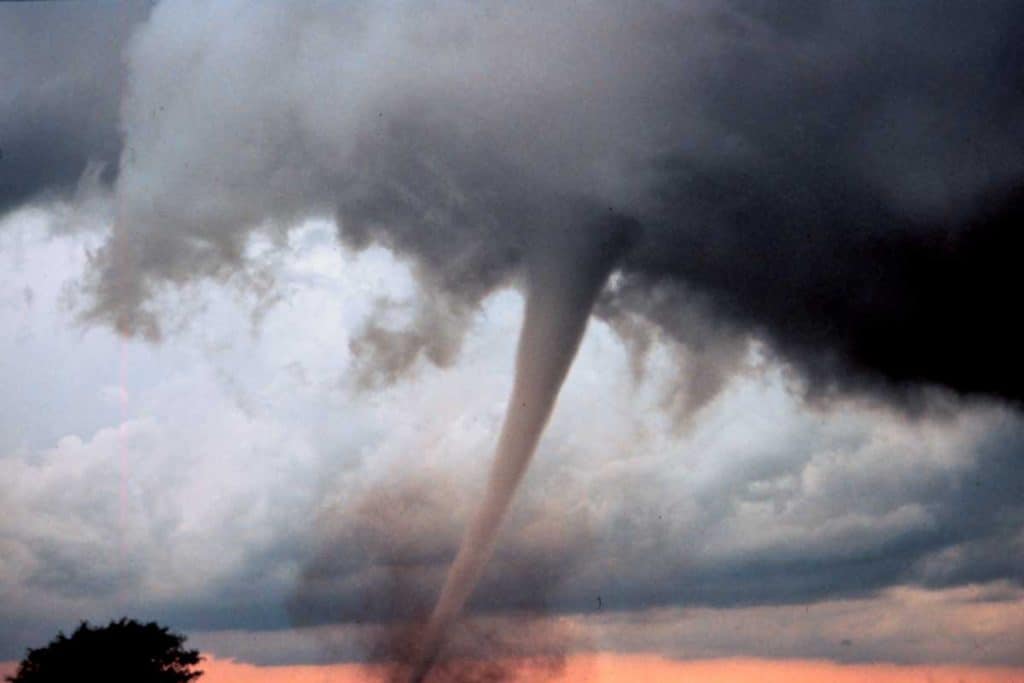 Let's say you completely avoided the tornado in your car and can still drive. The nearby areas may not be so pleasant to drive through. The tornado would have caused debris to be all over the roads, and power lines to be downed. You should wait until officials provide updates on what to do next so you can avoid further risks.

To place everything in a nutshell, here's the recap of how to deal with a tornado while driving in order of effectiveness: