One of the many advantages to owning a pickup truck is that they are great for towing campers, boats, and a variety of other trailers. Not every truck has the same towing capabilities though, and it’s important to know how much your truck can tow before you hitch up a trailer and hit the road. We’ve done some research on how much you can tow with a 2020 Ford Ranger, one of the most popular midsize trucks on the market right now. So, how much can you tow with it?

Whether or not your Ranger has a tow package will greatly affect your maximum tow rating. 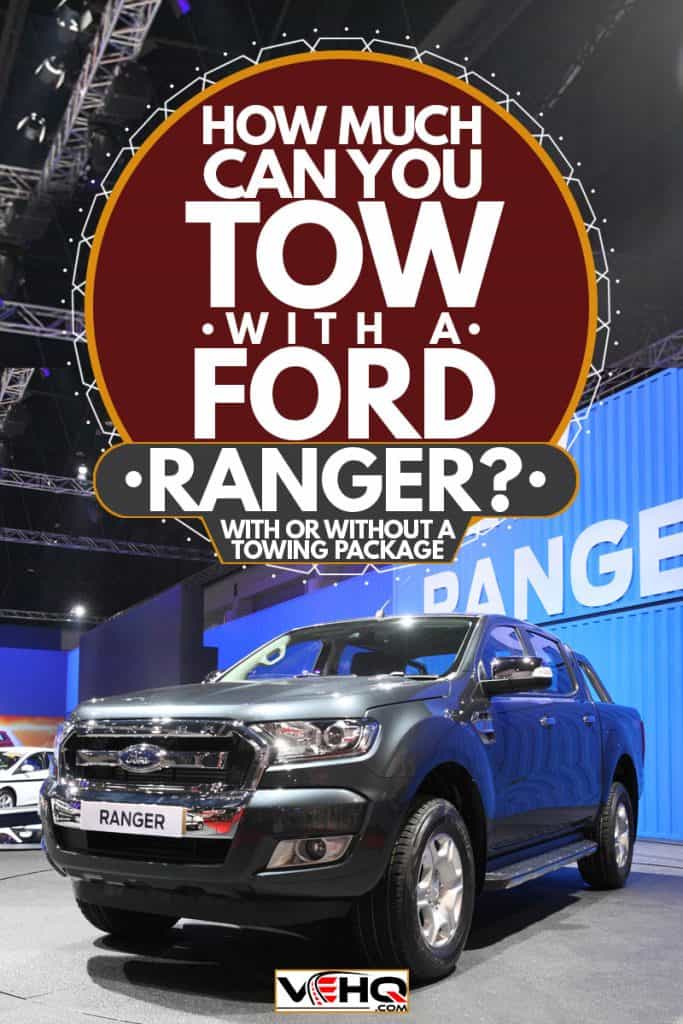 There are a lot of factors that come into play where towing is concerned, and you probably still have some questions. We have answers for you. In this post, we’ll take a look at the Ranger’s payload, what the tow package includes and what is involved in installing an aftermarket one, how the 2020 model compares to the 2019 model, and we’ll also do a quick comparison to the Ford F-150’s towing capabilities.

Keep reading for a deeper dive into towing with a Ford Ranger. 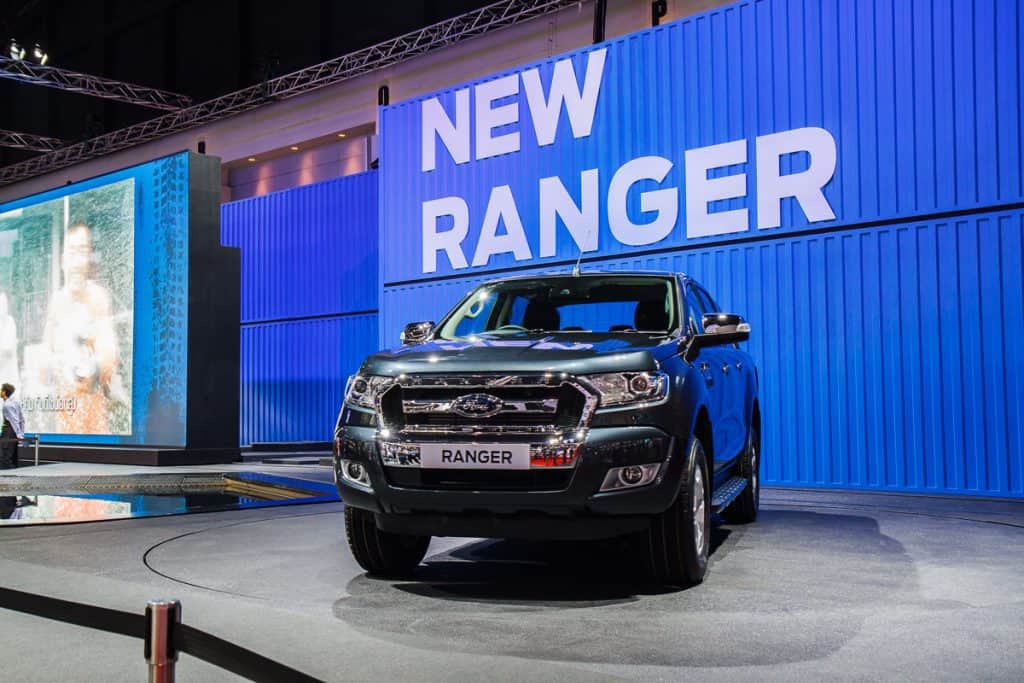 In case you’re not familiar with the term, payload refers to the maximum weight of the load that a vehicle can carry. This includes passengers, luggage, fuel, and anything else that isn’t part of the truck itself.

Payload is calculated by subtracting a vehicle’s curb weight (how much the vehicle weighs by itself) from its gross vehicle weight rating (GVWR). The GVWR is the maximum weight the truck is designed to carry including itself. Think about the GVWR as how much weight can safely be put on components like the truck’s wheels, axles, and frame.

You can read more about payload in our post on the topic here.

The GVWR of a Ford Ranger is 6,050 lbs, and the curb weight is between 3,922 and 4,441 lbs depending upon which model you have. If you want to know for sure what the curb weight of your truck is, find a public scale and get it weighed.

Using the numbers that Ford puts out, the payload of the Ford Ranger is between 1,609 and 2,128 lbs.

What is included in the Ford Ranger tow package?

Trailer Sway Control works by automatically applying the brakes when trailer sway is detected. That sounds a little bit alarming, but the braking is minimal, and is carefully calculated by the truck’s computer system. You probably won’t even notice this is happening as you drive.

The BLIS® Blind Spot Information System is a really handy safety feature that makes driving with a trailer a lot less stressful. Using radar sensors, your truck watches your blind spots for you, and notifies you when another vehicle is in your blind spot. This system works with a trailer hooked up, and is also functional without a trailer.

The tow/haul mode will affect the way your truck responds to your steering movements. At higher speeds, it will result in smoother steering, and at lower speeds, less steering wheel rotation will be required to maneuver the truck and trailer. This means that if you move the steering wheel in an abrupt way on the highway, the truck won’t swerve as aggressively as it would without this feature engaged, and when you’re maneuvering your trailer in a parking lot, you won’t have to fully rotate the steering wheel as much to get your trailer where you need it.

How do you install a trailer hitch on a Ford Ranger?

Installing an aftermarket trailer hitch on a Ford Ranger is not a very difficult task if you consider yourself mechanically savvy.

">To install the hitch receiver, you will need two vise grip pliers, a torque wrench, and a 21mm socket. Safety glasses are also a good idea.

The standard wiring on a Ford Ranger is going to be for a 4 flat harness, but you may need to ">upgrade it to a 7-way plug.

If you do this work yourself and buy your parts from Ford, you will spend just over $700 to get everything. The price breakdown is as follows:

If you were to buy a new Ford Ranger, and order one with a tow package already installed, you’re looking at spending $495 on the tow package upgrade according to Ford’s website. 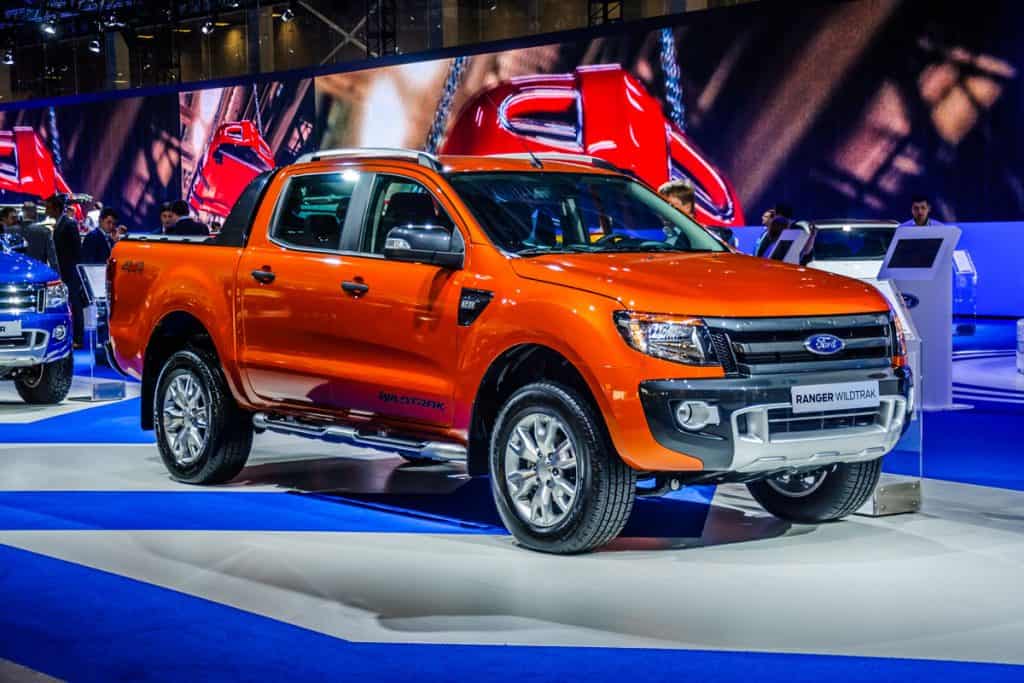 Not much has changed with the release of the 2020 Ford Ranger. Engine, drivetrain, and the general build of the truck remain the same as what is available for the 2019 Ford Ranger along with most other options. What this means for towing capacity is that the 2019 Ford Ranger has the exact same specs as the 2020 model that we have been discussing.

Is the Ford Ranger a half ton truck?

Ton ratings in trucks are a little confusing in today’s world. When trucks were first manufactured, a “half ton” truck referred to a truck with a payload of 1,000 lbs (half of a ton). Since about the 1960’s, due to improvements in how trucks are made and what they’re made from, payloads have increased, but the names have stuck around.

Today, these names have more to do with power and size than payload. A half ton truck refers to full size trucks which can typically haul over 10,000 lbs. With a max possible towing capacity of 7,500 lbs the Ford Ranger is considered a midsize truck, and is therefore not a half ton truck.

In addition to the Ranger, Ford also makes the F-150. These two trucks are similar in size and maximum payload, but where the difference really becomes apparent is in the towing capacity.

There are also more features available in the way of sensors and monitoring for the F-150 than there are for the Ranger that might make towing more enjoyable for some drivers. In addition to the features offered for the Ranger, the F-150 can also include a feature called Pro Trailer Backup Assist and Hill Descent Control which both do just as their names imply.