Is your Toyota 4Runner not starting and giving you a clicking sound when you try to start it? We researched this problem and have the solution for you.

When all you get is a clicking sound when starting your Toyota 4Runner, then the problem could be the electrical supply or the start-up system. The number of clicks that you hear is a clue as to what is causing the problem. A single clicking sound points to a possible starter motor or starter relay problem, while multiple clicking sounds hint at a possible power supply problem—the car battery or alternator.

Let’s look deeper into each of the four possible causes of the problem. Then we’ll talk about the possible resolution to the issue. Read on! 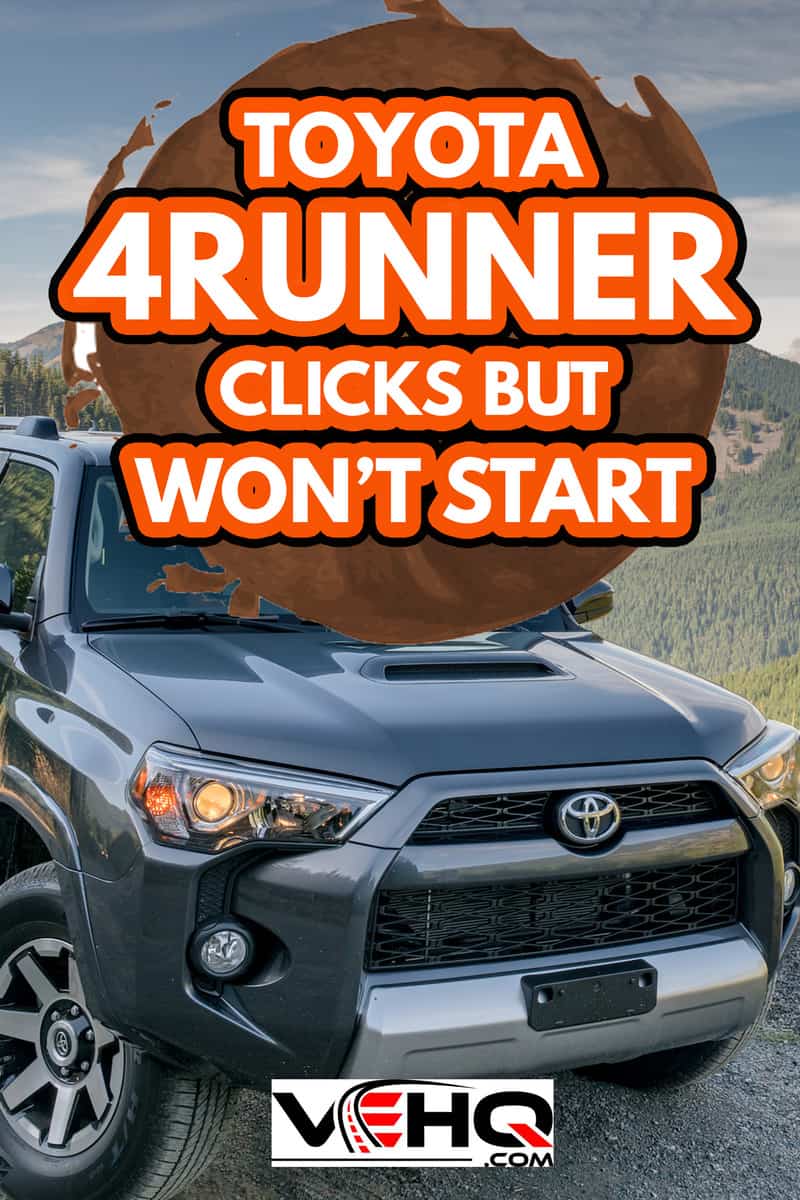 What is a starter or starter motor? 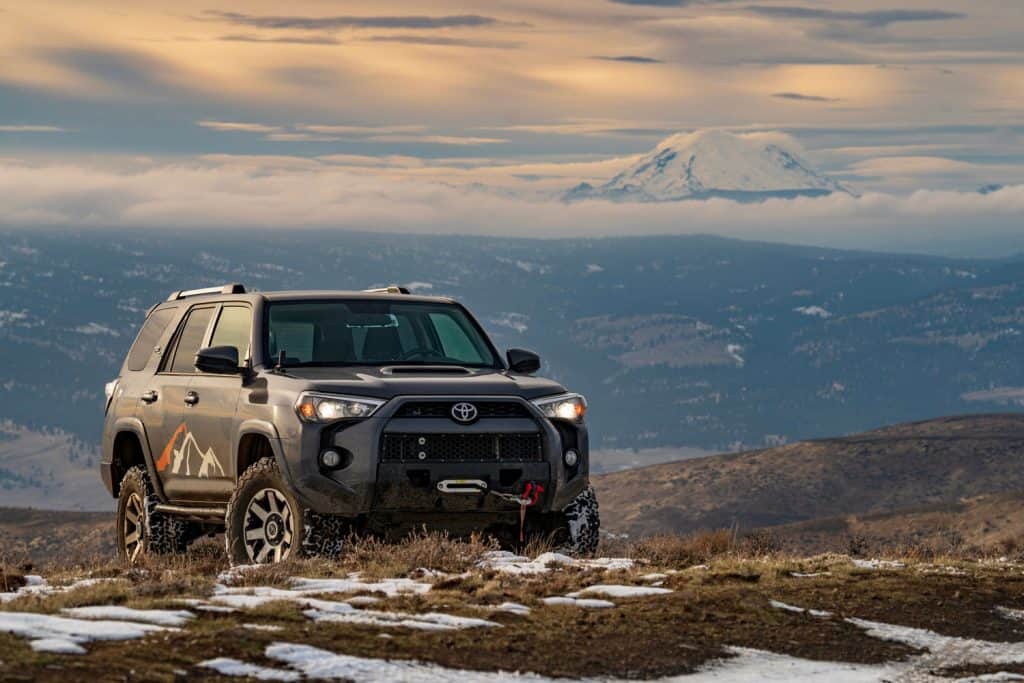 A starter is a critical component of the start-up system of your Toyota 4Runner. It is responsible for starting the cycle inside the engine.

How does a starter work?

An internal combustion engine, like the one in your Toyota 4Runner, is an example of a feedback system. Once they have started, the inertia from the current cycle starts off the next cycle.

A good example is a four-stroke engine. The third stroke releases enough energy to provide power to the engine’s load, the fourth stroke—the exhaust—and start up the first and second stroke—the intake and compression.

However, when the engine is not running, you’d need an external source of energy to start off the cycle. This is where the starter motor comes in.

What can cause the starter to stop working? 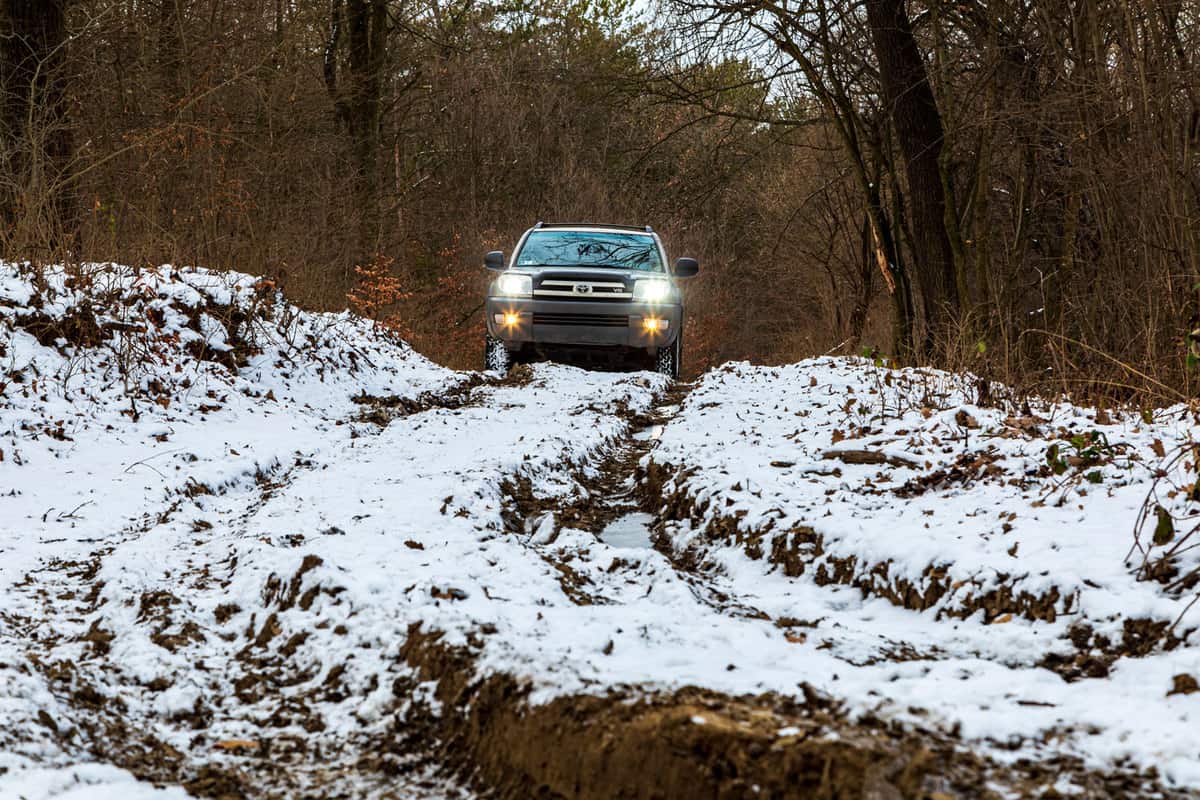 There are several reasons why a starter is not running. Here are the possible culprits:

Loose wiring to and from the starter can make it hard for it to get a consistent supply of electrical power to function properly. This can even cause your starter to not get any electrical power at all to start up.

Damaged or worn-out starter parts will also prevent your starter from functioning properly. This is usually the result of natural wear and aging.

According to Mercedes-Benz of Scottsdale, a starter motor’s lifespan can be anywhere between 30,000 miles to 200,000 miles. Or, when looking at it from another perspective, it can start your Toyota 4Runner 80,000 times.

Oil leaks can also cause starter problems. There are times when the starter is the unfortunate receiver of oil leaks because of where it is located.

Oil leaks can damage the starter. An engine leak is a problem that is commonly ignored. Whenever you discover an engine leak, it is best to check the starter for oil soak because it can cause sudden failure of the starter.

What are the signs of a bad starter? 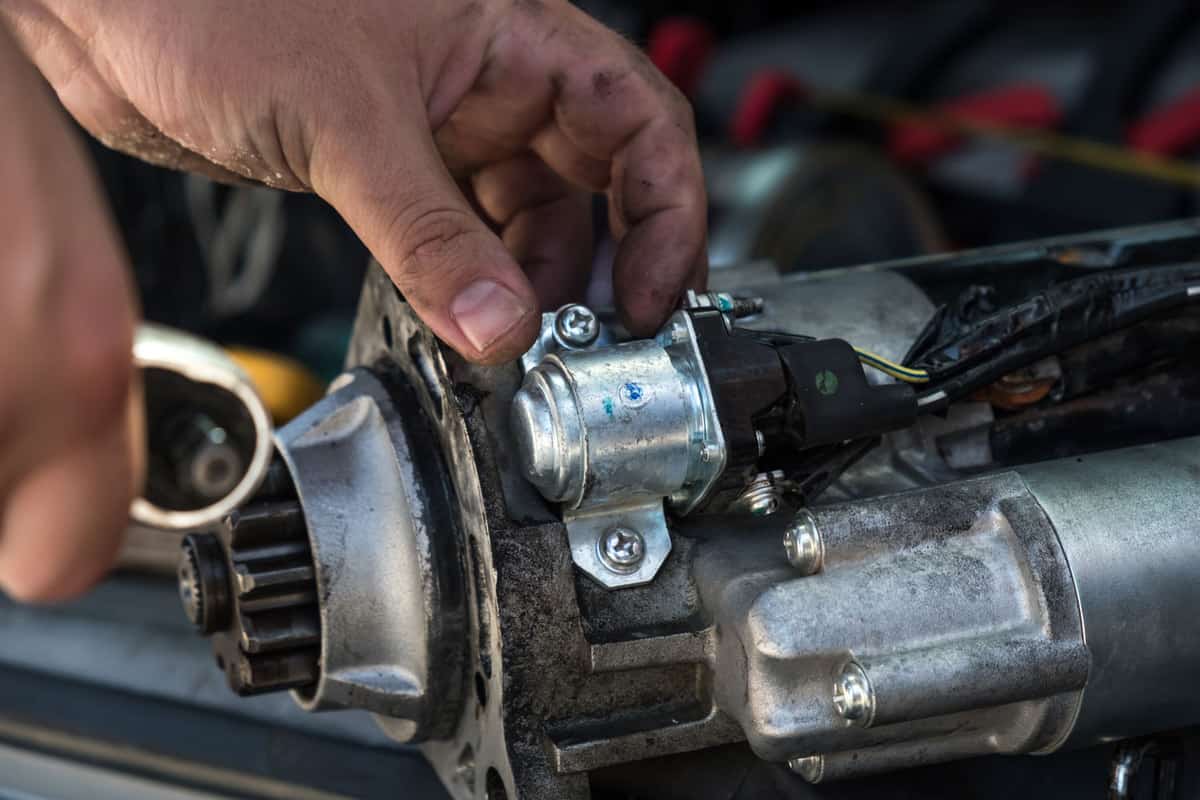 A clicking sound is a common symptom of a bad starter.

Another sign of a bad starter is when you have lights on the dashboard, but the engine won’t start. This means that your Toyota 4Runner has electrical power that is not reaching the starter or that the starter is unable to convert the electrical energy to start the engine.

Grinding noises when you try to start your Toyota 4Runner are also a symptom of a bad starter. This symptom should not be ignored because it can damage the engine’s flywheel.

What is a starter relay?

According to T&X, a starter relay is a small electrical component that serves as a switch for the starter solenoid. It uses the small current from the ignition switch to close a circuit with a much larger current.

How does a starter relay work?

What can cause a starter relay to stop working?

Corroded contact is the most common cause of a starter relay failure. Corrosion in the electrical contacts reduces their conductivity and stops the electrical flow.

An electrical current that is beyond the rated capacity of a starter relay (usually caused by a malfunctioning circuit) can damage the starter relay or burn it out.

End-of-life is also a common cause for starter relay failure. They can get too worn out to work properly.

What are the signs of a bad starter relay?

When you start your Toyota 4Runner, a bad starter relay will make clicking sounds, but will not be able to power up the starter motor because there is no power getting there.

Another sign of a bad starter relay is causing the starter motor to run continuously.

This problem can damage the starter and the flywheel. There are other possible causes of this problem, not just the starter relay. So it is best to take your Toyota 4Runner to a mechanic or a service center once you experience this issue.

The DB Electrical 410-52434 replacement starter for a Toyota 2.4L 4Runner is available on Amazon. Check it through this link.

The alternator and the car battery

How do an alternator and a car battery work?

What can cause the alternator and the car battery to stop working? 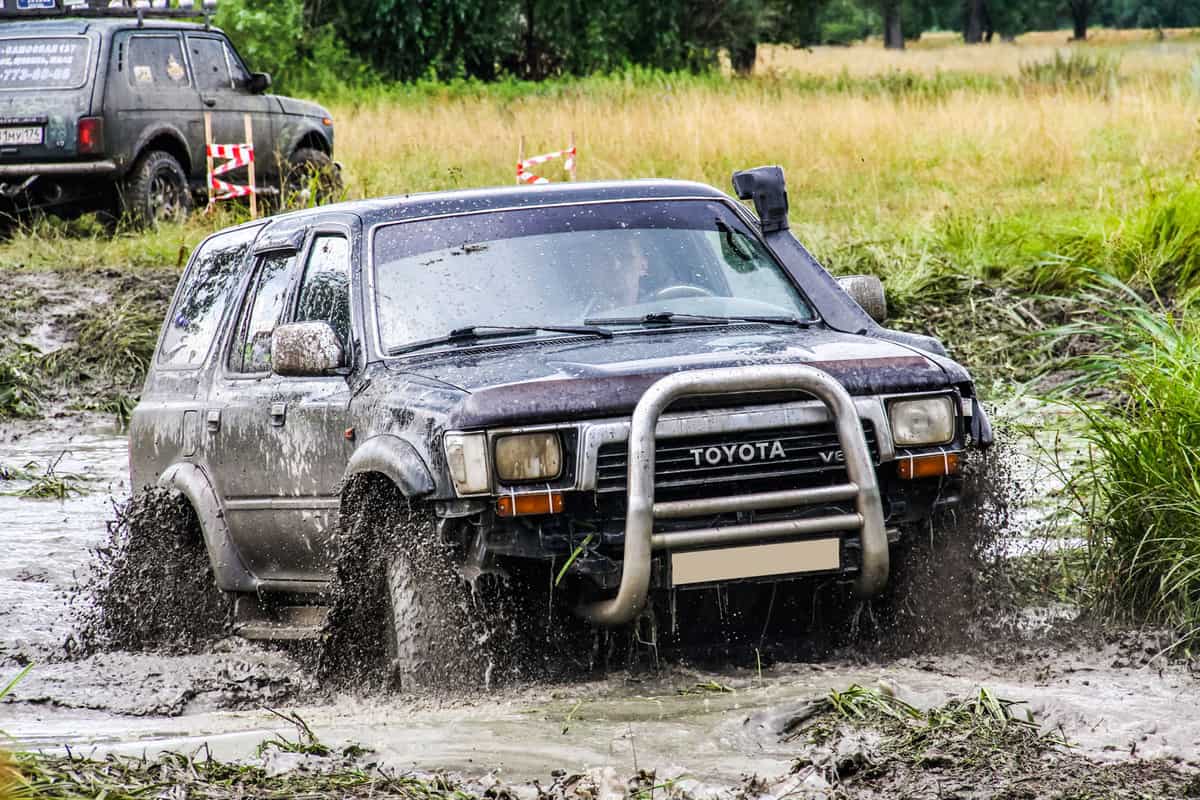 In most cases, alternators go bad due to age and natural wear.

While the alternator can survive splashes of water, getting completely submerged in water or mud can damage it. Have your alternator checked immediately if it experienced getting submerged.

Batteries also go bad naturally due to age—and they have a much shorter lifespan than alternators. A car battery should be replaced every 3-5 years. However, extreme temperatures and frequent short-distance driving can also shorten the life of your car battery.

Corroded and loose contacts can degrade the performance of your car battery. If your alternator is having a problem, your battery might not be able to charge while you’re driving.

What are signs of a bad alternator?

Before your alternator dies, you’d notice some symptoms that it is starting to go bad.

Your alternator is starting to go bad if your engine starts to stall randomly. If it cannot charge your car battery, it might no longer be able to provide sufficient electrical energy to the engine’s fuel injectors.

Another common symptom is that your electrical systems cannot function at a normal level. You might notice that your headlights or your interior lights are dimmer than normal or that they flicker from time to time. Additionally, your automatic windows might open and close slower than usual.

Alternators convert mechanical energy from the engine into electrical power. It is connected to the engine through a belt. If this belt becomes misaligned, loose, or worn out, you will hear squeaking or odd noises coming from under the hood. Additionally, a worn-out belt will no longer be able to spin the alternator fast enough to generate electrical energy.

Moreover, there are bearings inside the alternator that produces a humming noise as it becomes worn out. This sound becomes more intense as the bearings get worn even further.

When you notice any of these symptoms, have a mechanic check your alternator immediately even if your car is still running well. Do not wait for the alternator to completely fail and leave you stranded with an unpowered Toyota 4Runner in the middle of nowhere.

The DB Electrical 400-52073 replacement alternator for Toyota 4runner is available on Amazon. Check it through this link.

What are signs of a bad car battery?

A clicking sound when you start your Toyota 4Runner means that the engine is unable to start. Understanding the possible reasons why this happens can help to make you understand what should be done to fix the issue.

What Half-Ton Trucks Have The Best Towing Capacity?

What Pickup Trucks Can Be Flat Towed?