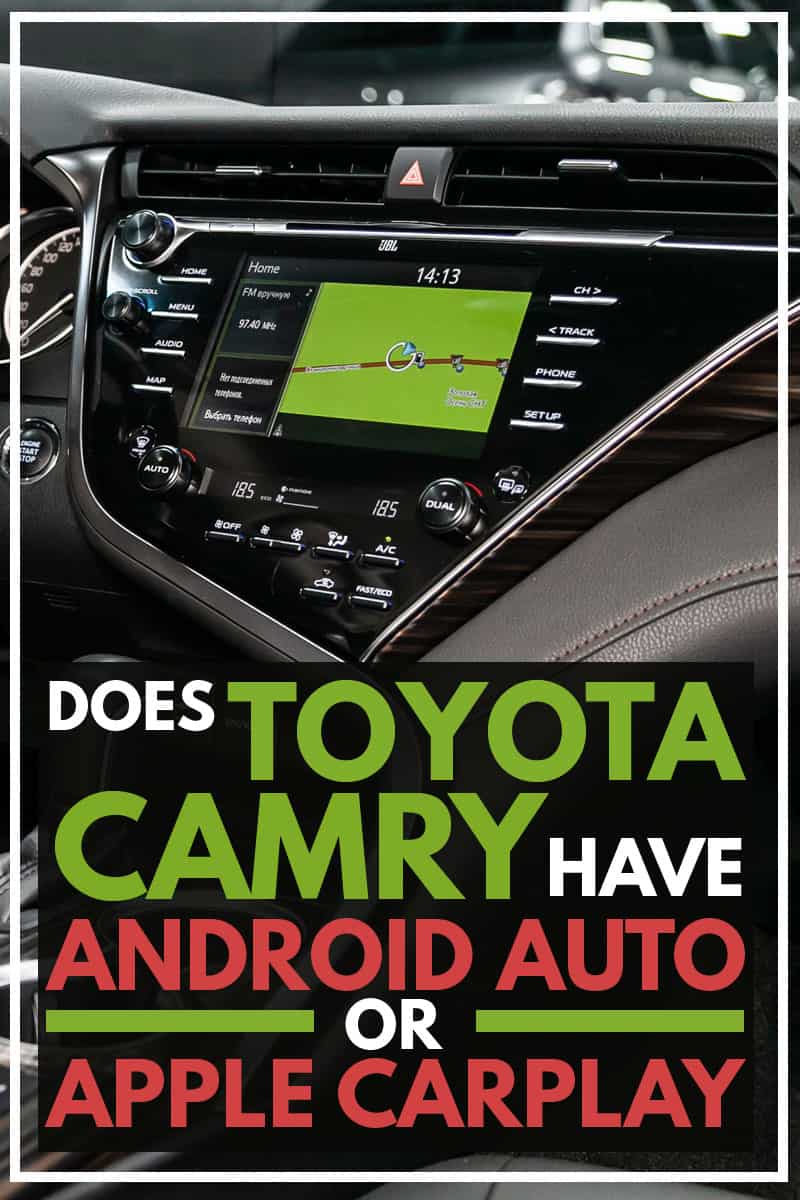 When it comes to in-car listening entertainment, you can get it all through your phone. Today’s apps let you enjoy music, podcasts, and audiobooks, as well as access maps and navigation, so you never get lost. If you’re thinking of buying a Toyota Camry, you may wonder if it has either Android Auto or Apple CarPlay. Which one will you get with your vehicle?

While 2019 Camrys only have Apple CarPlay, the 2020 models include both that and Android Auto. The latter is an infotainment system that Toyota has just introduced, which explains why it wasn’t included in older models.

Want to learn more about Android Auto and Apple CarPlay and if there’s a way to add them to your older Camry retroactively? Keep reading, as we’ll tell you everything you need to know in this article!

What Is Android Auto?

Since it’s a brand-new feature in Toyotas, it’s possible you may not be familiar with Android Auto. This is a car app that allows you to sync your Android smartphone to it. Then you can begin using the slew of Android Auto features, among them web searching, hands-free phone calls, hands-free SMS texting, music playback, and GPS navigation.

Currently, you can get Android Auto in about 36 different countries. The app was first released in 2015 but got a UI upgrade in 2019. This added an app drawer.

What Is Apple CarPlay?

In the same vein as Android Auto is Apple CarPlay. If you have at least an iPhone 5 with iOS 7.1, then you can use CarPlay. It includes many of the same apps you already enjoy on your Apple smartphone, including podcasts, audiobooks, messages (texts), calendar, Apple Maps, Apple Music, and phone calls.

Apple says on their website that “all major vehicle manufacturers” have licensed the CarPlay app, but there are some exceptions. These include vehicles from Tesla Motors and Lada. The app was created in 2014.

Which Toyota Vehicles Have Apple CarPlay?

While just about every other automotive brand hopped on the CarPlay trend, Toyota had refrained, holding out for as long as they could. It was only in early 2018 that Toyota officially announced the CarPlay partnership with Apple. Thus, just 2019 and 2020, Toyotas have this infotainment option.

It is possible for older vehicles, like 2018s and earlier, to get Apple CarPlay installed if their car doesn’t come equipped with it. It’s not free to get the system updated, and you should always go to your Toyota dealer to get this kind of work done.

Which Toyota Vehicles Have Android Auto?

Okay, so Apple CarPlay has been a feature in most Toyotas for nearly two years running now. That’s still not very long considering CarPlay came out in 2014, but as we said, Toyota was one of the last vehicle manufacturers to hop on the CarPlay bandwagon.

They waited even longer to implement Android Auto to their vehicles. According to an article published this year in The Verge, Toyota had avoided Android Auto for so long due to worries about the system’s security. Those concerns must have been abated since, as Toyota confirmed that some of its 2020 vehicles would have Android Auto.

These include the 2020 Tundra, Tacoma, Sequoia, Camry, 4Runner, Yaris, and Aygo. Only European Yaris models will have Android Auto.

If you’re in the market for a new car, especially a 2020 Toyota Camry, then you now know there’s no need to choose between infotainment systems. Your vehicle will come equipped with both Android Auto and Apple CarPlay, giving you the best of both worlds.

What if you have an older Camry instead? As we said before, some of these can get fitted with the equipment needed to run Apple CarPlay. What about Android Auto? Can you have that added to your vehicle, as well?

It’s hard to say for sure, but perhaps. It’s not like Android Auto is new tech, as it’s nearly just as old as Apple CarPlay. That said, it’s not the same as CarPlay. You can’t just take a CarPlay system and expect to use Android Auto on it, as these infotainment options rely on two different operating systems and smartphone brands.

This article from UK resource Wessex Fleet outlines how to use a BlueTooth FM transmitter and a phone mount to get older vehicles up and running with Android Auto. Sure, it’s not the real deal like in 2020 Toyotas, but it’s better than nothing.

You have other options, too. You can always spring for the new 2020 Camry, which does include Android Auto. You can also stick with Apple CarPlay, although that might mean switching phones if you’re an Android user. Finally, you can get a vehicle with Android Auto from a different brand than Toyota. They’re quite late to the game, after all. Manufacturers like Dodge, Chrysler, Chevrolet, Cadillac, Buick, BMW, Acura, Audi, and more have offered Android Auto for years.

Android Auto and Apple CarPlay are two of the biggest and most common infotainment systems found in today’s vehicles. While many car manufacturers offered these systems when they first came out in 2014 and 2015, Toyota only started doing so now.

If you have a 2020 Toyota Camry,  you can get both Android Auto and Apple CarPlay. Having two infotainment systems in one car means your whole family will be happy no matter which phone they use.