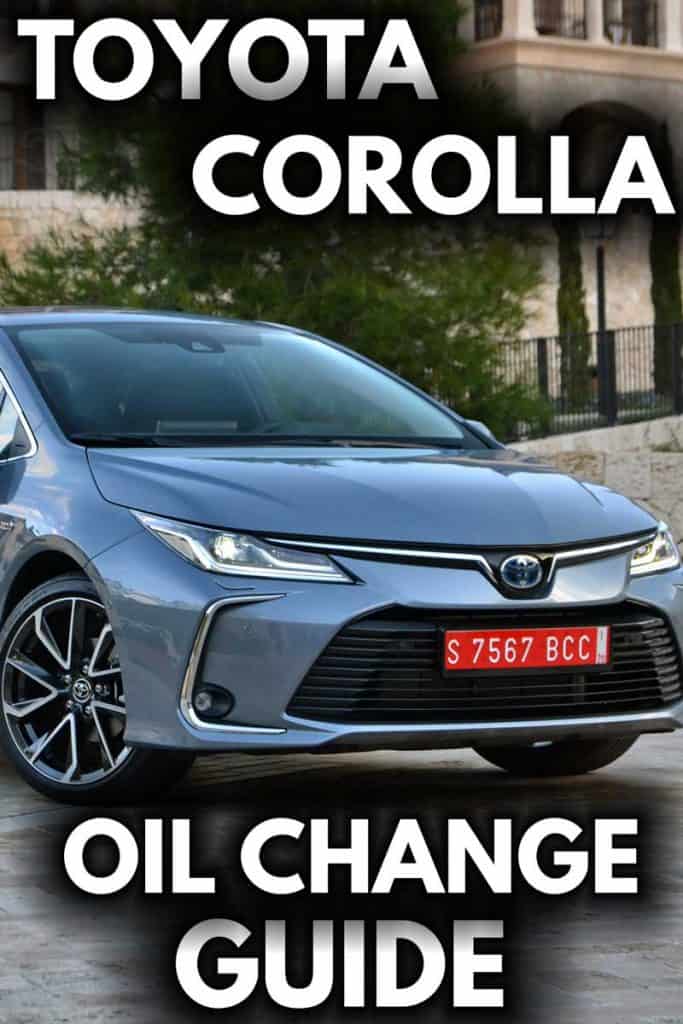 Are you looking to get the oil changed in your Corolla, and thinking about doing it yourself instead of a mechanic? Check out this how-to guide to doing your own oil change first. Keep in mind that most people have the mechanic do an oil change because it sometimes might be cheaper than a DIY oil change.

Before you begin, make sure you have these items at all times: the oil filter with rubber o-ring, the oil filter cap, an oil filter wrench, motor oil, a drainage pan, your car jack and stand, a funnel, and gloves (optional but highly recommended).

This was just a quick way of explaining it. Keep reading to get the detailed instructions on how to change your oil, plus some bonus useful information.

Steps for Changing the Oil in Your Toyota Corolla

Step One: Check the Oil

Start by opening the hood and remove the dipstick from the engine to check the oil level. This will let you know how much oil remains inside before you empty it. Don’t place the dipstick back in; this will help the old oil drain quicker.

Using the car jack, elevate the car high enough to where you can operate directly underneath the vehicle with some space. If you don’t have a jack available, you can drive the vehicle partially up a ramp to raise up the front.

Regardless of how the car is elevated, it’s highly recommended that you have something to prevent the wheels on the ground from rolling like wheel chocks.

When the car has safely risen, you can go underneath to access the engine.

Retrieve your drainage pan, wrench, and have your gloves on (if available), then look for the engine’s oil pan. Look for a long bolt head at the bottom of the pan; this is the drain plug. Place your drainage pan directly underneath, as this is where the oil will flow out of the engine from. Be certain that the pan can hold all the oil in the engine. Reference your owner’s manual to see how much oil your engine can hold.

Unscrew the drain plug and let the old oil drain out. Give it a few minutes so all the oil can drip out. This oil may be hot so be very careful! After drainage is complete, use a rag to wipe off any excess oil left on the drain plug or the engine.

To remove the oil filter, first attach the Toyota filter cap. Then use it to unscrew the oil filter. The filter media should come off with the filter, but sometimes it may still cling to the mounting plate.

After removing the filter media, use a small object like a nail to remove the o-ring from the filter. Replace with a new o-ring and filter media.

To make the filter installation easier, put a small amount of new oil around the gasket.

Under the hood, take off the oil fill cap and insert a funnel. This will help you properly pour the oil into the engine. Check the manual to see how much oil needs to be poured in. Remove the funnel and put the oil fill cap back on.

Congratulations! You just completed a successful DIY oil change. All that's left for you to do now is to check for any leaks.

To do that, start your car's engine and let it run for a little bit (no less than a minute). While it's running, check underneath for any leaks. After a minute has passed, you can turn off the engine again.

If there wasn't any leakage when you looked, then your Corolla is good to go. If there were leaks, have them repaired. Any visible leakage is likely to be from the oil drain plug or the filter.

Check out this video tutorial if you need a visual to help you with this process:

What Kind of Oil Does the Toyota Corolla Use?

The best type of oil used in your Corolla depends on the model. However, SAE 0W-20 is usable across all Corolla models, which is synthetic motor oil. It's highly suggested that the oil you use is Toyota approved "Toyota Genuine Motor Oil."

If you're the owner of a Corolla L, LE, LE Hybrid, or XLE (all of which have 1.8-liter engines), then the best oil to use is SAE 0W-20. This oil type is great for cold weather and fuel economy. If that option isn't available, then SAE 5W-20 is fine as long as you replace it with 0W-20 on the next oil change. These models hold roughly four quarts of oil.

If you own a Corolla SE or XSE (the 2.0-liter engine models), SAE 0W-16 is the best oil. This oil is good if the car is being driven at high speeds or carrying a lot of weight. These models hold slightly under five quarts of oil.

How Often Should I Get an Oil Change?

According to Olathe Toyota, how frequently you should get an oil change also depends on the Toyota model.

How Much Does it Cost For an Oil Change?

This is the question that will help you decide whether you want to perform your own oil change or have a mechanic do it.

Assuming you have the necessary tools already (drain pan, car jack, stands, etc.), you would only need to buy the oil and the filter. That can range from $30 to $50, depending on the store. However, you would also have to consider the time it takes to do it yourself; the time it takes to change it yourself is a little longer than through a mechanic.

Getting an oil change through an auto care center would cost you between $25 to $60 depending on the type of oil and where you go. Since Corollas use synthetic oil, the cost could be on the more expensive side of the price range.

According to Repair Pal, getting an oil change at a Toyota dealership will cost you between $96 and $128. That price can vary based on location, model, and engine. However, if you bought your car brand new, know that with the first two years or 25,000 miles, oil changes come included with your ToyotaCare no-cost service plan.

Take good care of your Corolla

With the right tools available, doing your own oil change is quite simple and might take 30 minutes to an hour out of your day. Successfully performing an oil change will give you a feeling of confidence and pride. Just know that there are cases where it would be cheaper and less risky to have it done at an auto shop.

More about the Toyota Corolla -

Can a Toyota Corolla Tow a Trailer?

15 Toyota Corolla Interior Accessories You Totally Should Get