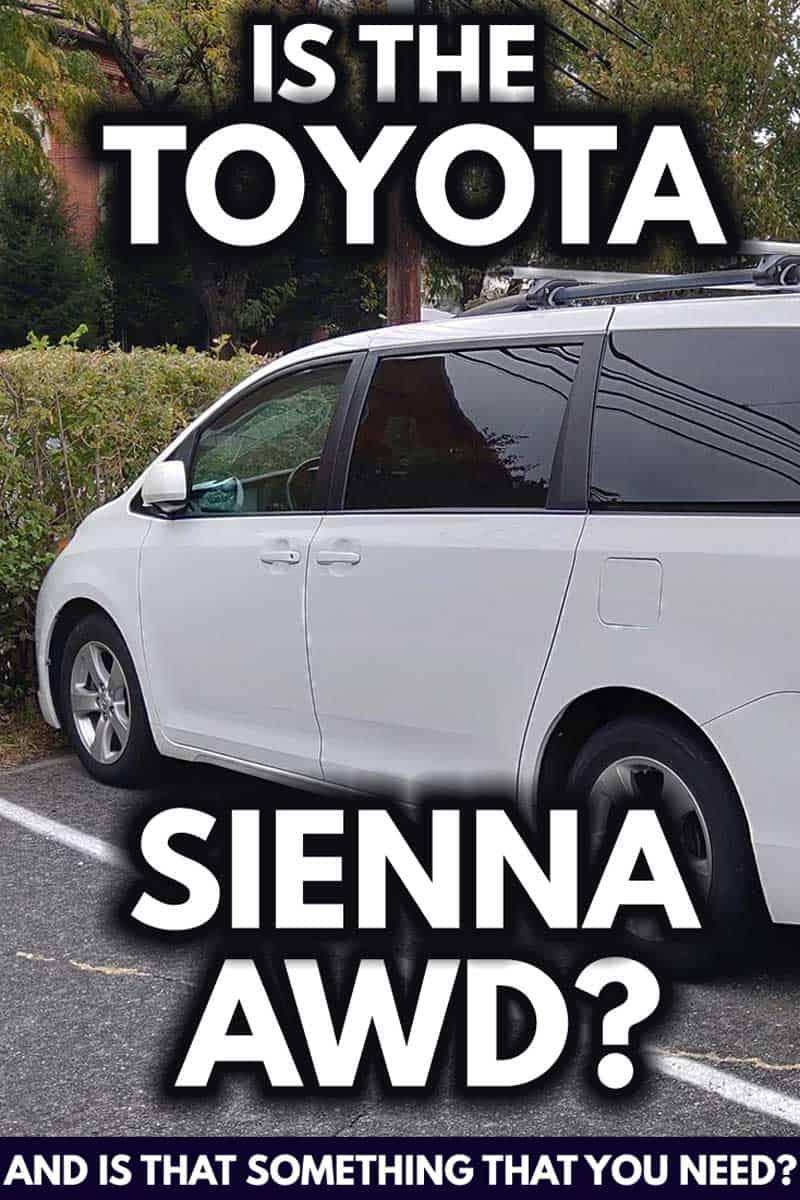 If you are in need of a vehicle with plenty of space that can also thrive in all weather conditions, you have probably wondered if any minivan is up to the task. Surprisingly, many vehicle shoppers are not aware that any minivans are offered with all-wheel-drive. In this article, we will explore the Toyota Sienna's drivetrain and whether all-wheel-drive (AWD) is offered on the model.

In short, yes, the Toyota Sienna can be had with AWD. Front-wheel drive is standard across the model range, but most trim levels can be made with AWD. Today, many Siennas, especially those sold in the snow belt, are sold with all-wheel-drive. Interestingly, the Toyota Sienna is the only minivan sold in the United States that offers anything other than front-wheel-drive, and the easy choice for any minivan shoppers who need AWD.

That's not all there is to the question of the Sienna's AWD system, however. For example, there are some trade-offs involved with choosing AWD over front-wheel drive (FWD) Keep reading as we discuss the ins and outs of the only minivan offered with all-wheel-drive.

Currently, in its third generation, the Toyota Sienna is offered with either front- or all-wheel-drive. Choosing the AWD option means skipping the base-level "L" trim and selecting the "LE" or any high trims. Ticking the "AWD" box also means doling out extra cash - roughly $2500 more than the FWD models for the 2020 model year.

Whether it's because of the safety factor, light off-roading, or frequent snow driving, many buyers today consider AWD a must-have. And no other manufacturer today offers AWD on a minivan, so this makes the Sienna an easy choice for some shoppers who need the added capability of the AWD system.

When did Toyota Sienna introduce AWD?

Toyota first offered all-wheel-drive on the second-generation Sienna, which debuted for the 2003 model year. AWD has continued to be offered on every model year since, all the way up to the current 2020 Sienna.

How does the Toyota Sienna AWD System work?

As the name implies, the AWD system in the Toyota Sienna differs from the standard system by delivering power to all wheels instead of just the front two. Toyota also uses what they call "Active Torque Control" to monitor the status of each wheel. During normal driving conditions, the AWD Sienna works just like any other minivan and driving the front wheels only.

However, if the system detects and slippage, such as on snow or mud, the Active Torque Control system sends power to the rear wheels. It will also power the rear wheels if it detects enough body roll that slippage is possible. The system will send more power to the wheels with the most traction.

This is very similar to systems that are prevalent on many crossover SUVs. By only powering the front wheels during most driving, the engine is less stressed and therefore delivers better fuel economy. Then, you have the AWD system as a backup should you encounter any slippery roads.

What is the MPG of the AWD Sienna?

Opting for the AWD version of the Sienna means paying more upfront as well as more for gas, unfortunately. For the 2020 model, the AWD Sienna is rated at 18 city/24 highway (compared to 19/26 for the front-drive version).

Earlier versions were even thirstier - 2016 models are rated at 16/23 compared to 18/25 for front-drivers, for example. To find the exact figures for the model year you are interested in, head on over to fueleconomy.gov and search for it.

Is Toyota Sienna All-Wheel-Drive Worth it?

An all-wheel-drive minivan might seem redundant in the modern world 3-row crossover SUVs. There are some valid reasons to choose the Sienna, however. Anyone who wants the security offered by all-wheel-drive may be enticed by the advantages minivans offer over comparable SUVs:

First and foremost - space. Even the largest crossover can't match the cavernous interior offered on modern minivans. You will not only get more cargo space, but more legroom and space to spread out in the second and third rows. Space alone makes the AWD Sienna worth it for many buyers.

Ease of Entry and Exit

Another reason to choose the AWD Sienna is for the low load floor when compared with SUVs. This makes it easier to enter and exit, especially for elderly and very young occupants. It's no wonder those are two of the main demographics for minivans.

The advent of crossover SUVs has negated this advantage slightly, but minivans' lower center of gravity means they handle more like a car than a truck. Buyers who don't want or need to ride 8 inches off the ground will find the Sienna AWD comfortable and easy to drive around town.

When the AWD Sienna is Not Worth It

So, there are many reasons to consider the AWD Sienna, but it's definitely not for everyone. If you are lucky enough to live in a climate where inclement conditions rarely or never exist, then there is no reason to pay extra for this feature.

Does Toyota Sienna AWD have a Spare Tire?

Instead of a spare tire, Toyota fits the AWD Sienna with run-flat tires. This is a common theme among new cars these days, and it can be a disadvantage if you are to have a tire blowout in the middle of nowhere, so some owners choose to carry a small spare along in case of emergencies. Of course, that option eats away at some of your cargo space.

The Sienna is offered with either 7- or 8-passenger configurations. The difference lies in the middle of the second row. 8-passenger versions feature a small middle seat between the captain's chairs. Unfortunately, Toyota does not offer the AWD Sienna in the 8-passenger configuration. So, if you truly need to transport 8 passengers, you will either have to stick to an FWD minivan or, if AWD is mandatory, choose a large SUV instead.

This is a tricky question to answer, but the final verdict is that the AWD Sienna is better in snow than the FWD version. Simply because the rear wheels are able to kick in and help out, the AWD Sienna is able to accelerate from slick spots that might cause the FWD minivan to get stuck.

You should know two important things about snow driving before we go on. First, tires are the main thing giving your car traction in the snow. An FWD minivan with good snow tires will outperform an AWD van with poor tires in the snow, every time. Also, AWD does not help your car corner or stop in the snow - all cars have "4-wheel stop," after all.

So, with those caveats explained, we can confidently say that an AWD Sienna with good snow tires will be very competent in the snow. And even with standard all-season tires, all-wheel-drive helps when it comes to climbing up steep angles in the snow. Because the weight of the car shifts to the rear wheels in those situations, front-drive vehicles can easily lose traction on steep, snowy inclines.

Can You Take a Sienna Off-Road?

Because of the all-wheel-drive system, you might be wondering if you can take the Sienna off-road. As you can imagine, few owners ever even try, so it's hard to find any actual testimonials to the Sienna's off-road prowess. Think of the Sienna more as a large AWD wagon than a beefy SUV.

However, because of the low ground clearance and poor approach, breakover, and departure angles, it would not be advisable to tackle any large obstacles. However, by sticking to somewhat-maintained dirt and gravel roads - pretty much any road used to access large campsites - the Sienna should work just fine when you venture off the paved path.

Okay, now we have explored the ins and outs of the Toyota Sienna's AWD system. As you shop for your next minivan, carefully consider all of the advantages and disadvantages that come with opting for the AWD Sienna. Many buyers choose the AWD, despite the cons, simply because of the safety factor. After all, most minivans are used to transport children, and few things are as important to parents than safety. Just make sure your tires are up for the task as well!

GREAT information, Thanks I had a 98 front wheel drive sienna in Mexico in the Mountains . Over The TOP. Total Reliable . Will climb trees if chained up.. So impressed, Iam on the Hunt.