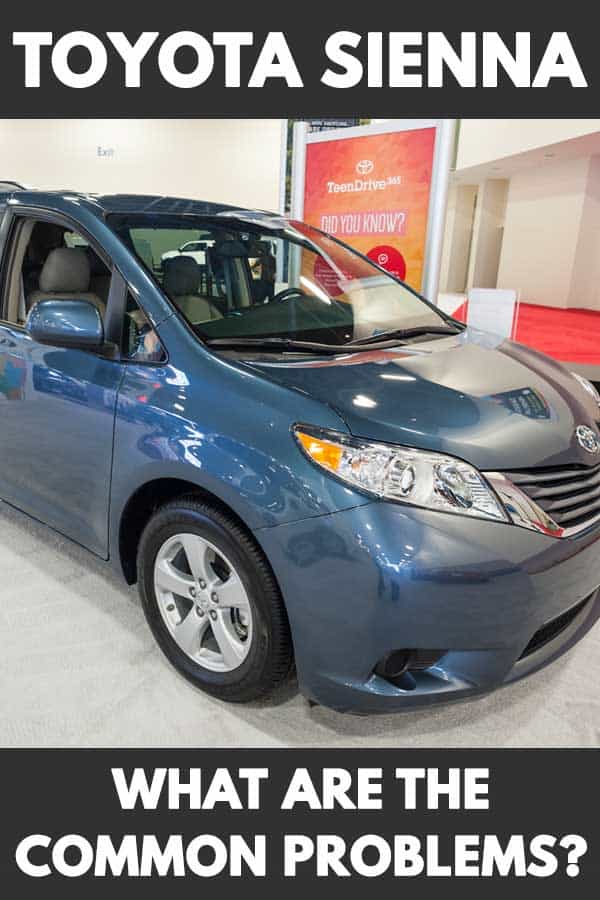 Whether you plan to buy a new or used Toyota Sienna, you’re probably wondering what types of problems they tend to have. With Toyota’s reputation for reliability and the family-friendly features of the van, you might expect it to be a workhorse that never quits. But the minivans have their fair share of mechanical and other problems. Toyota Siennas first rolled out in 1997, with models from 2010 forward being part of the third generation.

While the Sienna is a reliable car, some older models suffered from these problems:

Toyota drivers and the company themselves recognize that these problems could make driving some Siennas a headache. Serious safety issues have triggered recalls, so if you're buying a used Sienna, you should check and see if the issue has been fixed already.

We’re looking into the common issues with Toyota Sienna minivans so that you know what to expect when driving one. Using data from consumer sites and recall notices, we’re breaking down how safe and reliable Siennas are, including differences among the three generations.

Among the three generations of Siennas, listed below, the most problematic years in terms of recalls are 2011, 2005, and 2006. On average, second-generation Sienna minivans had the most complaints.

How Does Toyota Handle Recalls?

Before looking at Sienna's problems, we need to consider how Toyota manages its recalls. When the manufacturer issues a recall for a vehicle, it’s either due to safety or performance issues. Toyota may not be required to issue a recall, by law, but they often do it on their own.

You can check for recalls on your vehicle by checking the recall section of the Toyota website. You can also consult the National Highway Traffic Safety Administration (NHTSA) for recall information.

Toyota also mails out recall notices to owners of affected vehicles. Often, you need to bring the recall letter to your service department for repairs. Keep in mind that Toyota often requires pre-approval for recall work, and you may need to go to a specific shop to have it covered.

Do I Have to Pay For the Recall Work?

If Toyota issues a recall on your vehicle, they will cover the repair costs. Before you make an appointment for service, read your recall notice thoroughly for any limitations on the fix they’re offering. Ideally, a visit to a Toyota dealership will get you responsive and brand-specific service.

Of course, if the service department uncovers another problem while your vehicle is undergoing repair work, you must decide whether to agree to those fixes. But the shop will provide you with documentation of the problems and give you an estimate on the cost, so you can always go elsewhere if you prefer.

In the past, there were common Sienna problems that Toyota refused to cover. We have the details on those here, too. But take note—these weren’t official recalls, and many wound up involving legal action, too.

Other Notes: This issue affected multiple brands and models with Takata airbags.

Problem: Wheels: Wheels May Crack After an Impact

Solution: Dealers will inspect the wheels and replace them as necessary, depending on the production location.

Solution: Toyota initiated a program to replace dashboards or reimburse customers who replaced theirs already.

Other notes: At first, Toyota resisted paying for the problem. After pushback, they initiated a repair program, under warranty.

Solution: Dealers will disconnect seat heaters and refund the purchase price of the seat heater accessory.

Solution: Dealers will replace the shift lock solenoid and reapply the grease.

Solution: Dealers will replace the spare tire carrier with an improved one.

Other notes: The repairs are performed in phases, starting in 2015 with an interim solution of relocating the spare tire to the luggage compartment until parts arrived for replacement.

Solution: Dealers will check the crankshaft pulley and replace it as necessary.

Solution: Toyota originally refused to cover the repairs, but eventually agreed to pay in cases where owners can prove “reasonable effort” at maintaining their cars.

Other notes: A class-action settlement followed this issue.

Solution: Toyota refused to take the blame for the issue and stated there was no permanent mechanical repair.

Other notes: A 2018 lawsuit covered this problem, but Toyota created a manual with no real solution as a response.

Solution: Toyota refuses to cover rodent-induced damage because it says those are “environmental” issues, per their warranty lingo.

Other notes: Multiple lawsuits addressed soy-based wiring issues, but none have been successful.

What is the Best Used Sienna to Buy?

The NHTSA reports the most complaints about the 2004 Toyota Sienna. Most commonly, drivers report structure problems, followed by issues with latches/locks/linkages, and finally, electrical system challenges. Customer reports shed light on which model of Sienna you may not want to buy, purely based on what consumers say they don’t like about the vehicle.

In contrast, the more recent 2019 Sienna has the fewest complaints—but that could be because it’s still new. 2018 Siennas fared well, too with few complaints on the NHTSA website. If you prefer an older used Sienna, 2016 is the “oldest” with under 100 driver complaints—and few recalls, too.

Does the Toyota Sienna Hold Its Value?

Overall, consumer reviews average an almost four out of five-star rating for the Toyota Sienna, per Consumer Affairs. In short, despite the numerous recall issues and complaints, the average owner is happy with their Sienna.

What about Sienna's values over time? Well, the 2015 Toyota Sienna earned the best resale value award from Kelley Blue Book. Per KBB, the resale value at 36 months was 57.9 percent. At 60 months, the figure was 44.3 percent.

While there are plenty of challenges with owning a Sienna, the good news is that they are relatively safe vehicles overall. The Insurance Institute for Highway Safety (IIHS) gives the 2019 Toyota Sienna good overall ratings.

Their crash test results apply to a range of vehicle years, as IIHS uses different year models for various tests. Front crash prevention is superior, roof strength is good, and side crash test ratings were good overall. Passenger and driver injury measures were all good or acceptable.

Are you concerned about insurance costs? While a minivan isn’t the cheapest vehicle to operate or insure, you can expect to pay an average of $150 per month for coverage. Of course, an older model year may cost less than a brand-new Sienna with a host of modern features. At the same time, newer models offer up safety features like collision prevention that help net you insurance discounts.

Among other ratings, the Toyota Sienna is also one of the longest-driving minivans, with many owners keeping their vans for 15 years or more. So while there are some significant problems with Siennas in general, most drivers are fairly happy with their purchases.

And when it comes to those common problems, Toyota has taken proactive measures in addressing many of them. From replacing Takata airbags and power door equipment to refinishing dashboards—purely for aesthetic appeal and not safety reasons—Toyota’s action on their Siennas is helpful for owner drivers everywhere.

Read more: Is the Toyota Sienna AWD? (And is that something you need?)

How Many Seats Does A Chrysler Voyager Have?

How Much Does a Toyota Sienna Cost? [2020 Edition]