There is no doubt that the Chevy Silverado 3500 is one of the most elite pickup trucks on the market. The 3500 has great cargo volume, trailering capabilities, torque, and horsepower. But when it comes to a spec like payload capacity, detailed information is difficult to find. S0, we researched all of the specs and feature combinations available on the Silverado 3500 to provide you with a direct answer here in this post.

The Chevy Silverado 3500 comes in a staggering 28 different feature combinations with slightly different payload capacities. But, the two factors that affect this measurement the most are engine type and whether the truck has dual rear wheels or not. Here is the maximum towing capacity by engine and wheel type:

The gasoline-powered dually version of the Chevy 3500 is clearly the winner of the payload capacity challenge. That being said, there are some caveats that you should be aware of if you are considering buying a new Silverado. So, continue reading as we dive into more about the Chevy Silverado 3500 and the definition and importance of payload capacity. 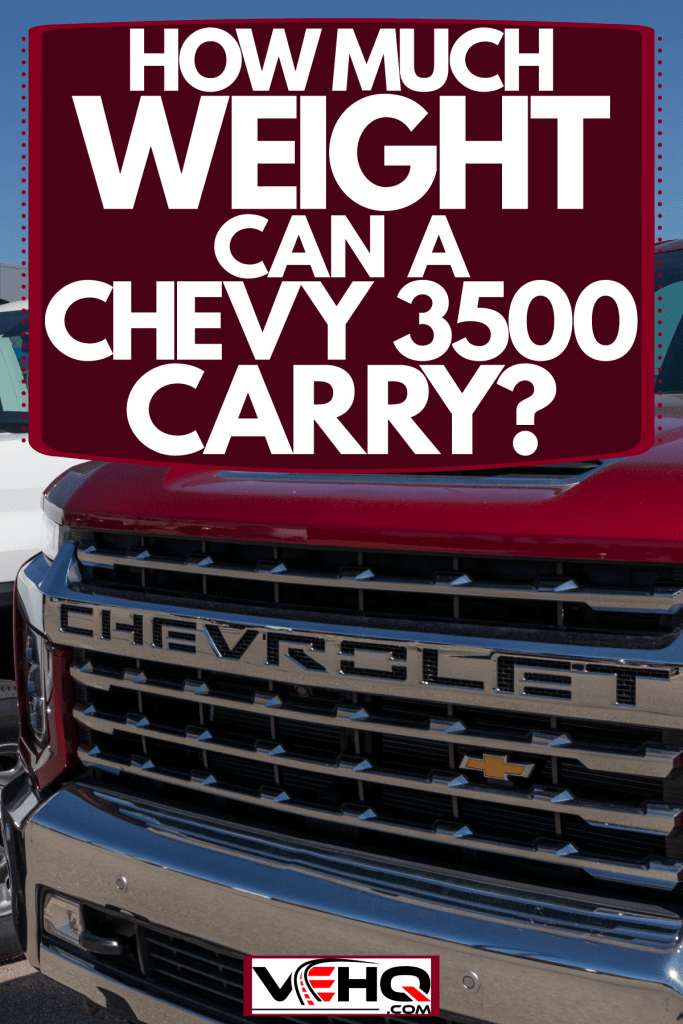 Payload Capacity on the Chevy Silverado 3500

The Chevrolet Silverado 3500 has a payload capacity that ranges between 4,013 and 7,442 pounds. This range is so wide because multiple factors determine the payload capacity. For the Silverado, these factors are cab type, bed type, drivetrain type, engine type, and whether or not the truck is a dually. All of these options can be combined in different ways to build 28 unique Silverado specs.

What is Payload Capacity?

After much talk of payload capacity, it would probably be nice to define it more formally. Payload capacity is the estimate of exactly how much weight a vehicle can safely carry on its frame. This means the weight that is inside the interior of the car in the seat or trunks. But in trucks like the Chevy 3500, the payload capacity measurement also includes what the truck can support inside the truck bed.

The weight of passengers within the car or truck also counts towards the total payload capacity. This is especially important to remember if you have a truck that supports four or five passengers. You can't have a full cab of passengers and then still expect to be able to fill your truck bed to the payload capacity. You'll be a few hundred pounds over every time, and that can be dangerous.

What Happens if You Overload a Pickup Truck?

You run a lot of risks if you load your pickup truck beyond its payload capacity. Having an overweight truck puts a lot of stress on the vehicle's suspension system, and it could cause something to break. Additionally, driving a pickup truck that's over payload capacity is dangerous. The extra weight causes handling capabilities to decrease rapidly, making it more likely you could lose control.

The reality is that automakers have rigorously tested every aspect of the vehicles that they produce. Meaning that if Chevy says the Silverado 3500 has a payload capacity of 7,442 lbs, that means they've tested the truck to failure multiple times, and that is the last safe weight you can transport.

How Does Payload Affect Braking?

As discussed in the previous section, being over payload greatly affects a vehicle's handling. The two areas where this is obvious are during turning and braking. Both of these are affected because it's harder to both steer and stop a heavier vehicle. As for the brakes specifically, the payload capacity is vital.

As your brakes are working hard to stop an overloaded vehicle, they can become overheated or even lock up. Both causing potentially serious and immediate problems and perhaps even needing repair.

What Does the 3500 Stand for on Chevy Silverado?

Most of the time, when there are numbers associated with a vehicle name, it has something to do with the engine. But in the case of trucks like the Chevy Silverado, the number following the name shows how much weight it's capable of carrying. One of the biggest of all the Silverados is the 3500, and that number means the truck is capable of carrying one ton of weight, or 2,000 pounds.

These weight classifications assigned to trucks only represent standard sizes and don't show exactly what the truck's payload capacity is. For example, the payload capacity on the Chevy Silverado is much more than 2,000 pounds regardless of trim or engine type. So now it's a nice uniform way of naming and classifying trucks instead of a precise measurement. Otherwise, we'd be talking about the Chevy Silverado 7442, which doesn't have the same ring to it as 3500.

How Many Yards of Gravel Can a 1-ton Truck Haul?

Now that we understand the weight classifications of commercial pickup trucks, we can take a look at an example. A truck that has the number 3500 attached to it is sometimes called a "1-ton truck." As we said in the previous section, just because a truck like a Chevy Silverado is a 1-ton truck doesn't mean that it can only carry one ton of weight. In fact, it's almost a rule that it's always much more than a ton.

If we take the Chevy Silverado 3500 with the biggest payload capacity, the gasoline-powered V8 rear-wheel-drive dually, we can examine how much gravel it can carry. According to Earth Hauler, Inc., an earth-moving company based in Texas, a cubic yard of gravel weighs around 2,650 pounds on average. If our Silverado 3500 has a payload capacity of 7,442 lbs, this specific 1-ton truck can safely carry 2.8 cubic yards of gravel.

What is the Chevy Silverado 2500 HD Payload Capacity?

The Silverado 3500 standard or dually may be too much truck for you. This is completely understandable because it's a massive truck. But can you downsize to the Chevy 2500 HD without giving up too much payload capacity? Like its larger sibling, the Silverado 2500 has many varying trims created by combinations of features that all have a small effect on payload capacity. Here are the trims with the highest payload capacity for each engine option:

The Silverado 2500 has a smaller payload capacity range of between 3,536 and 3,979 pounds. The lack of a Dually option in the Chevy 2500 HD makes the payload capacity significantly less. But still, the nearly 4,000 pounds isn't bad for a truck of its size.

If you're looking for a truck with a high payload capacity, then the Chevy Silverado 3500 is a solid option. Both the dually and regular versions of the Chevy 3500 have respectable payload capacities that will carry what you need. If the 3500 is too large for you, the smaller Chevy 2500 is another good option. With whichever truck or vehicle you have, it's crucial always to follow the payload capacity. Doing so can avoid damage to your car or even yourself.

What does Payload Capacity actually mean in a Pickup Truck?