If you are looking for vehicles with a good quality performance engine, you should consider cars with the Ford Coyote engine. But what vehicles come with the Coyote engine? We've done the research for you, so keep reading to see what we found.

The Coyote engine is a 5.0L engine made by Ford. First used in 2011, it appeared in the Mustang GT, Australian Ford Falcon, and the Ford F-150. Since then, it has been used in various trim packages for those same vehicles, as well as the Panoz Esperante and the British TVR Griffith. Coyote engines are also available as a crate engine, so you can swap it into vehicles other than those it came with from the factory. 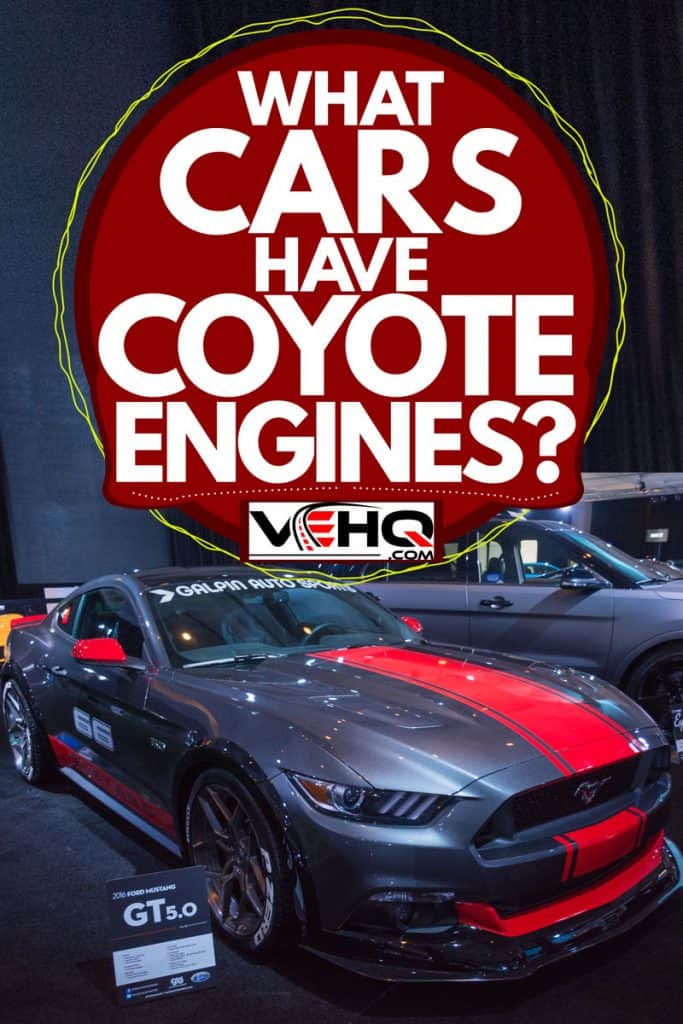 The Ford Coyote engine is part of Ford's Modular engine series. It was first introduced in 2011 and was the first 5.0L engine the company made since 2001. In the mid-1990s, Ford phased out the older engines in nearly all of their vehicles, using the 4.6L Modular engine to replace them in most cases. That changed with the introduction of the Coyote, bringing back the 5.0L engine. Both the Mustang and F-150 used the Coyote that year, as did the Ford Falcon in Australia.

In the 1980s, Ford began work on the Modular engine series to improve on the designs of their engines of that time. They wanted something power-dense, reliable, and easier to produce. The first engine in the series was the 4.6L V8 that began use in 1991. Eventually, various versions of the Modular series replaced the majority of Ford's pushrod engines.

The Coyote is designed to compete with the LS3 engine in the Chevrolet Camaro and the 6.4L Hemi in the Charger. They also wanted it to use their Modular engine production assembly. They wound up with a 3.63-inch bore, 3.65-inch stroke, 4 valves per cylinder, and a dual overhead cam engine that redlines at 7000 rpm.

Generally speaking, the version used in the F-150 has a lower-lift cam, lower compression, and other changes to provide better cooling that towing requires. The differences also prioritize torque over horsepower.

The Australian version used in the Falcon from 2011-2016 added a supercharger.

How Good Is The Coyote 5.0 Engine?

When you ask any group of car lovers what makes for a good engine, you will likely get many different answers. Good is very subjective, but there are some things most people can agree make for a good engine, even if they can't agree on, which is the most important. The things commonly included:

The Coyote engine does well in some of these areas, less well in others.

How Much Horsepower Does The Coyote Produce?

As discussed in detail above, the Coyote ranges in power between 360 and 480 horsepower, with the most powerful versions appearing in the Mustang GT. This compares well with the LT1 now used in the Camaro and the Hemi in the Charger, and the Coyote does so with fewer cubic inches to work with.

How Much Torque Does The Coyote Have?

Torque is another area where the Coyote matches well with the competition, coming in between 380 lb-ft and 420 lb-ft of torque.

What Kind Of Fuel Efficiency Does The Coyote Have?

The Coyote is not great for fuel efficiency, at least compared to all cars as a whole. It does about as well as the competing performance engines but gets only around 18mpg in both the Mustang and F-150.

How Much Does A Coyote Engine Cost?

This is harder to figure out, mostly because there are so many things that go into a car's cost. The price Ford lists for the Mustang that comes with the Coyote vs. their Ecoboost varies between $4,000 and $10,000 more for the Coyote, but you also get other options, not just the engine.

How Often Do Coyote Engines Break?

This is not an old engine design, but it has been around long enough for reliability issues to pop up. Surprisingly, there aren't many. There have been complaints about such things as leaky gaskets, which Ford addressed in later revisions. Overall, it seems to be a very reliable engine. One of the comments you commonly find is that it seems overbuilt. When it comes to reliability, that is a good thing.

How Long Do Coyote Engines Last?

An engine can be reliable but have a shorter lifespan than other engines available. This can be because of the excessive wear caused by engine design.

The Coyote does not seem to have any problems in this area. Many owners of F-150s, and even some Mustang owners, have put over 100,000 miles on their vehicle with no signs of significant wear. There are a lot of reports of 200,000 miles and more. If well maintained, the Coyote seems to be a very reliable engine.

How Much Does A Coyote Swap Cost?

The engine has been around long enough that you may find a used Coyote in the junkyard. Even if you find one there, you'll still likely need to get a new PCM and harness. The Coyote is different than many of Ford's engines, and it uses a returnless fuel system, which makes using the factory PCM difficult. But the retrofit PCM from Ford Racing Performance Parts takes care of that issue.

Depending on your engine and transmission combo, you may be able to use one of these:

Be careful when retrofitting a Coyote into an older Mustang or other vehicles that weren't designed for these engines. The Coyote is very different than earlier 5.0L engines, and it is wider. It may not fit between your front suspension parts, like the shock towers.

Which Ford Engine Is Best?

When you discuss what Ford engine is best, there are a lot of options to consider. For simplicity, we will discuss only those available on the F-150 and Mustang since those are the vehicles we have discussed above.

Here are the specifications of available engines:

Based on these figures, the best motor for horsepower and torque is the Coyote in the Mustang, the 3.5L High-Output Ecoboost in the F-150. If Fuel efficiency is more important to you, the 2.3L Ecoboost is the best option in the Mustang, with the 3.0L Turbo Diesel the best for the F-150.

You can make strong arguments for both the Coyote and the 3.5L High-Output Ecoboost for the best engine overall. While the other engines have better fuel efficiency, many will find that it isn't enough of an increase to make up for the far lower horsepower and torque.

But those aren't the only important factors when considering what makes for a good engine; its reliability is important. Both the Coyote and the 3.5L High-Output Ecoboost have good reputations, so that you won't have any issues there.

Both the Coyote and the 3.5L Ecoboost have appeared on best engine lists over the years. You can't go wrong with either engine.

How Long Is An ATV?

9 Toyota Camry Floor Mats That Could Protect Your Car

Is The Honda Accord AWD?