Ford has always been known for creating so many different and quality Ford Mustang models, though it can't be denied that certain efforts are more successful than others. Based on engine, choice of the fastback, and convertible body style, there are around 13 unique Mustang variants for car shoppers to choose from. With that being said, you may still wonder what Ford Mustang has the most horsepower? We've done the research for you in this post.

The all-new 2020 Mustang Shelby GT500 is Ford's most powerful production car ever. The Shelby GT500 was unveiled at the Detroit Auto Show back in 2019 and is powered by a supercharged 5.2-liter V-8 engine, which delivers a staggering 760 horsepower and 625 pound-feet of torque. With these performance figures, it's hard to argue against the fact that the Shelby GT500 combines modern sportscar performance with an iconic muscle-car presence.

That is some serious power from the GT 500! One thing nice about the Ford Mustang is that it comes in various engine sizes for both the economical and adrenaline junky in mind. However, this post isn't about getting better gas mileage. This post is about going fast in American muscle! Read on as we discuss more on the Ford Mustang Shelby GT500 and its specs. 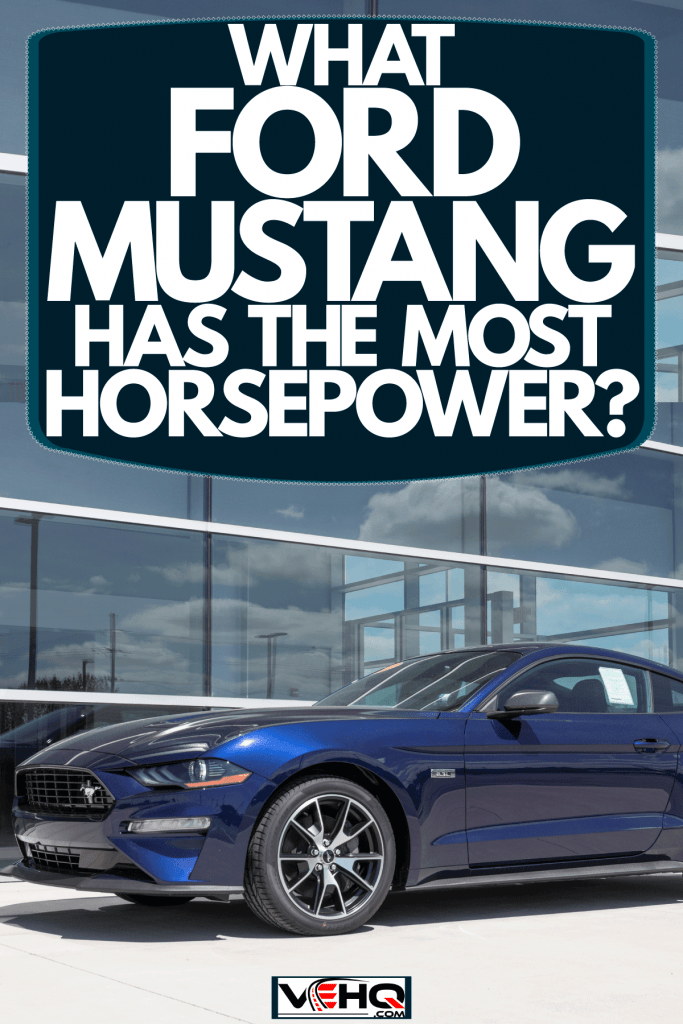 The Ford Mustang GT500 is the most powerful street-legal Ford ever built. It's a car that can sprint from zero to 60 miles per hour in just 3.5 seconds, achieve a quarter-mile time in less than 11 seconds, and hit a top speed of over 130 miles per hour in 10.7 seconds! In addition, it has TREMEC 7-speed automatic transmission, which Ford claims shifts in just 100 milliseconds.

This gearbox also boosts several drive modes, including normal, sport, drag, weather, and track. While the 2020 Mustang Shelby GT500's engine is the most powerful in terms of horsepower, the car comes with numerous features. Read on as we break down everything you ever wanted to know about this fastest and most powerful street-legal vehicle ever built by Ford.

The body of the latest GT500 has undergone a full redesign to look better than ever. The rear spoiler, rear diffuser, vented carbon-fiber hood, new rear and front springs, anti-roll bars, and the conspicuous Shelby cobra logo give the GT500 a distinct look reminiscent of the Carol Shelby legacy.

These tires offer a significant advantage in cornering grip, according to Ford. Inside, the car features leather-trimmed Miko Suede Sport Seats, a 6-way driver's seat with power adjustable lumbar, and the 50/50 split-bench folding rear seats.

When it comes to entertainment and infotainment systems, standard features include a 9-speaker sound system plus an amplifier, the Bang and Olufsen sound system with 12 speakers, a Wi-Fi hotspot, Bluetooth connectivity, Apple CarPlay, and Android Auto.

In addition, the American muscle car has a pair of USB ports, a subwoofer, and a CD player. The car's trunk is exactly 14 cubic feet in cargo space, which is about five cubic feet larger than the Chevrolet Camaro ZL1 and two cubic feet smaller than the Dodge Challenger SRT Hellcat.

The car also boasts a five-star rating and score of "Good" from the NHTSA and IIHS, respectively. It's because of these impressive specs that the Shelby GT500 sits at the pinnacle of American muscle cars, alongside the Chevrolet Camaro ZL1, which offers up to 650 horsepower, and the Dodge Challenger SRT Hellcat Redeye that offers 797 horsepower.

What Is The Biggest Ford Mustang Engine?

The biggest Mustang engine ever installed into a Ford production car lurks behind the all-new 2020 Mustang Shelby GT500. The aluminum alloy block 5.8-liter V8 engine is hand-built and features a 2.3-liter supercharger with an air-to-liquid intercooler, all of which are tucked into the engine's valley.

These features a patented active baffle system to keep the oil in place. With 14 psi of boost, this formidable supercharged engine can churn out 760 horsepower and develop 625 pound-feet of torque.

How Heavy Is A Ford Mustang Engine?

Ford's traditional Fox-Body 5.0L engine weighs about 411 pounds. This is a dry weight or weight without accessories such as smog, A/C, alternator, power steering, flywheel, and more.

As per the Ford Racing Parts catalog, the Coyote engine weighs around 444 pounds (excluding accessories), whereas the weight of the old 5.0 engine ranges between 411 and 460 pounds. The Shelby GT500's overall weight is 4200 pounds.

What Mustangs Have A V8?

All Ford Mustangs with the GT moniker have got a V8 engine. GT denotes "Gran Turismo," and it represents the beginning of the V8 power – one of the best performance values you can find in sports cars or vehicles designed with comfort and speed in mind.

What Mustangs Have The Voodoo Engine?

What Is The Fastest Ford Engine?

The fastest Ford engine is the 5.2-liter Ti-VCT V8 engine found under the hood of the 2020 Ford Mustang Shelby GT500. As previously mentioned, the engine gives the quickest acceleration and highest horsepower numbers ever offered on a street-legal Ford Mustang.

In addition, it delivers a whopping 760 horsepower and 625-lb-ft of torque, thanks to the car's seven-speed automatic transmission that the automaker claims shift faster than any manual gearbox.

Conclusion: Is The Shelby GT500 Worth It?

Does A Ford Mustang Ecoboost Have A Turbo?

Have a Ford Mustang Shelby GT500, or looking to buy one? Leave us a comment below!