Having a truck with a diesel engine has some serious perks. Diesel engines last a lot longer than their standard gasoline counterparts, are quieter, run more efficiently, and get better fuel economy. If you are looking at Ford model trucks and want to know which ones are built with diesel engines, we can help you narrow down your search. We researched Ford trucks from multiple professional sources, so you'll know for sure which model pickups to consider.

The current model year Ford trucks include five that have diesel engines as an option. For 2022, these models are:

Now that we know which Ford trucks have diesel engines, we'll take a closer look at each model. You might also be curious which diesel engine from Ford is the most reliable or who manufactures the engine for Ford. What power strokes should be avoided when buying a Ford with a diesel engine? Are diesel engines expensive to maintain? For the answers to these questions and more, read ahead in this post to see what our research has uncovered. 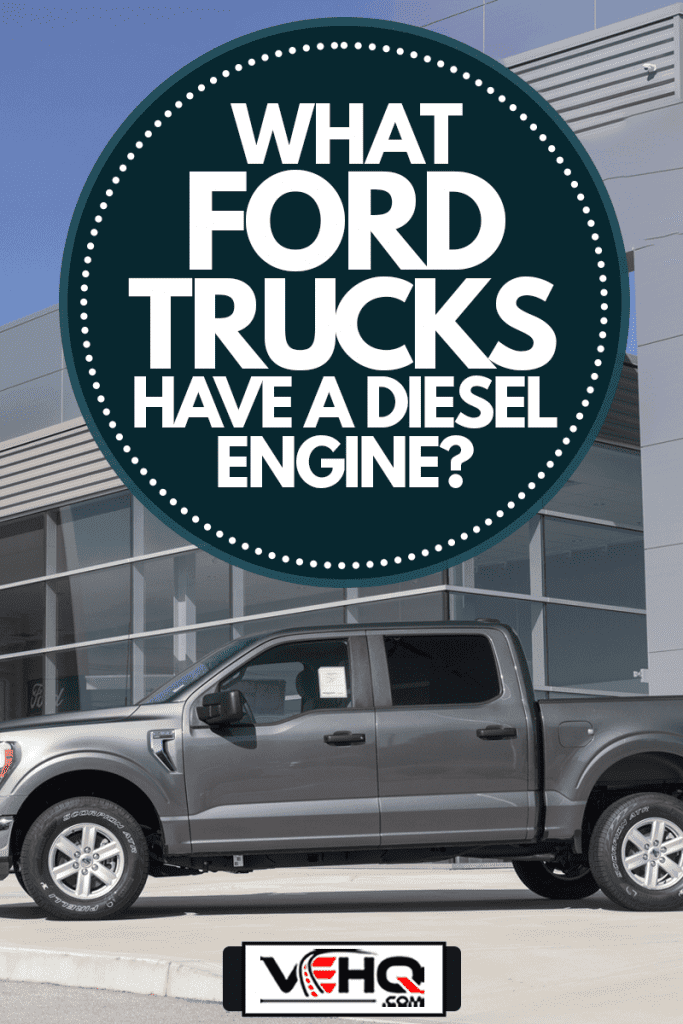 Ford trucks with diesel engines under their hoods

Ford Motor Company manufactures five different model pickup trucks that have diesel engines. In most cases, a diesel engine is an option you can upgrade to, as the standard engine the trucks are equipped with are gasoline. Let's look at each of the models that can be bought with a diesel engine under the hood.

The F-150 XLT diesel engine is a 3.0 Powerstroke V6. It boasts 250 horsepower and 440 foot-pounds of torque. This trim level of the F-150 has three cab configurations and two different bed lengths to choose from. The comfortable and roomy interior can carry up to six passengers, depending upon the cab you select.

This trim level of the F-150 has the same engine under its hood as its XLT counterpart. The interior features stand out in this version of the pickup truck. The dual-zone temperature control works in tandem with seats that are both heated and ventilated. The Lariat is an optimal comfort ride, capable of carrying up to six riders.

The Platinum has a 10-speed automatic transmission powered by the same 3.0 Powerstroke V6 as the other F-150s above. The unique wood-trimmed interior and optional max recline seats make for an optimal riding experience. The infotainment system is enhanced in this trim level as well. This trim level is manufactured with bucket seats in the front and has a maximum rider capacity of five.

The onboard features of the King Ranch trim level include a ten-speaker sound system paired with Sirius satellite radio. An onboard voice-activated navigation system is also included. 18-inch machined aluminum wheels and LED fog lamps are great additions to the exterior features. The King Ranch will seat five riders.

The Super Duty line of Ford trucks are the heavy-duty models used for hauling the heaviest loads. The F-250, F-350, and F-450 diesels are equipped with the 6.7L Power Stroke V8 Turbo Diesel engine. These machines have 475 horsepower and are capable of 1,050 foot-pounds of torque.

The interior features will vary based on the trim level you select. Depending on the model Super Duty, you may be able to get it in the XL, XLT, Platinum, King Ranch, Limited, or Lariat.

What is Ford's most reliable diesel engine?

Ford Truck Enthusiasts rates Ford's 6.7L Power Stroke V8 as the most powerful and reliable diesel engine to date from this auto manufacturer. This engine is rated at 475 horsepower and is capable of 1,050 foot-pounds of torque. It also features an integrated exhaust brake and a trailer brake controller.

Before emissions control standards, the 7.3L Powerstroke was considered to be the best Ford diesel engine. The 2000 model years are considered the most highly rated. Tighter emissions regulations forced Ford to stop producing this engine in 2003. 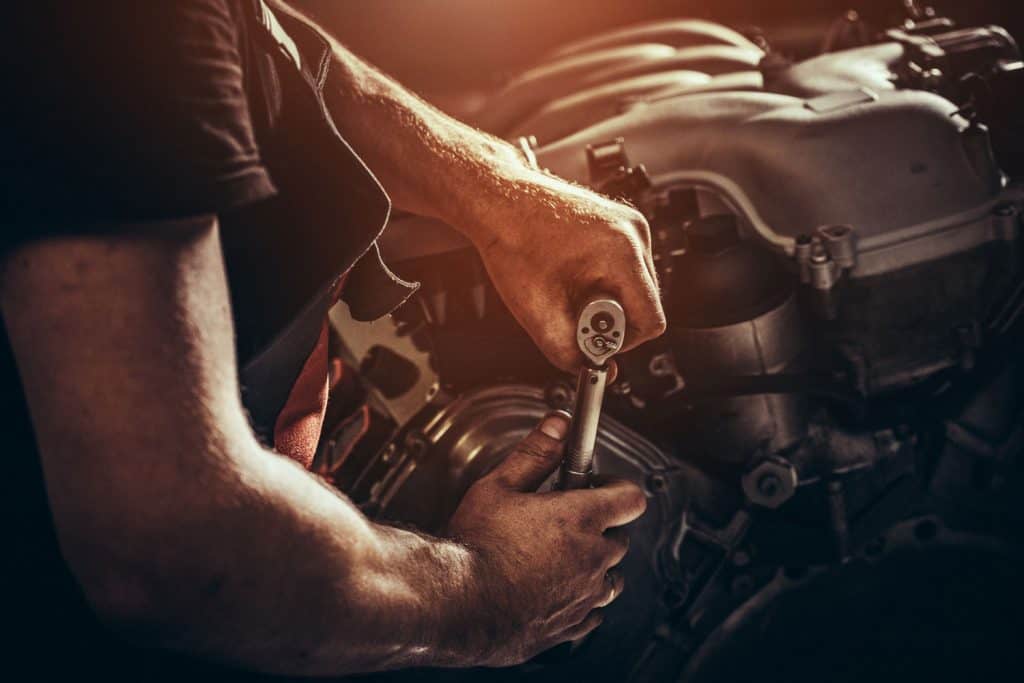 Who makes the diesel engine for Ford?

Since 2011, Ford Motor Company has designed and manufactured its 6.7L Power Stroke V8 diesel engines. They are manufactured at Ford plants in Alabama and Illinois, with the Ford plant in Ohio fabricating the automatic transmission versions of this engine.

Why did Ford discontinue the F-150 diesel?

In July of 2021, Ford Motor Company announced that it would no longer produce the F-150 with the diesel engine option. This decision, according to Car and Driver, was made after looking over sales data. The Ford F-150 buyers were gravitating toward the Ford Power Boost Hybrid engine.

The F-150 began to offer consumers the option for a diesel engine, starting with the 2018 models. After a 15-year hiatus, Ford stopped putting diesel engines into their trucks manufactured in the United States. Stricter emissions standards by the government caused Ford to halt production of this engine until they could produce a newer model that met the new regulations.

What Powerstroke to avoid?

The Ford diesel engines designed and manufactured by this popular automaker have proven to be tough and reliable. But there have been several issues with the 6.7L Power Stroke V8 engine. These issues stretched over several model years.

The model years from 2011 to 2014 are the ones consumers reported the most issues with. These engines were known to have experienced turbo failure. There were also substantial problems with the emissions system within these years.

You might think that the diesel engine would cost more to maintain. These engines are more reliable and can last two to three times longer than their gasoline-powered counterparts.

However, diesel engines have overall lower maintenance costs. While the cost of an oil change might be higher than one in a gasoline-powered truck, you won't need to change this fluid as often in one that is fueled by diesel. Diesel engines also do not have spark plugs, which results in substantial savings over time.

The powerful diesel engines will experience a lot less wear over time. This results in fewer trips to the shop. And while you will pay more for parts and labor for your diesel engine, the frequency of visits to the mechanic will be fewer.

For the best results, consult your owner's manual and follow all the maintenance and inspection guidelines they recommend. The better you treat and maintain your diesel engine, the longer it will last and the less it will cost you to keep on the road. 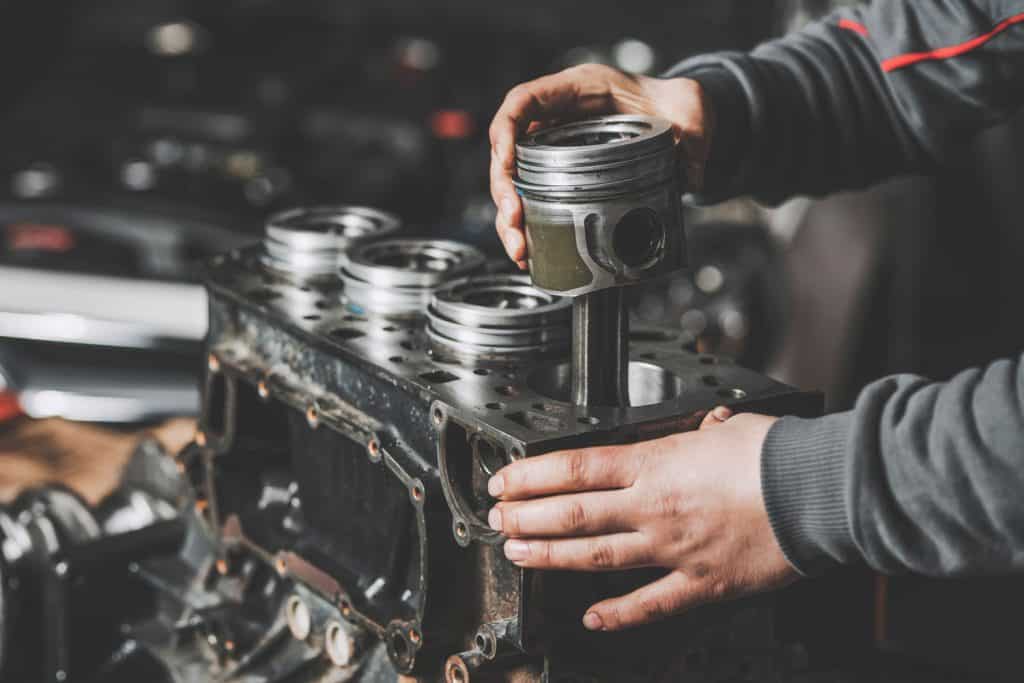 Diesel engines have been a great addition to the latest generations of Ford pickup trucks. These durable and fuel-efficient machines have been a popular choice among Ford owners, as they last longer and require less to maintain. While the Ford Ecoboost Hybrid engine has replaced the diesel option in the Ford F-150, the diesel is still high in demand among Super Duty drivers.

Take care of your Ford diesel engine, and you can expect it to be on the road for a long time. Drive safe!

If you enjoyed reading this post on Ford trucks, we believe you'll find the following posts about Ford vehicles helpful:

Does The Ford Bronco Roof Come Off? [With Instructions On How-To]

How Much Can You Tow With a Ford Ranger? [With or without a towing package]