We've heard stories of people accidentally putting water in the oil compartment of their vehicles. We've also gotten questions about what happens when water gets mixed up with your engine oil. Let's address this issue with the help from car experts.

Water is considered a contaminant to your engine oil and will affect its performance. Once contaminated, the motor oil won't be able to lubricate moving parts of the engine efficiently. This could lead to serious engine problems, such as broken piston rings, damaged combustion chamber  and cylinder head valves.

Continue reading so we can explain further what will happen to your car when water gets in your motor oil. We'll also tell you how you will know if this has happened to your engine, if water will naturally evaporate, and what you should do when there's water in your oil. Let's start! 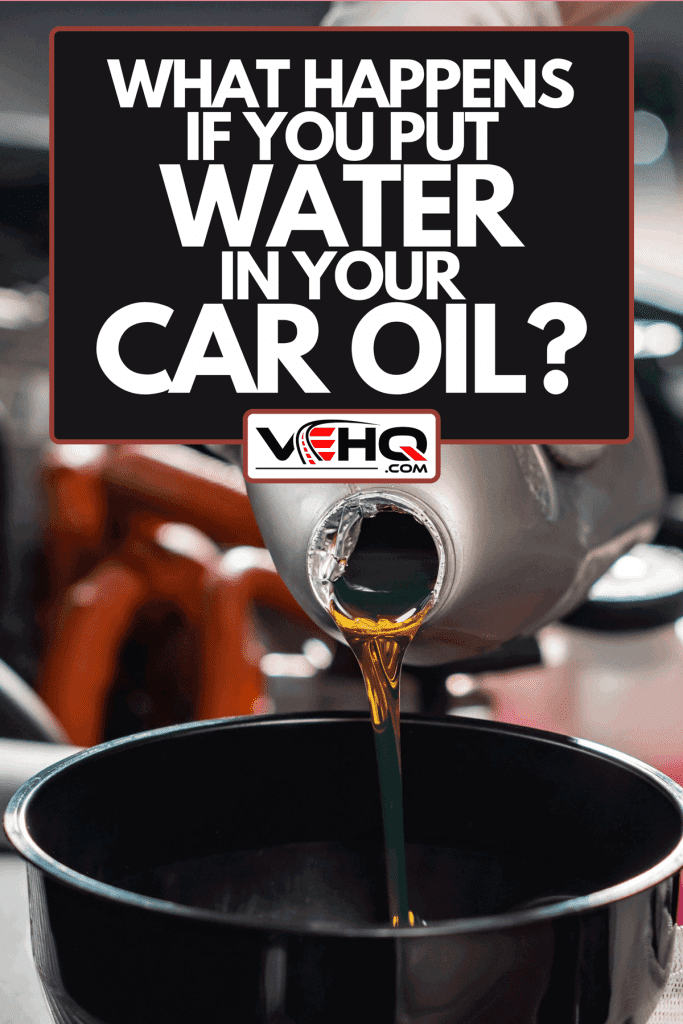 What happens when water mixes with oil in the engine?

Motor oil is responsible for lubricating the moving parts of your car's engine. It reduces the friction between the contacting surfaces so that they can function effectively without damaging each other. This way, these components won't be prone to premature wear and tear.

However, when oil is mixed with contaminants, they affect its performance. Water, no matter how clean it is, is considered one of those substances that can contaminate your engine oil.

Oil and water do not mix well. Their molecules repel each other. That is why we put oil and water in separate compartments in our car's engine.

Water, which is denser, sinks to the bottom of the container while oil, which is less dense, floats on top. When this happens, the motor oil will be denatured.

It won't be able to effectively do its job to protect the moving parts of the engine, which could lead to serious damage. The problems that can arise in this situation are damages in the piston rings, combustion chamber, cylinder head valves, among others.

Water isn't supposed to be inside the oil port, right? There could be issues with compression because the water has nowhere else to go. This would cause the piston rods to break eventually. They could cause a hole in the engine. When this happens, you will lose oil, and the engine will stop running.

That's why it's important never to mix water with your engine oil to avoid engine troubles. 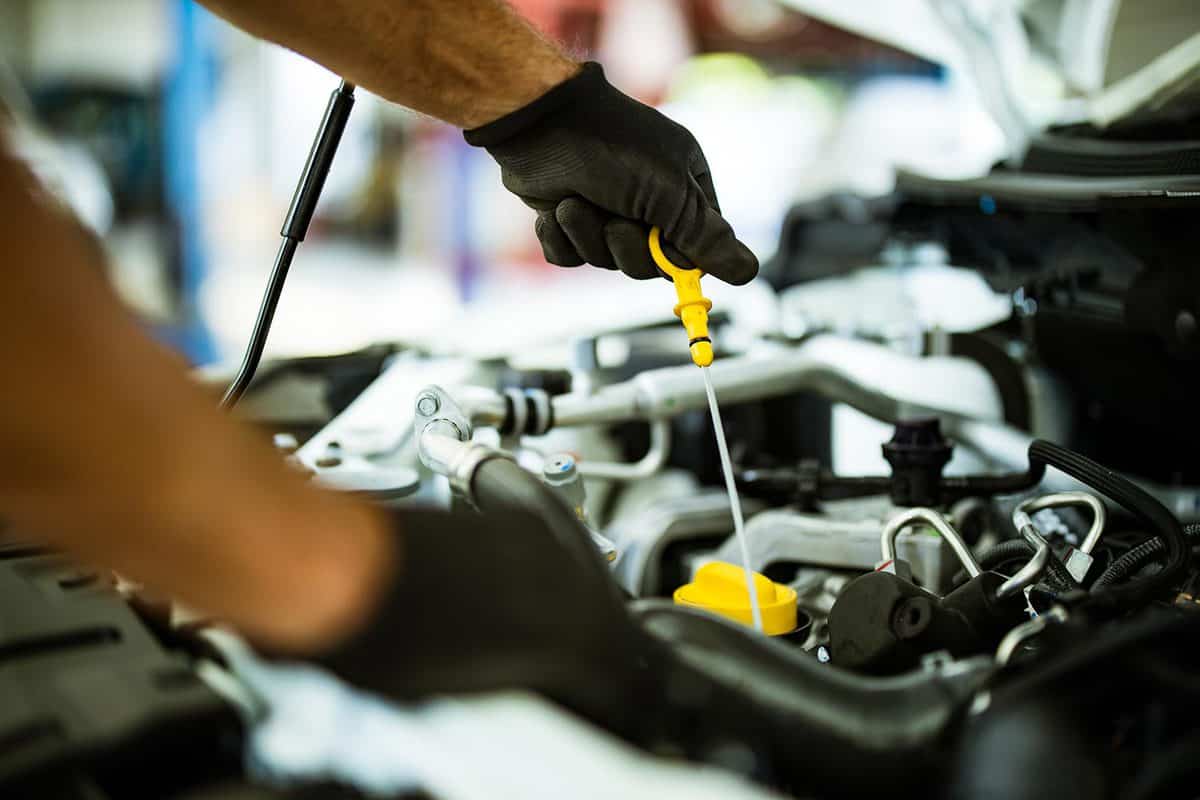 How does water get into motor oil?

There are different ways that water can get into your car's oil compartment.

What do I do if I put water in my oil?

When there's water in the oil port of your engine, you need to address this issue ASAP before it causes further damage to your car. As mentioned above, you need motor oil to lubricate the moving components of your car's engine.

Without it, they will grind with each other and destroy the engine in no time. Your car will stop working, and worse, you would need to have your engine replaced altogether.

It isn't advisable that you use your car when you know that the oil has been mixed with water. Call your trusted mechanic right away to have your car serviced.

The oil and water need to be fully drained. Then they will put in new engine oil. The filter should also be replaced. If there are cracks or a faulty gasket, it should also be fixed to stop the leaks.

This should help clear all the excess water in the system. But experts also advise that you have your oil and filter changed again after reaching 500 miles to be on the safe side.

How much water in oil is bad? 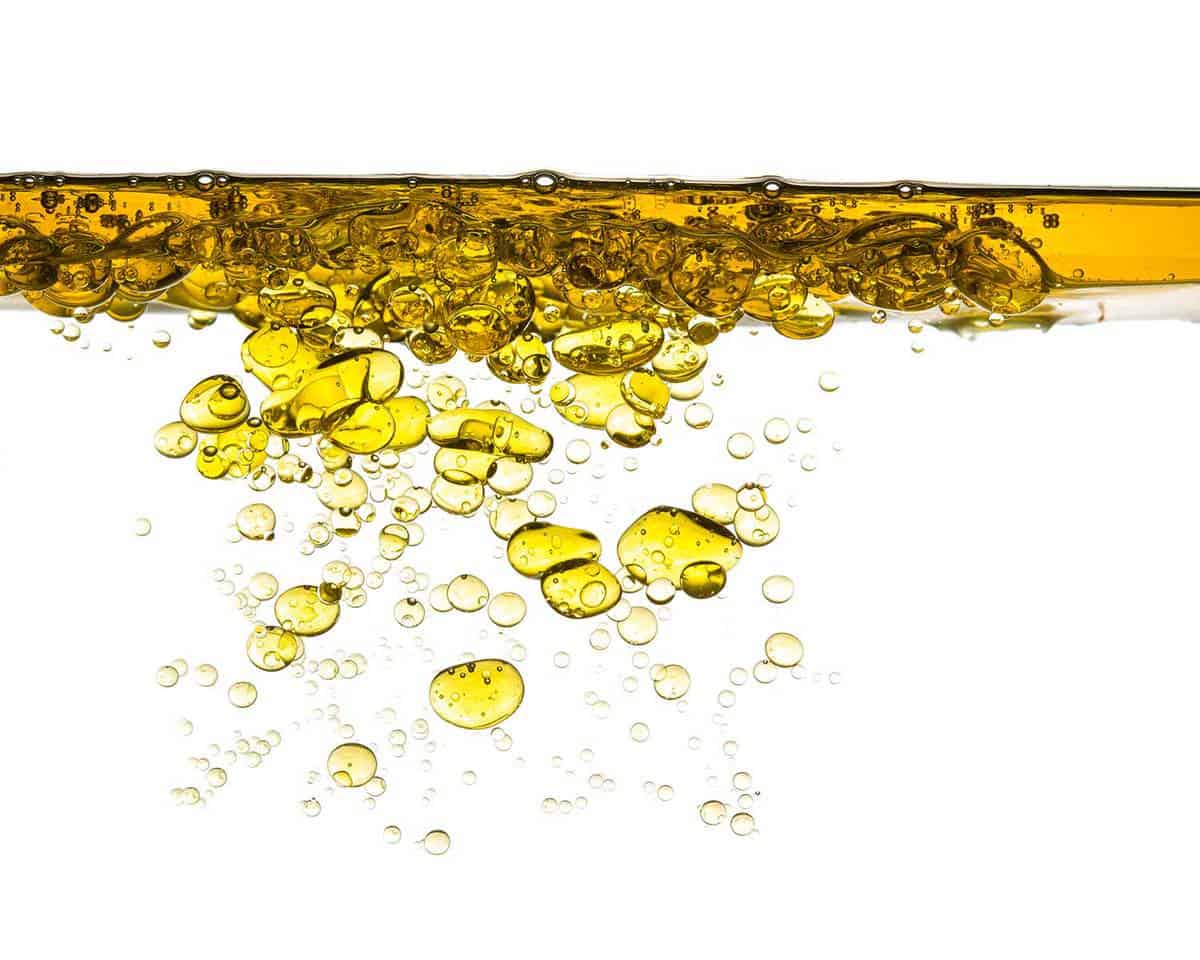 As mentioned previously, water can contaminate the engine oil. These are negligible if we're just talking about droplets that form during condensation. However, it can be bad when someone accidentally pours a substantial amount of water in your oil port.

Only a certain amount of water can be tolerated by oil. When kept within this level, the oil will be able to dissolve the water molecules. However, when the water level exceeds the maximum point, the oil will be saturated, denatured, or what we call contaminated.

This is when you will see the separation of oil and water. Experts refer to this as cloudy, milky, or hazy oil.

While we can't say, exactly how much is too much, if the amount of water in the engine oil causes it to become hazy, then you know for sure that it's bad for your engine.

Besides, water and oil shouldn't mix in the first place. There is a reason why we put them in separate ports in our vehicle's engines. This is to reduce the likelihood that you will mix them with other fluids, substances, and particles that can interfere with their function in your car's engine.

How do you know if you got water in your engine? 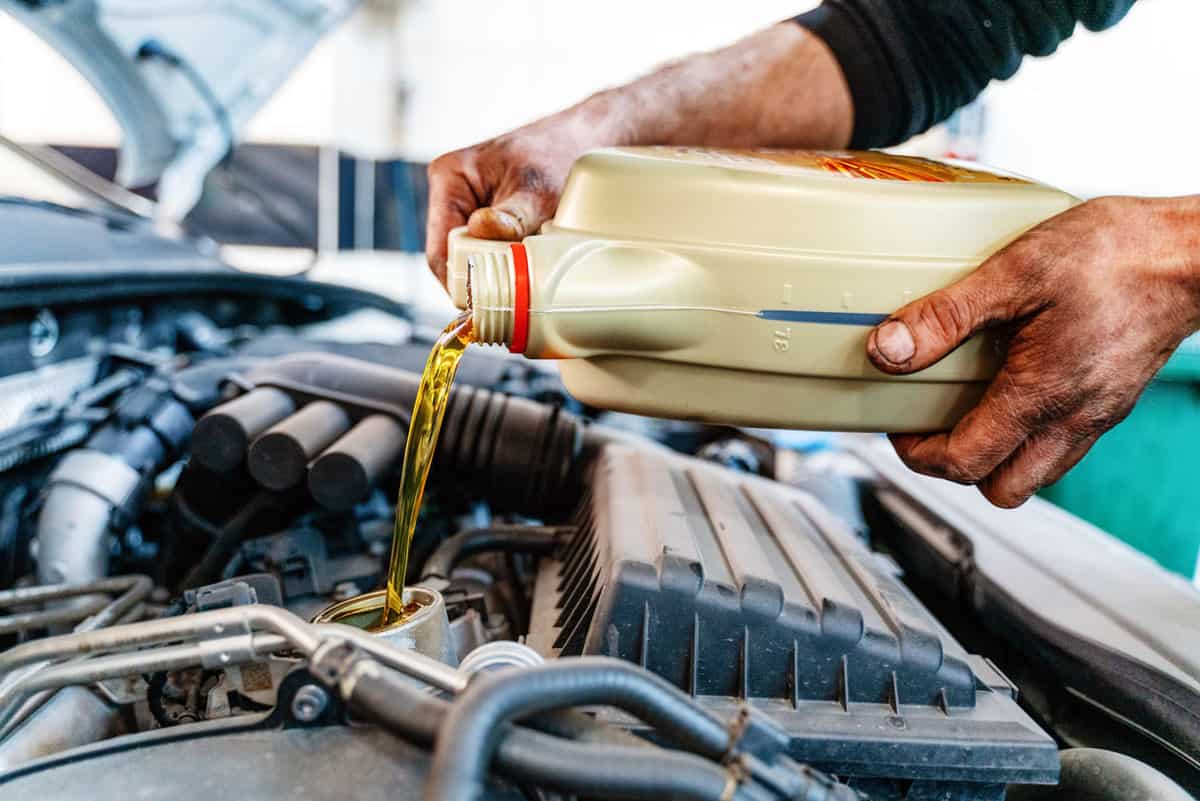 There are two easy ways for you to determine if there's water in your engine oil. These are through using a dipstick and collecting a sample of the engine oil.

Put the dipstick in the oil port of your engine and pull it out after a few seconds. Telltale signs that there's water in your oil are forming air bubbles on the dipstick or seeing a brownish residue over the oil level. You might also notice that the oil residue is thick and milky.

A sampling of the oil

Get a bucket or container. Open the plug that covers the oil pan and get a small engine oil sample. If you remember your science lessons, you would know that water would sink at the bottom of the sump because it is denser than oil. When the sample shows a milky or hazy color, you know that water has been mixed with your engine oil.

These are just some of the methods that you can do when you suspect that there's water in your oil. Once you've confirmed this, act promptly to resolve the issue to avoid having problems with your car's engine.

Will water in engine oil evaporate? 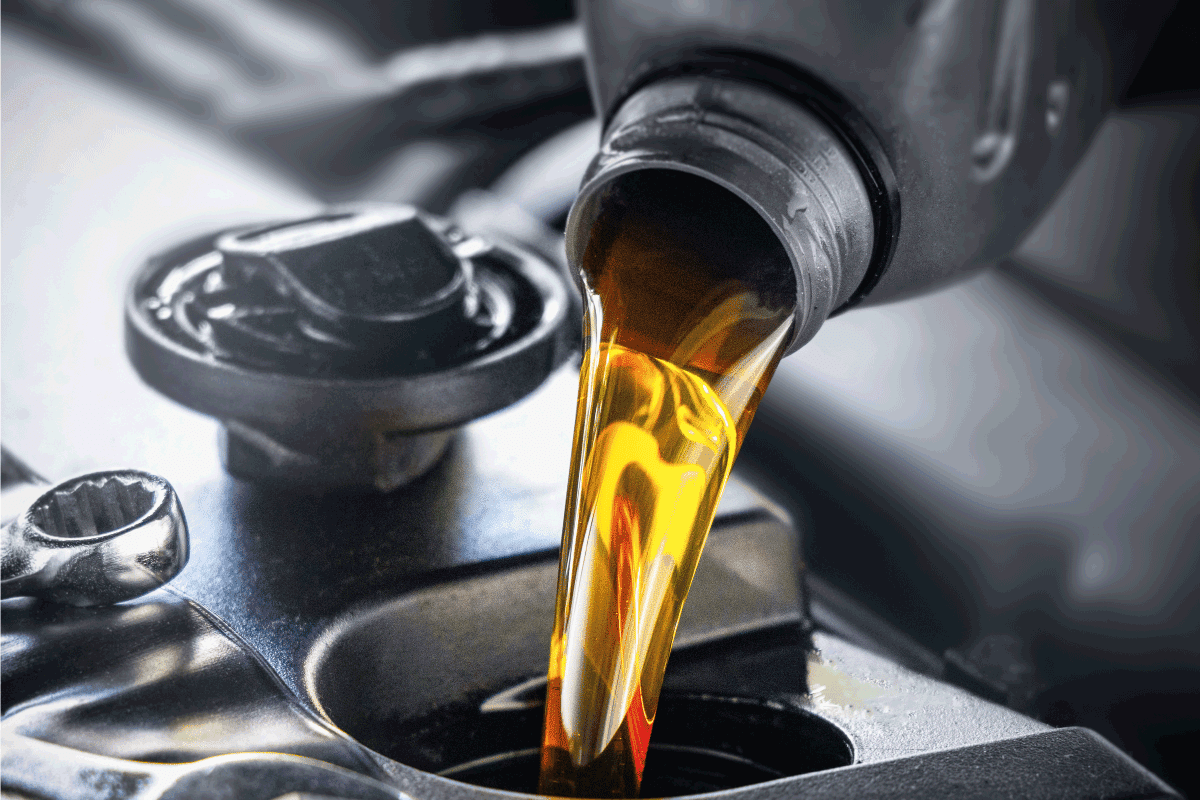 As previously mentioned, water droplets formed during condensation will naturally evaporate as you run your car. However, when we're talking about a substantial amount of water, then no, it won't evaporate.

Don't be complacent thinking that water will evaporate due to the high temperature in your car's engine. Water won't even be dissolved in oil, causing it to become contaminated. That's why you would need to have your oil drained thoroughly to get rid of this contamination.

Water and oil shouldn't mix. Water will contaminate your engine oil and affect its performance, especially in lubricating the moving parts of your car's engine. When you suspect that water has been mixed with your engine oil, have the contaminated oil drained and changed, replace the filter as well to avoid engine problems.

For more related reading, you may visit the following links:

Why Is My Car Burning Oil and What to To About it?

Why Do Cars Need Oil? [and What Happens If You Don’t Change Oil]