Cruising in your pickup truck means all the windows down, so why not let some sun in too? A sunroof can be a great feature, but which pickup trucks have them? We've taken the time to research current truck models to find out for you!

The term sunroof is often interchangeable with the term moonroof, but both are in the same family. Sunroofs aren't seen as often in current models of trucks, while moonroofs are becoming a wanted specification. Below is a list of the latest trucks, mid-sized and full-sized, that have the sunroof option available:

This is a nice and hefty-sized list for those of you looking for the sunroof option. In recent years, trucks have become more customizable to cater to your specific needs if the feature isn't already standard. Keep reading to find out what sets each of these trucks apart, and more! 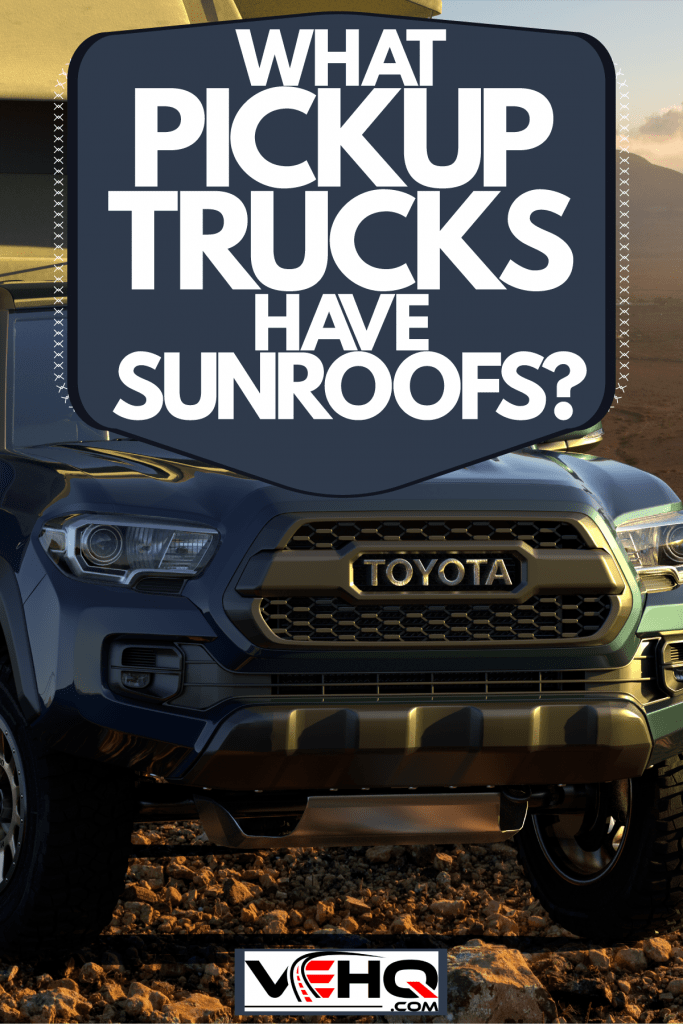 A standard feature, the Honda Ridgeline moonroof is power-operated. Another powered feature is the rear window. It comes with a leather interior, heated seats, and even heated side mirrors.

Consider the 'E' an extra step up in terms of comfort and technology, compared to the RTL trim level. It comes with the powered moonroof and a premium audio system, USB hookups, and a wireless phone charger.

Take a drive in first class. In addition to the moonroof, you'll be driving with alloy wheels and red interior lighting. As the model level states, the Black Edition comes with black leather seats and black exterior trim.

Available for the double cab models, a power moonroof can be added to TDR Off-road with an optional package. Being an off-road vehicle, it comes standard with Multi-Terrain select, CRAWL control, and daytime running lights.

On both double cab options, the moonroof comes standard. Safety comes well prepped on the Limited. The features include the Toyota Safety Sense, advanced front airbags, and a blind spot monitor, to name a few.

The TDR PRO only comes in double cab as either a manual or automatic. The moonroof is a standard on both and has a sliding cover to give you shade when it's not in use.

True front-row power sunroofs are an add-on option with the Chevy Silverado 1500 crew cabs. These trucks come equipped with spare tires and LED lights in the truck bed, plus cargo tie-downs.

Sunroofs seem to only be an exterior feature for the 3500 HD; it will slide sleekly into the roof as it opens over the first row. To add this sunroof, you'll be putting down roughly $1K extra on the crew cab standard bed models.

Coming in hot are the F-150 trim levels, the XLT, LARIAT, KING RANCH, PLATINUM, and LIMITED. Out of the five, only one comes standard with a sunroof, and that's the Limited. The other four, however, do give you the option to add it into your deal.

The sunroof is specifically for the super crew cab, which is the larger F-150 on the market. Having four doors, you'll be able to fit six people with enough legroom for everyone. Plus, having the sunroof will help keep it from feeling cramped if you have the whole family along for the ride.

Moving through the Ford lineup to the Super Duty series, let's start with the F-250. The F-250 has six trim levels, and three offer sunroofs. Out of those, there is just one, the Limited, which includes a sunroof. The other two, the King Ranch and Platinum, have sunroof packages within reach with packages around $1,500.

Since the Super Duty trucks have so much more room in the four-door crew cab, you'll be getting a front and back row sunroof benefit. Super Duty Fords stand apart with their top-of-the-line suspension. You won't be getting the run-of-the-mill baseline mechanics on these trucks. This means you'll be able to haul more and take on extensive projects.

The next step up is the Super Duty F-350. Once again, the Limited is the one truck to have a standard sunroof, while the packages for the King Ranch and Platinum will cost that $1,500. However, each of these crew cab models does have the bonus of a standard powered rear window slider.

The F-350 is a middle ground for the Super Duty's towing capacities. Due to the larger rear block on the F-350, it has a more stable gut and surpasses the 250s rear spring. You can find these in gas and diesel engines, that come with tire pressure monitoring, trailer sway control, and rearview cameras.

Finally, the big boss of the Super Duty selection, the F-450. Out of the six models, the XL is the trim that does not include sunroof options. You'll want to look at the XLT, LARIAT, KING RANCH, PLATINUM, and LIMITED models. Keeping on track with the previous Fords, the Limited F-450 is the stand alone to come with a double panel sunroof standard. The rest will be the double panel for $1,500 from the packages offered.

With an eight-foot bed crew cab body, it is similar in width to the F-350, and it has the best towing capacities out of the three Supers. The F-450's gooseneck trailer hitch lets you pull all your toys around on the weekend and then larger work machinery during the week. Cruising in this truck with the front and back sunroof panels tilted open will give you the feeling of driving a tank.

Can I put a sunroof in my truck?

If your car didn't come manufactured with a sunroof, it is best to leave it that way. It is possible to add a sunroof to your truck, but it has a few downsides. The first being that you'll lose some headspace. This is due to the cab not being designed with the extra wiring in mind, so it drops down into the truck.

The second is the risk of water leakage. When a truck is built with a sunroof, it is specifically sealed to the manufacturer's standard. Aftermarket sunroofs will not have the same industrial-strength sealing or water drainage paths. If improperly installed, you could have water getting into your truck when it rains or while washing it.

There is no definitive proof that sunroofs affect performance. The one thing consumers are concerned about with sunroofs is how the added weight might lower gas milage. As long as your tire tread isn't worn and regular maintenance is done, the side effects are close to none. Also, unless you use your truck specifically for racing, there is very little wind disturbance created from the feature.

What is the difference between a sunroof and a moonroof?

The terms sunroof and moonroof are often used interchangeably because a moonroof is a type of sunroof. Both were very popular on mid-2000 vehicles but have seen a decline in recent years. Either is an added feature to a truck to allow light and fresh air into the cab; it can be a useful option when the rear window is fixed in place.

Looking back on earlier sunroofs, they were often blended into the truck's interior design and only came off as a whole versus sliding back. Sunroofs of this sort were made from plastic or part of the ceiling of the cab. The main difference is that sunroofs are opaque, cannot fully be seen through when closed, and fully come off.

On the other hand, a moonroof is a transparent window made from glass that can slide and tilt but is not removable. Moonroofs are what you'll most often see on newer models of trucks, in addition to the cab's rear window slider. The glass is typically coated in tint and UV protectant film.

In addition, there is also a panoramic sunroof. Panoramic means to give a wide view. So with a panoramic sunroof, you'll be able to have a sweeping view of your surroundings. Unlike the other roofs, this one can span the length of your vehicle. While this option doesn't count for trucks, you can find it on midsized SUVs.

Can you get tan through a sunroof?

Getting a tan through a removable sunroof is possible because there is no barrier to stop the sun. However, there really is no chance of a tan with the sunroof closed since the panel is opaque. On the other hand, moonroofs are usually tinted or made with a UV protectant film to ensure you don't get affected by the sun when it's uncovered. Unless you're leaving your arm in a sunspot for hours on end, you won't be able to get a tan.

Sunroof or moonroof, either term refers to a movable panel on your pick-up truck's roof. On modern-day cars, they are called moonroofs since they tilt and slide back but do not fully detach as early sunroofs did. No need to fret, there are plenty of packages being sold where you can customize your truck with a sunroof. If your already owned truck doesn't have a sunroof, it would be best to skip the project of adding on to keep your interior dry.

Become prepared to car shop with these related articles

7 Types Of Pickup Trucks You Should Know

Types Of Truck Cabs Guide: Which Is The Perfect Choice For You?