If you purchased a vehicle with a diesel engine after 2002, you probably have a diesel exhaust fluid (DEF) tank. Should you need to know when to add DEF and how it's done, we can help you. We researched this process in detail so that you'll know for sure how it works.

No matter what type of diesel engine you have under your hood, DEF should be added as soon as possible after the low fluid indicator light appears on your dashboard. Adding DEF to your vehicle is a simple process that requires finding the DEF tank and using a funnel to assist in filling it.

Now that we know when and how to change DEF, we'll take a closer look at how this fluid works. You might also be curious about what might happen if you put diesel fuel in your DEF tank, or what happens when you run low on DEF. For the answers to these questions and more, read ahead in this post to see what our research has uncovered. 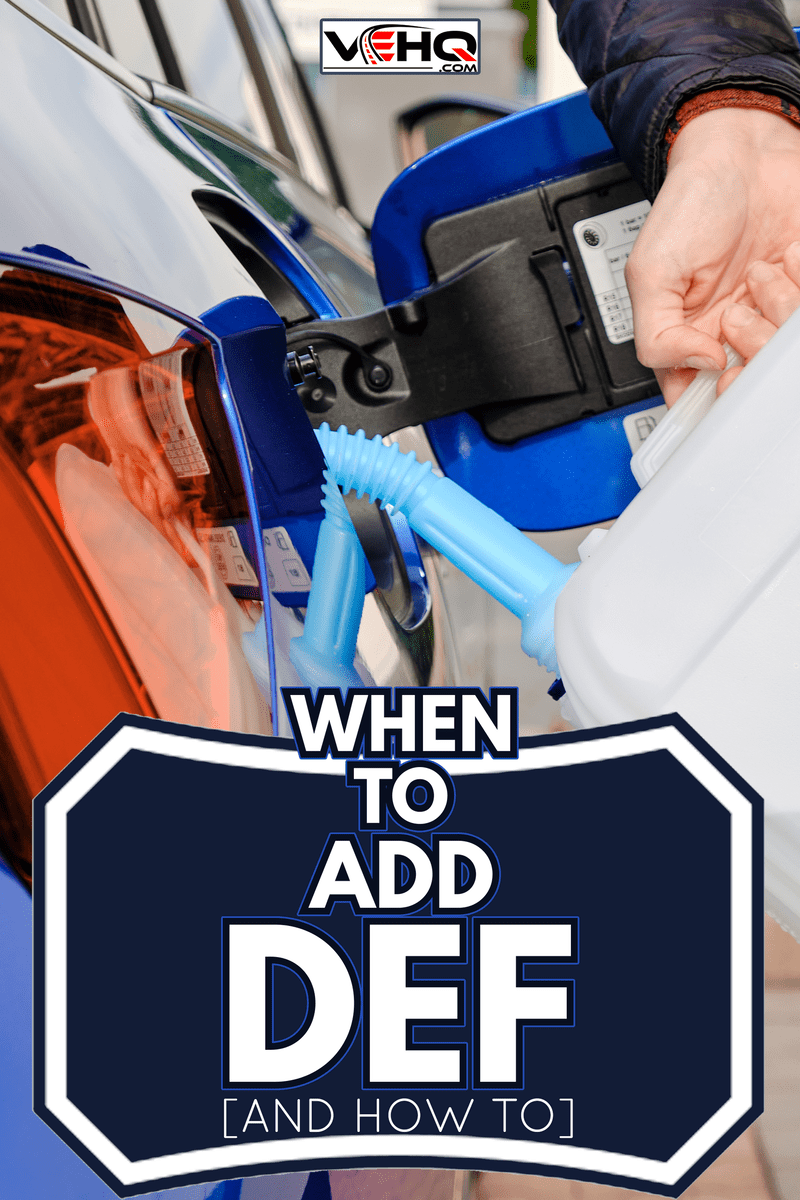 Adding DEF To Your Vehicle 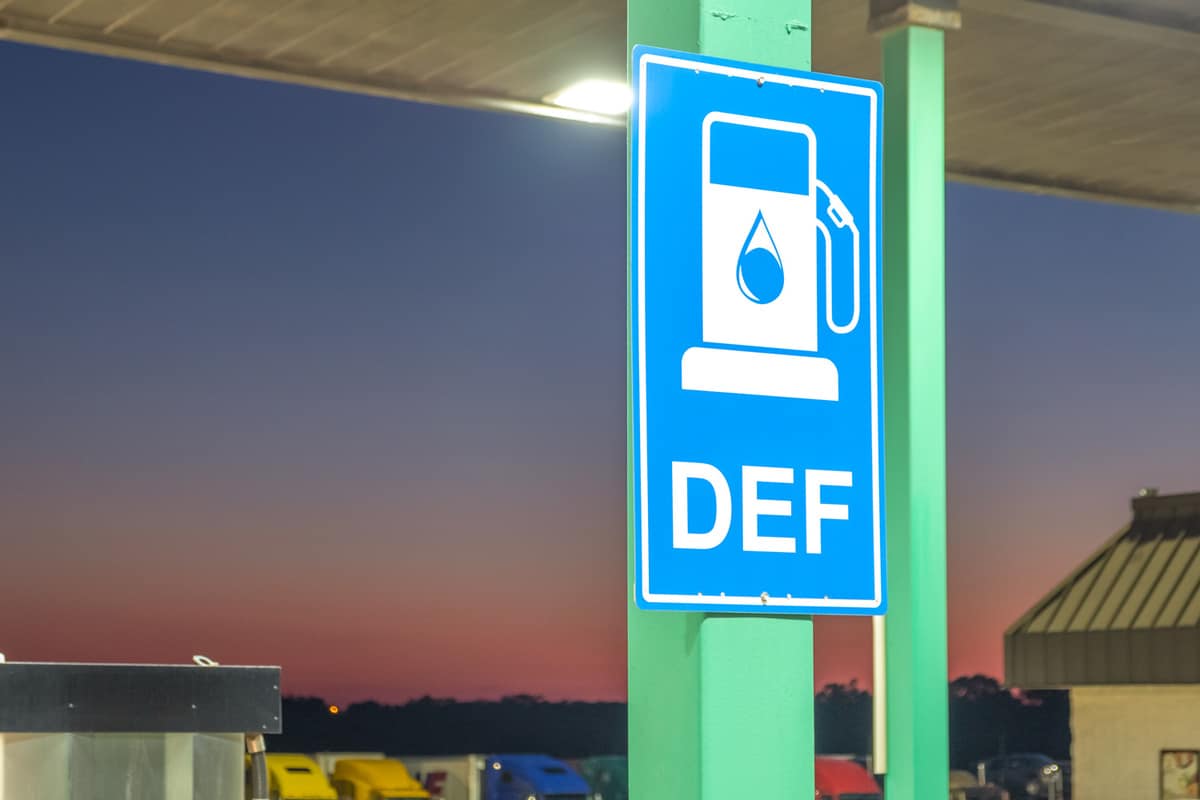 When you need to add DEF to its tank, you'll find that it's a quick and easy process. As soon as the indicator light illuminates, you should add DEF as soon as you possibly can. To do so, you'll first need to locate your DEF tank.

Where this tank is will vary, but newer model vehicles will have it next to where diesel fuel is added. Older models might have it placed under the hood, where the tank will be clearly marked in the engine bay. Be sure to first consult your owner's manual for the DEF tank's exact location.

Filling it will require the DEF and a funnel. It's a good idea to keep a shop towel handy in case of spillage. When it's full, you simply replace the cap. The indicator light will turn off the next time your onboard computer restarts.

What To Do If The DEF Is Frozen?

While you might get concerned when seeing that the DEF is frozen or slushy in the tank, it's not a cause for panic. This solution is nearly 2/3 water, so it's going to get a little slushy when the temperature falls below 15 degrees Fahrenheit.

What you definitely DON'T want to do is put any additives into the DEF tank. While you might think this will help the DEF thaw, you're overlooking the fact that the DEF tank has an internal heating element that will thaw the DEF as the engine warms.

Adding anything other than DEF to the tank will only damage your vehicle.

If the level of DEF in the tank is very low and seems to be really frozen, consider topping off the tank with more DEF. The warmer DEF from a properly stored container will act in conjunction with the internal heating element and thaw the frozen DEF that's in the tank.

How Does DEF Work?

The science behind how DEF works isn't overly complicated. And while you certainly don't need to pass a science quiz to drive a vehicle with a diesel engine, knowing how it works and why DEF is mandated might give you a better understanding of why DEF needs to be added to begin with.

On the chemical level, DEF is the combination of deionized water and urea that combine, causing a chemical reaction that makes harmful nitrous oxide (NOx) transform into water and gas. NOx is known for being a leading contributor to smog, increased greenhouse gases, and acid rain.

The active ingredient in DEF is urea. This is a nitrogen-based chemical compound that is not only used in DEF but also in fertilizer. 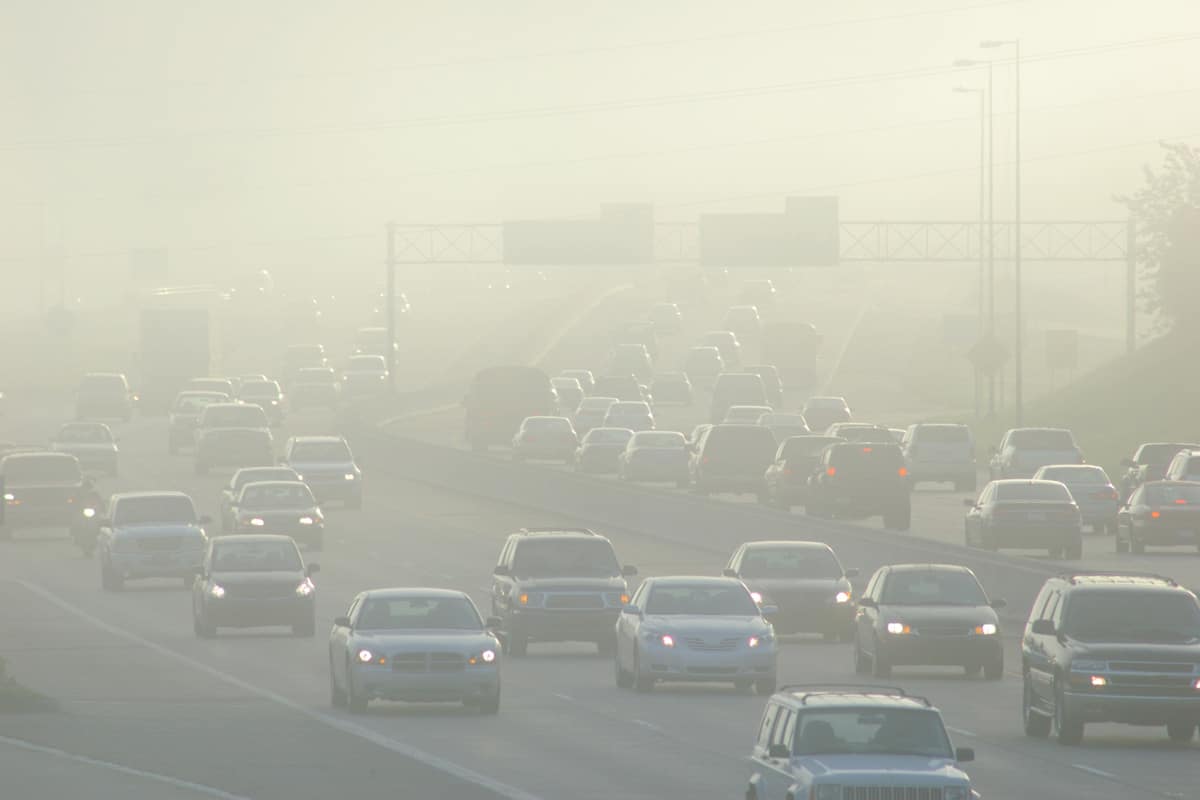 How Long Will A Tank Of DEF Last?

There is not a standard answer to this question. The amount of mileage you'll be able to get before the DEF warning light comes on will depend on a variety of factors.

The model vehicle you are driving is certainly a factor. But how old it is and how well it has been maintained certainly factor into how long you can go in between DEF being added. The average is reported to be 3,000 miles, but this can vary greatly.

Your vehicle's owner's manual will indicate an estimate of how far it can go before the DEF tank needs to be refilled. Be sure to keep some DEF on hand so you won't be faced with running out when you need it the most.

When To Add DEF To A Duramax Engine

If you are operating a vehicle with a Duramax engine, you'll be adding DEF to the appropriate tank at different intervals.

Users on the online forum The Diesel Place indicate that you can get around 7,500 miles on a full tank of DEF. At around 5,000 miles, the DEF light indicator will come on, signaling to the operator that they have 30% DEF remaining.

What Would Happen If You Put Diesel In Your DEF Tank? 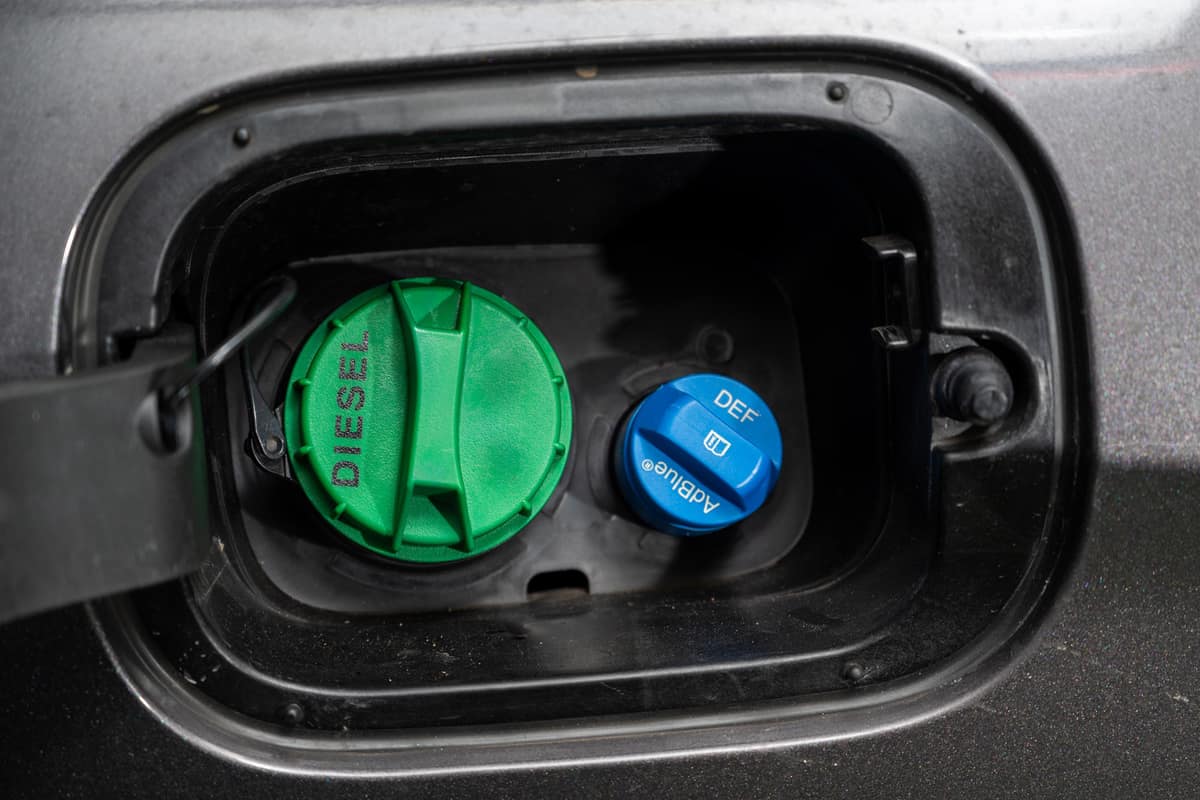 Putting diesel in your DEF tank should be avoided at all costs. Though the tanks for each are often located next to one another, the tanks are built only for their respective fluids.

The seals in the DEF tank are meant to be compatible with urea. Adding any amount of diesel fluid to this tank will result in damage to these seals. Leakage from the seals will result, and you'll find yourself possibly having to replace your DEF tank.

The tanks for diesel and DEF are marked. Pay attention to what you are adding to your tanks to avoid any costly problems.

What Happens When You Run Low On DEF?

As we pointed out earlier in this post, when you begin to run low on DEF, the indicator light will illuminate on your instrument panel. The amount of fluid remaining to trigger this light varies from model to model, but in general, it comes on when the tank is 90% empty.

It's advised that you add fluid as soon as you can avoid issues with operating your vehicle.

If the amount of DEF in the tank is low enough, it will impact the power of your diesel engine. You'll notice that it won't be able to accelerate as quickly, as the engine will go into reduced power mode.

If you let the tank go empty, some diesel-powered vehicles will only be able to crawl along while others will not be able to move at all.

To avoid issues, routinely check the fluid level of your DEF tank. Keep DEF on hand so that you can get it quickly replenished if your warning light should ever come on.

Why Is There A DEF Shortage? 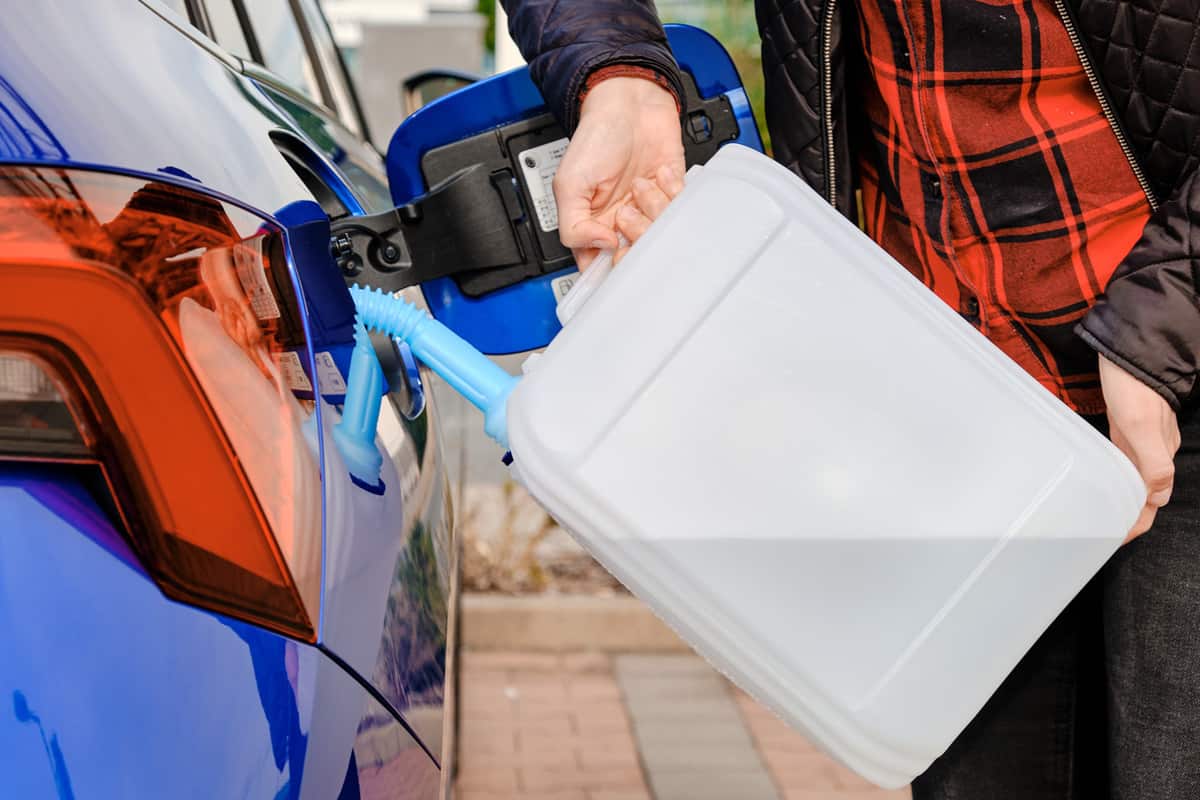 DEF has been a little difficult to get lately, with some concerns that widespread shortages of this fluid are on the horizon. China is the world's leading producer of DEF, namely for the compound urea which is its reactive ingredient. Urea is also used in fertilizer, which China is also the leading producer of.

Fearing food shortages in their own country, China has limited its supply of urea to foreign markets. While this has had an impact on trucking in Japan and South Korea, it has not made much of a ripple in the United States yet.

The U.S. gets most of its urea from Canada. While global supply is in higher demand, watch for the price of DEF to increase some in the United States.

DEF has been mandated for use since 2010 for certain diesel vehicles and has done a measurable job in keeping dangerous NOx out of the atmosphere. While DEF is becoming in tighter supply in parts of Asia, the U.S. has not been significantly impacted by China stockpiling urea.

Be sure to keep your DEF tank full, as your vehicle will perform sluggishly if it runs too low. Drive safe!

If you found this post on DEF to be helpful, take a look at these other diesel posts:

5 Of The Best Fuel Injector Cleaners For Diesel Engines