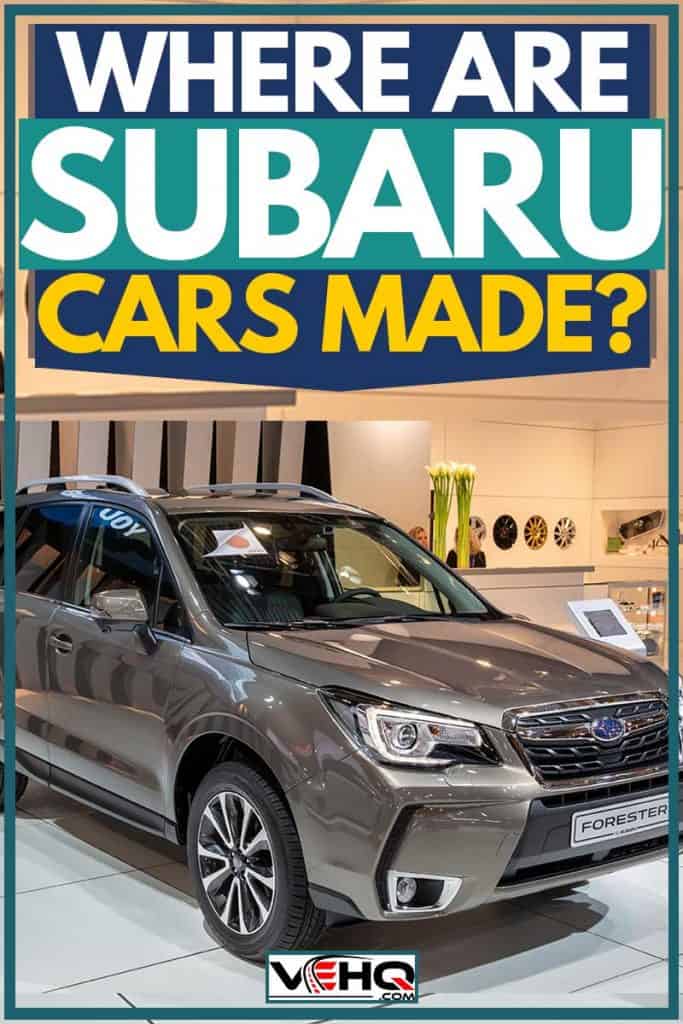 If you live in the Pacific Northwest, the Northeast, or the Appalachian mountain regions of the US, you’re probably well-aware of how popular and loved the Subaru car is. Sometimes in a parking lot, you might even approach the wrong Subaru because it looks like your own parked a few spots down. They’re just that prevalent. But where exactly are Subarus made?

In this post, we’ll look at where various models are made and learn a bit more about the most popular of them. We’ll also explore Subaru’s origins, who drives them, and how reliable they are. Keep reading!

Where Are Subarus Manufactured?

As mentioned above, Subaru is manufactured in two places: Gunma Plant – Ota-shi, Gunma Prefecture, Japan, and Subaru of Indiana Automotive, Inc. – Lafayette, Indiana, USA. The US plant manufactures three models for distribution solely in the United States, but the Japanese plant manufactures for worldwide consumption.

The following models are built at the Subaru plant in Japan. We’ll look more closely at the most popular vehicles.

The sports car of the Subarus, the BRZ is a rear-wheel drive four-passenger coupe. Car and Driver called it one of the cheapest and purest sports cars around. They start at approximately $30,000 and provide a whole lot of fun for the money. The ts version only comes with a standard stick shift.

The Crosstrek offers the best of both worlds. It delivers the driving feel of the zippy Imprezza while giving you all of the trappings of a small SUV. It has the standard Subaru AWD but is also available in an electrified hybrid plug-in model for the energy-conscious drivers. It can go up to 17 miles on electricity alone! Prices start around $22,000 for a new model.

The Forrester is Subaru’s compact SUV model. It’s a highly rated Subaru model and super popular for its size, safety, reliability, and overall practicality. Prices start around $25,000 for a new model.

The following models are built at the plant in Lafayette, Indiana. This plant employs over 6000 associates and produces three models exclusively for the North American market. You can even arrange to take a tour of the plant if you want to go check it out.

This is the biggest of the Subaru models with 3-row seating and enough capacity to hold seven passengers. It also has 5000 lbs of towing capacity, which means it can haul a lot of your recreation toys, like boats, jet skis, ATV’s, and even the family lawn equipment when needed. Prices start around $32000 for this large, versatile Subaru.

The Outback is the small station wagon/crossover SUV version of the reliable Subaru. This AWD model comes in seven different variations that range in starting prices from just under $27,000 to just under $37,000. It’s definitely one of the most popular models of Subarus here in the USA, and used models can be found in a wide variety of price ranges and still run great.

The Legacy is the mid-sized Subaru sedan. It comes with all the same excellent weather-reliable AWD handling as the other models and Subaru’s excellent safety features. Prices start at $23,000 and go up to about $36000 depending on which of the six versions you choose.

Is Subaru A Japanese Company?

It is! Subaru is part of a large Japanese transportation conglomerate that was called Fuji Heavy Industries. But in 2017, they changed the corporate name to Subaru Corp. in honor of its most popular motor vehicle make. The company started out making aircraft engines back in the early 1900s. The first Subaru was launched in 1958, and since then, the Japanese company’s sales of the cars have grown ex[ponentially. They make barely a million vehicles a year, but they are the largest maker of AWD vehicles and the 23rd largest automobile manufacturer in the world. The company is also highly profitable.

Subarus have been pigeonholed over the years into various categories of car drivers, most notably, the LGBT community (specifically the “L”) and their allies, those wanting a reliable all-weather vehicle, and rally enthusiasts who are fans of the Impreza sports models. But the reality is that everyone drives the Subaru. It’s an excellent car for older and younger drivers because of the safety features, and it’s terrific for adventurers because of the AWD handling and hauling capacity. And for budget-minded drivers, though your initial investment may be more than you want to make, they hold their value and are mechanically sound.

Subarus are awesome cars. They only hold a small percent of the US market, around 3%, but it’s a powerful segment. The Insurance Institute for Highway Safety named them a top pick for safety. Consumer Reports consistently ranks various models in their top picks of cars for performance, comfort, reliability, and utility. Plus, they’re just fun cars to drive. They handle well, won’t let you down in rain and snow, and come in some really fun colors, too!

Whether you purchase a Subaru made in Japan or the United States, you’re guaranteed to end up with a great car. You don’t get top rankings in safety and reliability and comfort, along with excellent profitability for nothing. Many Subaru owners trade-in for another Subaru and never consider switching makes.

If you enjoyed this post on VEHQ.com, please click through to these other posts you may find interesting. Thanks for stopping by!

Where Are Kia Cars Made?

What Should Be My First Car? [Including 10 Cars You May Like]

What Does “Eco” On A Car Mean?

Why Are Electric Cars Heavier?