Taking an RV out for a drive is easier said than done. RVs are behemoths of the road, weighing several tonnes and stretching up to several feet. In many states, there are laws on where you can and can’t take your RV. In California, for example, the maximum trailer length for parks varies between as low as 15 feet to as high as 40 feet. If your RV’s span exceeds the maximum allowed limit, you won’t be allowed in.

Make sure to check in with the local state laws before taking your RV out for a drive. There are many places you can take camp in your RV, some with access to many facilities, others completely devoid of them. Let’s discuss them in greater detail. 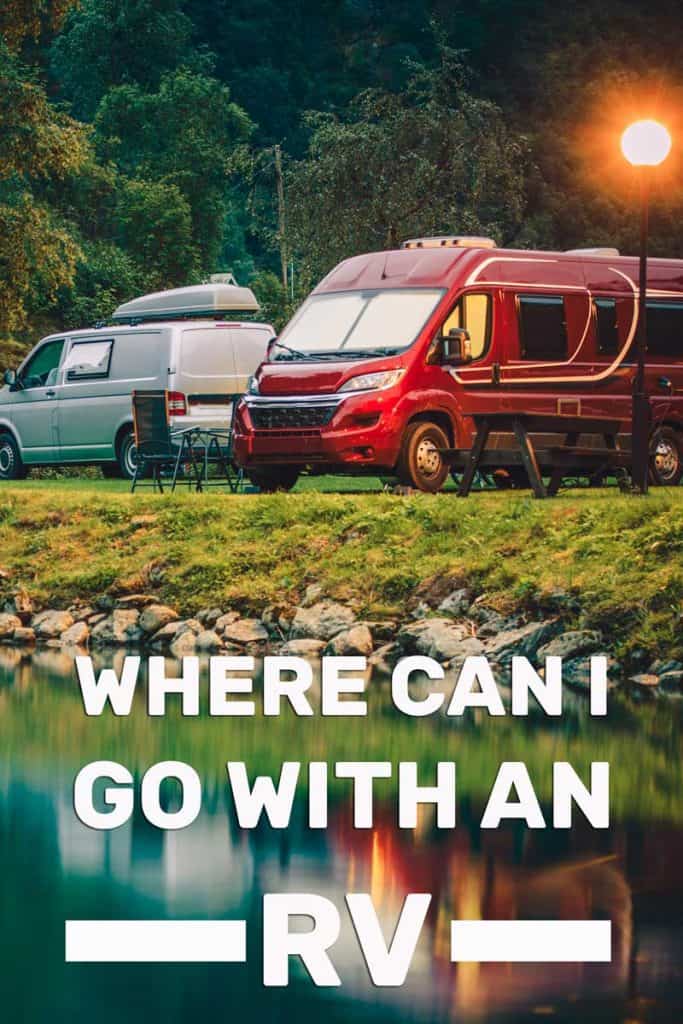 Plan Before Travelling to Major Cities

Many motorhome owners believe that entering a metropolitan area isn’t possible. Obstacles such as traffic jams and road congestions discourage the idea. Yes you can travel around the city in an RV, but you will want to avoid narrow streets, construction zones, and low bridges. Your priority in the city should be to find RV campsites.

The price of camping in each city widely fluctuates based on how far you are from the city center and what facilities you want to avail. RV campsites in larger cities tend to be more costlier, but they also provide easy access to important places such as malls and hospitals. You can reduce the cost of camping outside a big city by choosing a campground that is at least 20 to 30 minutes outside the city center.

But if you’re mainly using your RV to navigate around the city and transportation, then don’t. It’s not a good idea because RVs are massive and bulky, and city streets tend to be congested and narrow. A better option for transport is to use public transportation. That said, RVs are a great way to explore a new city. Just make sure you do a bit of research in advance and try to be smart about driving.

Sure your RV is supposed to be self-contained and fully capable of bearing the strong heat of the great outdoors, that doesn’t mean you should camp out in the scorching hot weather during summer months. At least not without taking a few precautionary measures to ensure you minimize exposure to heat and UV radiation.

Don’t camp out in super hot areas like Death Valley because it will take a toll on your RV, causing tremendous damage that will cost a lot of money to repair. Plus, the enormous risk posed to your health doesn’t justify the arduous journey.  Death Valle is known for excessive temperatures such as 130 degrees Fahrenheit, it goes without saying that these aren’t good for health.

Don’t Camp out in Rugged Areas

It is a bad, bad idea to camp in areas that feature curves and twists along tall cliffs that lead to a deadly fall should the RV fail to stay on the road. For starters, don’t go to a particularly famous road called “Going-to-the-Sun-Road. Besides, if your RV is longer than 21 feet, you will be stopped by a park ranger. It’s for your own safety!

Parking Your RV to Stay the Night 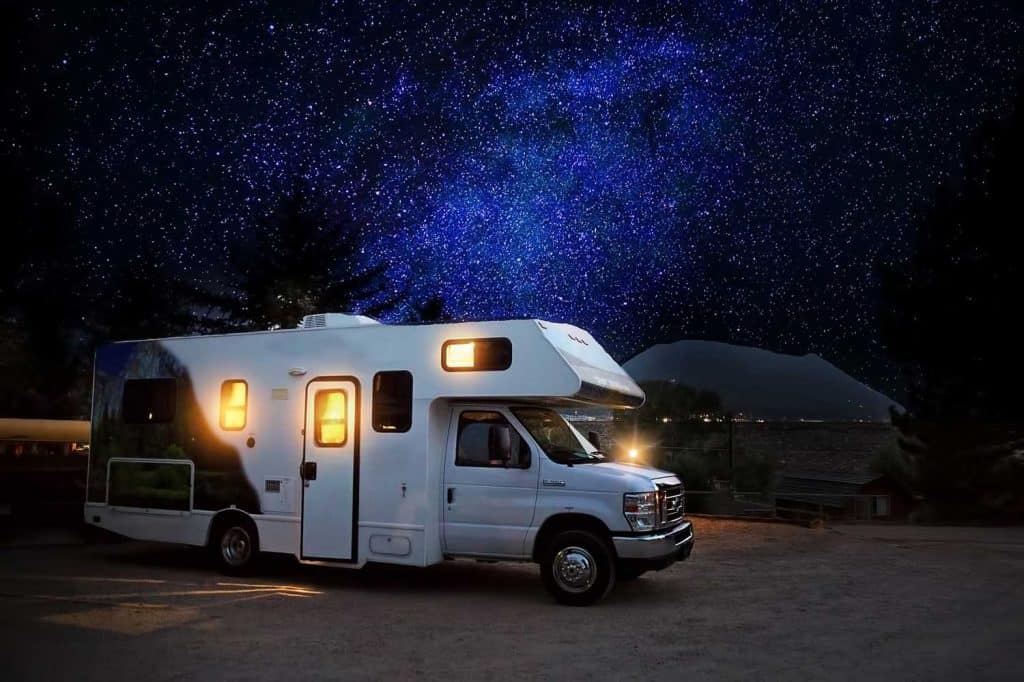 If you can, try to find campgrounds to park your RVs, particularly those in State Parks and National Parks. An important point to note is that RV parking is not allowed (illegal) at roadside areas except in a few states. To get an in-depth overview of where you can park your RV to stay the night, check out this link.

Find Campgrounds for your RV

RV campgrounds are incredibly versatile. They range from a few dozen sites to lush resorts with hundreds of sites that cater to RVs of every shape and size. Some campgrounds provide just the basics such as electricity and freshwater. Others are designed for electronically savvy travelers who can’t live without services such as Wi-Fi. Exclusive amenities such as pools, splashgrounds, fitness centers, and café serve the complete package.

National Parks in America are full of valleys, mountains, natural views, and spectacular beauty. The best part is that national parks often offer accommodations for RVs. Many won’t offer utility hookups such as electricity and water, which means you’ll have to camp outside the RV. For many motorhome owners, this completely defeats the purpose of camping out. 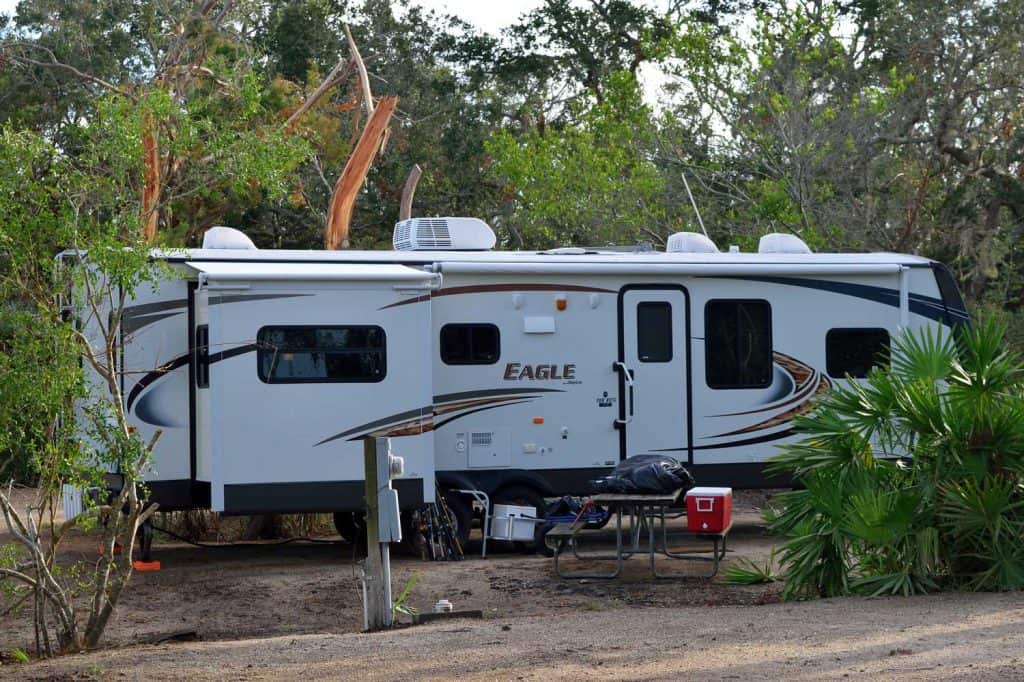 The reason why many national parks don’t offer fully features hookups for RVs, is simple: they want to discourage humans from changing the environment too much. National Parks serve the singular purpose of preserving nature. It goes without saying that full utility hookups require laying out new land, pipes, and wires. This cannot happen without disrupting the existing environment.

So if you’re keen on visiting protected land but don’t want to ruin the natural beauty, then be prepared to sacrifice a few amenities. Few sites such as Trailer Village in the Grand Canyon National Park and Vail Resorts in certain portions of Grand Teton National Parks are more friendly towards RVers and offer hookups such as water, electricity, and sewers. Plus they also offer 20, 30, and 50 amp electrical options.

A visit to the lakes brings tones of opportunities for outdoor exploration and fun. From spotting many unique plants and animals (some dangerous) to hiking in scenic routes, you would be bustling with activity. You can also spend some quality time fishing. Some waters are known to have more than 80 different species of fish, ranging from salmon and trout to carp and perch.

But lakes don’t tend to be particularly friendly towards RVers. For starters, they don’t offer electricity. That’s the price you pay in order to see beautiful waterfalls, beaches, and sand dunes. But some lakes offer fully featured campgrounds that often have full hookups. Furthermore, they can accommodate RVs of up to 35 ft.

Some great lakes for RVing include Lake Superior with its popular Cascade River State Park and Temperance River State Park. In Wisconsin, you can travel to Apostle Islands National Lakeshore and find a fully featured camping spot on many of its islands and mainlands such as Point Detour Campground.

Take things up a notch by travelling to wilderness areas. You won’t find any hookups for electricity and sewerage. Life out in the wilderness is as ‘wild’ as it can get. This means you will have to plan your trip in advance and manage resources like electricity, water, and fuel. On the flipside, wilderness camping gives you the best of both worlds: you get to enjoy the wilderness areas untouched by human and retreat into your RV when you’re too tired.

You’ll be dealing with a lot of animals (and hungry bears), so make sure to prioritize safety. This means hiding any food you have at least a dozen feet away from your camper. Also keep a weather band radio nearby, in order to learn in advance about areas that are more tornado and hurricane prone.

Most wilderness camping locations are run by the US Fish and Wildlife Service, Army Corps of Engineers, and the Bureau of Land Management. Local and state governments also operate wilderness locations. Depending on the site, you may or may not be charged for primitive RV camping. Whichever campground you decide to camp in, make sure to stock up on plenty of fuel, water, batteries, and waste tanks so you’re always one step ahead.

More people are now demanding access to national forests, but it is proving too difficult to keep up with growing demand while preserving nature. There are a number of sites that offer campground facilities such as Croatian National Forest, Nantahala National Forest, Pisgah, National Forest, and Uwharrie National Forest. They will charge you anywhere from $20 to $50 per night.

You get access to hookups for electricity and sewage. Some of these sites include large picnic areas, beaches, and more to explore.

If you’re camping out in a National Forest, make sure to check out the Forest Service Visitor Map, this recently released app gives you a bird’s eye view of the area, including its roads, wilderness areas, scenic rivers, and recreational sites. This map is easily accessible on any device that uses the internet, including computers and smart phones.

The map lets you explore features such as natural viewing spots, campground, and hiking trails at the push of a button.

Off-grid camping or ‘boondocking’ should be only attempted by RVers who are self-sufficient with their water, electricity, and waste. Most National Forests allow boondocking for campers, so long as they are familiar with local regulations such as burning ban. The main advantage of off-grid camping is that most areas won’t charge you a fee. You will have a limit range of 3 to 30 days depending on the camping area.

Boondocking is a popular way for full-time travelers and vacationers alike. What it lacks in amenities, it provides in peace and solitude. Such camping sites are free and are often closed to biking, hiking, and other adventurous opportunities such as kayaking.