AirTags can be put in vehicles to keep track of their location. An AirTag is a small circular device designed to be planted in a vehicle and serves as the beacon for its tracking. Finding the perfect spot for it in your car might look like a tricky task, so we have researched this to help you put it in the best possible place.

You can put the AirTag anywhere inside the vehicle since placing them above or below a surface will not interfere with its tracking ability.

However, even if that is the case, most car owners prefer to have it installed in a concealed spot, like under or inside any of the car's interior parts or accessories. They choose to hide the AirTag from sight for two reasons — aesthetics and security.

After knowing that you can put it anywhere in your car, you must be thinking of how are you going to install it. Do you need to stick it on the surface? What material are you going to use if you have to adhere it? These are some of the questions that we will answer in the next section, along with other helpful related queries. So, keep on reading!

Placing The AirTag In Your Car

AirTag is a tracker developed by Apple to allow their users to locate their personal items. Through a Bluetooth signal, other Apple devices can detect the location they can send to the owner's iCloud.

Since the whole process of how the AirTag works include Apple products and software applications, you cannot pair this tracking device with android as it is not compatible with its system.

However, if your Android phone can read an NFC tag, you can detect a lost AirTag. This detection allows you to access only two things through a web link—the page where an instruction to contact information of the owner is provided (if marked 'lost') and an option to disable the device.

To start placing the AirTag inside your car, here are two simple steps that you can follow.

Before you decide on a spot, the first thing you need to attend to is the setup of your AirTag. Connect it to your Apple devices such as iPad, iPhone, or iPod, then register the tracker with your Apple ID. Test if it is successfully enabled and can be tracked in Find My application. If yes, you can now proceed to the next step.

Even though AirTag is just a little bigger than a coin (31.9 millimeters), it can still be easily spotted since it is white and silver. Because of this, the tag is highly reflective, especially in sunlight. It also has glossy parts, which also adds to its visibility. It is also better to find a place where you can adhere the tag firmly to avoid it being tossed around as the car moves.

Spots Where You Can Hide AirTag 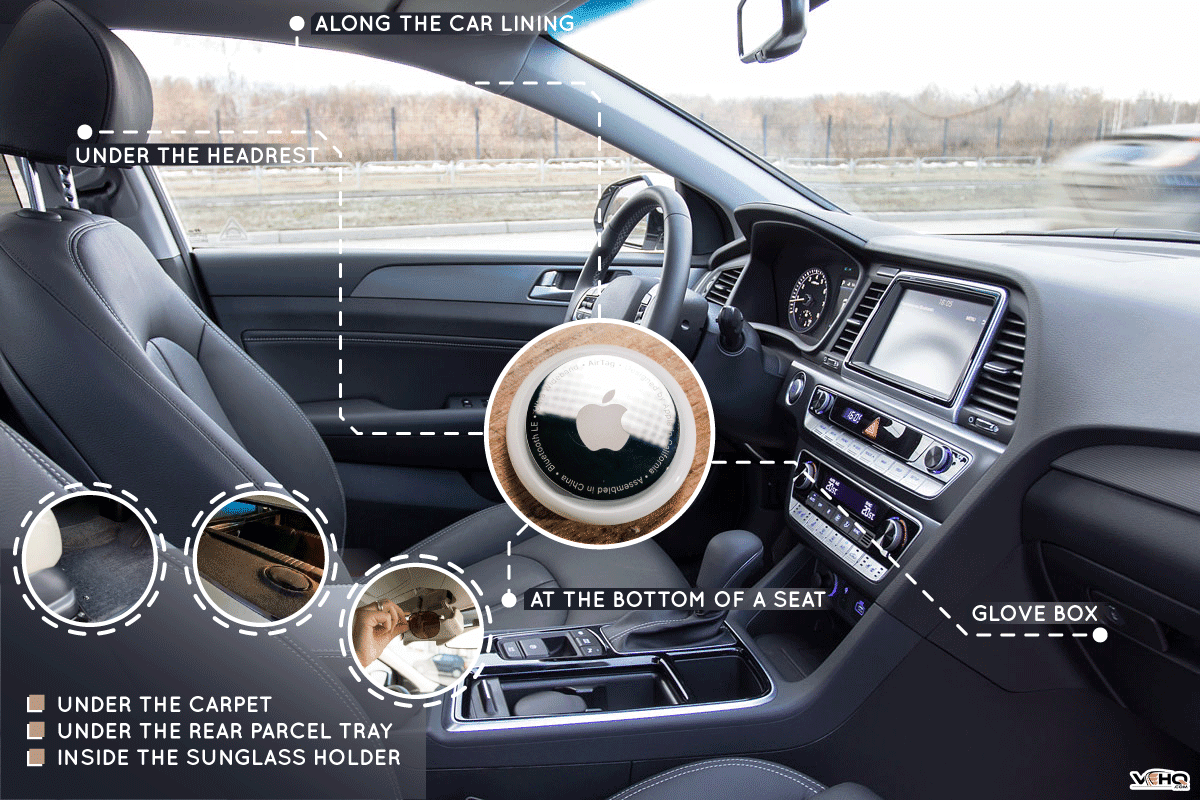 By placing the tracking disc in the given locations below, you can conceal it properly.

Since most places mentioned will put the AirTag in an enclosed space, you might be worried that the AirTag will melt or malfunction due to a high or low temperature. Luckily, this shouldn't be an issue since the device can operate between -4 to 140 degrees Fahrenheit.

Aside from the aesthetic purpose, concealing its presence will also be beneficial if your case is stolen. Since other people can't tell that there is a tracking device kept inside the car, they will not be able to throw it away, and you will still be able to track your vehicle.

This is particularly helpful in places with high vehicle theft reports, such as Colorado, Washington, D.C., California, New Mexico, and Oregon. These states had the most contributions out of the 932,329 reported car thefts in 2021.

On the other hand, you can choose not to hide the AirTag in the places that are mentioned above. There are accessories that the manufacturer specially created to let you hang them in plain sight instead.

Do You Need To Stick The AirTag In Place?

Whether or not you will stick the AirTag may depend on where you will put it. For example, if you want it under the seat, you will need an adhesive material to keep it in place. However, AirTag does not come with any standee or holder when purchased. So how are you going to stick it?

Here are two things you can use to stick AirTag to a surface.

This two-piece case allows you to firmly place the AirTag on a surface using 3M supreme adhesives behind the cover. It also protects your tracking device from any scratches or damage.

Commonly known as double-sided tape, this adhering material has to be directly patched to the AirTag, unlike the mounting case. However, this is cheaper and more common at home if you need to stick the device immediately.

How Long Does AirTag Battery Last? 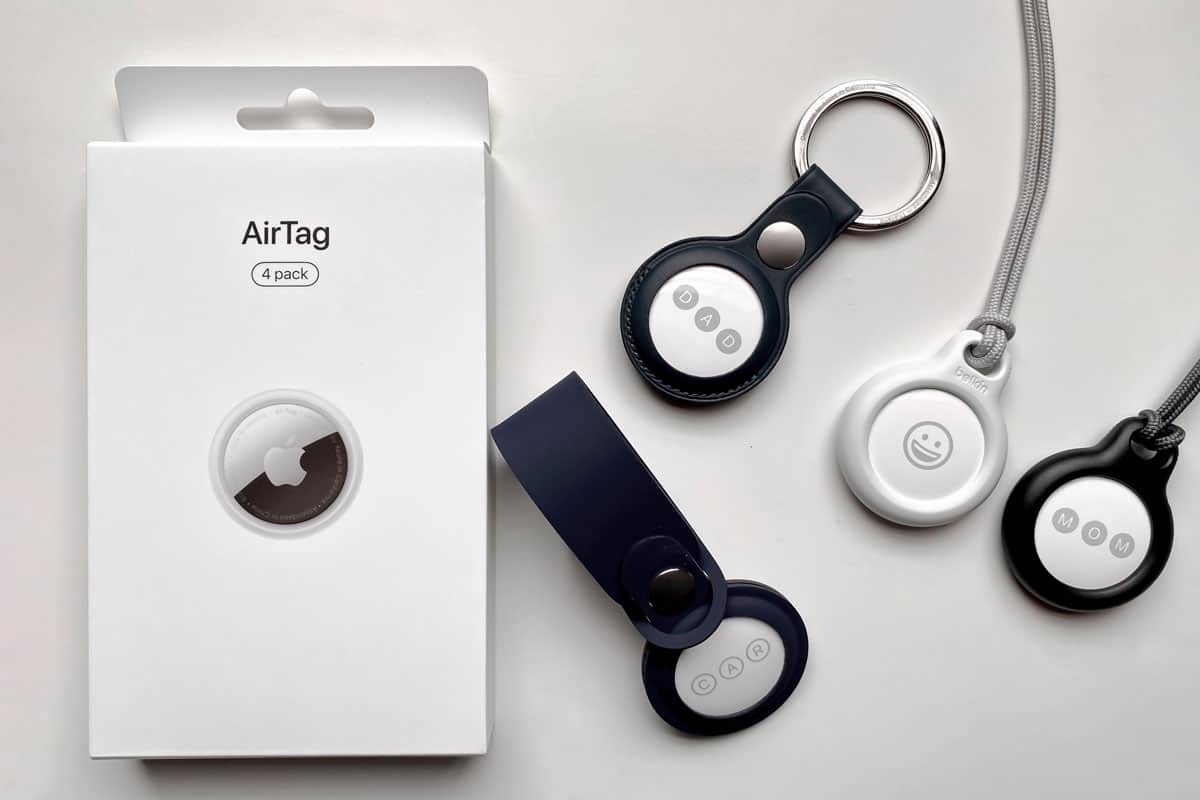 AirTag batteries can last for more than a year. The exact period where it keeps the tracking device running depends on how much you are using it.

The more frequently you use the AirTag, the faster it will run low on energy. You will know when it is time to change to a new set of batteries once your Apple device notifies you about it.

Since you do not know the specific time you will need a replacement battery, it is better to have a spare piece with you, especially when it has been months since you first used the AirTag.

Are you suspecting that your remote start is draining your battery? Find out why it does and what you should do by reading this article: Remote Start Is Draining My Battery – Why? What To Do?

How Do I Turn Off AirTag When Not In Use?

You cannot turn off an AirTag when not in use. Removing the battery inside is the only way to stop it from running. To remove the battery, simply push the back side of the AirTag and twist it counterclockwise until the cover loosens. Take out the battery and put the cover back in. This time, twist it in a clockwise direction to lock.

Why Is My AirTag Beeping? 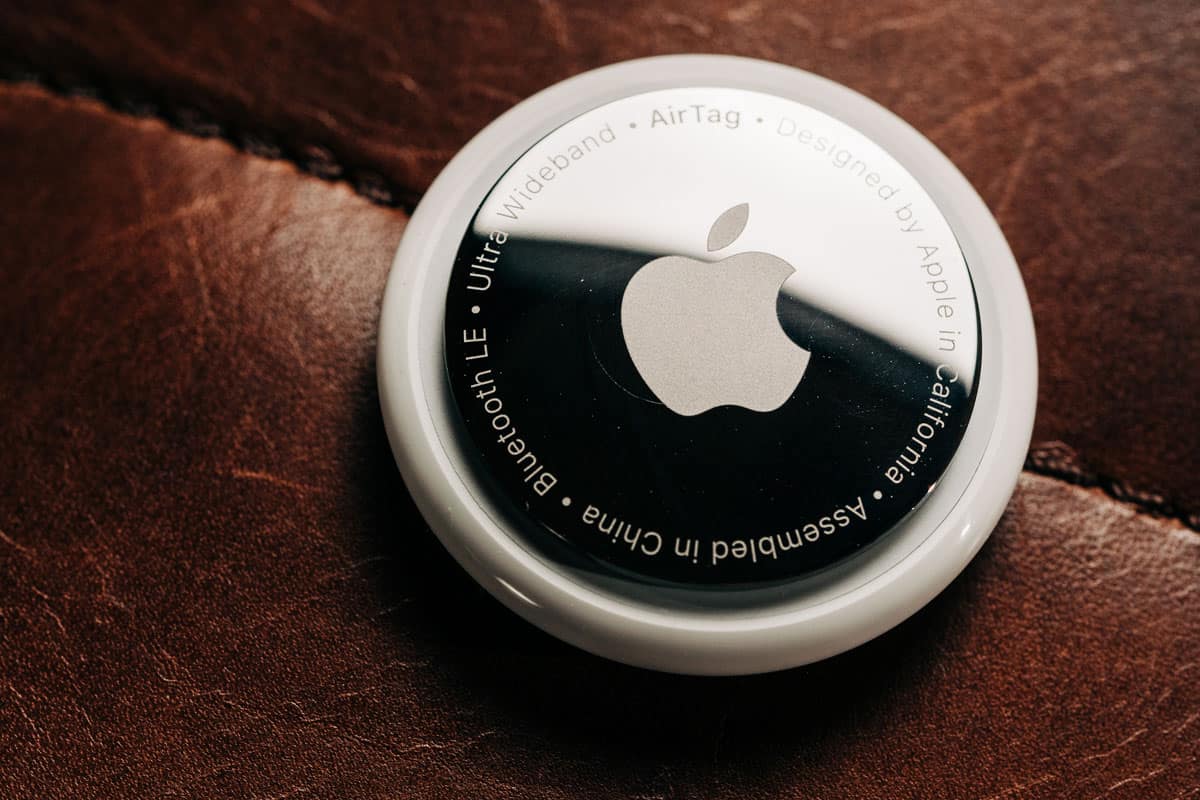 There are several reasons why your AirTag is making a beeping sound. Take a look at them below.

Want to know how you can track your Ram truck order? Read this article to learn how. How Do I Track My Ram Truck Order?

How Do You Tell If You Have An AirTag In Your Car? 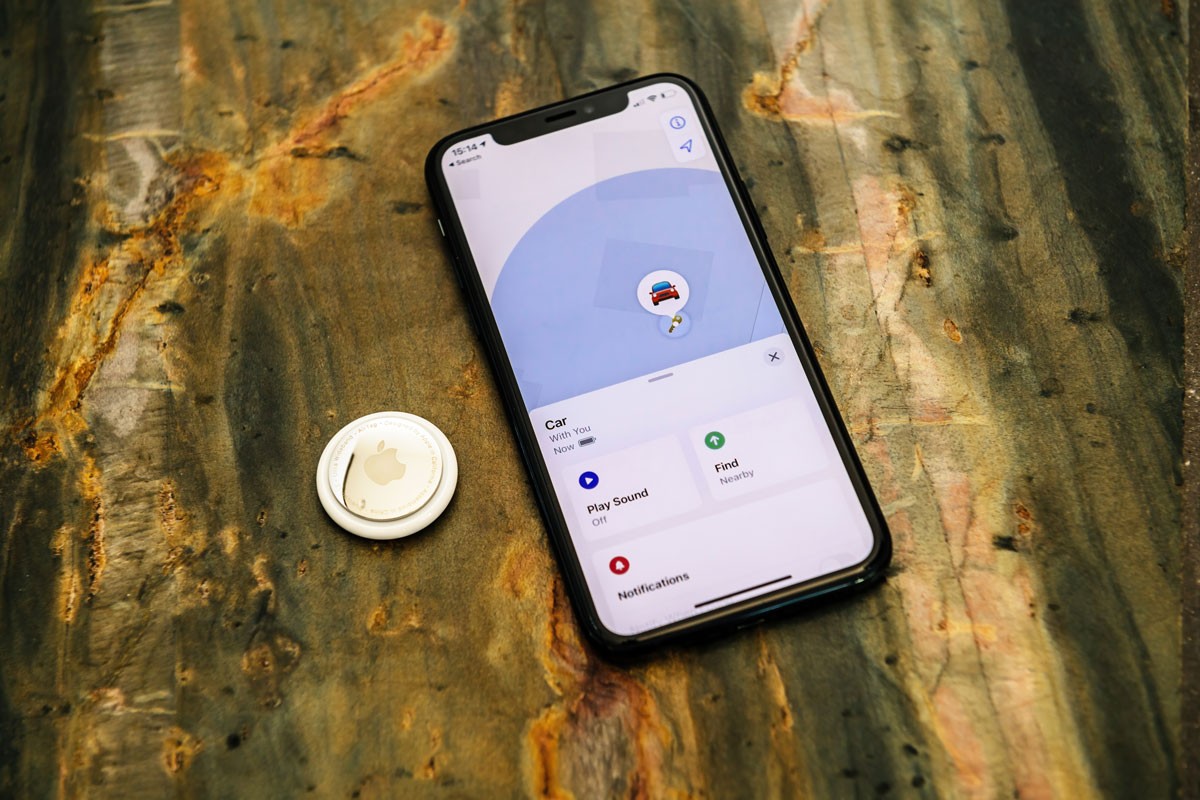 You will know that you have an unknown AirTag in your car if you receive a notification on your phone. This alert lets you know that an AirTag that is not yours is in your vehicle. The second one is when you hear a sound which indicates that the tracking device is lost.

Don't you know that there are a lot of ways where you can track your stolen car? Read this article, "How Can I Track My Stolen Car? [Inc. 5 Actionable Ways]," to learn five more methods to get back your vehicle. 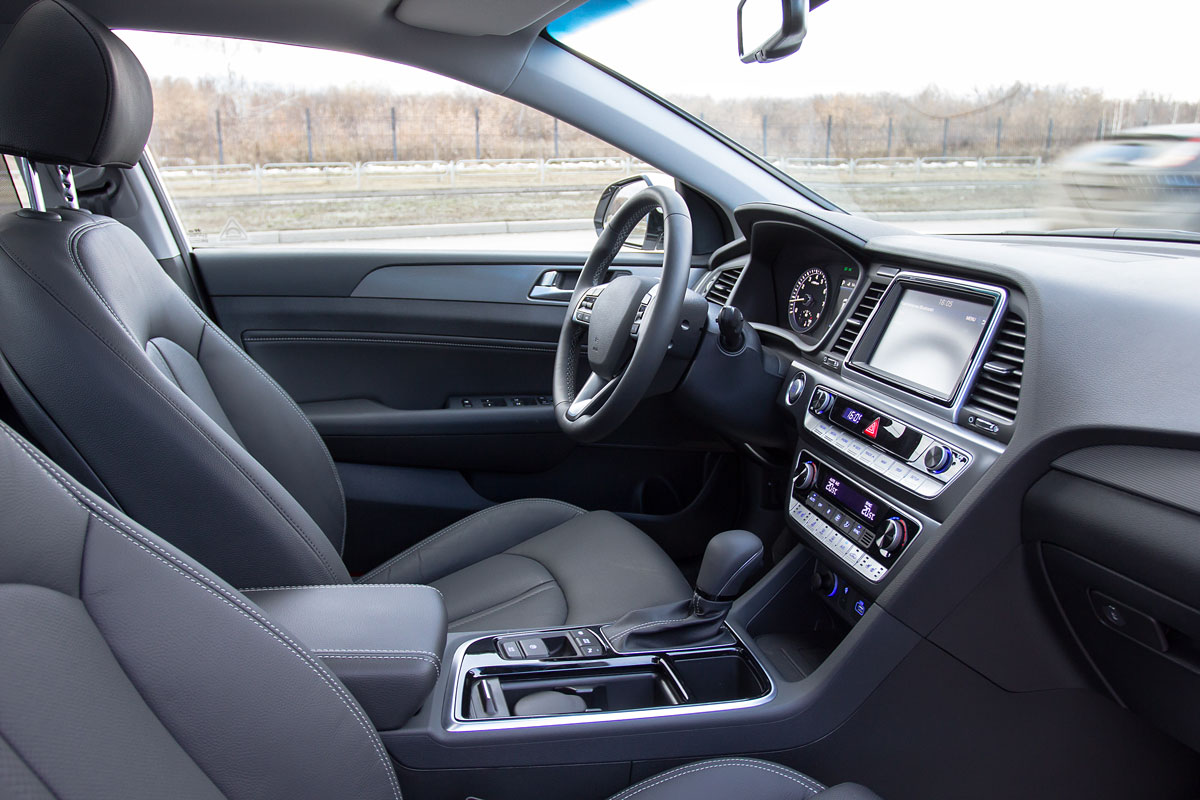 You can put the AirTag anywhere inside your car. However, if you are considering the look of your car's interior, hiding it at the bottom of a seat, inside the glove box, along the car lining, under the carpet or rear parcel tray, inside the sunglass holder, or under the headrest may be the best spots for you.

Not placing it in an obvious place can also help you in case of auto theft since the thief cannot get rid of the device, which allows you to know where they are taking it. You can purchase adhering or holder materials to make the AirTag stick to a surface. You can choose between stick-on cases, adhering tapes, or key chain holders.

“Since other people can't tell that there is a tracking device kept inside the car, they will not be able to throw it away“

Yes they can; it’s beeping. Also they get a notice on their iPhone.