You are out for a drive when you hear a loud sound coming from under the hood, like a firecracker. Is it the engine that’s acting up? Maybe your car’s damaged? Your mind is filled with all sorts of assumptions at this point. We understand your panic, and that’s why we’ve scoured the internet tirelessly to provide you with an answer to calm your nerves.

Vehicle backfiring is common, but the right maintenance routine can prevent this from happening. Cars backfire for various reasons, most commonly:

You now have more questions about cars backfiring than answers, so let’s delve into this topic. We’ve covered everything from why cars make loud, “POPS!” to whether or not pops and bangs are legal. Keep reading, and we’ll answer everything about why cars backfire. 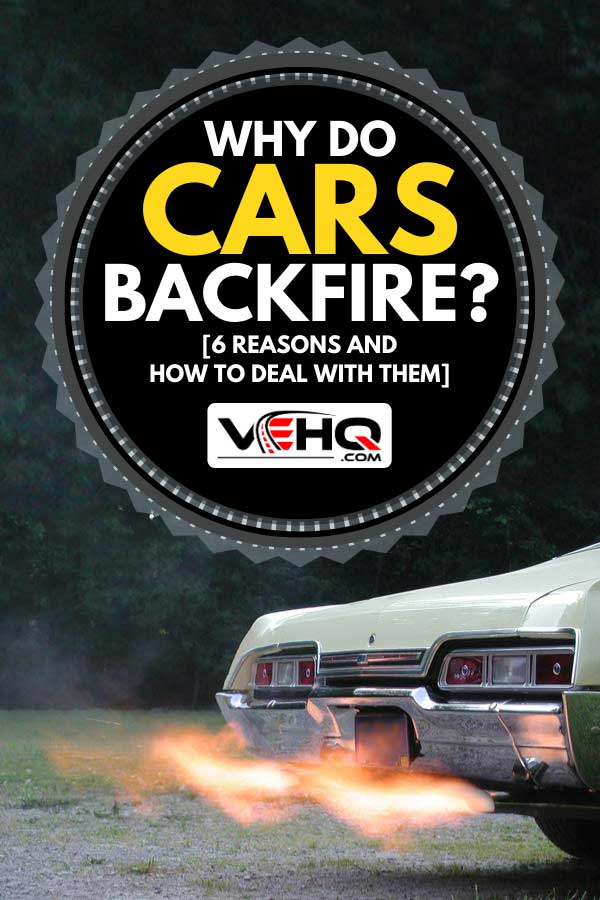 Why Do Cars Backfire?

With so many potential causes, it helps to explain why a car backfires by looking at each reason individually.

Also referred to as retarded timing, poor engine timing occurs when the spark timing isn’t right. Once both sets of valves are closed, the spark fires inside the cylinder.

Poor spark timing causes the valve to fire too late, when the exhaust valves are already open, or too early, before the intake valves are closed. This causes the air/fuel combination in the intake or exhaust to burn, which results in a backfire.

If you’re cruising around town in the latest ride, please don’t attempt to address the spark timing issue on your own. It is controlled by computer. A trained technician will be in a better position to handle it.

Such a ratio is caused when there is excess air and insufficient fuel. It’s also called either ‘running lean’ or ‘running rich’ and could be caused by clogged fuel injectors, faulty oxygen sensors, a clogged fuel filter, or low fuel pressure due to a fuel pump failure.

When this mixture burns, it burns slowly, meaning that some air and fuel will be left unused when the valves open. The extra air forcefully burns the remaining fuel, and spits it out when the exhaust valve opens up. This causes the explosion to ‘spill’ out of the cylinder making a loud popping noise. The result? You got it; a backfire.

A spark plug emits a spark of electricity across a small gap that creates the ignition for the combustion required to start your car.

Spark plugs are designed to burn off deposits from contaminants such as fuel additives. And, they withstand extreme pressure and heat within the cylinders.

When spark plugs don’t fire at all or when they fire out of turn, they can cause backfiring. In newer vehicle models, a malfunctioning spark plug could be due to either wear over time or carbon buildup.

In older models, the likely culprits are incorrect wiring, damaged distributor caps (that deliver the charge to the incorrect plug at the wrong time), and shorts in the wiring.

Systems on older engines aren’t computer-controlled, so they are more prone to backfiring. They require constant adjustments, commonly referred to as tune-ups.

On older cars with spark plug wires, wires that are installed or crossed in the wrong order could lead to a spark firing in a cylinder when it’s not supposed to. The result of this could be a major backfire.

In addition, cars that have been around for years feature carburetors, not direct fuel injection. Should the carburetor malfunction or need service, it will spray the wrong amount of fuel, leading to a wrong air-fuel ratio and an engine backfire.

In a design that incorporates a distributor cap, every spark plug wire is connected to the distributor cap's head. As time goes by, environmental elements may cause the spark to cross over from one spark wire to another that’s near it.

When that happens regularly, it creates a carbon track, similar to a shortcut for the spark. The track causes a misfire that closely resembles that of a cracked distributor cap.

A distributor cap is a removable piece used in spark ignition systems to cover both the rotor and distributor.

It helps to distribute electric current from an ignition coil to a set of spark plugs. The cap protects the distributor and rotor from contamination, as well as covers them.

A damaged or broken distributor cap permits moisture to leak in. This causes a spark from one cylinder to fire out another cylinder, which distorts the order of the sparking and results in a car backfire.

Why Do Cars Make Popping Noises?

An irritating popping noise from the engine can be a sign of several problems, including:

The good news is, the problems are easy to fix and don’t always require a mechanic’s touch. To be on the safe side, please take your car to a mechanic regularly and share with them the symptoms it shows.

Are Pops And Bangs Illegal?

Pops and bangs are perfectly legal. They are a cool addition to many modern automatic sports cars. Ford has gone public about pops and bangs. The EPA and their counterparts have also tested them and given a thumbs up.

The noise that some bangs and pops produce is nothing that a little sound adjustment can’t fix.

Why Do Turbo Cars Backfire?

Turbo cars use exhaust to force plenty of air into the cylinder and spin the compressor. For all that extra air sucked into the engine, a turbo engine must get more fuel as well. Once your foot lets off the gas plenty of raw, unburned fuel comes out of the cylinder and flash ignites, producing a backfire sound.

How Can I Make My Engine Backfire?

An explosion in the air intake systems or exhaust will have a cool effect on your car. Heck, a roaring car with smoke and flames on its back gives your car a drag-racing-beast kind of look.

As much as backfiring a car is awesome, it’s also very dangerous. One false move could get you and your car seriously injured.

That said, if you’re looking to backfire a modern car, you should first realize that some of them backfire on purpose during deceleration time. Either way, if it’s a model after 1990, it may need some adjusting on the chassis or ECU before you can backfire it.

If your car model has a port with a Flash Tune Kit hooked up to it, install new ECU software to modify it directly. The software will alter the rates and times in which the fuel is injected.

Lastly, you need to gain access to the injection rates in the ECU and change them. To be successful, you must have great knowledge of your vehicle’s specifications. It’s important to know what engine RPM you want for your car to begin backfiring.

For flames, you need to input a higher number for a certain RPM. For a pop and roar of a backfire, an RPM that cuts all fuel will be in order.

Can Bad Spark Plugs Cause Backfire?

Yes, bad spark plugs can cause backfire. Spark plugs supply the spark that lights the air/fuel combination, making the explosion which causes your engine to produce power.

The plugs, and the timing and electrical apparatus that power them are part of the ignition system.

Can A Car Backfire While Driving?

A car can backfire while driving as long as the engine injects more fuel into its cylinder than can be burned off during combustion.

When this occurs, the unburnt air and fuel combination can be ignited in the exhaust chamber, and shoot out of your vehicle through the tailpipe. This can also lead to flames shooting out of the exhaust pipe.

Is Backfire Bad For Your Car?

Backfire is bad for your car, especially if it’s regular. An engine backfire happens when the air/fuel mixture in your car combusts somewhere outside the engine’s cylinders. If left unchecked, it can cause harm to your vehicle’s intake or exhaust.

Damage to the exhaust or intake means that your car’s engine is making less power than it should, and is wasting plenty of fuel in the process.

How Do You Stop A Car From Backfiring?

The first thing to do to stop a car from backfiring is check your spark plugs and clean them.

Next, ensure that your exhaust system is healthy. Backfiring is a hint that the system is either approaching the end of its service or not functioning properly.

Backfiring cars are the latest talk of the town. Some think they are awesome, but others figure they are dangerous. Whichever side you stand, please be safe whenever dealing with a backfiring vehicle.

If you have no clue how to fix it, do not risk your precious life by trying. Instead, get help from the right people. Use the information in this post to identify a problem before it gets worse.

Hopefully, this post helps to troubleshoot and understand backfiring. Come back again, so we can answer your next burning question about cars!