Faulty head gaskets can lead to a series of different problems, each of which can spell bad news for vehicle owners. But there are remedies. You might have heard that head gasket sealers keep the engine from overheating and sustaining damage. We researched this method in depth so that you'll know if it works for this issue.

If properly applied, a head gasket sealer will successfully stop your vehicle's engine from overheating. Its effectiveness will depend on the size and scope of the leak, however.

Now that we know that the head gasket sealer will stop overheating, we'll look at how this process works. You might also be wondering if head gasket sealers are a permanent fix or how long a head gasket seal will usually last. For the answers to these questions and more, read on and see what our research has discovered.

How head gasket sealers work and when to use them

An engine's head gasket isn't a part that you probably pay much attention to. That is until there is an issue with it. This layer rests between the cylinder heads and the engine block and serves two important purposes. 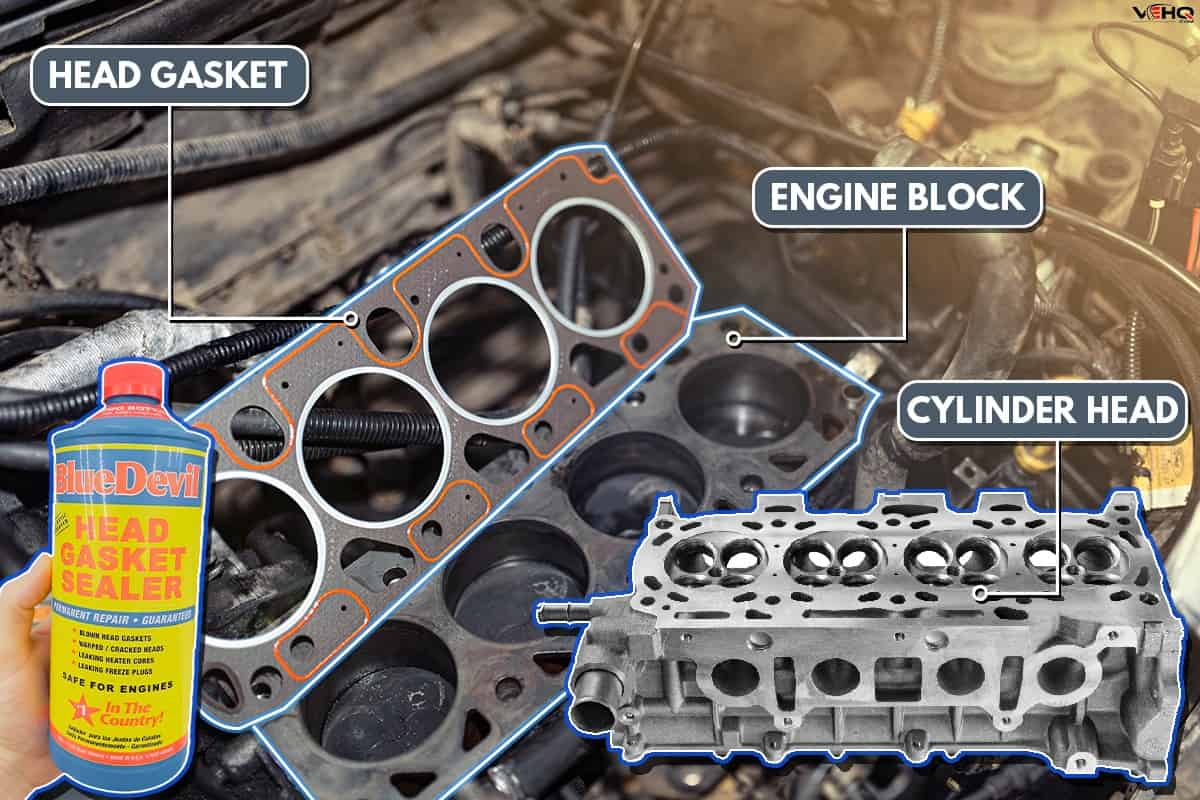 A head gasket keeps the right amount of compression inside the engine. Just as importantly, it also prevents oil and engine coolant from leaking into the cylinders. At the first signs of a head gasket leak, the problem should be remedied as soon as possible.

Delays can be costly

Slow leaks from the head gasket can usually be fixed. This needs to be done before the problem progresses and the head gasket is blown. Repairing a blown head gasket requires a lot of labor and time and can take a lot from your wallet.

There will be several signs that your head gasket is leaking. White smoke coming from under your hood is a telltale sign. This means that coolant is burning off due to it leaking into a cylinder.

Your vehicle might be overheating as well. If not enough coolant is circulating inside the engine, the engine will get too hot. Additionally, the engine might be misfiring, the result of the compression being decreased from the leak.

Fixing a leaking head gasket is quick and inexpensive

Head gasket sealant can be purchased at any automotive supply store. This liquid is poured into your radiator while the engine is running. Keep the engine going for at least 15 to 20 minutes, making sure that the heater and fans are all on high inside the vehicle.

This will give the sealer enough time to seep into the worn spots in the head gasket. The amount of this sealant you use will depend on the size of your engine.

Know that this is meant to be a temporary fix. Over time, the leaks may occur again and new sealant will have to be utilized. The best way to fix a leaking head gasket is to just get it replaced, but the high cost of this makes the sealant a viable alternative. 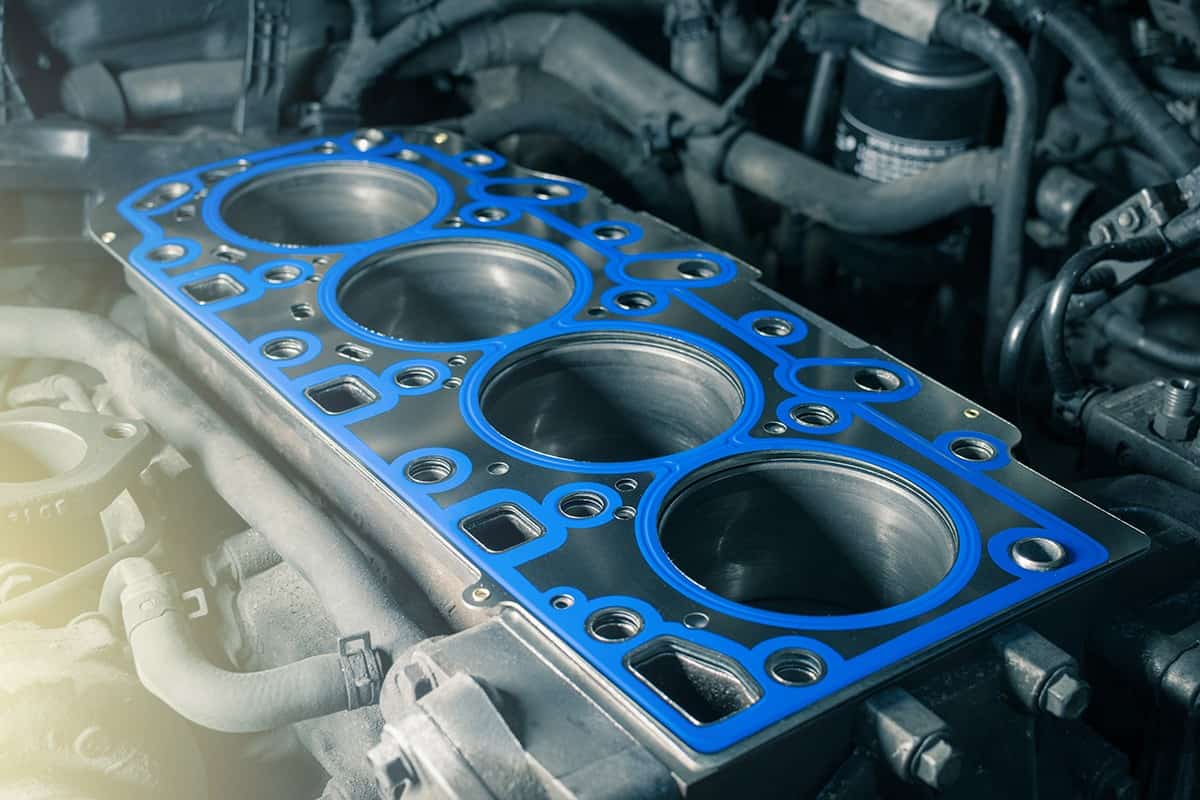 You might hope that pouring this sealer into your radiator will magically solve the problem behind your leak. Unfortunately, this method is only a temporary solution to the problem.

On average, a head gasket sealer will last six months before signs of a head gasket leak begin to appear again. At this point, you will need to decide if you want to go this route again or get the head gasket replaced. Though this method does work in most cases of small leaks, it's not always the best route to take.

Head gasket sealers don't always work, leading you to replace the part anyway. Using too much of this sealer can also cause damage to the engine over time. So proceed with caution and don't count on it to be a permanent solution to your problem.

How long will a head gasket seal last? 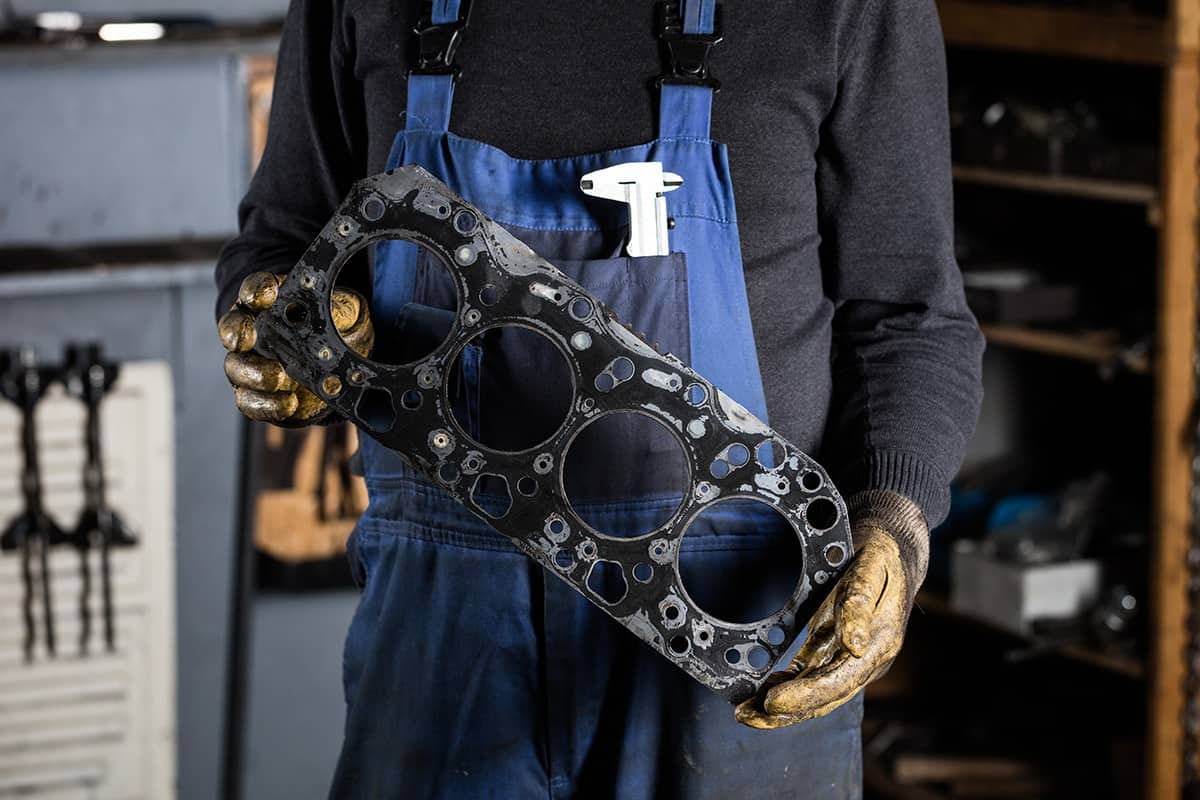 When you discover how much it can cost to replace a head gasket, you'll probably hope that it is something that never needs to be replaced. Like all parts, they do have a shelf life, however. But so long as you take care of your vehicle, a head gasket replacement isn't normally something you'd need to do.

Head gaskets are engineered to last as long as the engine. While defects are known to happen from time to time, this is fairly rare in modern vehicles.

But you will need to make sure that you are taking care of your engine for the head gasket to last this long. Vehicles that overheat, run on low oil, or are otherwise abused will have a lot of damage done to the many gaskets that are under the hood. Maintain your vehicle so that you can avoid ever having to replace this costly part.

What does a car sound like with a blown head gasket? 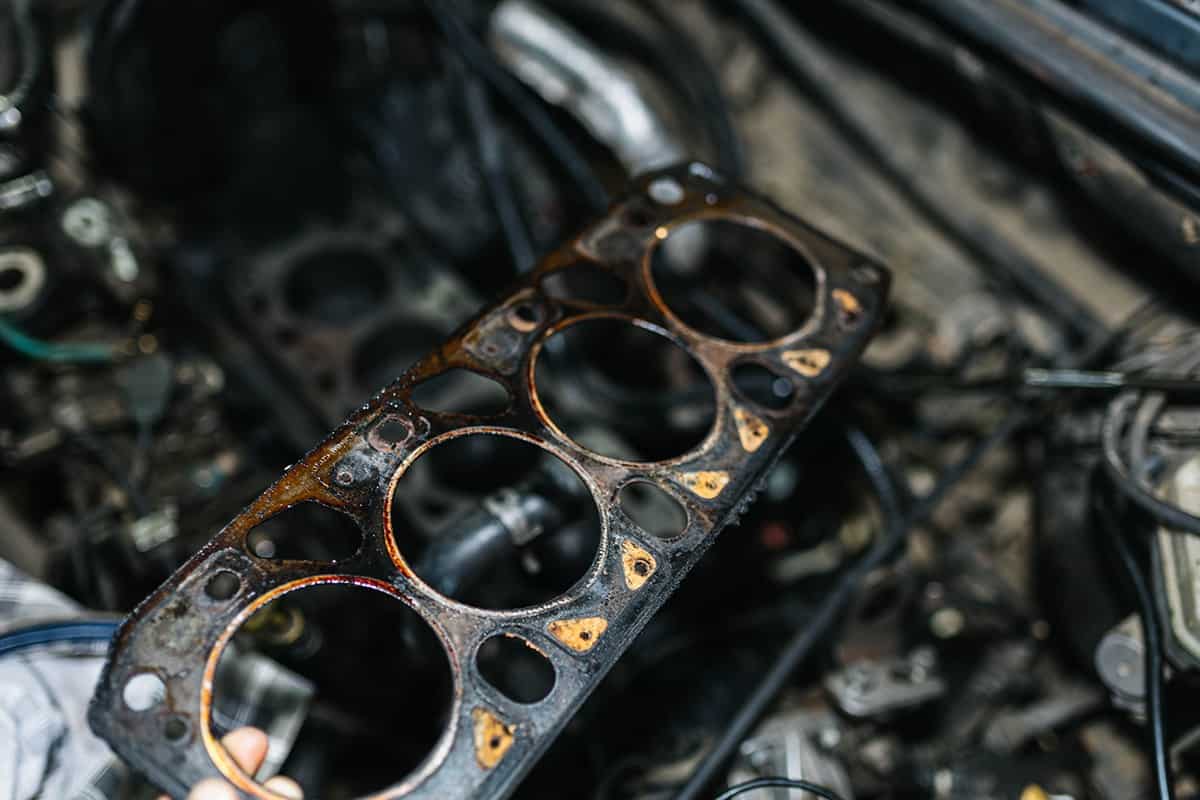 Earlier in this post, we covered some of the physical symptoms of a blown head gasket. But along with the white smoke and engine misfires, there are certain sounds that you can be looking for that will indicate that your head gasket is leaking or blown entirely.

Recall that the job of the head gasket is to prevent oil and coolant from seeping into the cylinders. It also works to keep a certain level of compression inside the engine. When this seal is compromised, there will be a hissing sound that you will most likely notice.

The hissing sound is from liquids burning off on surfaces that they aren't meant to touch. You might also hear a high-pitched whining sound, or the sound of metal on metal if the head gasket has fully blown while the engine is running.

What happens if the head gasket blows while you're driving?

If your head gasket is going to give way, you hope that it blows after you've pulled safely into your driveway or garage. But parts don't wear out when it's most convenient for us, unfortunately. Often times, the head gasket will blow while you're out driving the vehicle and put your engine in jeopardy of damage.

When the seal between the cylinder heads and the engine block is blown, coolant and oil will immediately pour into the engine's cylinders. Compression is lost as well, which quickly diminishes the engine's performance.

The engine will begin to overheat, as it is not getting enough coolant. The loss of compression may cause the engine to turn off as well. Know that blown head gaskets are serious issues and that it is critical to pull over as soon as possible and turn your engine off to avoid further damage. 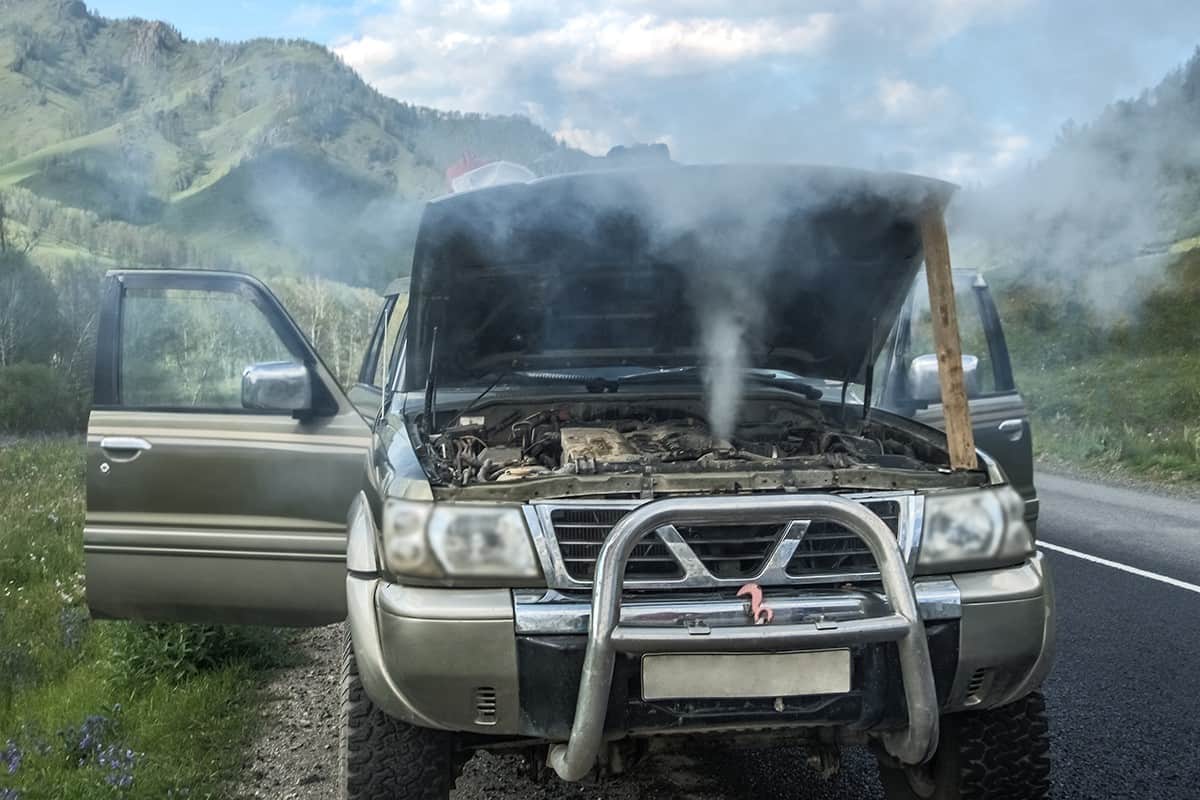 Does a blown head gasket mean that I need a new engine?

Whenever your vehicle makes hissing and grinding noises and the engine shuts off on its own, the first thought might be surrounding just how much this is going to cost to fix.

In the case of a blown head gasket, it can take upwards of $2,000 to replace. And just because the gasket was blown doesn't mean that the engine is destroyed.

The oil and coolant that have invaded the cylinders aren't a good thing. But it's something that can be remedied by a mechanic. As long as excess heat hasn't warped the pistons or cracked the engine block, the engine is usually salvageable.

But there will be instances where a blown head gasket will mean that your engine has suffered too much damage to be repaired. This will mean replacing the engine entirely or being forced to get a different vehicle.

Head gasket sealer is an inexpensive way to repair minor head gasket leaks. While this can keep a costly head gasket replacement at bay, the sealer is only a temporary solution and might not even work at all. Take care of your vehicle and your head gasket should last you as long as the engine. Drive safe!

We're glad you made it this far! We hope this post answered all your questions. For more helpful information, we suggest reading the following posts:

Car Running Hot But Not Overheating – What Could Be Wrong?

Head Gasket: Which Side Is Up? What Happens If It Is Installed Backwards?