So you're considering replacing your F250's tailgate because it's damaged, or maybe just for the heck of it. And you are thinking of placing an F150 as the new replacement tailgate, but will it actually fit? We researched this topic thoroughly, and this is what we found out.

Scrapping parts from an F150 to your F250 is possible, particularly the tailgate. This is more common in older models. Most of the time, if both F150 and F250 share the same year model and the same truck bed size, their tailgate will be swappable.

We have a lot to unpack here, so continue reading as we dive in deeper into the topic. Additional questions such as available bed sizes, differences between the F-series line-up, buying a new Ford tailgate, and many more will be discussed below. We will also suggest some interesting and very informative topics at the end of this post. What are you waiting for? Let's start! 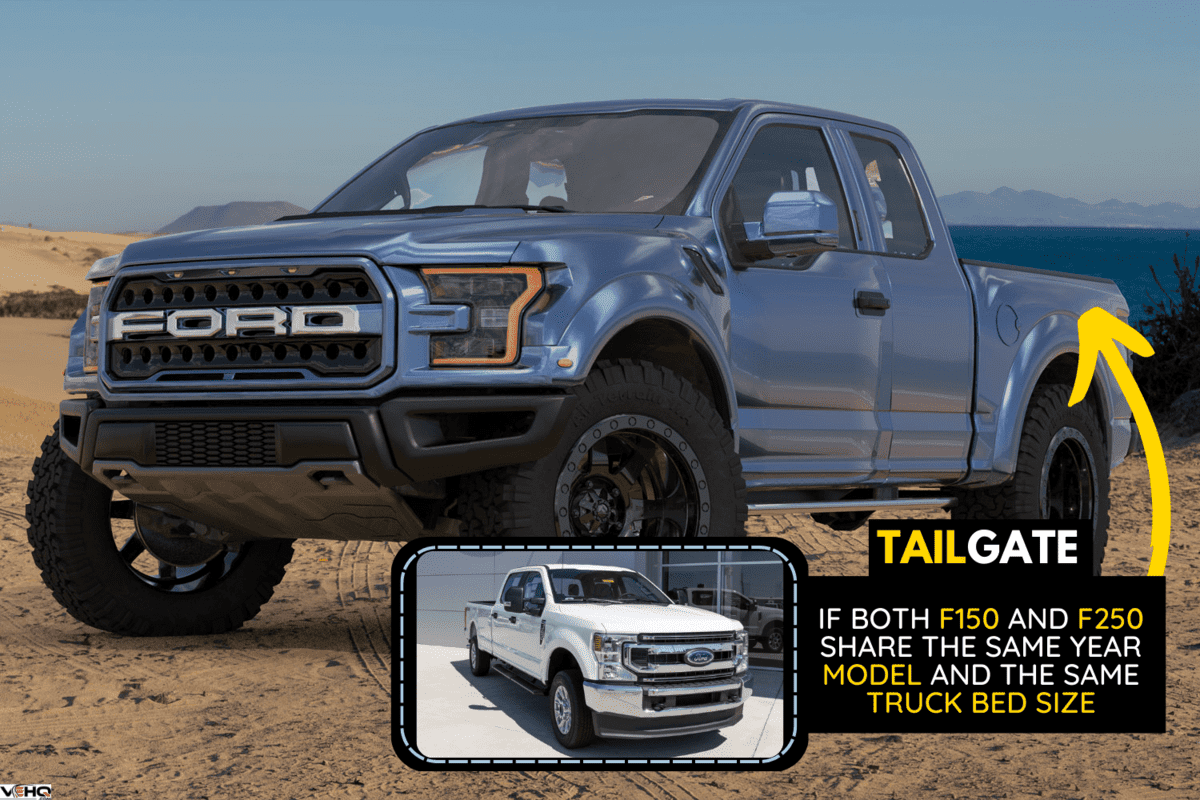 If you're thinking of swapping an F150 tailgate for an F250, you should remember that if both the trucks are the same model year, there's a big chance of compatibility. A good example is the 10th series from 1997-2004. F150 and F250 tailgates from this series can be interchanged. 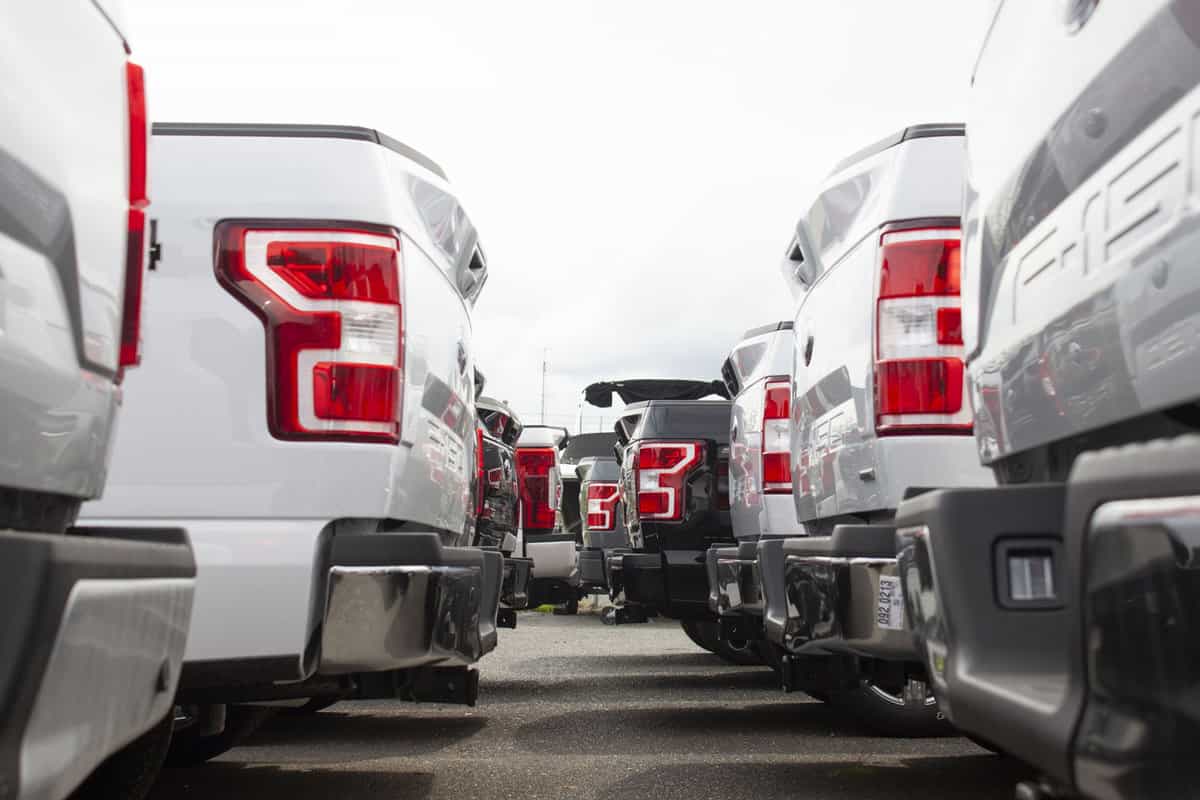 It is also noteworthy that a relatively newer model truck will not fit a tailgate from an old truck. Another thing you should consider is the power tailgate. You might have some problems with using your power tailgate, specifically if the replacement tailgate comes from a non-power one. You might not even be able to use it at all.

However, this would only be a problem if you have a Limited, as this comes stock with the trim. For the other trims (Lariat, King Ranch, Platinum XL, and XLT), this only comes as an option.

The great thing about Ford trucks is that they continue to be the best-selling truck in America and have been so for the past four decades. Because of this, surplus parts will not be that hard to find. Although there have been some shortages of brand-new replacement parts due to the pandemic, stocked supplies are slowly returning.

Luckily, for the F250, tailgate problems are not included in the reported most common problems for the vehicle. This means that going for a tailgate swap in an F250 due to a factory defect is highly unlikely. We advise you to practice caution, especially while backing up in places, to avoid dings on your rear bumper and damage to your tailgate.

The cab of both trucks are nearly identical and only have marginal differences between them. After all, the thing that really separates these trucks are the power output of their engines. When it comes to interior features and cab dimensions, you can expect almost the same designs.

Here is a quick rundown of some key differences between the two trucks.

As you can see here, when it comes to length and height, the two trucks are fairly similar. In the interior, the two trucks have identical leg- and headroom. Their biggest diffrence comes in width. The F250 will naturally require a wider body to accomodate for more space in the engine bay for a bigger engine. 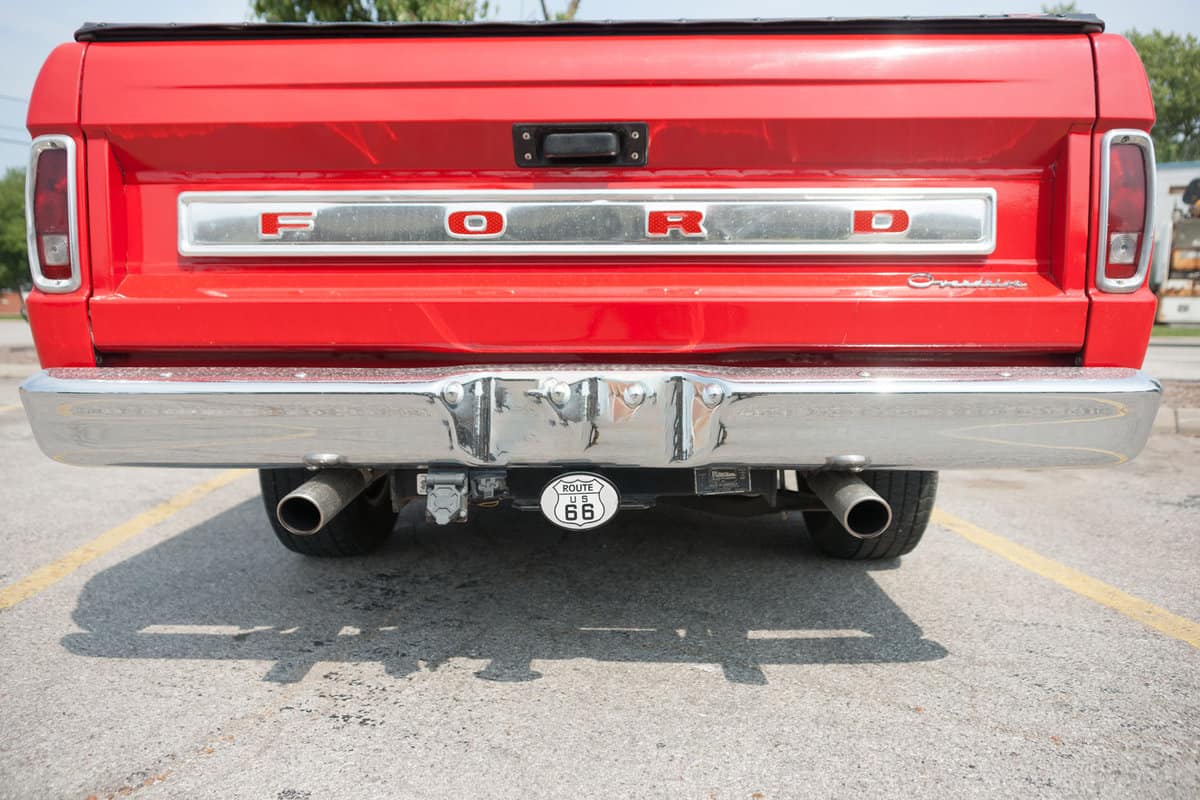 F250 truck beds between 1990 and 2016 will have a relatively similar truck bed and, therefore, could be used interchangeably. However, for newer models, you might have some problems with compatibility due to changes in shape and manufacturing materials.

With that in mind, it is best to remember that the compatibility is with the entire truckbed and not just the tailgate. You can have a compatible truckbed as the mountings on the truck frame would be similar, but the tailgates' mounting points and sizes can vary from model to model, making them a bit trickier to pair.

The main difference (between the F150, F250, and F350) is their capacity and engine power. The F350 is rated to do more heavy-duty work compared to the other two trucks. The following statements are true for all truck brands, not just the Ford line-up.

As the rating of the truck increases (i.e., half-ton, quarter-ton, one-ton), its payload capacity, hauling capacity, torque, and engine displacement also increase. This means that as the truck gets bigger and heavier, it comes with a more powerful engine.

Below the F-series truck ratings:

This also applies to the Ram truck line-up and both the GMC Sierra and Chevy Silverado.

Initially, car manufacturers categorize these trucks as either half-ton, quarter-ton, or one-ton based on the rating of their payload. This means if it is classified as a half-ton truck, it has a maximum capacity of hauling at least a ton of cargo.

But as technology improves, these ratings have become moot, as half-ton trucks can carry and tow significantly more than a ton of cargo. Even compact pickup trucks are now rated to haul over three tons of cargo. But these namesakes have stuck due to their familiarity.

How much for a Ford tailgate replacement?

A Ford tailgate replacement cost will range between $100 and $500. This estimate is not absolute, as it will depend on where you get the replacement and the type of replacement. You will also have to consider the labor, or you could simply DIY to save a few bucks.

Just make sure that the tailgate will fit your truck before purchasing it. Getting the dimensions of your original tailgate and checking the clamping points is one way of ensuring compatibility.

Better yet, look for the exact model of tailgate your truck originally had. For newer trucks, surplus or extra tailgates might be a bit harder to find as most of the trucks are still new and in good shape.

Where should I look for Ford tailgate replacements?

You can check your local dealerships, auto repair shops, and even local junkyard. You might also find deals online on eBay and also Craigslist. But we advise that for best results, see the item in person first.

Another option you could do is go to a repair shop or a machine shop. Have them check your tailgate; it might not even need replacing in the first place. If some latch or locking system is broken, this can easily be fixed by a mechanic.

An auto shop could also reshape bent tailgates to their original state. Have a professional look at your tailgate before replacing it, as this could save you more time, energy, and money.

Can you swap tailgates from different brands? 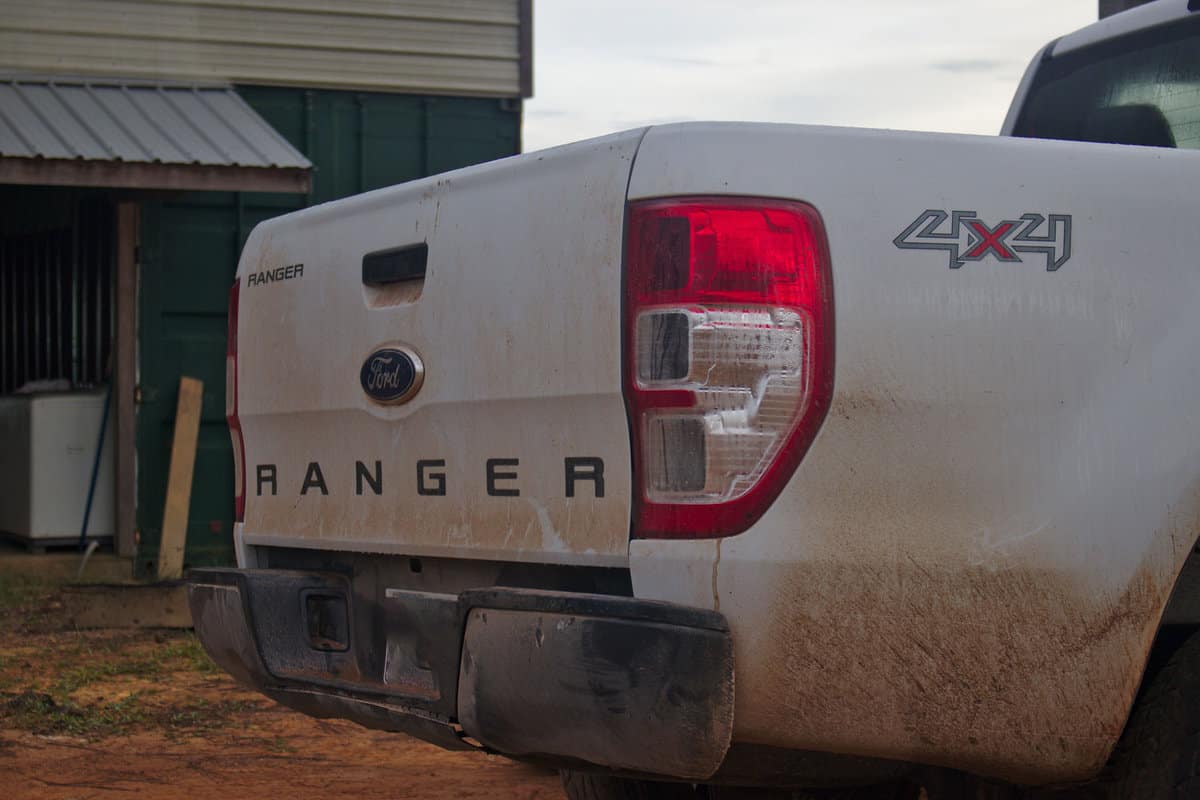 In general, you will have difficulty fitting the tailgate of one brand into another. Although, GMC and Chevy trucks can interchange tailgates because one manufacturer builds both in the same plant using the same materials and frame designs.

But when it comes to putting a Toyota tailgate into a Ford one or a Ram tailgate into a Chevy Silverado, you will have problems, and it will probably not work. They are differently designed and built by different manufacturers.

Here's A Quick Recap Of What We Learned 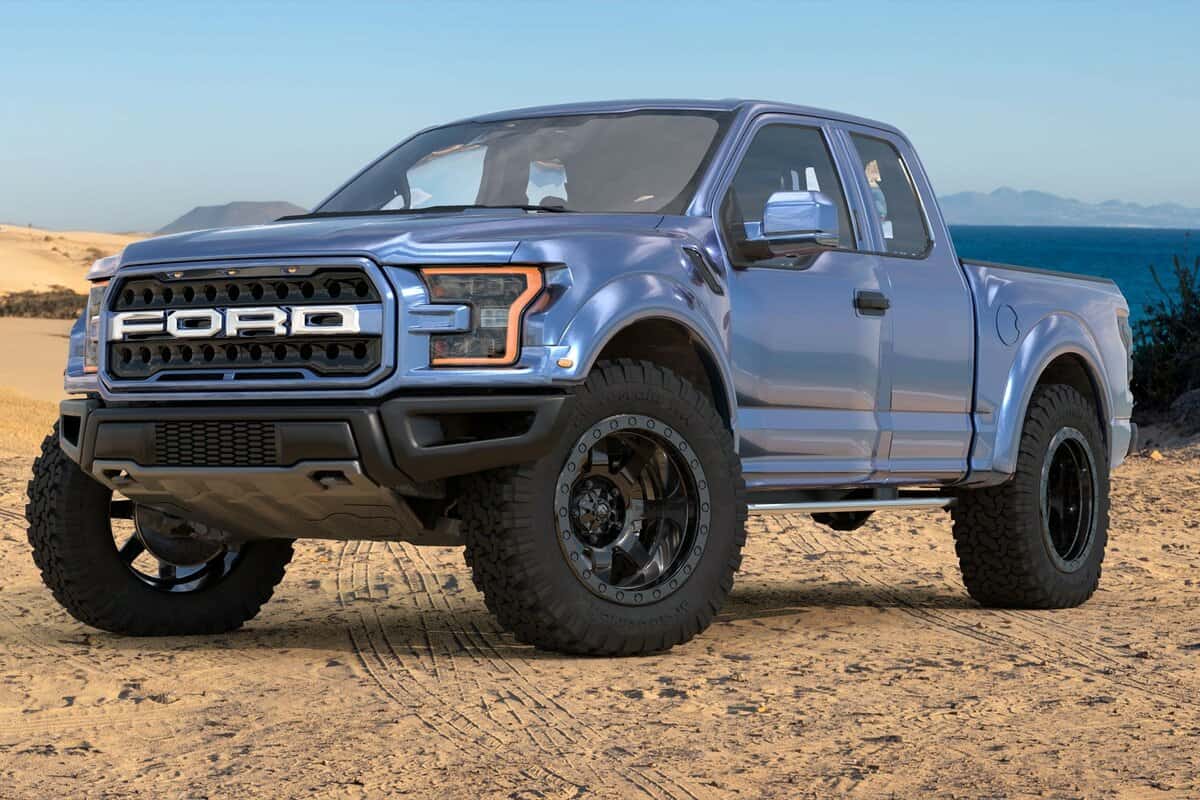 You can swap an F150 tailgate for an F250 tailgate as long as they are of the same model year. Some F-series same generation trucks will have interchangeable tailgates, like the 10th series (1997-2004). The great thing is that surplus parts are abundant for Ford trucks since they are the best-selling vehicle in the United States.

We hope that we have satisfied your questions about your Ford tailgate. Do you have any more vehicle-related concerns, particularly about the F-series line-up of Ford? Check out some of our previously written articles below!

Ford F-150 King Ranch Vs Platinum: What Are The Differences?