An RV is a great thing to have if you like to have the comforts of home while you’re on the road or spending time out in nature. RVs can make camping a real treat, but just how many people can ride in an RV? We researched the regulations on this topic so you can follow the letter of the law when you are going off-grid.

You will find that the rule about passengers in an RV relating to the number of available seat belts is reasonably standard. However, each state has its own set of laws regarding who has to be wearing seat belts and when. In this post, we will explore the passenger rules and capacities for each type of RV. 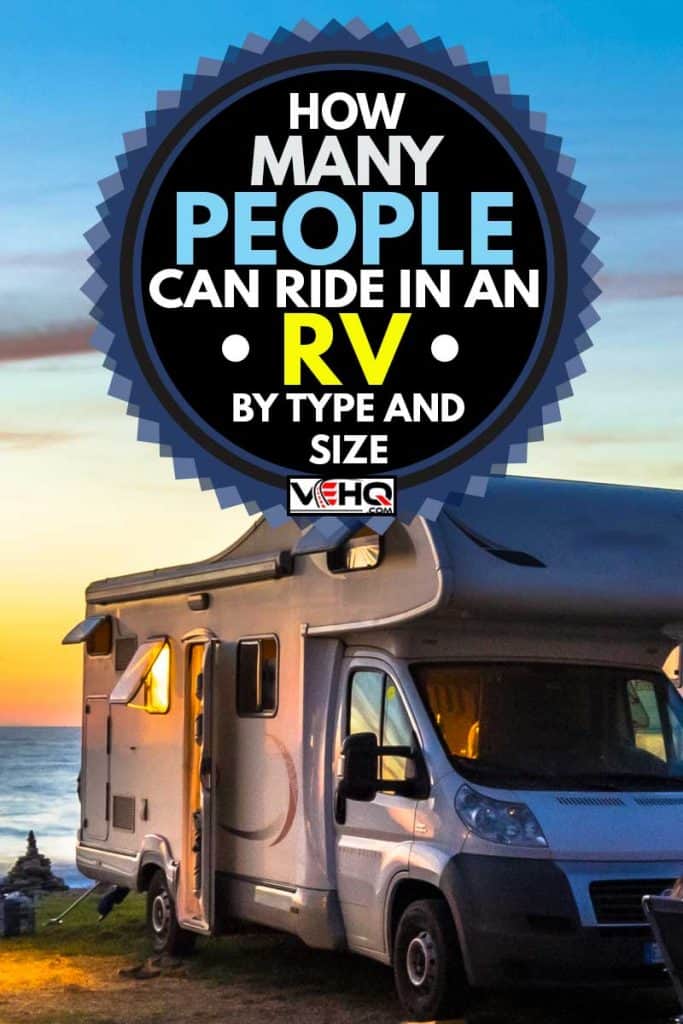 How do the Rules Vary From State to State?

This information is pretty important when trying to determine how many people can legally ride in your RV. As a rule of thumb, you should err on the side of caution. Make sure that all passengers have an appropriate seat belt.

Some states have rules exempting seat belt laws for vehicles older than a particular year. This is because seat belt laws have evolved and developed over time. In the past, there were no laws requiring seat belts in the rear of many vehicles. For example, in Alabama, there is a seat belt exemption for RVs made before 1965. In Arizona, 1972 is the cutoff year for exceptions. Many other states don’t have an exemption for older RVs at all.

Be sure to familiarize yourself with the laws in your state, and for any additional states that you plan to travel in. You will notice that there are some pretty significant differences in the laws from state to state.

A Class A RV is one of the more significant types of RVs that you will see on the road. These RVs are based on bus chassis, and usually have a pretty extensive list of amenities. Class A RVs often have pop-outs that can expand the square footage of their interior space by quite a bit. To give you an idea, check out this Coachmen Pursuit Class A RV.

Class A RVs come in many different floor plans and configurations, and can typically sleep, 4-8 people. Ample living space makes them the ideal travel vehicle for a medium or large-sized family. However, as we’ve stated above, it doesn’t matter how many people the RV can comfortably sleep. The number of people who can ride in the RV is limited to the number of seat belts. Newer Class A RVs will often have eight or more seat belts, but don’t be surprised if older models only have a few.

Based on van chassis, Class B RVs are the smallest of the three RV classes, and they RVs sacrifice a lot of seating space to house amenities. These RVs are not usually equipped with pop-outs or storage compartments under the passenger area. As a result of this, they have less dedicated interior space for people to move around in. The interior footprint of a class B RV is often more focused around maximizing creature comforts for just a few people rather than housing a whole family. Check out this example of a Winnebago Solis Class B RV.

Depending on the floor plan, a class B RV can typically sleep 2-6 people. However, you may only be able to carry a total of 4 people, including the driver.

A Class C RV is based on a truck chassis and is similar in size to a Class A RV. Given its same footprint, and a vast array of floor plan options, a class C RV can usually transport 4-8 people, depending on the number of seatbelts. Take a look at this Class C RV by Concord for an example of a typical floor plan.

So far, we’ve talked a lot about how many people can ride in RVs. What about towable trailers like a 5th wheel or a travel trailer?

In most states, it is not legal to have people riding in a towable trailer. There are a few exceptions to this, but the consensus is that you should not do this for a variety of safety reasons. Class A, B, and C RVs are very different from towable trailers. In an RV, the living space of the RV connects to the cab space of the vehicle where the driver is. This is not the case for towable trailers, and it creates some safety concerns.

To learn more about the different types of RVs, check out our post, 7 Types of RVs You Simply Must Know.

Can You Add Seat Belts to an RV?

Another primary concern involves car seats for children. Depending upon state laws, children must be in appropriate car seats or booster seats. Also, it is usually required that these child seats be installed in a front-facing position.

So, what do you do if your RV doesn’t meet current seat belt requirements?

Thankfully, it is possible to install additional seat belts in your RV. Remember, RVs are hugely customizable. There are many aftermarket RV seat belt options available if you feel like it’s a project you are comfortable taking on. If not, your local RV dealer may be able to install them or point in the direction of someone who can.

Can You Sleep or Use the Bathroom in a Moving RV?

RV trips often involve being on the road for a long time. Sometimes it’s tempting to use the bathroom or lie down for a nap. Getting up to use the bathroom, and otherwise moving around, is ok on a train, bus, or airplane. What about in an RV?

Again, the short answer is that it depends. Each state has slightly different laws on this topic. In some states, it is perfectly acceptable to get up and move around freely in the RV while it is in motion. Other states strictly prohibit it. For safety reasons, you should not do a lot of moving around while the RV is in motion, but it’s not flat out illegal everywhere.

For a more in-depth look at moving around in an RV while in motion, check our post on that here.

Each state has different laws about what is and isn’t legal in regards to people riding in RVs. It is best to make sure that each person riding in the RV has a seat belt available for them to use for the full duration of the trip. Legality issues aside, wearing a seat belt is the best way to be safe while riding inside a moving vehicle. Stay safe out there!