Accidentally parking your car under oak trees can result in acorns falling and denting your car's roof, hood, and trunk. In the unfortunate circumstance this happens, how can you remove the acorn dents? Let's take a look at the best course of action below.

If you have dents in your car from acorns, then it is best to have a professional fix it. If the dents aren't too bad, then paintless dent repair may be the best option. However, if the dents are bigger or more severe, then you will likely need autobody repair. 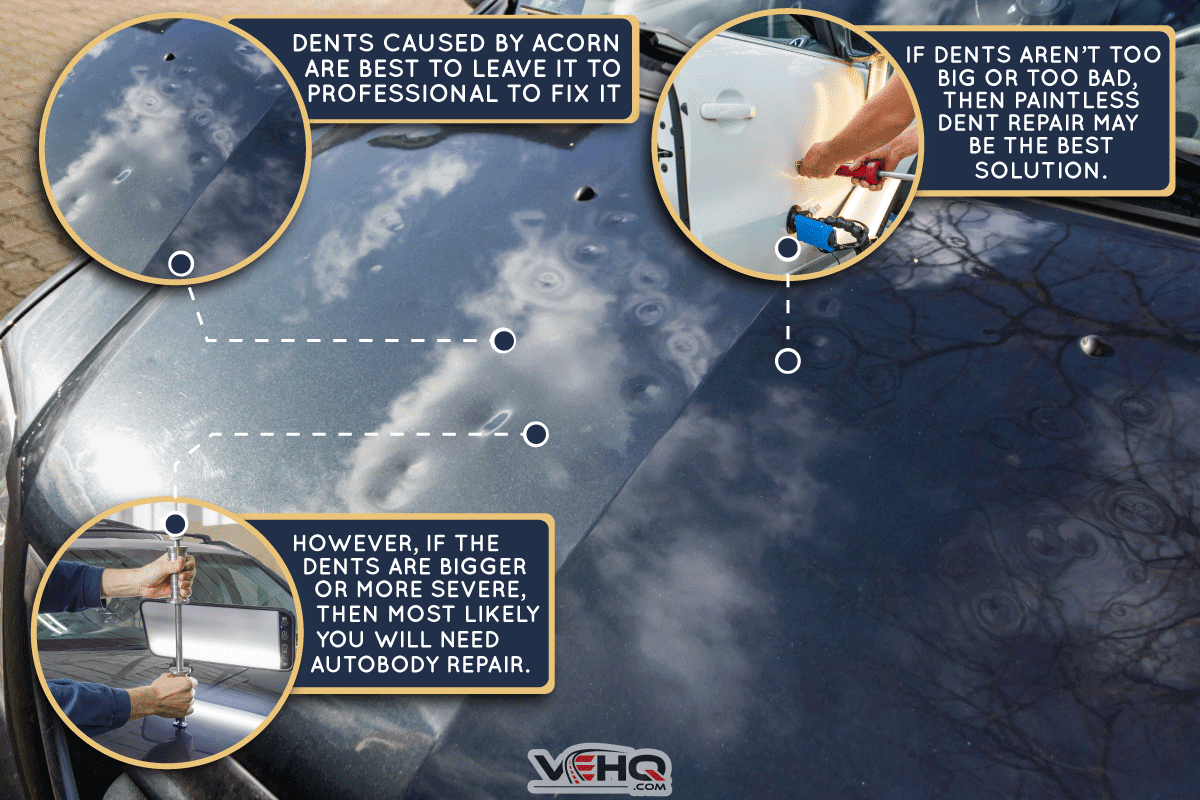 What's The Best Way To Remove Acorn Dents From A Car?

While you might think parking under a tree is a great way to keep your car cool in the summer, it's not worth the risk of acorns damaging your car.

For example, if you didn't notice you parked under an oak tree and acorns started falling, then you could come back to your car to find dents all over the roof, hood, and trunk.

The reason being is that dents are difficult to remove on your own. Not only do you need the right equipment but you also need to know what you're doing in order to avoid making the dent worse.

Therefore, we recommend taking your car to a professional who can remove the dents for you. This way, you don't have to worry about doing it yourself and potentially making the problem worse.

Let's take a look at the two best options for removing acorn dents from your car. 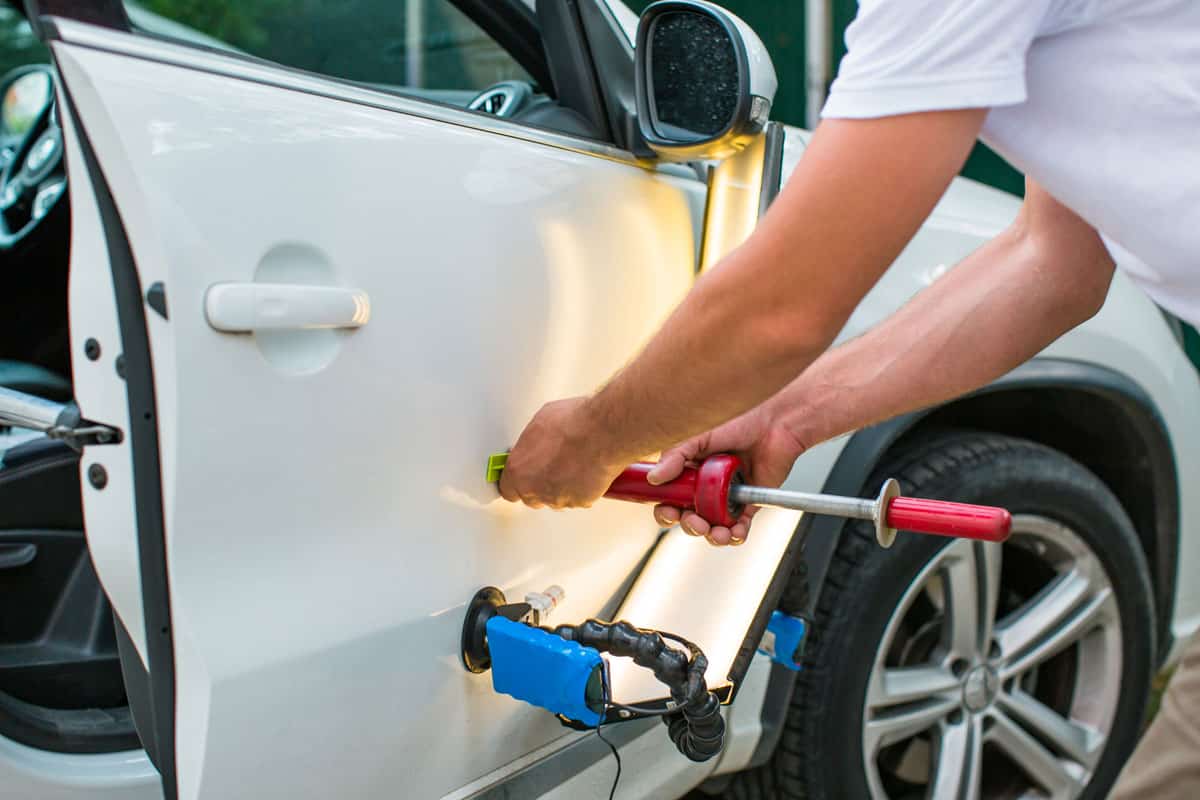 Paintless dent repair is a process where the dent is removed without having to sand, paint, or fill the area. This is done by using special tools to push the dent out from the inside. The great thing about this method is that it doesn't damage the paint on your car.

In addition, it's a lot cheaper than traditional methods because you don't have to pay for new paint or materials. The only downside is that it can be time consuming, so you might have to leave your car at the shop for a few hours.

However, if you're looking for a cheaper and more convenient option, then paintless dent repair is the way to go.

You would use paintless dent repair when the dents are minuscule. This means that the dent is smaller than a quarter and there is no paint damage. If any of these two things are not the case, then you will likely need autobody repair.

How Much Is Paintless Dent Repair?

The total cost to repair dents caused by acorns or hail can vary widely. While paintless dent repair is usually cheaper, it all depends on the size and severity of the damage.

In general, you can expect to pay $75-250 for paintless dent repair. However, if the damage is extensive, then it could cost more.

So, if you have multiple dents, then the repair bill will be higher. Some paintless dent repair companies will charge a flat fee for the first dent and then a lower rate for each additional dent.

As mentioned earlier, your best option is to get an estimate from a few different companies. This way, you can compare prices and find the best deal.

In the case that the acorns caused the paint to crack or chip, then you will need autobody repair. This is a more traditional method where the damaged area is sanded down and then filled with putty. After the putty dries, it is then painted to match the rest of the car.

While this method is more expensive and time consuming, it is necessary when the paint is damaged. In addition, autobody repair is usually used for bigger dents.

So, if you have a dent that is bigger than a quarter or the paint is cracked or chipped, then you will need autobody repair.

The best thing to do is to get an opinion from a paintless repair expert first. Then, if they can't do it, you know that autobody repair is your only option.

What Happens If You Don't Fix A Car Dent?

While it's not uncommon for vehicles to have dents, it's important to get them fixed as soon as possible. If you don't, then the dent can become worse over time. In addition, if the paint is cracked or chipped, then water can get inside, and rust will start to form.

When rust forms, it will eat away at the metal, and eventually, the dent will become a hole. Not only is this unsightly but it can also be dangerous because it weakens the structure of your car.

In addition, dents will lower the value of your car. So, if you're thinking of selling it or trading it in, then you will get less money for it because of the damage.

Therefore, it's important to get dents fixed as soon as possible. The longer you wait, the worse they will become, and the more expensive they will be to repair. 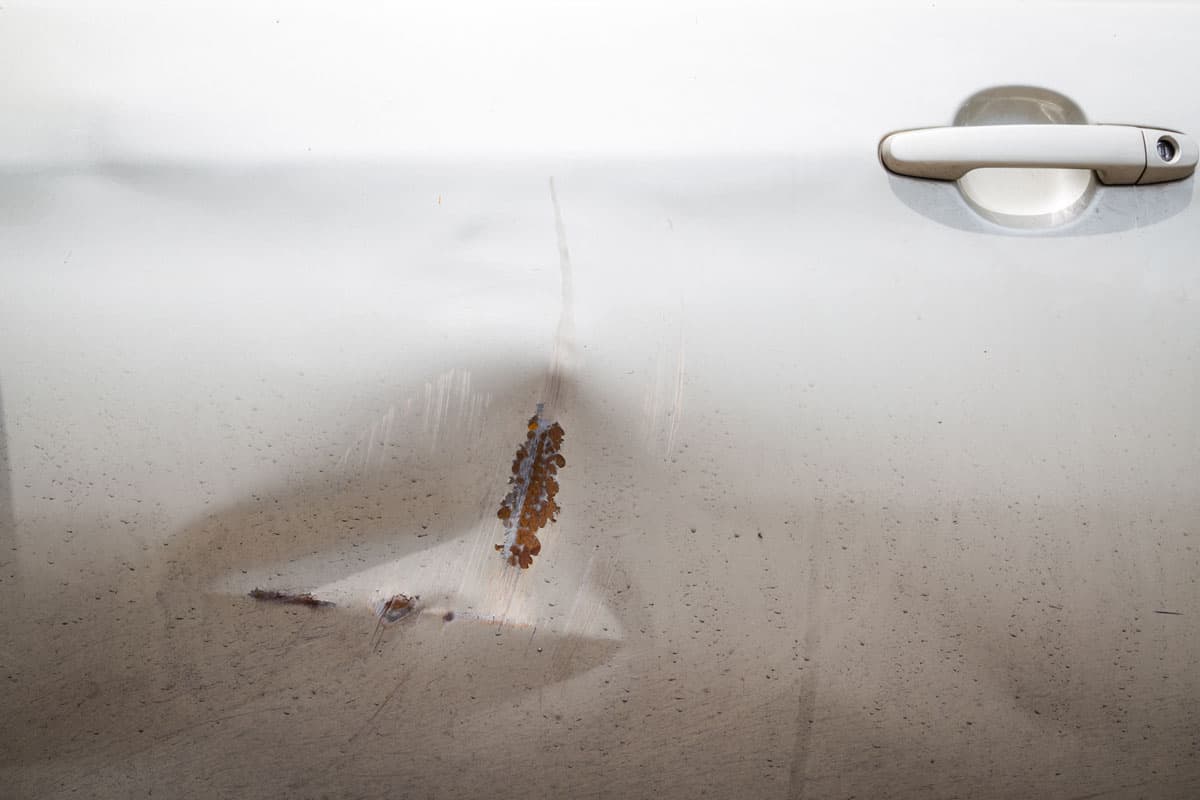 Will Insurance Cover Dents From Acorns?

Depending on your insurance policy, you might be covered for acorn damage. If you have comprehensive coverage, then you might be able to get the dents repaired without having to pay anything out of pocket.

However, if you only have liability coverage, then you likely won't be covered for any damage caused by acorns. It only makes sense to make an insurance claim if the damage is significant and you have comprehensive coverage.

The reason being is that you will have to pay a deductible, and your rate could go up. So, unless the damage is extensive, it's not worth making a claim. You're better off just paying for the repairs yourself.

One popular method for removing smaller dents is to use dry ice. This involves placing a piece of dry ice on the dent and then waiting for it to contract. As the metal cools, it will contract and eventually pop the dent out. While this method can be effective, it's not always reliable.

If you do try this method at home, make sure you wear gloves. The dry ice can cause burns if it comes into direct contact with your skin. In addition, you need to wrap the dry ice in a microfiber towel. This will help to prevent the dry ice from cracking the paint.

You should also only use this method on smaller dents. More than likely, on deeper dents, the ice will not be able to reach the back of the dent. So, while dry ice can work on smaller dents, it's not always effective. 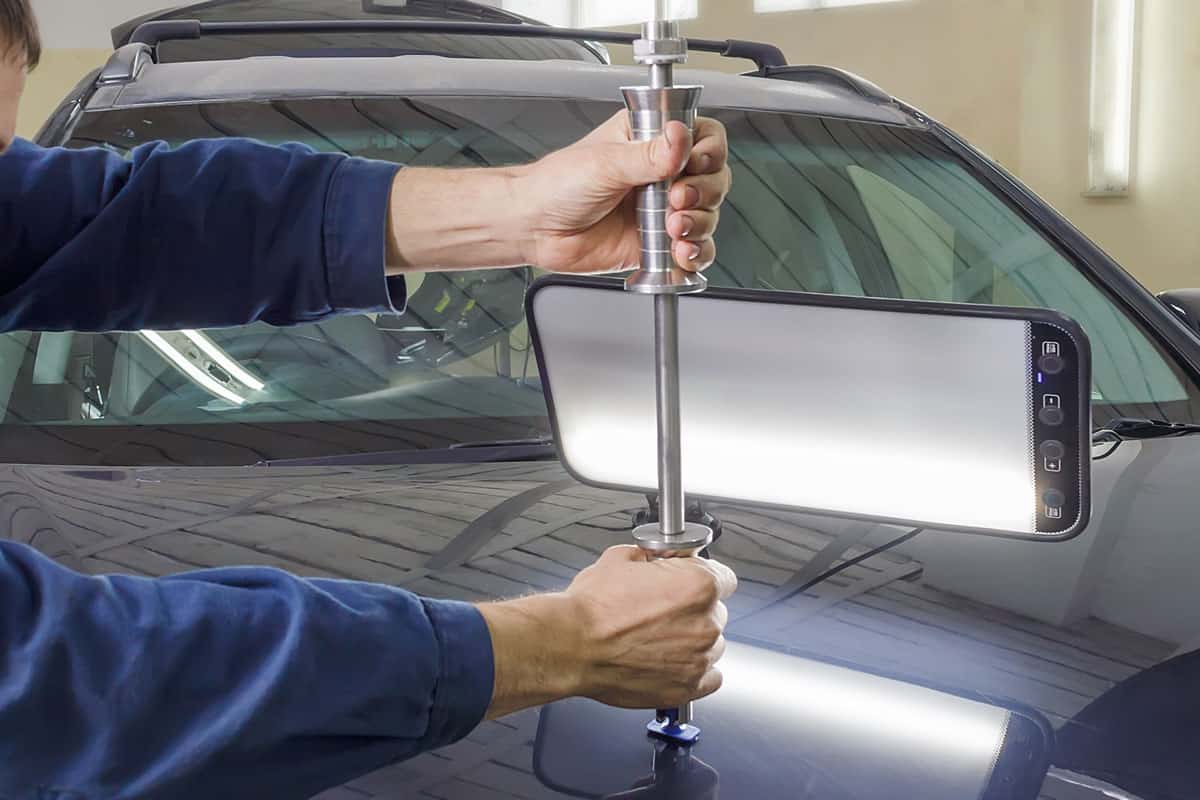 Will Heat Pop Out Car Dents?

If you notice dents on your car after a hailstorm or after parking under a tree, then you might be wondering if you can use heat to remove them.

One method that some people try is to use a hair dryer. They turn the hair dryer on high and hold it over the dent for several minutes.

The idea is that the heat will cause the metal to expand and eventually pop the dent out. Unfortunately, this method is not effective.

The heat from a hair dryer is not intense enough to make a difference. You can also try this method while letting your car sit in the sun for a while. It's worth a try before taking it to a professional, but don't expect miracles.

Can A Plunger Remove Car Dents? 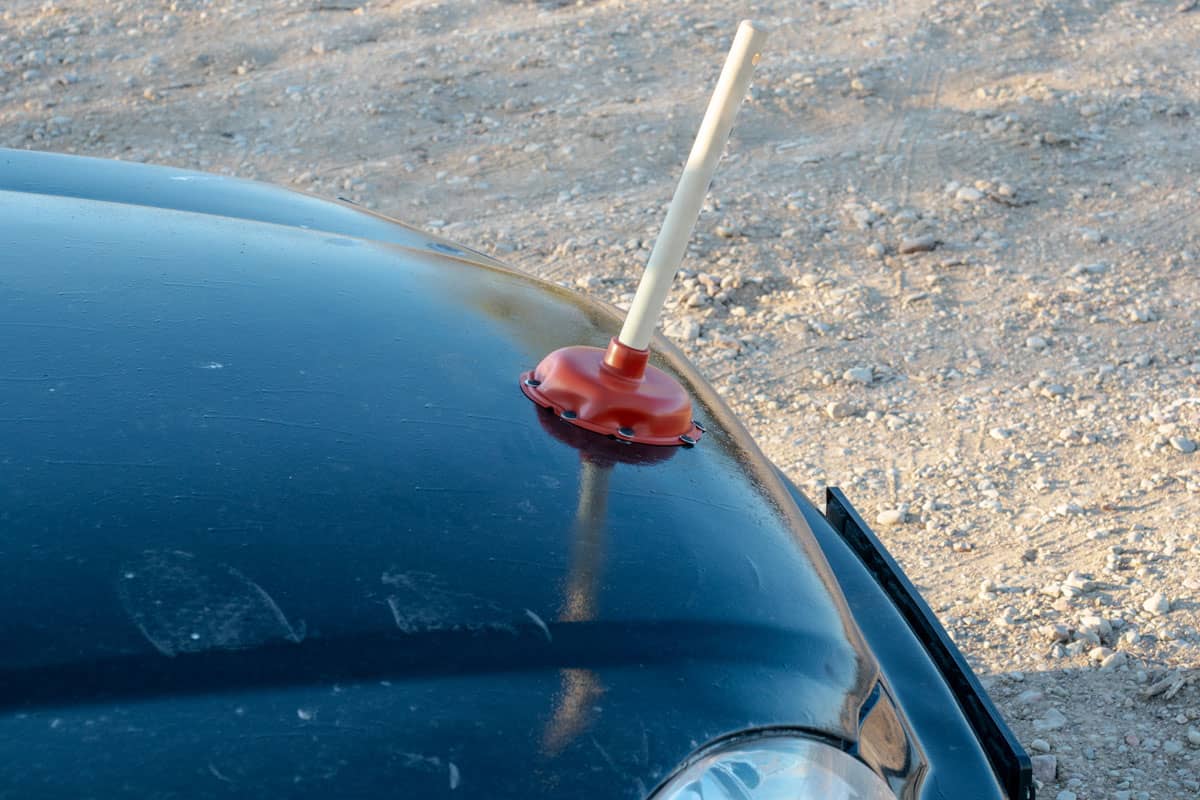 Like the hair dryer or dry ice method, using a plunger is not going to work miracles. However, it's worth a try before taking your car to a professional.

To use this method, simply place the plunger over the dent and push and pull the plunger up and down. The suction from the plunger might be enough to pop the dent out. However, you might find you are just left with the same dent. 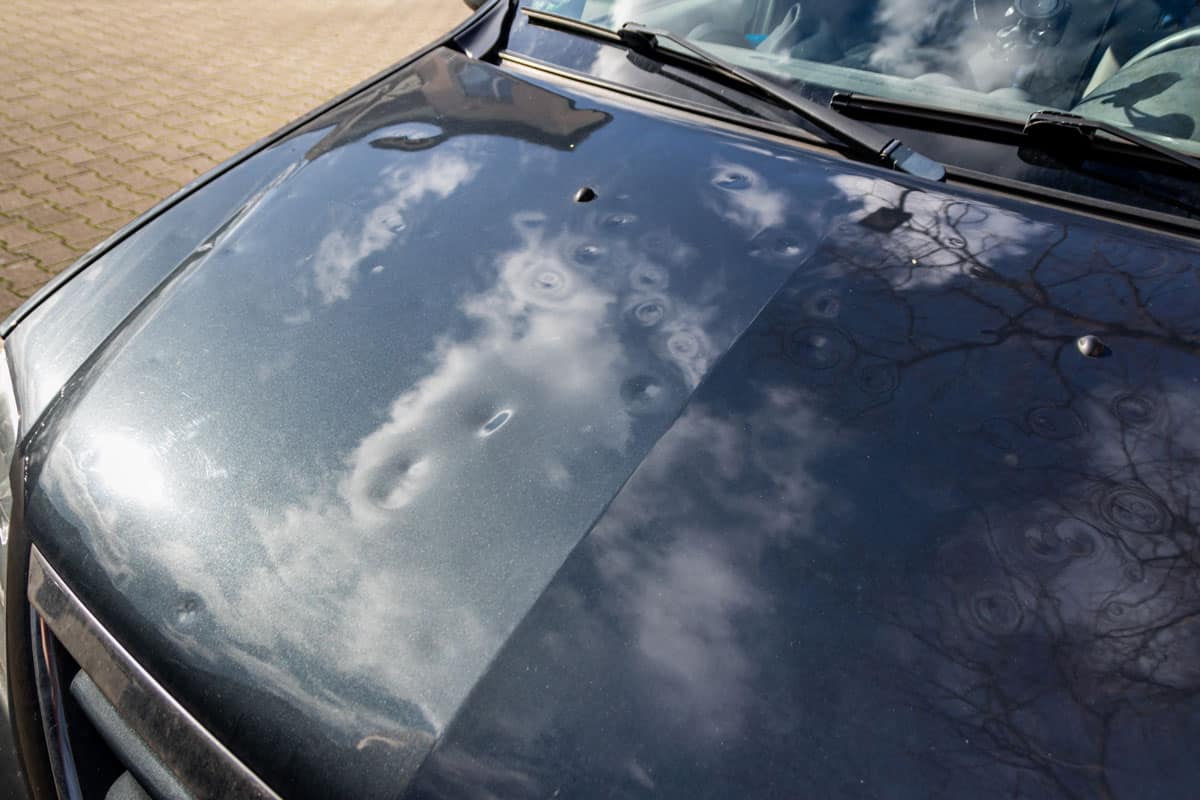 While there are at-home methods you can try to remove dents from your car, they are not always effective. You are better off going to a professional to have the dents properly repaired. This way, you can avoid further damage to your car.

Made it to the end? Here are other articles you might enjoy:

How Much Does It Cost To Fix A Dent In A Tesla?

How To Get A Dent Out Of A Truck – 6 DIY Methods for Truck Body and Bed!