Did you wake up to your Chevy Colorado not starting? This is one tough way to start your day. While most of the reasons why it isn't starting are not serious and do not leave a dent in your wallet, some could take you by surprise. To help you solve this problem, we researched this topic to give you a detailed look at why your Chevy Colorado is not starting.

But what could be wrong? Here is a sneak peek of possible problems: 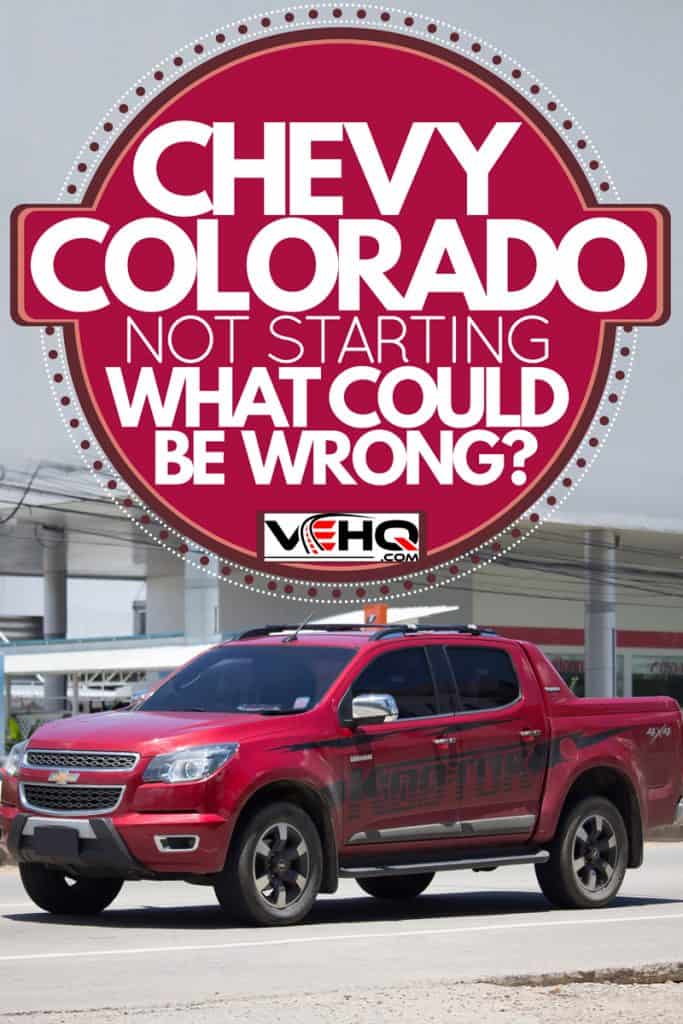 Chevy Colorado Not Starting - What Could Be Wrong?

There are a plethora of reasons that could cause your Chevy Colorado not to start. The most common one is a dead battery, an alternator problem, and a failed starter, in that order.

While most problems require replacing the common problematic parts such as the battery, alternator, or fuel systems, we recommend making a proper diagnosis before any repair. A proper diagnosis will enable you to understand the problems you are facing correctly.

Here are the top reasons a Chevy Colorado won't start, and a little about what you can do to fix these problems. If the repairs listed in this article are above your skill level, please consult with your mechanic and do not attempt to make the repair.

After a while, a car battery will start to lose its charge and not have enough power left to start the ignition. You will notice quickly if your battery has died in your Chevy Colorado.

There will be no sign of life when you turn the key in the ignition. No electrical components within the car will turn on, and the engine will not crank when started. If the battery loses charge while driving, the battery warning light sends a warning, and the engine might fail.

The first symptom of a bad fuel pump is a loud and strange noise when starting the car. If it fails completely, the fuel system's pressure is lost, resulting in reduced engine power, and your car will not start.

A failed vehicle ignition switch causes a loss of power to the vehicle's systems and components, such as the air-conditioner or the engine. If the ignition switch fails while the car is running, the engine will instantly lose power and stall.

While still at the onset, the ignition switch will start to crank the engine slower than usual until it eventually gives out and no longer starts.

A failure of the ignition switch lock cylinder results in a hard to run on ignition. When starting your car, the ignition needs a lot of shaking and wiggling to get the key turning correctly.

A faulty starter is a problem that affects many Chevy models, not just the Chevy Colorado. After the ignition key turns, the starter solenoid clicks, but the engine does not rotate to a start.

You might also hear a whirring or a fast spinning noise when you turn on the ignition, which further indicates that the starter key should be replaced.

We recommend that you consult a professional mechanic for these repairs and diagnostics rather than doing it yourself and causing further damage to your car.

Why Is The Chevy Colorado Sputtering?

It might be caused by incomplete combustion or a faulty ignition system. A blocked fuel injector will cause an engine sputter as well. While an engine sputter is often repaired as a problem on its own, it should be seen as the symptom of a larger problem within the engine that requires attention and will not self-correct itself into a sputter-free engine.

The most common engine problems are caused by problematic exhaust and fuel systems.

The gases will then travel to the catalytic converter, purifying it and removing elements such as carbon monoxide before exiting into the muffler. The muffler is responsible for reducing engine noise before the gas finally exits the vehicle via the tailpipe.

The fuel system stores and supplies fuel to the car. It is mixed with air, atomized, and vaporized in the engine intake system. It is then compressed in the engine cylinder and ignited to produce the energy used to move the pistons.

Reasons For A Sputtering Chevy Colorado

Now that you have understood how the exhaust and fuel systems work, here are some common reasons for an engine sputter:

The exhaust manifold collects exhaust gases. If it gets a leak, the engine will sputter and run unevenly, resulting in increased engine noise, poor performance, and destruction of the engine's plastic components.

If you fail to replace worn-out gaskets and seals, you will damage the exhaust manifold, resulting in a rough or sputtering engine.

When the catalytic converter fails to work correctly, the hydrocarbons leaving the exhaust are not appropriately burnt. The sulfur from the engine does not break down properly—resulting in a strong rotten egg-like smell. You are looking at the first sign of an impending engine failure.

A leaking vacuum system will result in a sputtering engine and eventual engine failure stalling your vehicle.

A sputtering engine signals a more severe problem in your vehicle’s working. We recommend getting a mechanic to check and diagnose your car’s exhaust system and check where the exact problem lies.

What Is The Chevy Pass Lock System?

The Pass Lock system is a car security system designed to prevent car theft by cutting fuel to the engine if someone tries to start it without the correct key. It is a highly efficient security system built into the lock and does not depend on a specialized key or a separate device for it to work.

When you insert the correct key into your Chevy Colorado, a signal transmits from the cylinder to the ECM.  This will cause your engine to activate and start like it normally should.

How To Disable The Pass Lock System

While the pass lock system is efficient, there is a common flaw. The system can lock you out of the car as well. If you have experienced this, or are currently locked in your car, immobile and unable to start it, here is how you can disable the Chevy Pass Lock System:

Most people tend to check their battery whenever the car engine stalls. If you check the battery and it is fine, you should check the ignition coils. While a car still runs when some ignition coils fail, it will not otherwise start quickly.

Luckily, you can test your coils with tools available from your local AutoZone.

We recommend that you check for faulty spark plugs as bad ones will overload the ignition coils or find a mechanic to check and diagnose your vehicle.

While older models are now showing intermittent starting problems from time to time, newer Chevy models have improved on this and have greater reliability. The Pass Lock system also guarantees excellent anti-theft security to your vehicle, giving it unmatched protection.

From this article, we are confident that you will diagnose the problems with your Chevy Colorado not starting. However, we recommend consulting with an experienced mechanic whenever a Chevy Colorado problem is not starting seems to be out of the scope of your skills.

If you want to learn more about Chevy Colorados and how long you can expect them to last, be sure to read How Many Miles Will A Chevy Colorado Last?

For more information about spark plugs, check out How Often To Change Spark Plugs In A Chevy Colorado.

Can A Ford Truck Be Used As A Generator?

Adaptive Cruise Control For Pickup Trucks What You Need To Know

5 Types of Dodge Trucks You Should Know [Ram Pickups]