Wondering what a dually truck is and whether or not you should be getting one to tow with?

Simply put, a dually is a pickup truck that has two pairs of wheels on its rear axle. So, instead of having two back wheels, it has four. A total of six wheels for the entire truck.

Or as the song by rapper Mr 2 Chainz says -

Why even have two pairs of rear wheels?

In a word: Traction.

Traction is the grip a tire has on the road. The more traction you have, the less likely is your vehicle to lose its grip on the road and skid.

Traction is a form of friction really. So, the more tire surface coming in touch with the road, the better is your traction.

Clearly, with two rear wheels on each side, you get double the friction and hence double the traction. Thus, a dually will usually get a much better grip on the road and will be far less likely to skid.

Why usually? Because traction relies on a good push from both sides - vehicle and road. With a fully loaded dually, you'll get much better friction because the weight of the content of the bed will push all four rear wheels into the ground. That's a good thing. According to some drivers, when the bed is empty, you lose that added traction. In fact, when you drive on gravel, you may get too little friction with an empty dually.

Another benefit of driving with a dually is that you literally have a spare tire going on each back wheel. If you have a flat or blow a tire, you're much better off - i.e. safer - with a dually.

Is that all good? We'll see in a minute as we look into the pros and cons of duallies.

Which pickup trucks are duallies?

Essentially, duallies are reserved for heavy-duty trucks. These are the workhorses of the pickup world, the ones that are actually meant to be carrying bricks and mortar and whatnot around. With four tires instead of two, contractors can haul heavier loads in the bed of their truck.

Can you convert any truck into a dually?

Hmmm...  it's not impossible to convert a smaller pickup into a dually. In some forum discussions, people were asking about that and apparently, a good mechanic can turn a single rear wheel truck into a dually. However, this can be a complicated process, as it may involve changes to the rear axle and in new models, re-programming of the vehicle's computer. So, this is the kind of "Do not try this at home" type of truck improvement that's best left to the pros.

Why would someone want to do that? Well, as far as we can see, to show off. For some people, duallies are a status symbol of sorts. The kind of people who get an F-450 to drive their kids to school and nothing more may as well spring for a totally unnecessary dually too.

Where can you buy a dually?

You can order your truck online these days and they'll sell it to you via a local dealership. When choosing the specs, you can also opt for a dually. This is what it looks like in Chevy's website when you mix & match the specs of your Silverado 3500 HD: 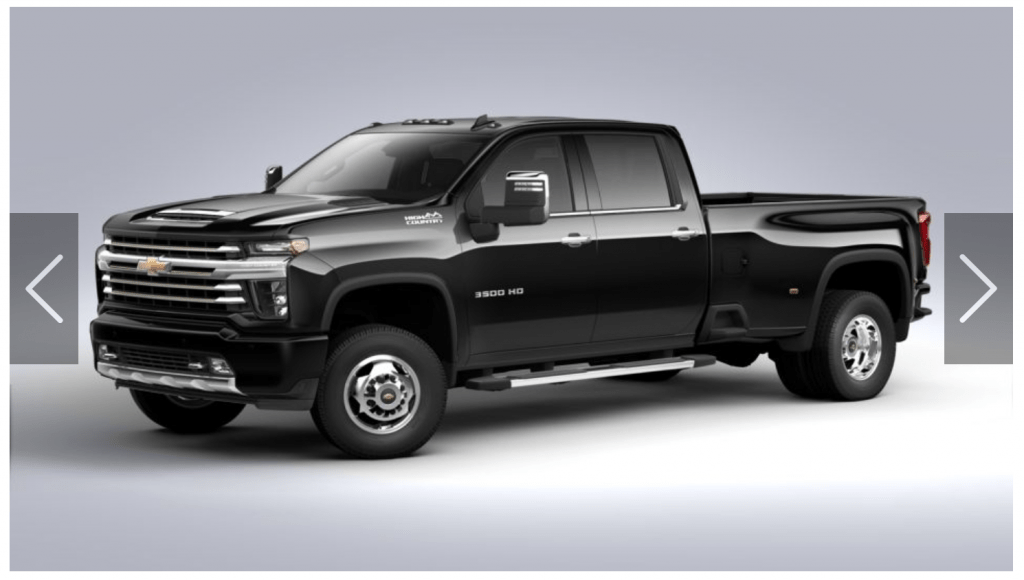 When buying a used pickup, you can search most sites specifically for duallies. Just keep in mind that doing so means you'll get far fewer results.

For example, we ran a search for Ram 3500 in CarGurus.com and it brought up 64 listings in that area. Ticking the "dual" box in the Rear Wheel option box reduces the results to 7. So, over 80% of used pickup trucks in that area are single rear wheels trucks and not duallies.

How much does a dually cost?

A dually is clearly more expensive than a truck with only one set of rear wheels. It's not just the cost of the two additional tires but also the specialized axle to accommodate them. The difference in price is not too bad though. In most models, opting for a dually will add a few hundreds of dollars to the bill - usually under a thousand.

Keep in mind that when it's time to change the tires, you'll have to pay for six tires rather than just four, which basically means you have slightly higher maintenance costs on a dually.

Pros and Cons of owning a dually

Before we look into the topic of towing a travel trailer or 5th wheel with a dually, let's quickly go over the full list of pros and cons for owning or driving a dually. If you have any to add - we'd love to see it in a comment.

Towing a travel trailer with a dually

The additional traction that comes from two sets of rear wheels helps the truck carry and tow slightly heavier loads than heavy-duty trucks with a single set of rear wheels.

So, the information we have here is from the experience of drivers. Where it comes to testimonials from owners of duallies, there's no question about it -

Do you need a dually truck to tow a travel trailer?

After all, Travel trailers are generally smaller and weigh less than 5th wheels.

You can tow a smaller trailer with an F-150 or another half-ton truck. A 3/4 truck like the F-250 will pull medium-sized bumper trailers without a problem.

When talking duallies, we're talking about very powerful 1-ton trucks. These will probably tow just about any trailer without a problem.

Take for example one of Jayco's largest travel trailers, the 40ft long Jay Flight. As far as travel trailers go, it's a very long and large one. Even after adding the weight of hitch, full tanks and cargo, you're unlikely to go past 12,000 lbs. According to Ford's manual, just about any F-350 can tow 12,000 lbs and most can tow even more than that.

What about towing a 5th wheel?

5th wheels are a different story altogether. For two reasons -

For these two reasons, a dually can be a great option when towing a 5th wheel.

Not only does that require a very powerful super heavy-duty truck, this is also where a dually can really make a difference. And owners of such rigs agree - a dually is better for towing a 5th wheel, pretty much of any size. Largely because of the perfect match between a stronger rear end and gooseneck towing.

A dually means a heavy-duty (1 ton) truck with a double set of rear wheels.

If you're thinking of towing a 5th wheel, a dually is a great choice due to its structure and added strength. This outweighs (pardon the pun!) the fact that the truck is more cumbersome and a bit harder to drive and park, especially in urban settings.

If you're thinking of towing a travel trailer, aka bumper trailer or camper, you really don't think a dually. Chances are you don't even need a heavy-duty truck and can settle for a 3/4 pickup or possibly even tow your trailer with a half-ton truck.

We would love to hear from people who own trucks and RVs about how they feel on these topics, so please do leave us a comment!

I noted you do you not comment on rear wheel drive trucks that provide torque to only one wheel on slippery surfaces. Is there not posi-track available on two-wheel drive trucks to prevent this? This is a nightmare at times for me in my truck when going uphill, or even level surfaces when applying gas from a complete stop. My rear kicks to the right in some cases and will also come to a complete stop or go backwards.

Our dually is definitely a plus for driving cross country with our 5th wheel that is 16500 lbs. GVW before loading it. On windy days I am much happier with our dually although fuel economy does suffer.

Thanks for the comment, Richard. You're right — the fuel economy of duallies isn't something you can brag about, but the added safety when towing bigger trailers is absolutely worth it.