When fully electric cars are mentioned, some people may assume that they will also have a self-driving feature because of Tesla's influence in the market. That's why with Ford releasing their all-electric pickup truck, the Ford Lightning, you might think it also has a self-driving feature. We have researched this question, and here is what we found out.

Yes, the Ford Lightning has a self-driving feature called Ford's BlueCruise Semi-autonomous Driving Mode. This makes the new all-EV pickup truck fit in with the trend of auto-pilot features available on other EV brands sold in the market today. This marks newly chartered territory for the pickup truck segment as it joins the industry's shift from fuel-powered to electric-powered vehicles.

We know you have many additional questions regarding Ford Lightning's new self-driving feature, like whether it is safe to use, how reliable it is, and whether they are even legal. Don't worry, as we'll cover all the bases with you! Continue reading to find out all the answers. You will also find other informational and interesting articles at the end of this post.

Self-driving In A Ford Lightning 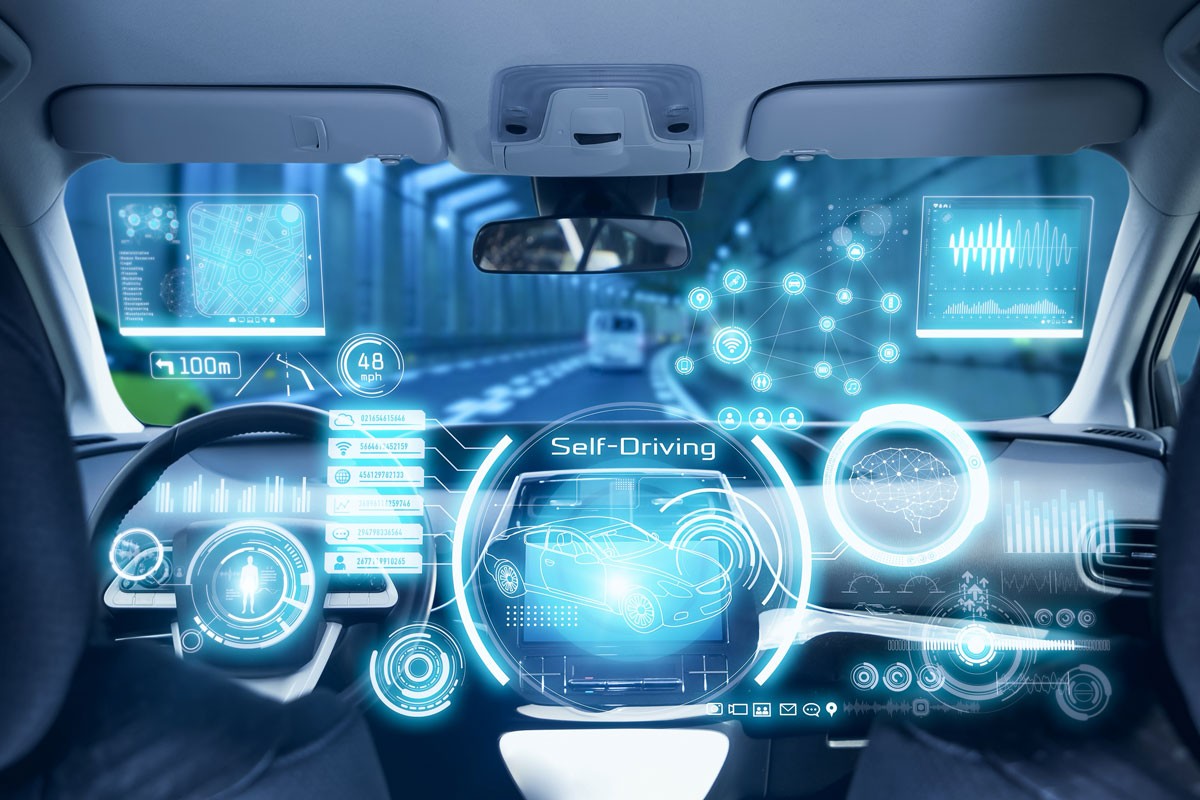 The self-driving feature can be likened to cruise control, because both features allow the vehicle to maintain driving patterns without driver intervention but don't grant full independence from the driver.

Along with the trend of vehicles gradually shifting to electric vehicles comes a shift to slightly more autonomous vehicles. Ford calls their version of this feature the all-new BlueCruise Semi-autonomous Driving Mode, which was launched in the 2022 Ford Lightning.

But this does not mean that the vehicle is fully autonomous. The driver will still have to operate the vehicle, but the main difference is that the driver will not have to steer the car, brake for the car, or even step on the gas. With the help of adaptive cruise control, the vehicle's computer will be the one to control the truck's speed.

The only job the driver will do is to have an eye on the road. This is monitored by a camera on the instrument panel of the vehicle that ensures you are still paying attention on the road.

This does not give you the liberty to sleep behind the wheel or not sit in the driver's seat while traveling alone. You will still be the one to dictate where to go, as the truck will only change lanes after activating the turn signal. After that, it will change lanes on its own once it has detected that it is safe to do so.

Are self-driving features on vehicles safe? 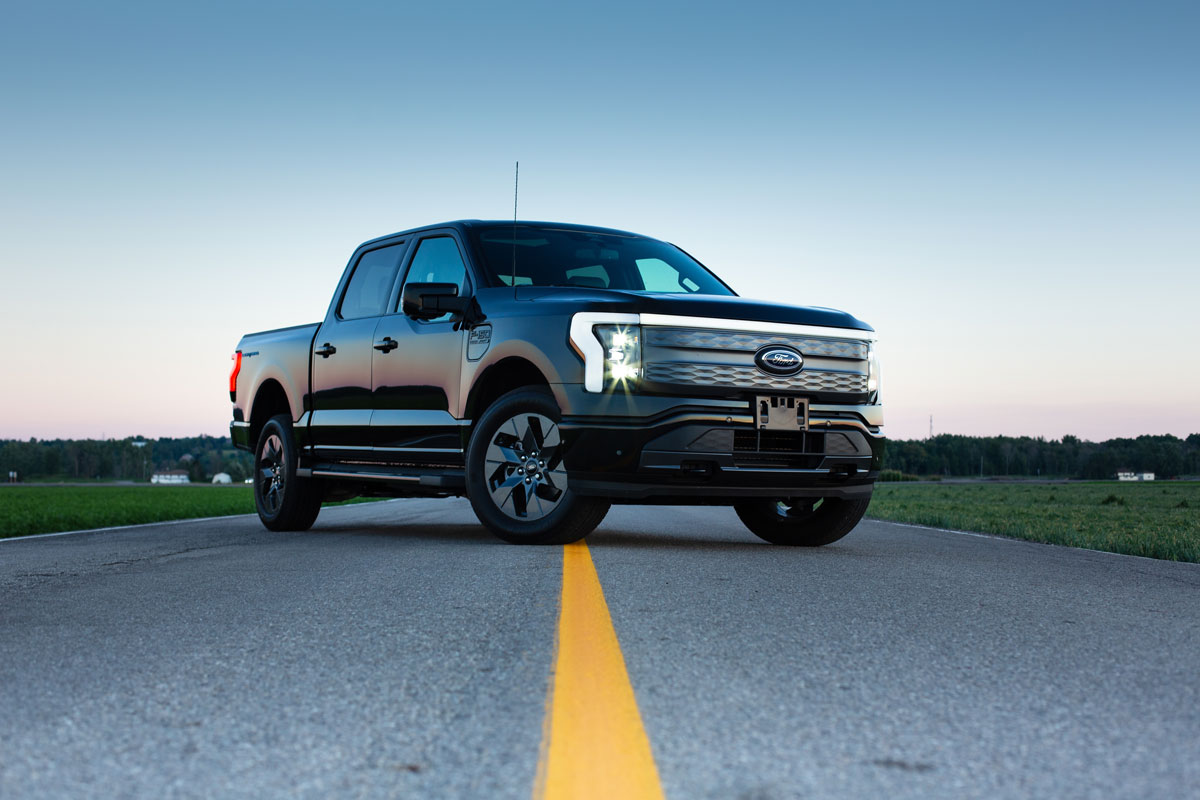 Specifically with the design of Ford's BlueCruise Semi-autonomous Driving Mode on their Lightning trucks, the driver is still well involved in operating the vehicle.

The feature will deactivate if it detects that you aren't focusing on the road for a certain amount of time. It also does not make sudden evasive actions autonomously, even if there are sudden obstructions on the road, such as potholes or other objects blocking your lane, so you'll need to remain attentive while driving.

However, you will still have a far more relaxing time driving, especially on long, straightforward drives on the freeway, as the hands-free and adaptive cruise control features allow you to rest your arms and legs if they are beginning to get tired from hours of sitting and driving.

Is it legal to use the self-driving feature of the Ford Lightning?

Yes, it is legal to use the self-driving feature of the Ford Lightning and other semi-autonomous driving features from different brands. Currently, there are no federal or state laws that explicitly prohibit the use of such technology.

This type of innovation is how the future will look, and in a few year's time, we will start to see this kind of feature on most cars. Some states have some regulations on self-driving vehicles, as experiments of sleeping while the car is on autopilot have been a growing concern in recent years.

Below is the list of states that have explicitly allowed self-driving vehicles on their roads.

The thing with self-driving vehicles is that they are not purely self-driving. This means that you can still operate them without using the self-driving feature, as it is only a luxury feature and is not the permanent nature of the car.

You can still use the Ford Lightning as a regular car while operating it. The BlueCruise Semi-autonomous Driving Mode is merely an option you can utilize when you want and can be disabled if you don't want to use it.

Can the Ford Lightning charge itself? 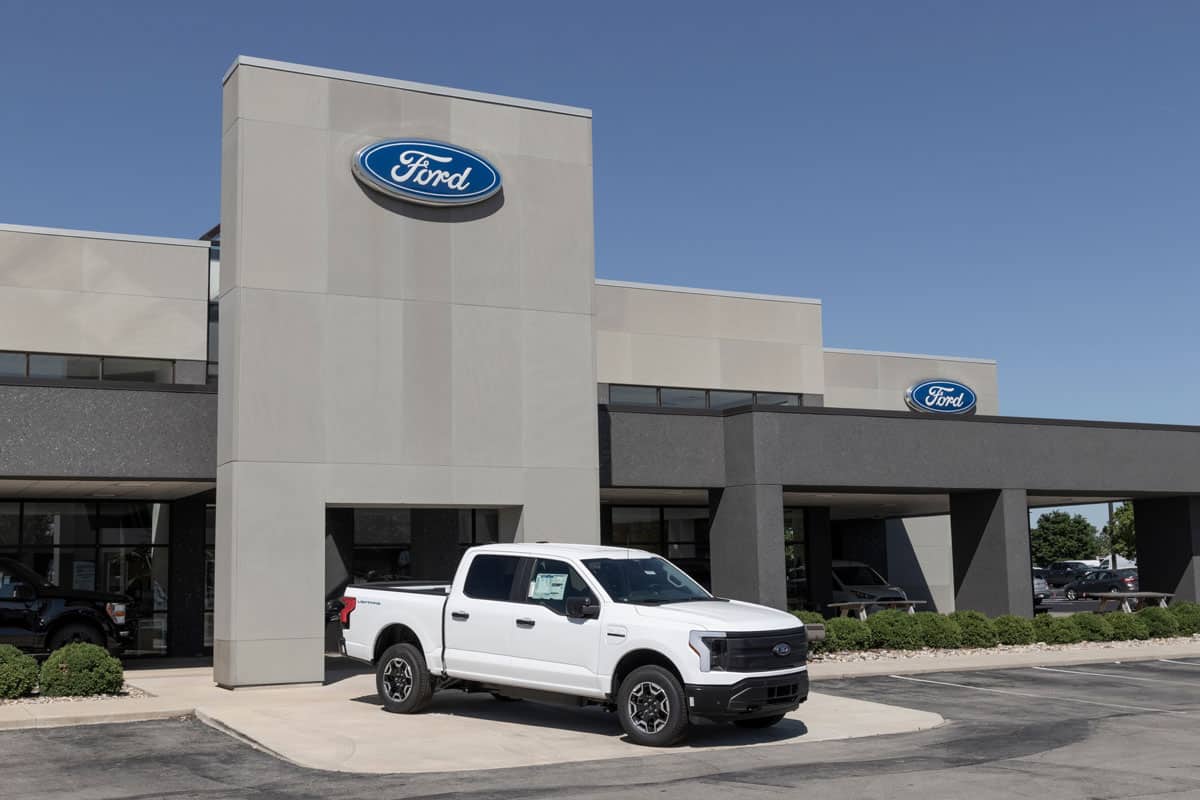 Surprisingly enough, the Ford Lightning can charge itself. The lighting has a unique feature that allows it to charge other vehicles by having a 240-volt outlet on its bed. Charging the Lightning itself by plugging its charger in its own truck bed volt is possible.

But doing so can damage the battery and will translate to even more loss of power as the vehicle's battery will have to keep converting DC to AC back to AC. We recommend not doing this as this will only waste your time and could potentially cause irreversible damage to your Lightning.

Can F-150 Lightning use Tesla supercharger?

Yes, the Ford Lightning uses a J1772 plug, the North American industry standard, making it possible for it to be charged using a Tesla charger. What is not possible is to charge a Tesla on a Ford EV charger as they make their one J1772 plugs.

Here is a video of a Ford Lightning charging from a Tesla Charger.

How long will the Ford Lightning battery last? 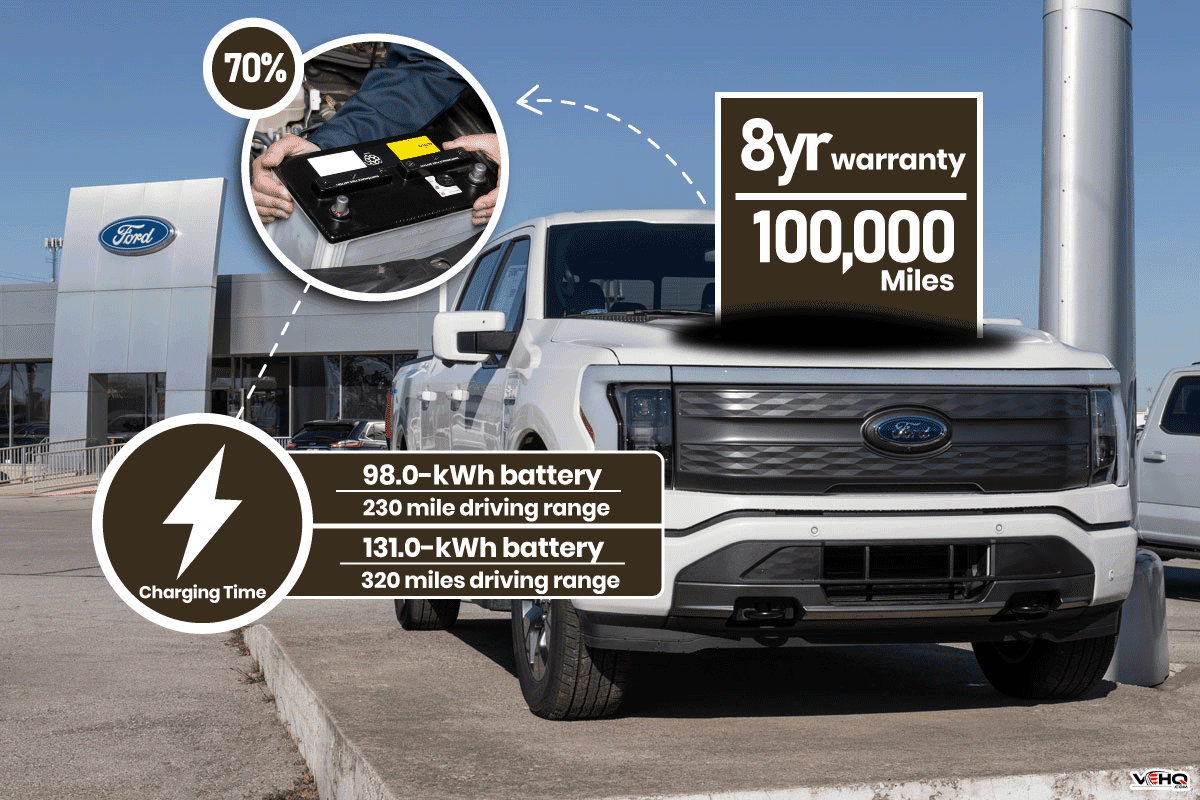 Since Ford EVs are fairly new, getting a number for how long will their batteries last still isn't 100% accurate. But according to their manual, they offer an eight year warranty or a 100,000 miles warranty on their batteries, stating that it the batteries should still have at least 70% of its original life at this time.

With that said, there will be a lot of factors that will be considered and real world usage will be taken into account. Instances like completely running out of battery will have negative effects on the overall battery lifespan, especially if this happens multiple times. Amount of usage is also another considering factor.

Overworking the battery by going over the suggested payload and and towing capacity will be cause additional stress to the battery as it also acts as the the EV's engine.

When it comes to charge time, Ford claims a 230 mile driving range for their smaller 98.0-kWh battery, while a more impressive 320 miles for their bigger 131.0-kWh battery pack.

Again, this will be subjected to real world usage as payload, speed, and even terrain will dictate how much power consumption your battery will eat.

All Ford Lightning trucks are 4x4 drive as they are powered by a dual-electric motor rated to have a whooping 775 pound feet of torque.

Here is a quick recap of what we've learned 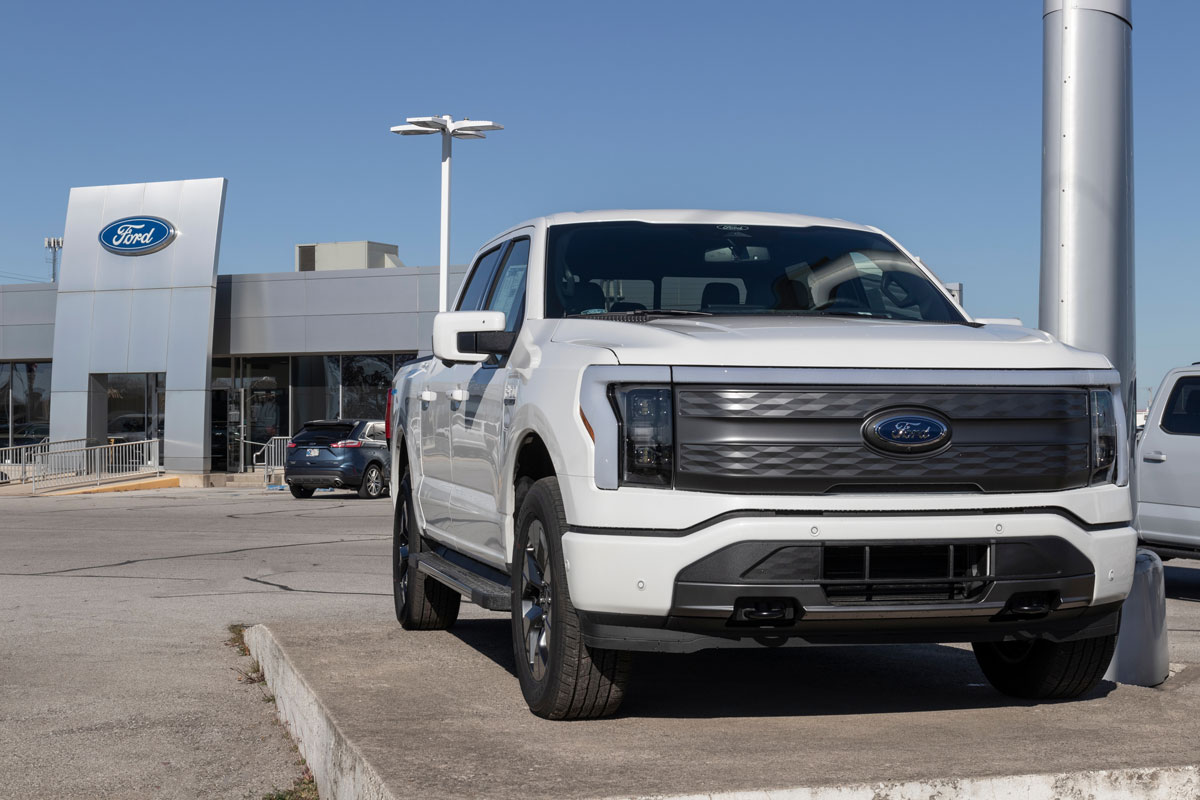 This allows you hands free operation of the vehicle but at the same time, it has a feature that monitors its drover to make sure that its eyes are still on the road all the time, or else it will self deactivate for safety purposes.

We hope we have answered your question about the self-driving feature of your Ford Lightning. Do you have any more Ford-related queries that you want to be answered? You're in luck! Just check out some of our previously written articles below to learn more!

How To Remove The Supercharger On A Ford Lightning?

Can You Charge A Ford Lightning With A Generator?

Ford F150 Wrench Light Displayed But No Acceleration – What To Do?