Many know the Ford Lightning as a fast and modern electric-powered full-size truck. However, the Lightning nameplate made its debut in a gasoline-powered Ford F-150 platform three decades ago. Did Ford supercharge the early Lightning models to achieve the speed and power that the name connotes? Here's what our research has uncovered.

Although Ford used a naturally-aspirated engine for the first-generation SVT Lightning, the automaker used a supercharged mill for the nameplate's second generation.  Because of the Eaton supercharger, the SVT Lightning achieved up to 380 h.p. and 450 lb.-ft. of torque.

Would you like to know more about the street performance-tuned Ford SVT Lightning? Read on, because we've also included some interesting trivia about the Lightning nameplate's evolution and legacy.

Did The Ford Lightning Come Supercharged?

When the name Ford Lightning comes up, many people will automatically think of the electric vehicle (EV) variant currently in the market along with the Ford F-150 line. However, Ford actually used the "Lightning" nameplate for one of its trucks almost 30 years ago, and it was not because the vehicle was electric-powered. 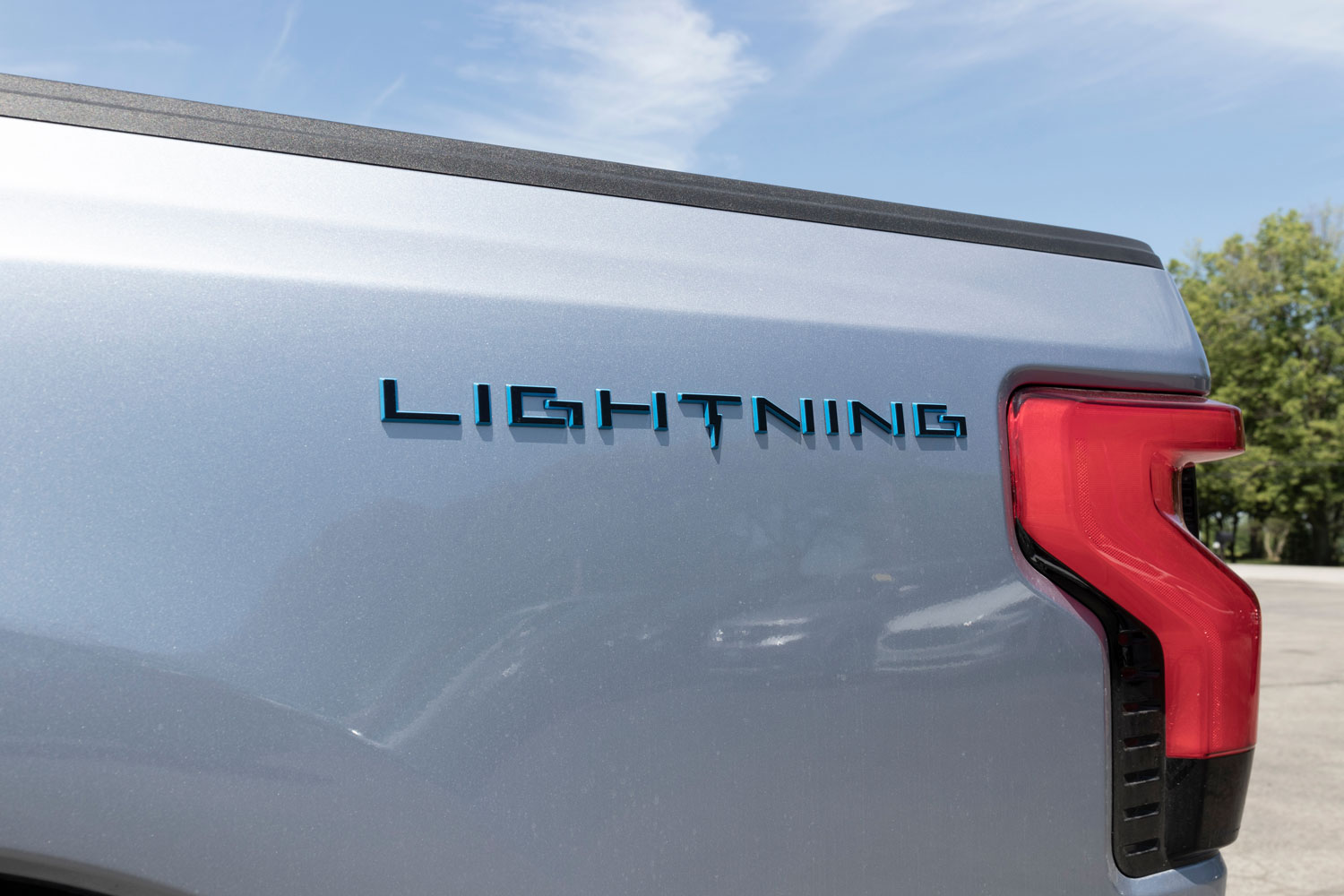 Undoubtedly, the first-generation Ford Lightning trucks (1993 to 1995) already delivered impressive performance numbers with a naturally-aspirated 5.8-liter engine. However, the second-generation Lightning (1999-2004) delivered even more horsepower and torque with its Eaton supercharger.

Here are the specs of the first and second-generation Ford SVT Lightning trucks.

Introduced in 1992 and officially released as a 1993 model, the first-generation SVT Lightning was a limited-edition and street performance-tuned variation of the Ford F-150. Many muscle truck enthusiasts regard this early Lightning as the pioneer of modern performance trucks.

As a sports truck, the Ford SVT lightning was flashier, lighter, sat lower, and was more powerful than the regular F-150 of that time. Although the 7.4-liter, 230 h.p., 385 lb.-ft. Chevrolet Silverado 454 SS came earlier in the sport truck scene, the SVT lightning was a formidable answer from the Blue Oval group.

The 1993 SVT Lightning had a naturally-aspirated 5.8-liter V8 under the hood.  Although this mill was smaller compared to that of the Chevrolet 454 SS's powerplant, the former had a higher horsepower output at 240 h.p. Torque-wise, the Lightning still had a competitive 340 lb.-ft.

With a 4-speed automatic transmission and a 4.10 final gear ratio, the rear-wheel-drive Lightning was very quick off the line. It only took the sports truck 7.2 seconds to reach 60 mph from a standstill, and 15.6 seconds to finish a quarter mile.

In 1999, SVT released the second-generation SVT Lightning based on the new F-150 platform that came out in 1997.

For the second-generation performance truck, Ford wanted to make the Lightning competitive not just against other sports trucks, but even against muscle cars.  At this point in time, they fitted the most powerful Ford engine that they could fit in the Lightning's hood: an F-150 exclusive 5.4-liter supercharged V8.

With a power output of 360 h.p. and a torque rating of 440 lb.-ft., the second-generation SVT Lightning did not disappoint. From the first generation's 7.2-second 60 mph sprint, the second generation improved to an amazing 5.2 seconds.

In 2001, the SVT Lightning further improved its power to 380 h.p. and 450 lb.-ft. due to improved intercooler and other engine modifications.

Design-wise, the second-generation Lightning was also one inch lower in the front compared to standard F-150 models.  The rear suspension, however, was tuned a bit higher than its predecessor at 2 inches lower than the regular full-size model.

In 2004, Ford decided to discontinue the performance truck from its product line.  Over the span of six years, the automaker produced over 28,000 units of the second-generation Lightning.

Today, many enthusiasts consider the 2003 to 2004 SVT Lightnings as the best model years of the second-generation performance truck.

From 2000 to 2004, Ford and Harley-Davidson decided to join hands and build a co-branded F-150 variant. Coincidentally, in 2003, both brands celebrated their 100th-year anniversaries with a supercharged Harley-Davidson F-150 that had roughly the same specs as the SVT Lightning - but this time, with four doors.

What Does A Supercharger Do?

A supercharger is a type of air compressor that increases the pressure and density of the air that goes into an internal combustion engine. The higher air pressure allows the engine to burn more fuel, more efficiently - thus creating more power compared to a naturally-aspirated engine.

Which Is Better A Turbo Or A SuperCharger? 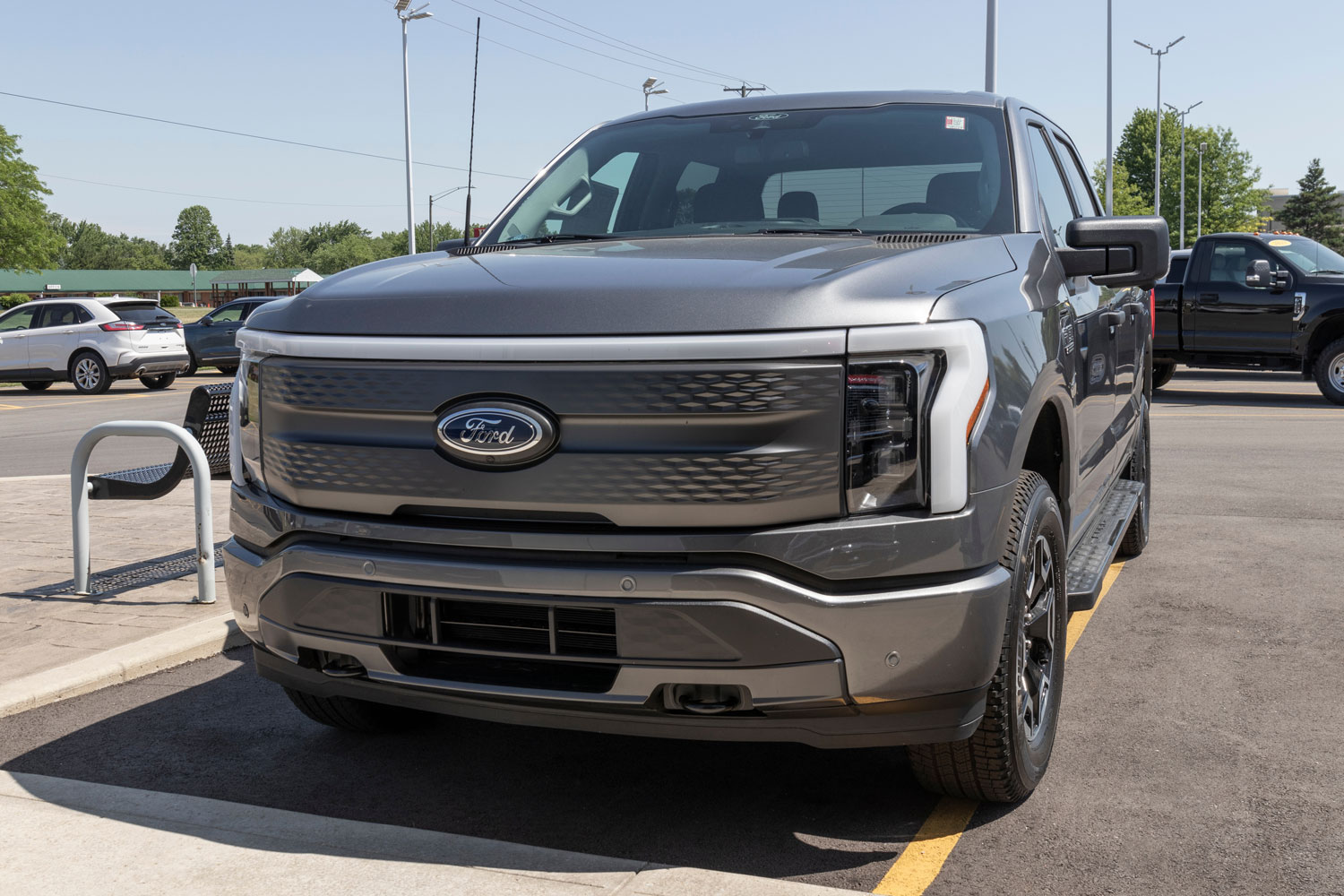 Although turbochargers and superchargers are both forced induction technologies, each type of air pressure boosting has its pros and cons.

What Does Turbocharging Do To A Car?

Unlike the supercharger, a turbocharger does not rely on an engine-driven belt or chain to function. Instead, a turbocharger uses the engine's hot exhaust gases to spin its turbine, which in turn powers its air compressor.

As the engine speed goes higher, more exhaust gases make the turbocharger's turbine spin faster.  In this way, a turbocharger can provide 25% to 40% more power to the engine.  However, this power boost does not happen instantaneously.  Turbines need exhaust gas pressure to build up speed and achieve optimum turbocharger boost.

Hence, when you floor the accelerator, you will need to wait for your engine to rev up and produce the required exhaust gas before your turbocharger can actually boost your engine power further.  This phenomenon is called turbo lag and is one of turbocharging's drawbacks.

Another drawback is the additional heat that builds up in the turbocharger due to the accumulation of hot exhaust gases.  To mitigate the extreme temperature build-up, the turbocharger needs to use engine oil for lubrication and cooling.

On the other hand, turbocharging makes an engine more efficient than naturally-aspirated or even supercharged ones. Because turbochargers run on waste gases, they increase an engine's output using recovered energy.

Moreover, since turbochargers do not add load to the engine, this type of forced induction is compatible with small-displacement mills. Nowadays, even cars with 1.0-liter engines can get a significant power boost from turbochargers.

Finally, modern turbochargers also use wastegates that reduce harmful emissions to the atmosphere.

Is Supercharged Better Than Turbocharged?

Because a supercharger's operation speed depends directly on the engine crankshaft's rotation speed, there is no lag in power boosting.  This means that a supercharger can provide additional power across a broader range of engine RPM.

Finally, superchargers lose out to turbochargers in terms of overall efficiency because a supercharger does not recover any energy from combustion exhaust gases.

Of course, at the end of the day, both the supercharger and the turbocharger have their respective advantages and disadvantages depending on the driver's preference and the vehicle to be boosted. Some people like the smoother power of superchargers better, while others like the jolt that turbochargers can give even to small engines.

What Does SVT Mean On Ford? 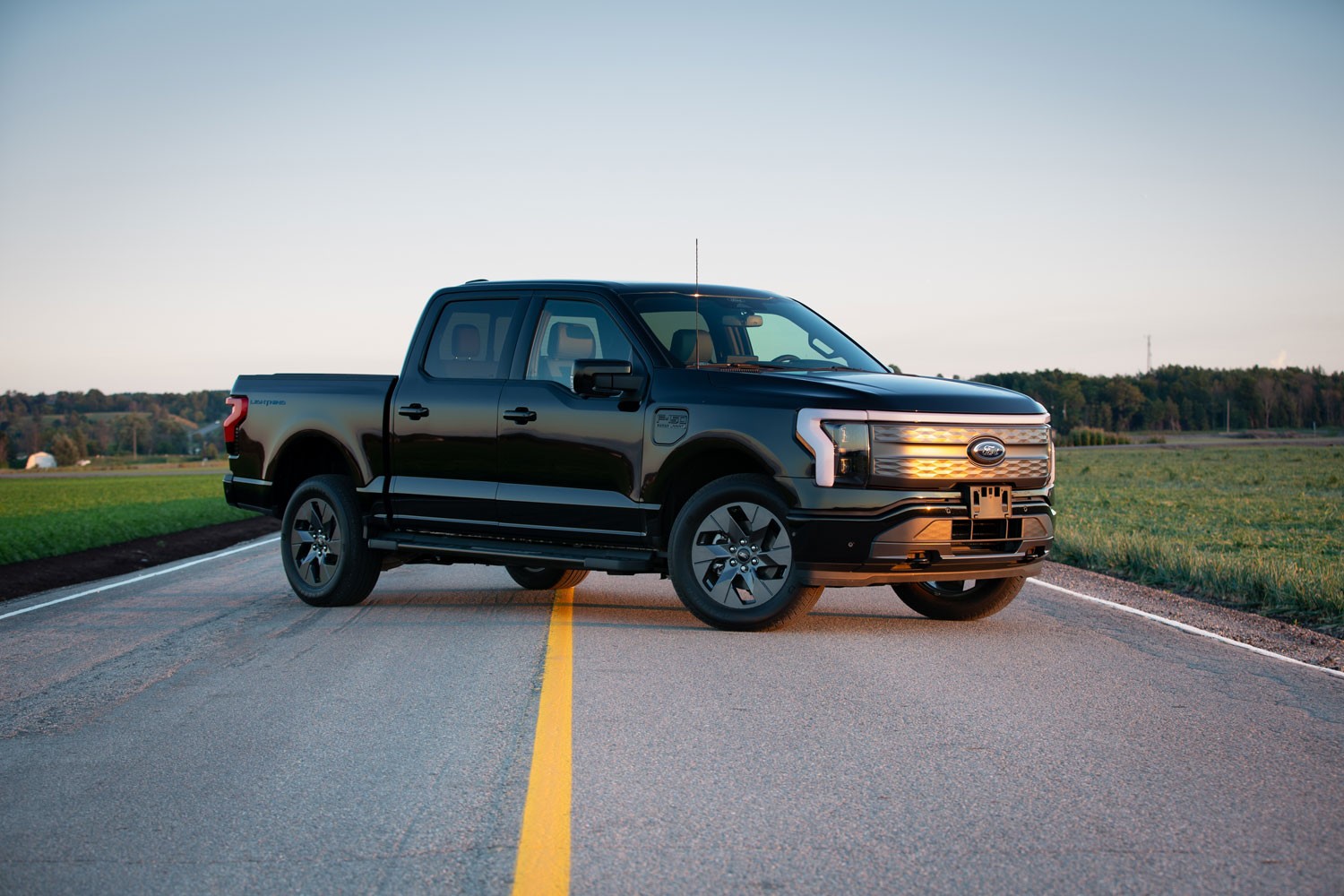 In 1991, Ford gathered a group of its talented engineers and product planners under one division to become its Special Vehicle Team, or SVT. Ford established the SVT to design and produce performance vehicles in relatively low volumes to cater to passionate, racing-inclined niche markets.

Since 1993, Ford's SVT has released over a quarter million units of these limited-edition performance vehicles.  Among these nameplates are: 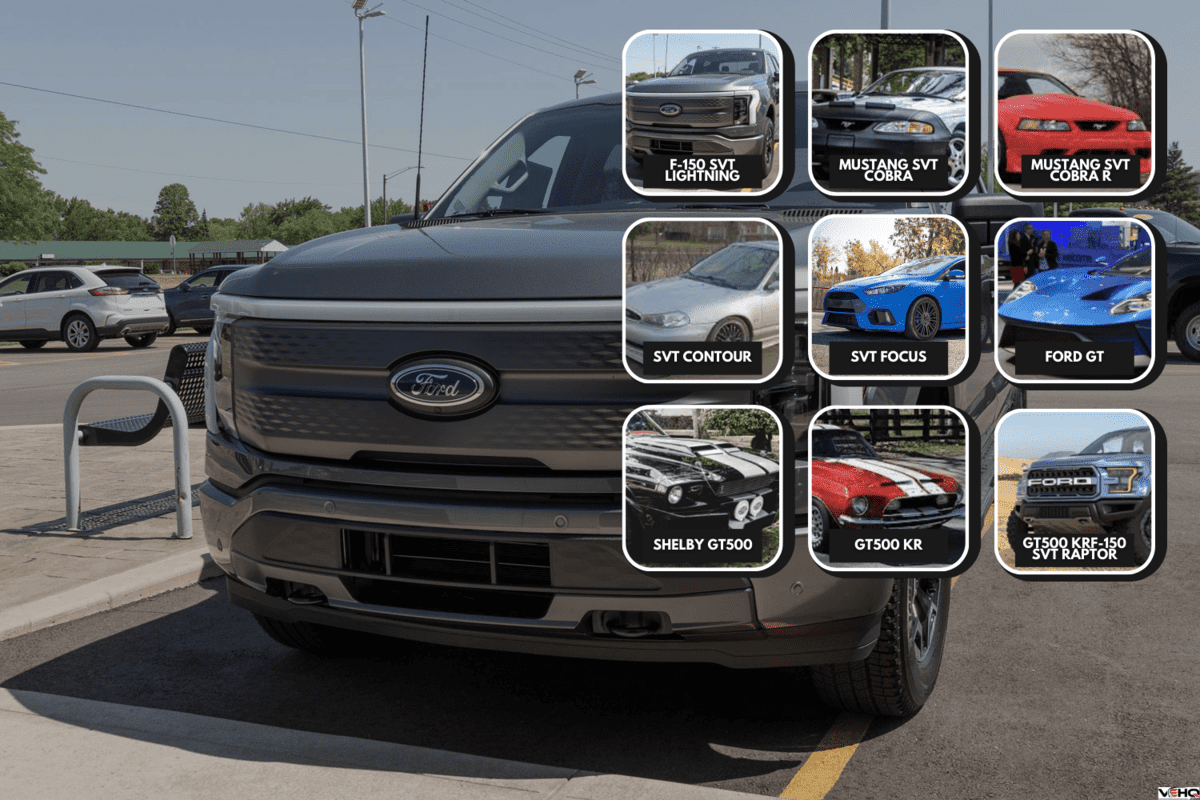 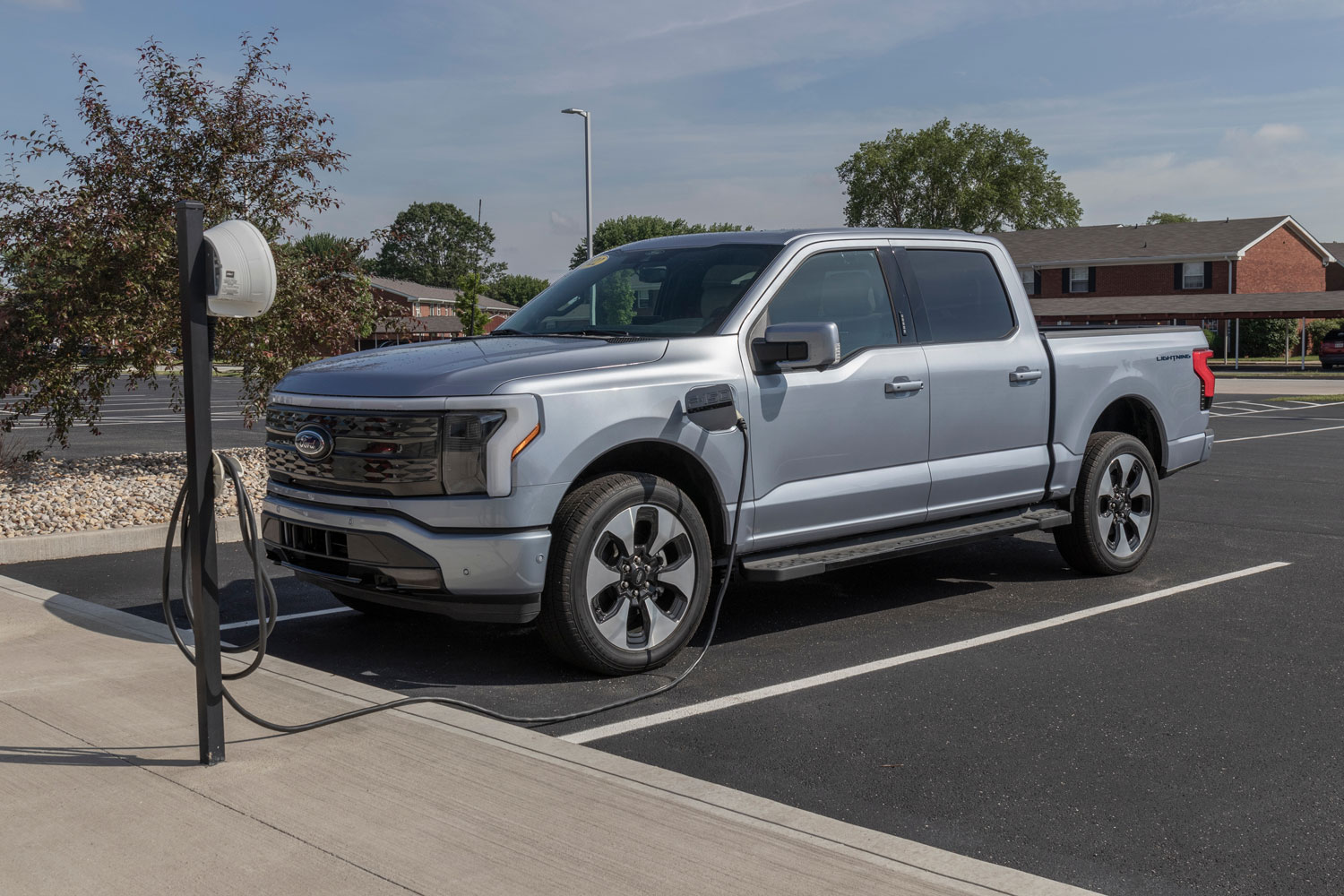 Today, Ford SVT Lightning trucks are some of the most sought-after vehicles in the sports truck category. Although there were tens of thousands of SVT Lightnings sold, they are still rare considering that Ford's F-series has sold over 26 million units over seven decades.

As proof of their market value, SVT Lightning trucks still command an impressive premium price in the used-car market. Today, a first-generation 1993 SVT Lightning can cost over $53,000. Second-generation SVT Lightning units, on the other hand, are sold at prices ranging from $25,000 to $30,000.

The second-generation Ford SVT Lightning came with a supercharged 5.4-liter Triton V8 engine. During the last iteration of the gasoline-powered Lightning in 2003 and 2004, the truck boasted 380 h.p. and 450 lb.-ft. of torque.

Thank you for reading. We hope you found a better appreciation for the supercharged Ford SVT Lightning.

For more interesting reads about Ford trucks, you may check out these great articles below.

How Long To Charge A Ford Lightning

What Are The Biggest Tires That Fit A Stock Trail Boss?