Have you ever been riding down the highway and accidentally bumped your key with your arm or knee? If so, the question of what would happen if you turned the key while driving probably crossed your mind. Can you actually turn the key off while driving? We've combed through the research and came up with some surprising answers for you!

Although it's not recommended, it is possible to turn your key in the ignition of a moving vehicle. In most modern vehicles, whether manual or automatic transmission, a few things may happen. The power steering will cease, and your engine will shut down. Once the motor is off, brakes will only have a couple of good presses left in them.

So, is it bad to turn the key when the car is already on? What happens if you hold the ignition for too long? What causes ignition switch failure? Continue reading to learn everything you didn't know you needed to know about ignition issues! 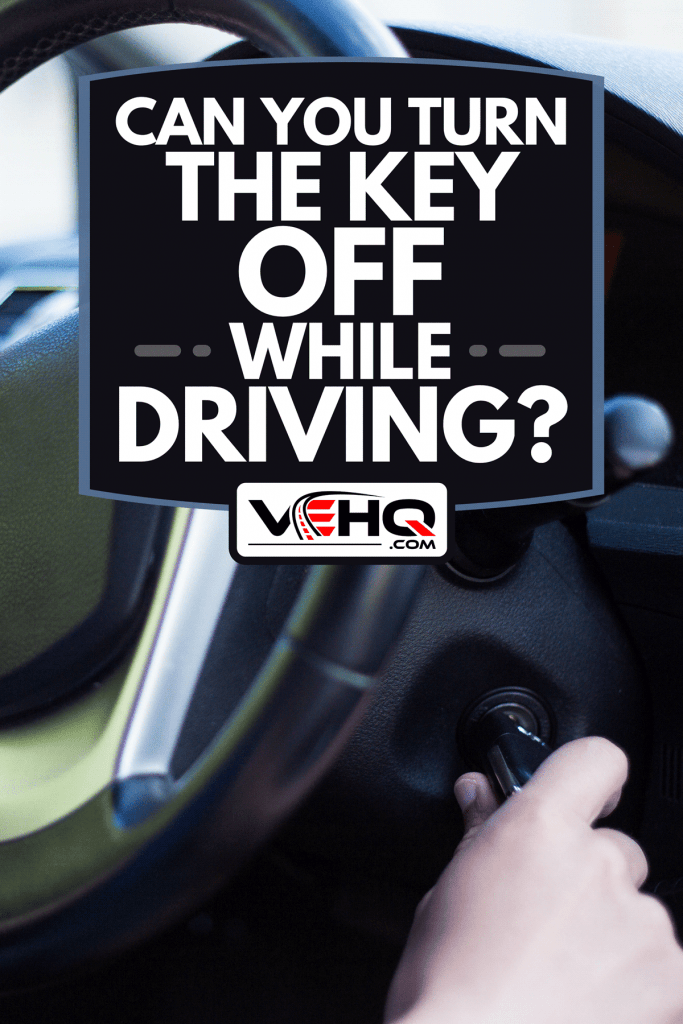 What happens if you turn the key off while driving? 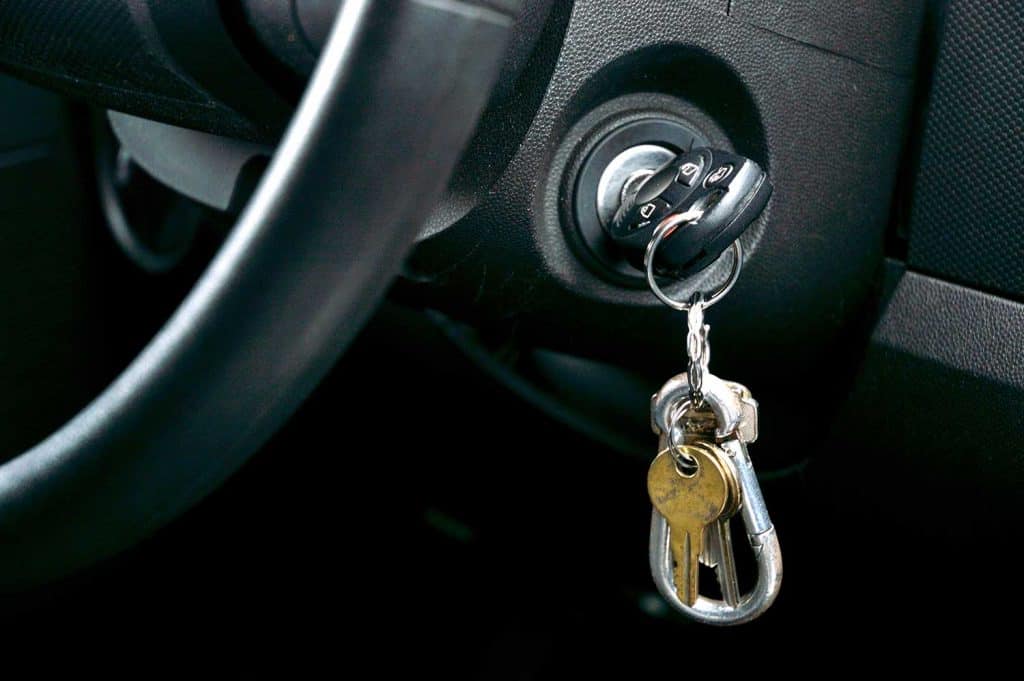 The results of turning off a key in a moving vehicle are similar in both types of transmissions. However, there are also a few differences. Let's take a closer look at each situation!

Automatic transmissions have a simplified gearbox, which makes them generally easier to drive than a manual. The car does the shifting for you. There's no clutch to worry about, and the transition between gears is much smoother. Plus, stalling is not much of an issue.

If you have this type of transmission, here's what you could expect to happen if you turn the ignition off while driving:

The engine will shut down as it's no longer receiving power. This will cause the vehicle to slowly decelerate until it eventually stops. All electrical functions such as radio, Bluetooth, and GPS are unavailable.

You will also lose your power steering. This does not mean it's locked. Instead, the steering column will default to the manual, which is much harder to maneuver and turn. Finally, your brakes will only contain 1-2 presses once the motor goes down. The emergency brake is still available, though. 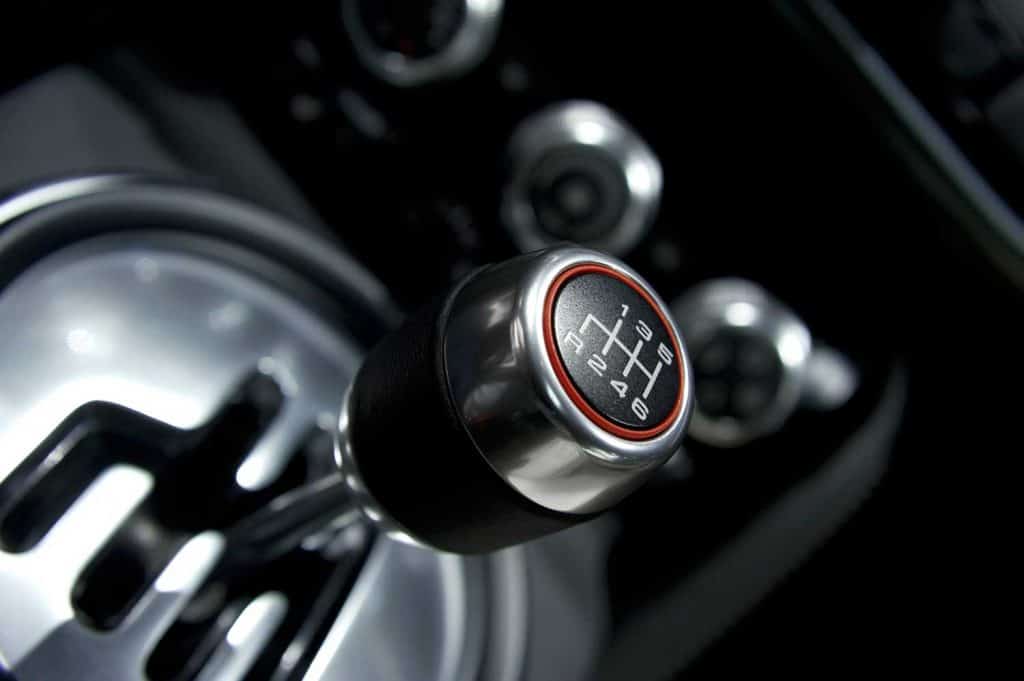 A manual transmission, also known as a stick shift, requires the driver to do all the shifting. There are typically six gears. A clutch pedal allows you to control power exchange between the engine and transmission to safely change between them. Manual models put the operator in much greater control of the vehicle than an automatic.

Turning the key off in a moving manual vehicle will issue some similar results to the automatic models. For instance, electrical components will lose power. The engine, power steering, and brakes are still affected.

There is a difference, though, regarding the clutch. If the engine is shut down with the clutch engaged, you'll eventually slow to a rate under the minimum speed for the gear. A grinding noise may commence, and then the vehicle will come to a stop. Alternatively, if the clutch is disengaged, you can simply coast in neutral until a natural loss of momentum brings you to a halt.

Although keyless ignitions are not a transmission type, we still need to mention this circumstance. More and more recent models are designed with keyless entry and ignitions. These react differently than the cases we just discussed. This is because the majority of modern vehicles with keyless ignitions have built-in safety features.

If you accidentally press the on/off button while moving, nothing will happen in most cases. Some very early models would shut down, but most newer variations have corrected the danger. Manufacturers now construct these models so that the starter will only engage if the engine is not running. To do anything with the motor, the button must be held for at least three seconds.

Is it bad to turn the key when the car is already on? 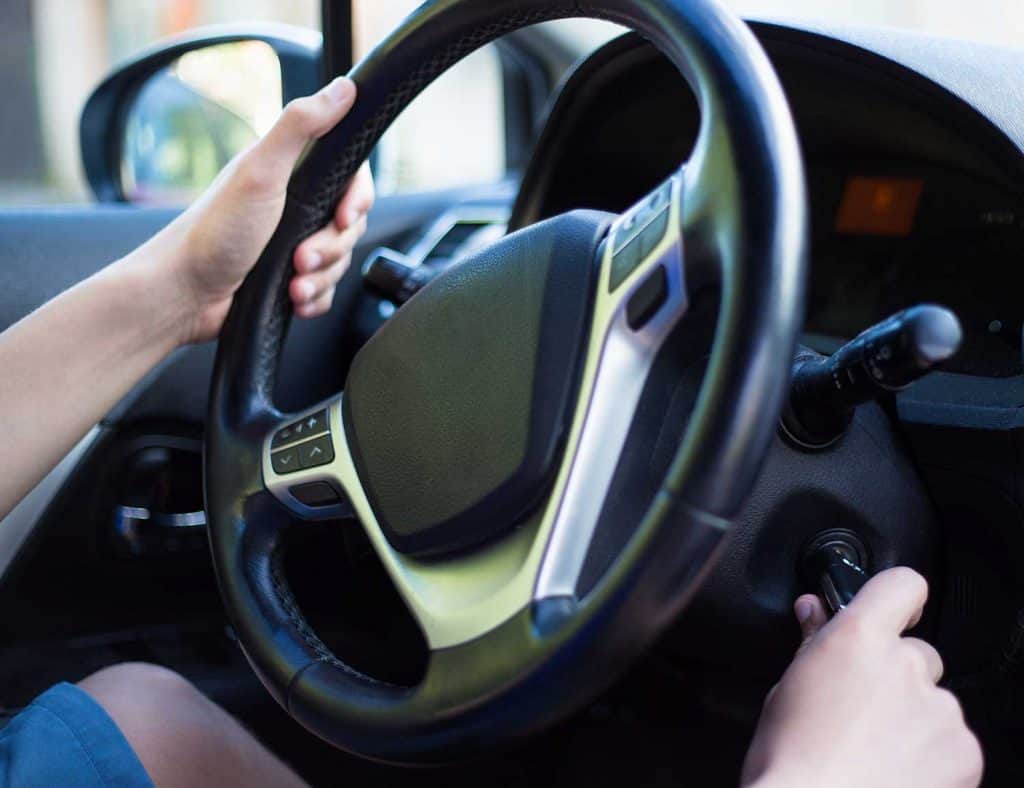 Engaging the key when a vehicle is idling is a common error many of us make. Most of the time, it's because our thoughts are elsewhere or the engine is simply too quiet to hear. It's an honest mistake but one that can do damage if repeated often enough.

If you've ever done this, you probably remember the terrible shriek of grinding metal that comes as a result. This is due to the starter trying to interact with an already moving flywheel. You're hearing metal on metal.

Metal is tough and can absorb some abuse. However, doing this repetitively can cause deterioration in either the starter or the flywheel. Both are expensive repairs, and it's often required to remove the engine to replace a flywheel. Mechanics quote anywhere from $400 to $1,300 for such a repair. Ouch!

How long should you hold the key in the ignition? 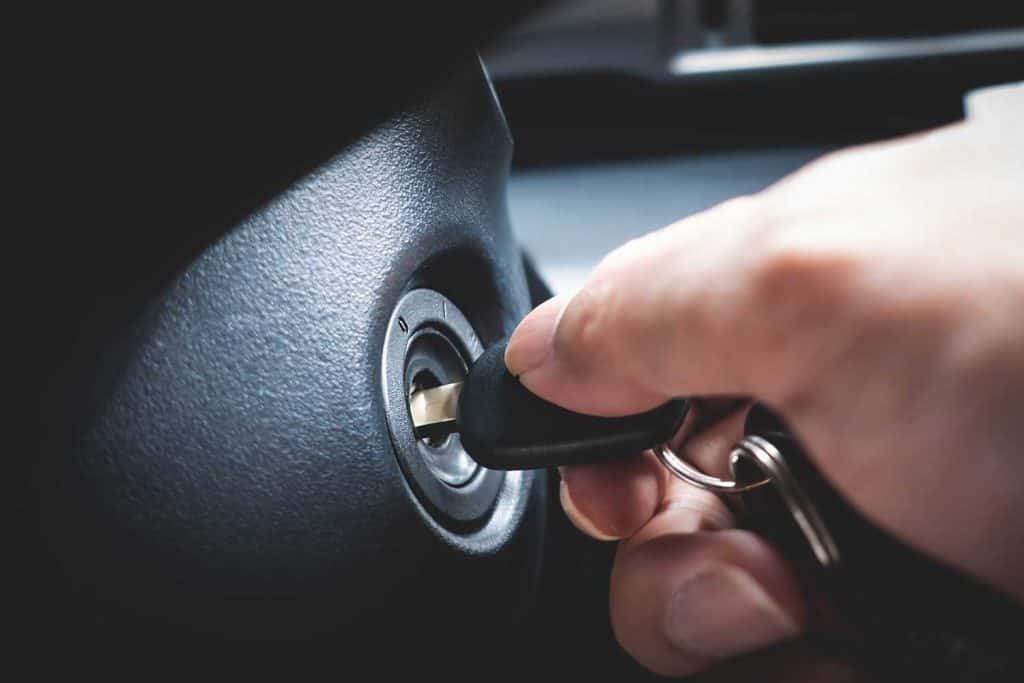 The key should only be held in the ignition until the vehicle cranks up. Most will start in three seconds, usually less. Anything approaching ten seconds or more can cause damage to your car's internals.

What happens if you hold the ignition for too long? 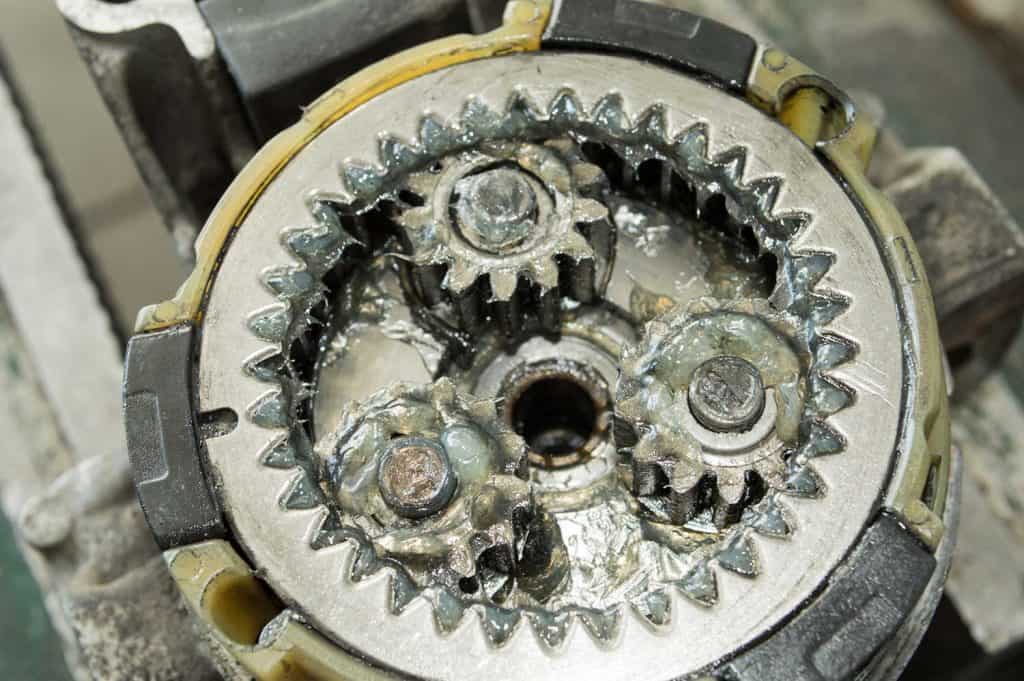 Holding the ignition after the vehicle begins running often results in damage. The gear that engages with the flywheel continues to run, and that's not alright. It can affect your starter, break teeth on your flywheel, and even overheat the engine. As we previously mentioned, these can be extremely costly repairs. So, let go of that key once the engine cranks! 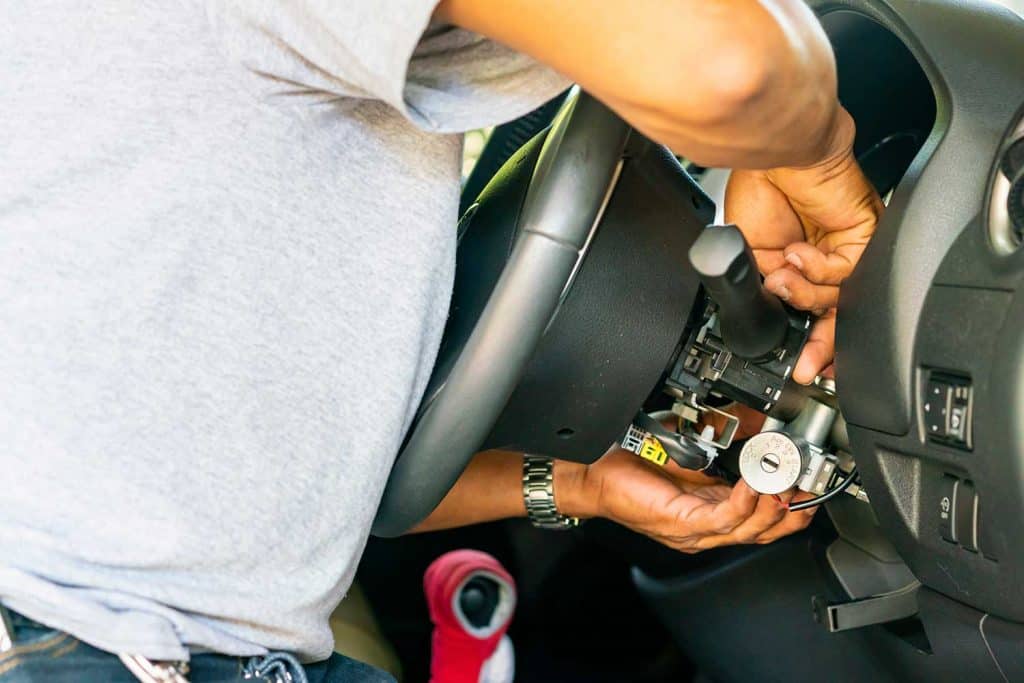 The ignition switch is one of the more complex parts of your car. It controls or powers much of the features in the vehicle and is composed of multiple components. If it fails to start, there can be several causes. We'll list out a few, but your mechanic can tell you more.

How do you know an ignition switch is bad? 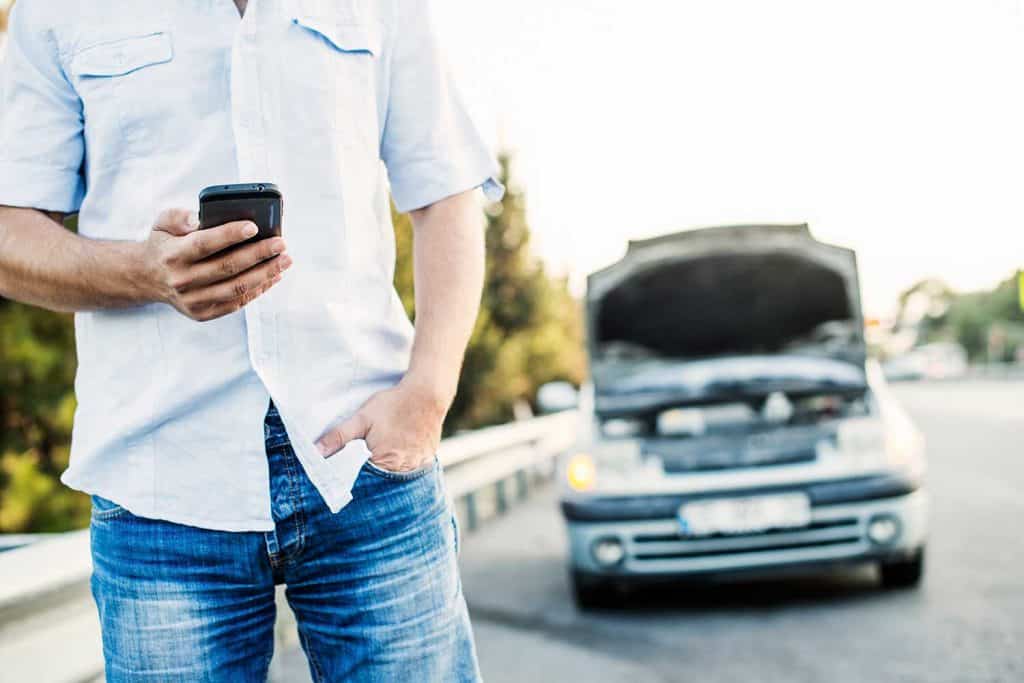 There are five common signs that your ignition most likely needs to be replaced. If you are dealing with any of the following symptoms, it might be time to call a mechanic. Due to the complexity of the device, this is a job for professionals.

How do you start a car with a bad ignition switch? 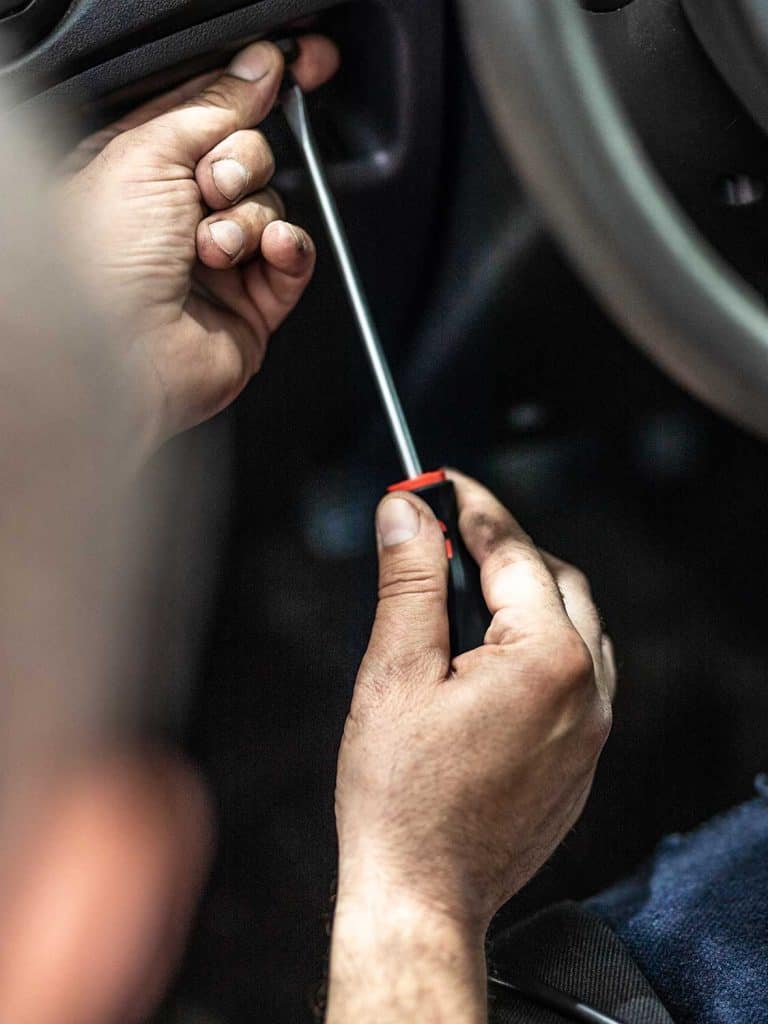 A bad ignition switch can be challenging to diagnose, as we've just established. That being the case, your capability and method of starting a car with a bad switch vary by situation. Let's point out a few techniques that might work for you!

For a more visual walkthrough, check out this video!

Break out the drill and screwdriver

Use this method at your own risk because there is the potential to further damage the ignition. However, it can and does work for people. First, find the keyhole in the ignition. Using a metal drill, drill into the hole at the same length as your key. This will break the ignition cylinder's pins and allow you to use a screwdriver as a key.

For those of you, that know vehicles and electrical. Modern vehicles have made this more difficult by limiting easy access to wires, but older autos are susceptible. Somewhere around the mid-90s is the most likely cutoff.

You can get in via the steering column, and we've found this great tutorial to point you in the right direction. Just remember to keep your owner's manual handy for the color codes of the vehicle's wiring!

Hopefully, we've satisfied your curiosity about whether you can turn the key off while driving. Although it's possible, there's really no reason to do this. It could lead to damage to the vehicle, property, and even your own person if you crash.

Keep in mind that you should release the key once the motor starts, so you don't break your starter or flywheel teeth. Take care of your vehicle, and it will be better able to take care of you!

Car Key Only Goes Halfway In Lock – What To Do?

Ignition Key Hot When Removed – Should I Do Anything About It?