Antifreeze protects the functional parts of a car from freezing due to a temperature change. There are different kinds of antifreeze for different vehicles like cars and RVs, but can you use them interchangeably? To help answer your question, we asked automobile experts, and here's what they said.

RV antifreeze should not be used in a car. You shouldn't use antifreeze meant for cars in RVs either. There are different types of antifreeze made with varying components, so you should select the appropriate formula for your vehicle. Check with your owner's manual or local dealership if you are unsure of the antifreeze type.

If you would like to understand more about antifreeze and learn which is safe for cars and RVs, then keep reading. 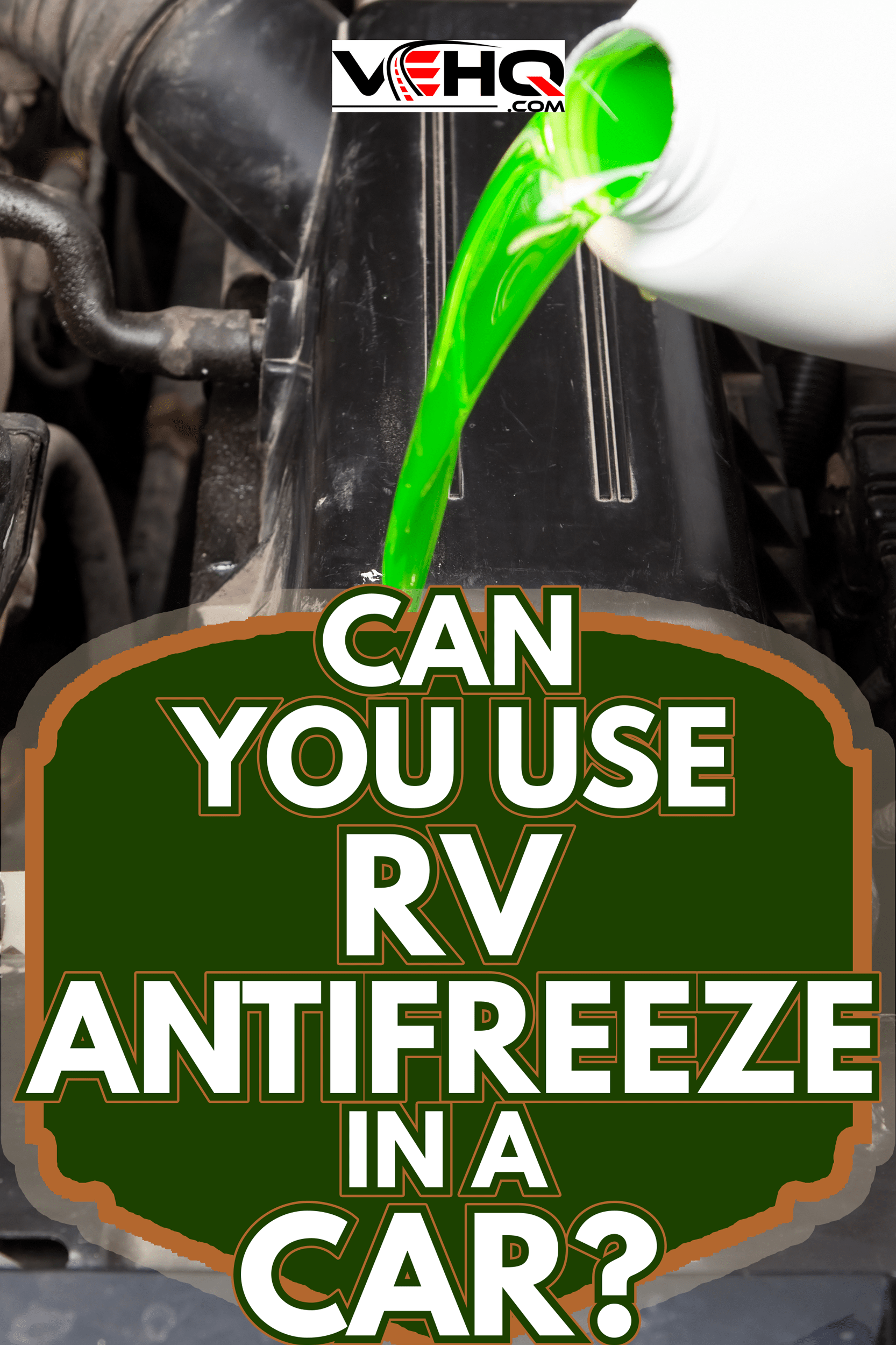 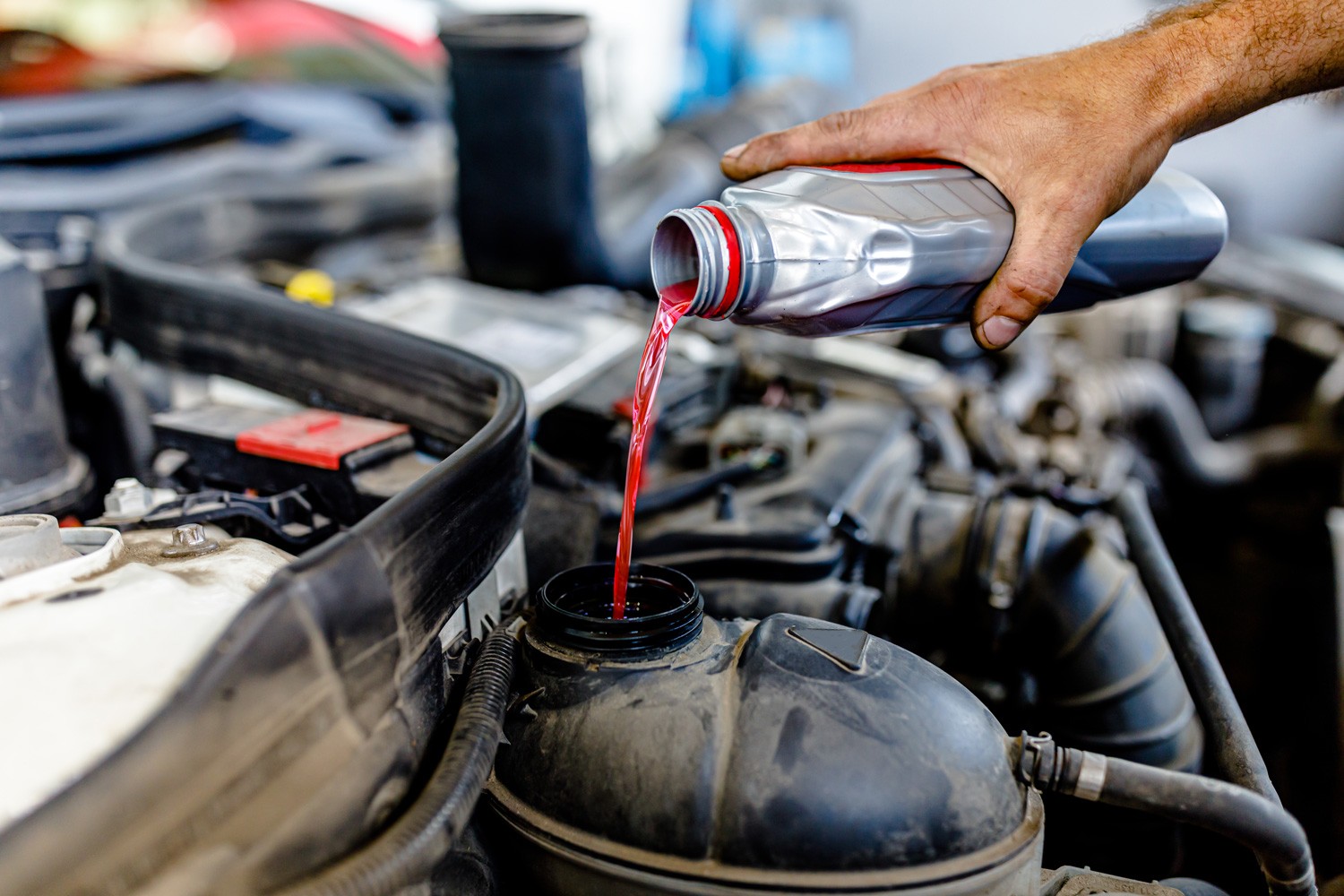 Antifreeze is a substance that helps manage the temperature of a car engine or any other coolant. During hot weather, it helps to keep the engine at an average warm temperature. The engine would also be unaffected by cool temperatures if there is antifreeze present.

It is often added to automotive coolant and other types of heat transfer fluids. Antifreeze provides protection against freezing for a range of temperatures and is available in different types.

Antifreeze is important for various reasons. Not only because it regulates temperature, but it does help protect the engine against corrosion, overheating, and worse, engine knock.

Antifreeze is made of ethylene glycol or propylene glycol as its primary reagent. They are mixed with water at a 1:1 equal ratio to reduce the temperature tension.

Nevertheless, your car should not be low in antifreeze to save you from unusual massive spending on the car's engine. Hence it is advisable you refilled it regularly.

What is RV Antifreeze?

RV antifreeze is antifreeze that is used for RVs. It can also be used in the plumbing system. Most plumbers use RV antifreeze to protect the pipes, joints, hoses, and other plumbing facilities against extreme weather.

They are non-toxic as they are used in most water systems. They also serve as seals to the water system, fitting, and pipes around your RV. During winter, RV antifreeze dissolves the potential ice that could have been formed on lines by reducing the freezing point of the water.

Unfortunately, they can't be used in cars. They can be fatal to a car engine, as there are differences between a car antifreeze and an RV antifreeze. In summary, here are the uses of RV antifreeze: 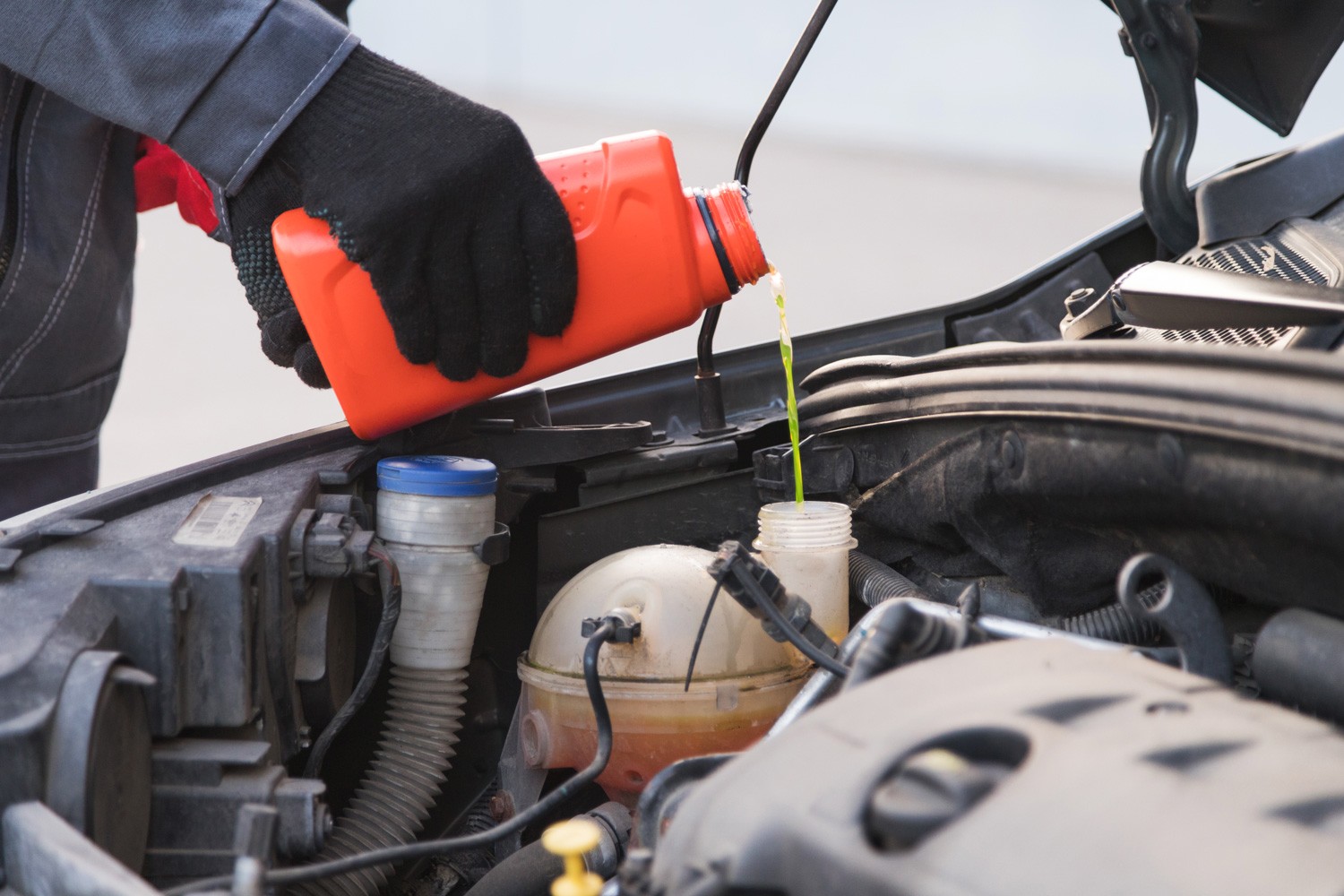 RV antifreeze and car antifreeze have their primary purposes, although they can also have other uses, such as being used as lubricants. One thing you should note about RV antifreeze is that these types are pink. Though car antifreeze too might differ in color, they are almost never pink.

So, once you see any kind of antifreeze that is pink in color, just know it might likely be an RV antifreeze. Alternatively, Car antifreeze and RV antifreeze are both substances that lower freezing points. However, the formal is toxic while the latter is less toxic.

Also, RV antifreeze does not contain enough proportion of anti-corrosive substances. So, they are probably not the best for metallic parts such as engines.

Can You Use RV Antifreeze in a Car?

In a car antifreeze, some chemicals dissolve the crystals while also lubricating the engine. The RV antifreeze lacks these chemicals because they are toxic to human health.

The crystals are dangerous to your car engines. They could eat up the engine metals from the inside. RV antifreeze does not have corrosion inhibitors. Hence, causing a lot of damage. If you want to protect your car against this potential damage, use the correct car antifreeze.

Again, the fastest way to differentiate them is by checking the color. RV antifreeze is typically pink, while car antifreeze is usually green or light green.

What are The Four Types of Antifreeze? 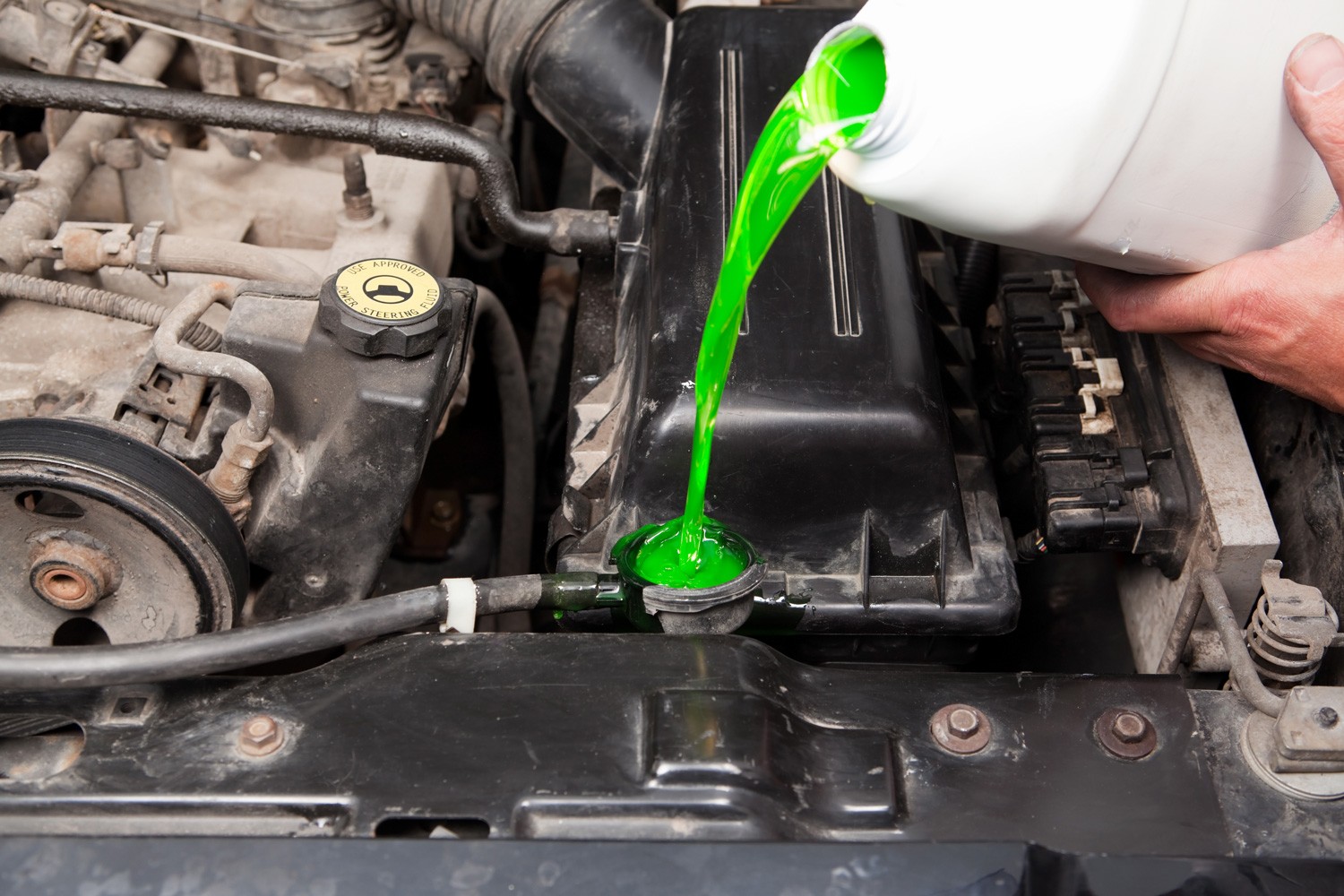 There are four basic types of antifreeze you should know about. Here they are:

Antifreeze usually has dark green, orange, or red color and has a lifespan of about five years. It does not contain phosphate or silicate, but other substances are entirely in.

These types of antifreeze usually have a light green color and a lifespan of about two years. They contain phosphate or silicate. This is why they form crystals after two years of usage or when they have lost form.

The green-colored coolant is a chemical that helps prevent the engine from overheating and freezing. It has to be changed more frequently, every two years or 24,000 miles.

This is because the inorganic additive technology has been used in the coolant for many years now. The green-colored coolant is made up of a mix of water and ethylene glycol, which helps stop your engine from freezing over. This type of antifreeze can be found in cars and trucks that are manufactured after the late 1990s.

It uses an organic acid, primarily orange and yellow in color, to protect against freezing at higher temperatures than traditional antifreeze. It was introduced around 2003.

This kind of Antifreeze usually has an orange color. It is usually used for the dex air conditioning systems.

Can I Put RV Antifreeze in My Radiator?

You are not supposed to add RV antifreeze to your car radiator. This might knock out the car's engine. Radiators usually become extra hot when cars do too much work. They are instrumental to the proper functioning of your car, so you should be mindful of the kind of antifreeze you use.

Can You Mix RV Antifreeze With Water? 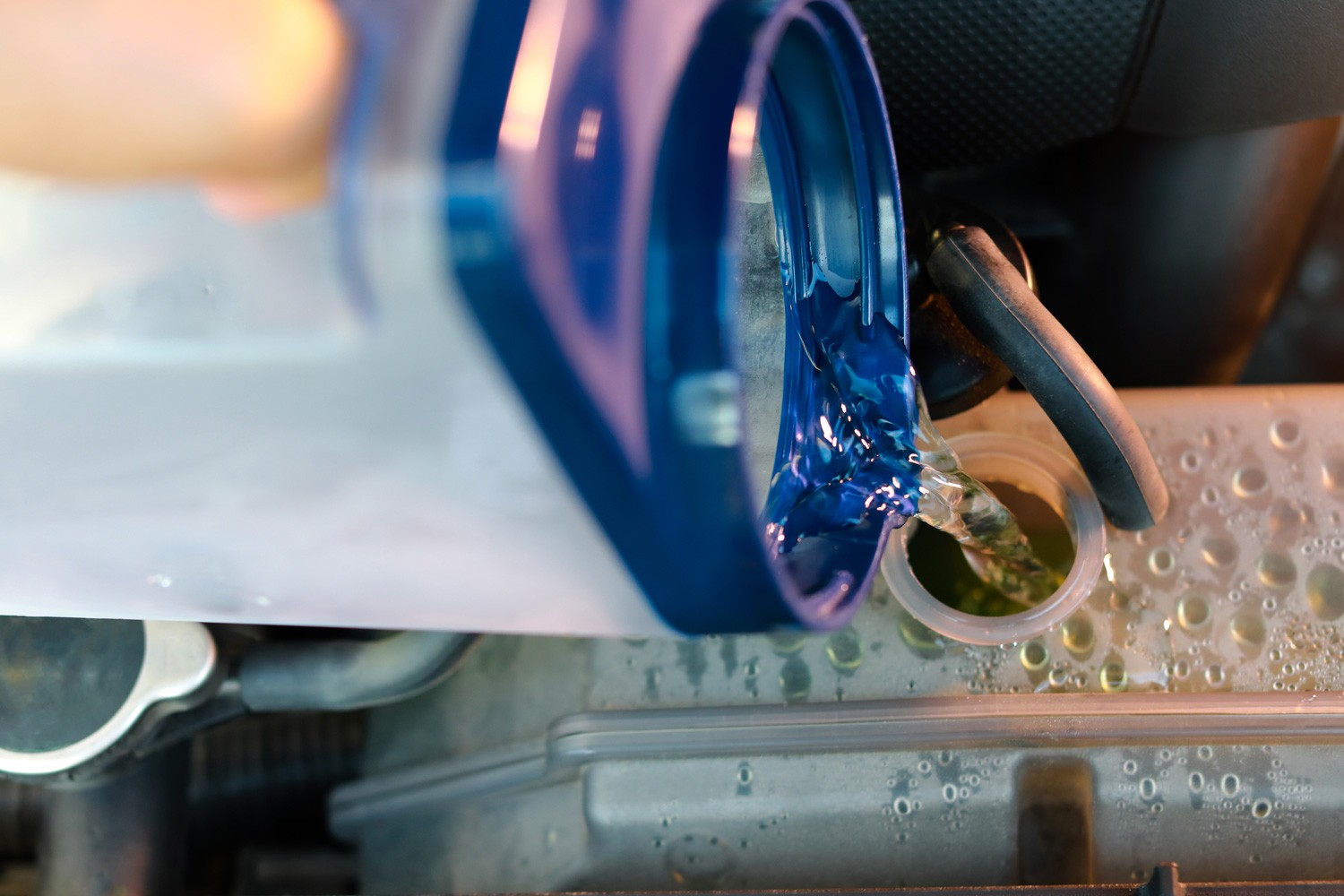 Experts say RV antifreeze should not be mixed with water, especially when you are planning to use it immediately.  The solution becomes unsaturated, making the RV antifreeze less intense for its primary duty.

Meanwhile, if you would still like to mix antifreeze with water, ensure you are mixing in the right proportion. Check the instructions to confirm how much water you will have to add to the RV antifreeze to be very effective.

RV antifreeze does not melt ice. The reason is that these are only made with substances that will protect the pipes against winter. Antifreeze lowers the freezing point of water or moisture and increases the boiling point of both.

Although some antifreeze like the RV antifreeze doesn't do this. The freezing point may be lowered, but the boiling point won't change. Hence, you will only have to wait to get your freshwater pipes and zinc to get thawed.

However, the RV antifreeze is also helpful in its specific way, including helping flush out remaining water or at least most in pipes.

Can RV Antifreeze be Used as Windshield Washer Fluid? 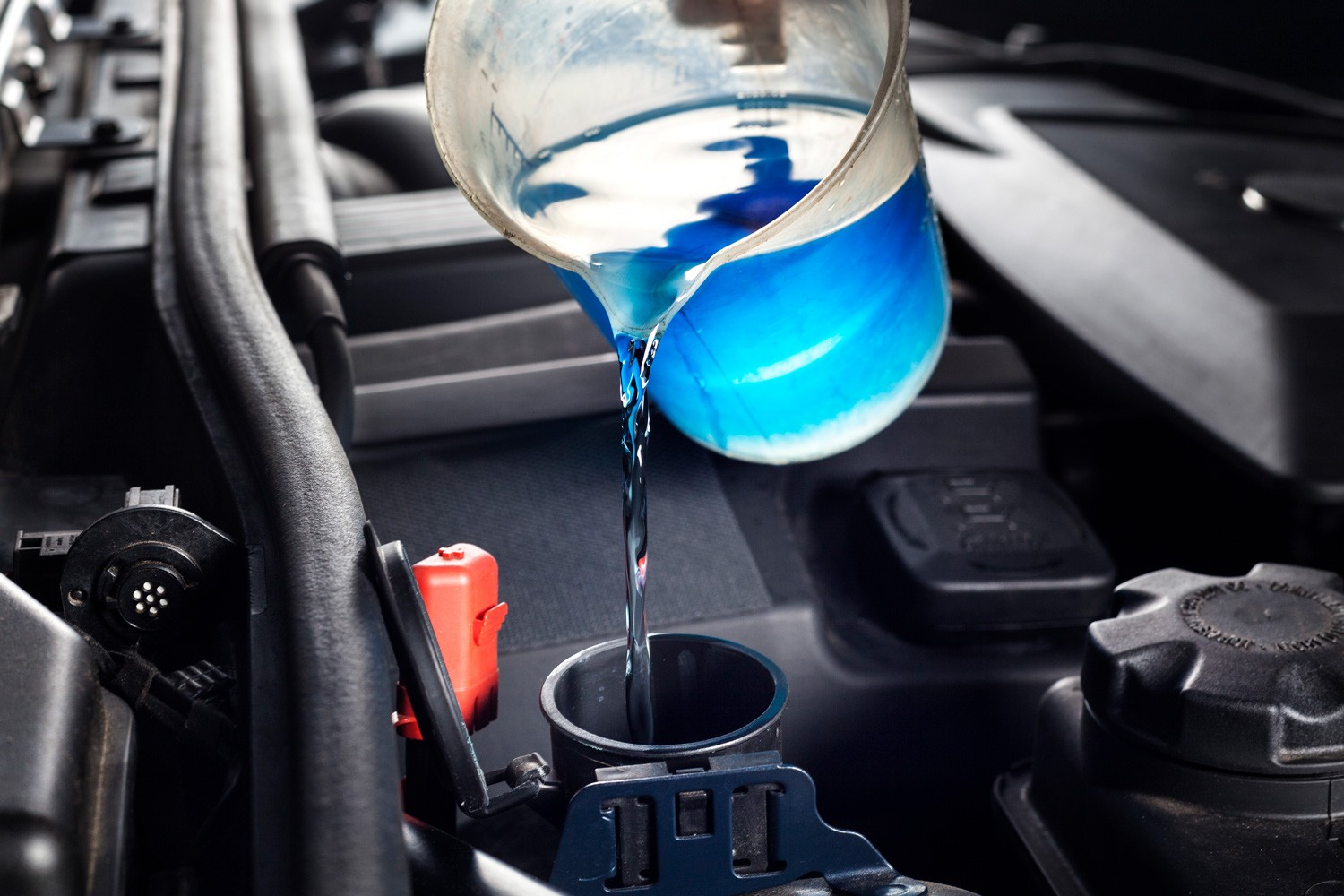 RV antifreeze can be used as windshield washer fluid under certain conditions. Most antifreeze contains corrosive chemicals. RV antifreeze, though a bit different, is not corrosive, but it can destroy your car paint if it is mistakenly splashed on it. This is because they are made of sticky oils and not chemicals.

Unfortunately, they are too hard to clean, leaving you with a permanent stain to deal with. If you can, mix the RV antifreeze with water and use a tiny proportion while cleaning your windshield.

Antifreeze contains chemicals mixed in adequate proportion to reduce the effect of very high or shallow temperatures. The RV antifreeze and car antifreeze as discussed in this post have different compositions and should not be used interchangeably.

To learn more about antifreeze, we recommend reading these related articles:

Where Does Antifreeze/ Coolant Go in Your Car?