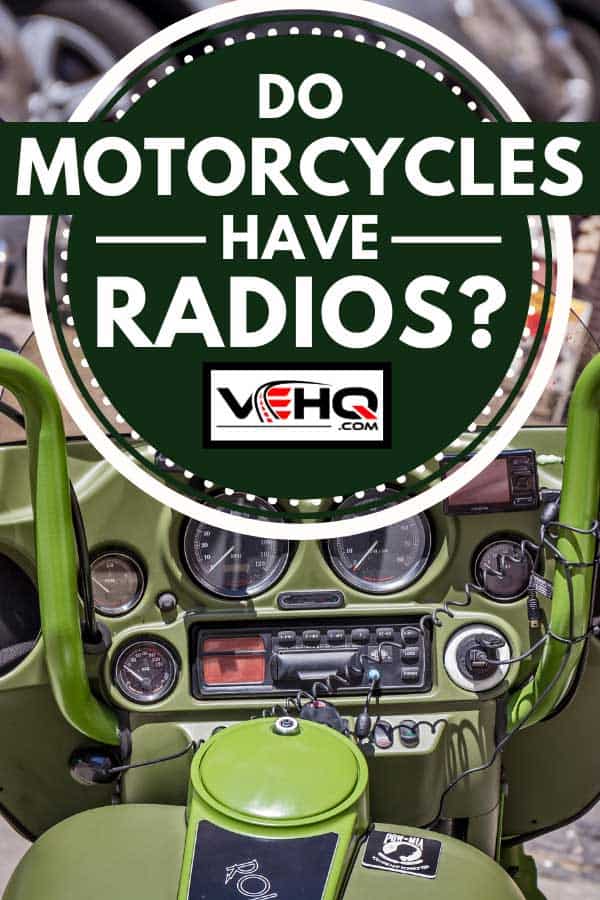 A few decades ago, anti-lock brakes and airbags were considered premium options for a car that have become the standard. The same could be said about the radio. You see radios installed routinely in golf carts, UTV’s and those cool Polaris Slingshots. Do motorcycles have radios? We researched this topic to find the best answer for you!

Yes, some motorcycles are available with stereo systems, including a radio. Harley Davidsons are famous for this feature. Most brands don't offer this as a default setting but you can buy a stereo system and install it.

The overall purpose and styling of most motorcycles do not work with a radio. Keep reading to find out more about why they do not, and what kinds of bikes are likely to have them.

Motorcycle Styles Vs. the radio

There are three styles of motorcycles that are common today. Only one of them is a natural fit for a radio. The big touring bikes almost beg for features the way choppers and sports bikes shun them.

In 1969, Easy Rider introduced chopper culture to America.  The whole point of ‘chopping’ a bike was to strip away the superfluous and piece together a unique machine. This homage to the way people put motorcycles together from whatever parts they could find makes for a utilitarian styling that leaves no place for a radio.

The same could be said for the modern sports bike.  On a bike designed for speed and handling, a radio almost would be out of place. Who cares about a radio when you have suspension to upgrade, engines to tune, and exhausts to rebuild? On the big touring bikes, however, it seems almost natural. On long rides, listening to your favorite tunes would make the drive pass quickly and the miles more enjoyable.  Plus, the big cowlings and large dashboards offer enough room to mount a radio and control panels easily.

Even with the styling and performance differences across each style of bike, there are options for each. It just depends on what the rider wants her open road experience to be.

Is It Dangerous To Listen to Music on a Motorcycle?

Distracted driving is a hazard no matter what vehicle is being driven.  This is the primary argument for restricting cell phone use while driving.  Listening to music and being distracted by operating the radio is not limited to motorcycles.

High noise exposure has the potential to cause long term hearing loss.  With motorcycles often generating 70-80 decibels of noise by themselves, adding music loud enough to be heard over the bike could push the volume to dangerous levels.

As with operating any motor vehicle, music can offer a higher level of enjoyment, help the driver focus, and, like a student studying to music, even increase decision making and problem-solving capacity.  But it can also add to distraction and overstimulation, which would make an already dangerous activity more so.  Only a responsible driver can answer that question for themselves.

How Do You Listen to the Radio on a Motorcycle?

There are two ways commonly used to play the radio on a motorcycle:

Just the same as a car or home stereo, the audio is played out loud in the mix of sounds around the rider.  Unlike in your car, these speakers are exposed and need to be protected from both weather and theft.  The greatest benefit of integrated sound systems is that it is always there when a rider wants it.

This used to mean plugging into the device but with the broad availability of wireless devices, it is often the same earbuds used off the bike or speakers integrated into the helmet itself.  The advantage of the private headsets is that they block the wind and exhaust noise so the rider can hear the audio clearly.

Unfortunately, this also blocks any audible traffic noise, sirens or horns and may create a hazard.  Legality should be another consideration.  According to thenewswheel.com, it is illegal to use headphones while driving in 9 states and restricted in 8 more.

What is the Best Motorcycle Radio?

Deciding on what style is best could rekindle the argument between the street bike or the sport bike, minimalistic chopper, or tricked out touring bike.  Regardless of what style of bike the radio is for, there are a few considerations when making a choice.

Ease of Use of the Controls

This consideration can have a major impact on rider safety.  For a motorcyclist, it is not only important to keep the hands close to the controls, but it is also critical that reaching said controls doesn’t force a change in posture or balance that could destabilize the motorcycle.

Having access to our personal library has so become common with media streamed straight to our phones, and a rider would not be any different.  As with car audio systems, the convenience of being able to play directions, call audio, and access audible commands would be a feature to look for in a sound system.

With not all bikes being kept in the garage and every rider getting caught in a storm at some point, having a system that can perform in the face of mother nature’s wrath is important.  This is not limited to rain.  It should include sun and heat as well as cold and ice.

Mounting Options and Ease of Installation

This is important both for securing the system when the motorcycle is parked but also a consideration if the rider doesn’t want holes drilled and paint scratched.

Regardless of the bike brand, picking a unit that looks like it belongs on the bike is critical for many riders.  An ultra-modern futuristic design would look out of place just as a salvaged, road damaged bolt-on speaker would look on a sleek, tricked out cruiser.

A sound system has to sound good when you want to listen to it.  The best system on the highway might be loud and obnoxious on the street.  Finding a system that is designed for the style of riding changes the enjoyment of the rider.

You can easily order a great stereo system for your bike on Amazon or another online site. Here are a few examples. Just make sure they are a good fit for your own motorcycle before placing your order.

Enjoy a full range of radio selections with this set of Bluetooth stereo speakers. For your added listening experience, the speakers feature crystal clear sound and high-performance bass. It's easy to install and comes with all the hardware that you may need.

Four gorgeous chrome speakers that you can mount anywhere on your bike (or ATV). Play your favorite radio stations or MP3 music directly from your phone via Bluetooth.

What are the Loudest Motorcycle Speakers Available?

When it comes to audio volume, bigger tends to be better.  Also, more voltage tends to increase the sound volume.  For cars, it means using trunk space and door panels to house speakers, amps, and additional batteries. At 1000 watts, the Boss system above is a good contender for the loudest speakers.

Regardless of the type of speaker, the quickest way to add volume to the stereo is to install an amp.  They don’t work with all systems, but if the volume is what is most important, this might be the trick to save a motorcycle owner from having to install a new system. Plus, an amp will also give a better sound quality overall and allow for more speakers.

Motorcycles embody a romantic place in America’s heart, and no romance is complete without a great soundtrack.  For many, it is the tink of the exhaust after the ride is over, or the rumble of a V-twin accelerating away.  For others, it is the high whine of a performance engine first crescendoing up on approach before fading away as the taillights shrink in the distance.  If that soundtrack includes music, there are numerous options on how to bring it along.

How to Tow a Motorcycle: The Complete Guide

How To Get A Motorcycle License In New Jersey