It seems as though every year, there are more onboard features for vehicles that roll off the showroom floor. Keeping up with all of the new offerings can seem overwhelming, let alone trying to keep track of which model vehicle has what technology. If you are considering a Buick Enclave for your family's next vehicle, you might want to know if you will be able to have an SUV with adaptive cruise control. We researched this popular model from numerous professional sources so that you'll have a definitive answer.

The Buick Enclave has adaptive cruise control available as an upgrade with its Avenir trim level. The remaining three trim levels do not have this option.

Now that we know the Buick Enclave only has adaptive cruise control for the Avenir trim level, we'll take a closer look at this feature and what Buicks come equipped with it. You might also be wondering if the Enclave has transmission issues or what is considered high mileage for a Buick Enclave. How well does the Buick Enclave hold its value? What's the worst year for the Buick Enclave? For the answers to these questions, and more, read ahead in this post to see what our research has uncovered. 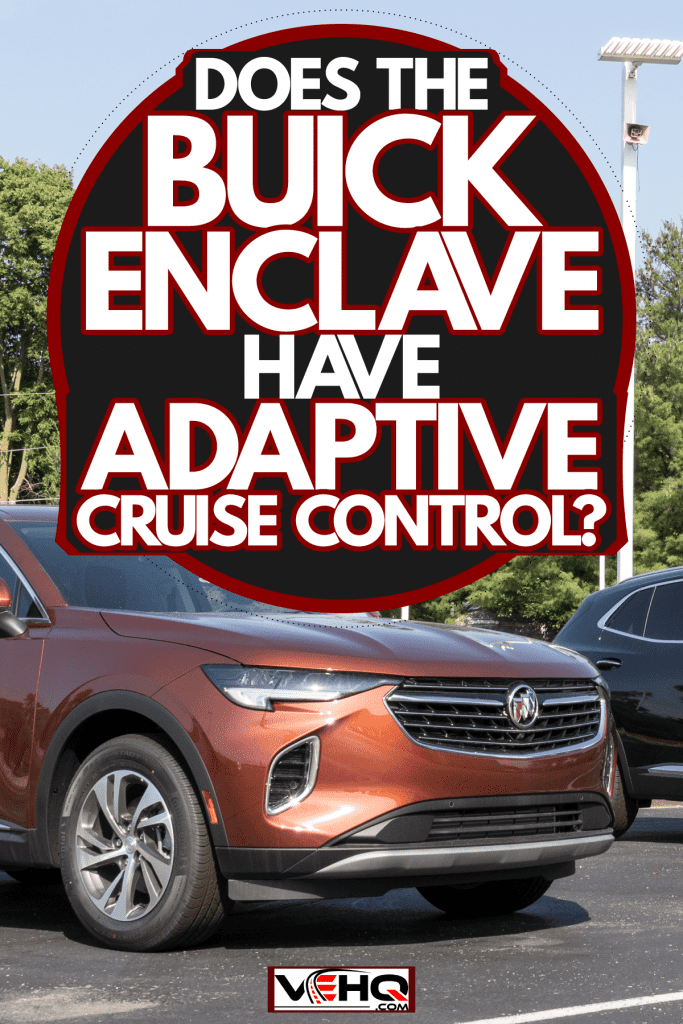 What is adaptive cruise control?

The adaptive cruise control (ACC) feature helps vehicles maintain a safe following distance while maintaining the speed limit. These safety adjustments occur automatically, so drivers don't have to. This technology uses cameras, lasers, and radar to build an image for the onboard computer, making it aware of how close other vehicles are to the car you are driving.

The adaptive cruise control system alerts the driver when approaching a car too quickly, flashing a warning on the onboard screen. Some models include an audible warning, like a voice or a loud beeping, when you are too close.

Top-of-the-line adaptive cruise control systems will automatically brake your vehicle, slowing it down to a safe speed if another vehicle cuts in front of yours or if you are rapidly approaching it on the roadway.

Do Buick Enclaves have transmission problems?

Many vehicle models have reported issues with their transmissions during certain model years, and the Enclave by Buick is no exception to this. The 2008 model year was by far the worst year for transmission issues, although there were other years that the Enclave was plagued with problems stemming from this vital component.

The cost to replace the transmission in the 2008 Enclave would top $3,500. These transmissions were failing very early into the life of the SUV, with the average failure standing at less than 90,000 miles. This is far under the industry average for a transmission's useful life, which typically will top 150,000 miles or more.

What's the worst year for the Buick Enclave?

While several model years have had more than their fair share of problems, the 2008 Buick Enclave has been by far the worst. According to Motor Biscuit, 2008 was definitely the most problematic.

Consumers reported multiple mechanical issues with that year's Enclave, ranging from minor to serious. The serious problems that were widely reported, we've listed below.

The 2008 Enclave had many defects within the engine itself. The engine block would develop holes, and the head gaskets would blow, resulting in motor oil spewing out of the crankcase.

As we noted earlier in this post, the 2008 Buick Enclave was notorious for transmission issues. The inability to shift into higher gears was a dominant complaint, as was the Enclave becoming unable to shift into "park" or "reverse."

These repairs were costly, to say the least. On average, it would run over $3,000 to take care of transmission issues with this model year.

Buick finally extended the factory warranty to cover the transmission to 125,000 miles, which did help some. But as many owners had their transmissions break at just over that mileage, many consumers were stuck paying the expenses out of pocket.

Almost as costly as the transmission in the Enclave, the power steering pump was a major source of contention for the 2008 Enclave. Power steering pump failures had owners forking over an average of $3,000 for the replacement. To make matters worse, some owners reported that they had to replace this pricey part more than once.

What is high mileage for a Buick Enclave?

As a whole, a Buick Enclave can be expected to last the consumer over 200,000 miles. But some consumers have reported that they have managed to keep their Enclave on the road for well over 300,000 miles.

Getting your Buick Enclave to reach either of those mileage milestones won't just happen automatically. In order to get the most out of your SUV, it's important to strictly follow a few guidelines.

Get your Enclave on a maintenance schedule

Pay close attention to the factory-recommended maintenance schedule that Buick has laid out. You'll find this in the owner's manual for the Enclave. While this isn't an all-inclusive list, many of the major items you should be servicing are:

Always refer to your owner's manual for a complete list of what needs to be maintained and serviced on a regular basis, and at what intervals these actions need to be taken.

You'll want to keep your SUV clean inside and out. Routinely wash your Enclave, removing buildup from underneath the vehicle and out of the wheel wells. This is especially important in the winter when road salt can cause corrosion over time.

Keep the interior clean. This will allow your filters to work at optimal levels. If you are a tobacco user, refrain from using these products in the cab of your Enclave. The smoke from cigarettes or cigars will damage the electrical components, resulting in costly replacements or repairs.

As you drive your Enclave, you'll become familiar with how it sounds, how it feels on the road, and what smells you can expect from the engine and the interior. Noticing any stark changes in these things can indicate that there are issues that need to be addressed.

If you hear a thumping, a whining, or a grinding that doesn't ordinarily happen, it might mean bigger problems lie ahead. Don't ignore them; get your Enclave in to get serviced immediately. It could mean the difference in catching a major failure before it actually happens.

Also, if the Enclave isn't driving the way it used to, or if you notice that the SUV is bouncing more, it's a sign that the suspension needs to be looked into. Don't delay in getting your Enclave into a mechanic if your senses tell you something has changed in the way that it drives.

How well does a Buick Enclave hold its value?

The Buick Enclave will hold more than half of its MSRP after a five-year period. This figure makes the Enclave in the top half of all others in its class for value retention.

How the Enclave has been treated and maintained will be a factor in this determination, as well as the number of miles that are on the engine. Higher mileage Enclaves, or models with damage to their interiors or exteriors, will be worth far under this calculation.

If you found this post on the Buick Enclave to be informative, we believe that you'll enjoy reading these posts about this popular car maker:

What’s the Best Oil for Buick Encore? [And How Often to Change It]

Buick Encore Not Accelerating – What Could Be Wrong?