If you invest a lot in your car, keep the maintenance up to date, and take care to make sure it lasts. A vital part of that is making sure to use the proper oil in your engine. If Castrol is your oil of choice, you may wonder if it contains zinc. We did the research and found some answers for you.

Castrol motor oil contains a zinc compound, zinc dialkyl dithiophosphate(ZDDP).  This oil additive provides better anti-wear protection in your engine, especially the high load areas like the camshaft and lifters. Current standards have reduced the level of this additive below what it was in the past.

Maybe you wonder if there is enough zinc in modern oils for your classic car engine or to break-in new engines. Why did ZDDP requirements tighten over time? Or maybe you want to know why it is necessary at all. We discuss all this in more detail below. 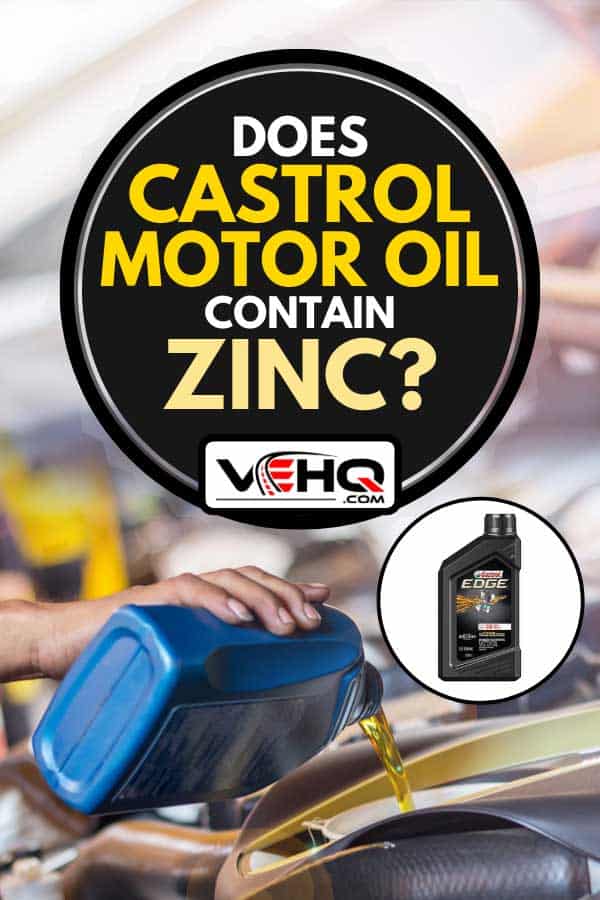 As stated above, Castrol contains an additive, ZDDP, which helps lubricate the engine parts under load. Modern oil standards from the International Standardization and Approval Committee(ILSAC) and the American Petroleum Institute(API) reduced the approved levels of both zinc and phosphor, which are in ZDDP. The current levels of zinc in most of Castrol's line of motor oils are usually in the range of about 800ppm in oils sold for gasoline engines, well below what motor oils had just a couple of decades ago.

But modern engines do not require the same level of wear resistance in the valve train that they did in the past, due to changes in design. If you have an older engine, with a flat tappet camshaft, or you have a modified modern engine with a much higher lift cam and higher pressure valve springs, the typical oils you find on the shelf may not provide the wear-resistance for which you are looking. In those cases, you may want to move to an oil with a higher ZDDP level.

Another situation where a higher ZDDP could also be necessary is for a newly-built engine. Some engines, when freshly built or rebuilt, require a higher level of ZDDP during the break-in period. Some even suggest a break-in level of 2000ppm or more. When this is the case, you will need to make sure your oil has the appropriate level of ZDDP. Most Castrol oils, as most GF-4 and GF-5 or newer oils, do not have the proper levels.

Why Have ZDDP Levels Been Reduced?

A significant reason for the reduction in ZDDP levels is newer, more stringent standards on catalytic converters. ZDDP in the oil reduces the effectiveness of the catalytic converter over time. The Environmental Protection Agency now requires that a catalytic converter last around 120,000 miles. The tighter requirements necessitated a change in the formulation of oils to lower the ZDDP.

Why Is ZDDP Necessary At All?

The ZDDP, or a similar compound, is there to improve the anti-wear qualities of the oil, especially during the break-in period. Without this, premature wear on a newly built engine's cam and lifters may occur. A lot of manufacturers recommend a higher level during this time. Some even recommend a break-in oil, such as these:

ZDDP works by creating a bond with the metal components when heated, forming a film between the two surfaces and reducing wear.

For engines in older cars, and for engines that are modified for high performance, Castrol makes Castrol Edge in the 5W-50 viscosity.With an elevated level of ZDDP, this oil provides the necessary additional protection for the flat tappet cam and lifters in older and high-performance engines.

What is Castrol Motor Oil Made From?

Castrol's conventional oil has a base of refined crude oil, with cleaners and additives mixed in.

Full-synthetic oils also have a base made from refined crude oil, but they refine the oil to a much higher degree, making for a more uniform molecule size. There are also additional additives that improve the properties even further.

A synthetic-blend is essentially halfway between. There is a percentage of conventional oil in it, mixed with the synthetic. This provides some of the benefits of the synthetic, but at a much lower price.

What Is The Difference Between Castrol GTX And EDGE?

The Castrol GTX oils are Castrol's line of conventional oils, while the Castrol EDGE is their line of full synthetic oils.

GTX High Mileage and GTX Ultraclean are synthetic blends, giving some of the advantages of synthetic oil at a lower price point.

Why Do Older Engines Need Zinc?

Zinc, typically in the form of zinc dialkyl dithiophosphate(ZDDP), when heated and put under pressure, creates a phosphate film that bonds to the metal parts, helping protect the components from wear. In older engines, especially engines with flat tappet or high lift cams and high valve spring pressure, this extra protection is crucial to preserving your vehicle's valve train.

What Level Of ZDDP Is Recommended For Classic Cars?

The various recommendations we found for the correct level of ZDDP for your classic car seem to agree that a level somewhere between 1000 and 1400 parts per million(ppm) is a good level to aim for. The most common recommendation was around the 1200ppm mark.

While breaking in an engine on a classic car, many engine builders recommend a ZDDP level of around 2000ppm. There is some evidence that ZDDP levels that are too high, those well over 1400ppm, for regular use can damage your engine. You should only use the elevated level of ZDDP during break-in periods, even on classic car engines.

Keep in mind, most current oils -- those with an ILSAC grade of GF-4 or newer-- have mandated levels much lower than this. The levels are sometimes as low as around 600ppm.

Castrol recommends their Castrol EDGE 5W-50, which has a higher level of ZDDP at 1250ppm.

What Motor Oils Still Have Zinc In Them?

Many or most motor oils still have at least some zinc through the compound ZDDP or similar. But because of new oil standards, that level may be low. If you have a high-performance engine or a car made before the early 1990s, you may want an oil with a higher ZDDP level.

The good news is that there are still some oils out there for your car. We found these examples on Amazon:

When people refer to the zinc levels in oils, what they are usually referring to is zinc dialkyl dithiophosphate(ZDDP), which is present in Castrol. If your engine is a high-performance engine with a flat tappet cam, or if your car was made before around 1996, you will likely want an increased ZDDP level, which is found in Castrol EDGE 5W-50. This will provide an increased level of ZDDP to help protect your engine.

Why Do Cars Need Oil? [And What Happens If You Don't Change Oil?]

Does My Car Need Synthetic Oil?

What Happens If Your Car Runs Out Of Oil While Driving?