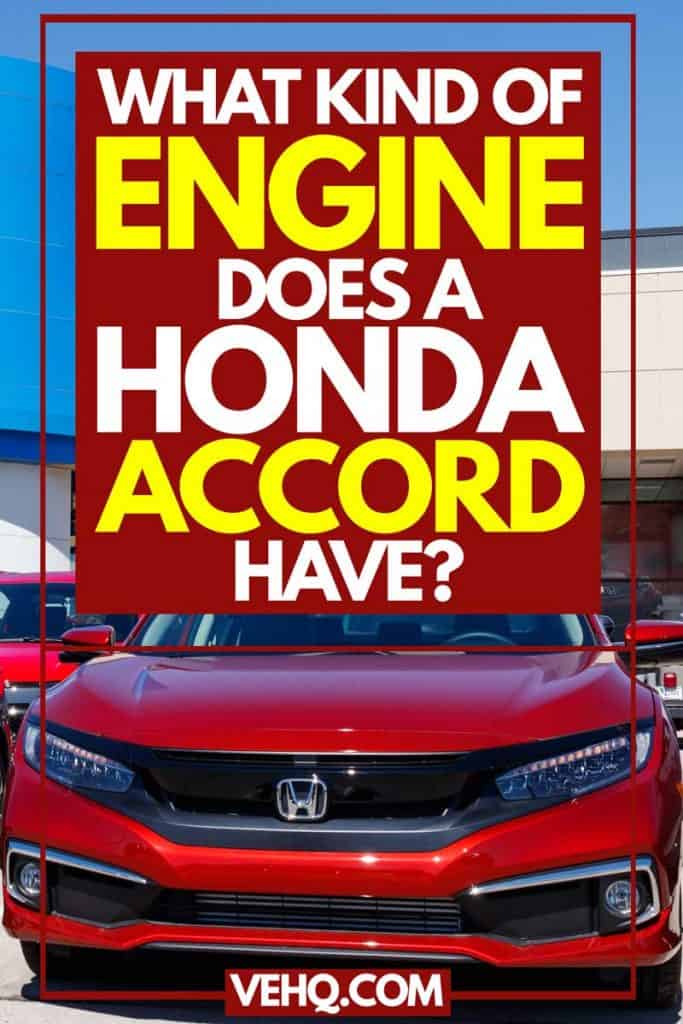 Since its debut in 1976, the Honda Accord has become one of the most recognizable vehicles on the road. It started as a compact sedan but grew over time into an intermediate sedan, with the Civic taking its place in the compact category. The car is currently in its 10th generation, with the coupe version recently discontinued. The Honda Accord has found itself on the 10 Best List of Car and Driver an astonishing 33 times. This may leave you wondering, what kind of engine this incredibly popular vehicle has in it?

The 2020 Honda Accord comes with several different trims and, naturally, there are a few different engines that come in each. The standard LX model comes with a 1.5-liter, 4-cylinder VTEC Turbocharged engine. The Sport trim comes with a slightly larger 2.0-liter turbocharged engine that produces 252 horsepower. There is also an available option for a hybrid engine in the top tier versions.

Each of these engines has different available horsepower and transmissions available. Keep reading for all of the details.

What Kind of Engine Does a Honda Accord Have?

The type of engines available in the 2020 Honda Accord depends on your trim selected.

This car comes with a 1.5-liter, 4-cylinder VTEC Turbocharged engine. There is an option available for Continuously Variable Transmission (CVT) or 6-speed manual transmission. The engine produces 192 horsepower and 192 pound-feet of torque. It is one of the most fuel-efficient engines in its class, achieving 29 miles per gallon in the city and 35 miles per gallon on the highway.

When you put your foot on the gas, the engine produces a deep, rough sound and you can also hear the turbo and how much energy is being produced. In the CVT model, the engine stays at a constant 6,000 RPMs as you accelerate. From inside the cabin, the engine noise is quiet but loud enough that you can still feel the power.

This trim comes with a slightly larger 2.0-liter turbocharged engine that produces 252 horsepower. There is also an available option for a hybrid engine in the top tier versions.

How Fast is a Honda Accord?

The model that you purchase will impact the answer to this question.

The estimated top speed of the 1.5-liter engine is 155 mph, although it is doubtful that you would want to take the car up to that speed. The 2.0-liter can more comfortably get to that speed, and would probably top out closer to 170 mph.

Does the Honda Accord have a V6 Engine?

No. The Accord used to come with an option to get a V6 engine, but that is no longer available. That is not to say that the speed and power of the vehicle suffers, Honda has managed to produce more efficient engines than ever before, creating more power with smaller engines.

This trend is not specific to Honda. As engine technology is improving, all engines are getting smaller. There are plenty of reasons to want fewer cylinders in your car, especially if it is not just a weekend car. For a day to day car, fewer cylinders produce less vibration under the hood which is much better for wear and tear and longevity.

Where the turbo used to be a feature you would only usually see on sports cars, more and more companies are realizing the value of utilizing turbos in their engines. They are able to produce significantly more power without needing to make the engine bigger. This allows for a situation like the Accord. They can downsize the engine from a V6 to V4. However, they do not need to sacrifice any power. And the best part is, the fuel economy improves significantly.

How Fast is the V6 Honda Accord?

It was discontinued after the 2016 model, but if you are interested in purchasing a used Honda Accord with a V6 engine, you can expect something slightly more powerful than the turbocharged V4 engine.

The V6 engine produces 278 horsepower. The result is a slightly louder and more powerful engine, but nothing significant. In terms of performance on the road, you would hardly be able to tell the difference between the V6 engine in the 2016 model and the 2.0-liter V4 engine. The V6 engine is probably louder in the cabin.

What Engine does the 2018 Honda Accord Have?

2018 is when Honda launched the new generation of the Honda Accord. Everything is written above regarding the 2020 model is the same engine available in the 2018 model. Any tweaks that were made were very minor.

What Engine does the 2010 Honda Accord Have?

If you go back a decade you will see somewhat similar specs with the engine when compared to the 2016 model or the current generation.

There are no significant changes between the two models. 2018 was the first year of the new generation, they have not made any notable updates to the 2020 model.

Improve Engine Performance Over the Years

Over the years the Honda Accord has always been reliable and a go-to option for so many people looking for a mid-size sedan. That is one of the reasons it’s found itself on the Car and Driver 10 Best list 33 times. It has gone through so many different incarnations, 10 separate generations of the same vehicle.

The VTEC technology that you can find in all Honda vehicles has continued to grow and improve over the years. What we are seeing now is a trend in which Honda is able to continually shrink the size of their engines without needing to sacrifice power.

The engine in the Honda Accord is one of the best engines Honda makes. It is a perfect balance of power and efficiency. When you look at a model like the Odyssey, you see an engine that puts out 280 horsepower, mostly because it needs to move around such a big vehicle. However, the Odyssey only averages about 23 miles per gallon. On the other hand, the 192 horsepower V4 engine found in the Accord produces 192 horsepower, more than enough for a car of its size, and averages nearly 33 miles per gallon.

If you are still someone who appreciates a larger engine, you can still get your hands on a V6 Honda Accord pretty easily on a used car website or in a used car lot. It is important to note that Hondas retain their value quite well, so if you find a V6 2016 model, for example, it will still probably be around $14,000 to $17,000. Of course, that will depend on the miles the car has and the condition it’s in.

Even going back to the decades-old models of the Honda Accord, you always find quality engines. That is one of the reasons why you so frequently see Honda Accords from the 1990s driving on the road and running just fine. If anything, the quality of the Accord engine is even better now than it was then.

Want to know the trim levels of the Honda Accord? Click here!